By far one of the most beautiful natural attractions in the world, these falls which are located on the border of China and Vietnam are well worth the arduous journey required to reach them.

Ban Gioc Falls are in the middle of no-where which makes them a little difficult to reach. With the right information however (which I am about to give you) reaching the falls is definitely possible and will probably one of the highlights of your time in Vietnam.

Getting from Hanoi to Cao Bang

We caught the overnight bus to Cao Bang from My Dinh bus station which is about 20 minutes outside of the old quarter in Hanoi. A taxi to get you there from the old town should cost roughly $6. The bus leaves at 8pm but try and get there by 6.30 to ensure you have enough time to navigate your way around the bus station because its huge and chaotic. Make sure you have where you want to go written on a piece of paper to make your negotiating attempts easier. The bus costs 200000 dong one way. If you book it at a travel agent in Hanoi it will cost you 450000 or higher (which may include a transfer to the bus station from your hostel but as the taxi only costs $6 its hardly worth it.) The bus trip takes 10 hours so you should arrive in Cao Bang at around 5am. It'll be dark and you'll be disorientated so make sure you have the location of the local bus station open on maps.me (or pre-saved on your phone).

Getting from Cao Bang to Ban Gioc

The buses that go to Ban Gioc waterfall should leave on the hour from the bus station but ours was running very late and no-one spoke any English so we honestly had no idea what was going on. The only reason we knew we were on the right bus was because it said Ban Gioc on the front and even then we weren't too confident. The bus was small, fitting about 13 passengers and cost 70 000 one way pp. I still had pretty bad food poisoning so I wasn't feeling my best and was happy to get going and have some fresh air blown on my face. The drive took us out of the fog of the town and into one of the most beautiful landscapes I have ever seen. Reminiscent of misty avatar-like mountains and huge expanses of winding green rivers and roads. I had my head out the window the entire way and was incredibly content. The drive should take just under 3 hours.

Some people opt to hire a motorbike from Cao Bang and do the drive to the falls themselves but because I was sick and we were a little unsure of our surroundings we stuck with the bus. Next time I would get a bike as the landscape we drove through was so magical and being completely surrounded on a bike whilst also being able to stop to take it all in whenever you wanted would have really made it.

If you do decide to hire a bike you'll have to wait till it gets light and the shops open meaning you wont be able to set off until around 7 30. The bus station is on the opposite side of the bridge to the main town so cross the bridge and turn left and you'll find several signs advertising motorbike hire. The cost should be around $6 per day. There are petrol station dotted continuously along the road there (I saw at least 3) so don't worry about running out. Gloves are a must as it gets pretty cold in this region especially in the morning and evening and you'll be relying on your hands to keep you going.

Getting back to Hanoi

The bus back to Cao Bang  from the falls leaves at 40 past from the top entrance to the falls. We accidentally got the 1:40pm one instead of the 2:40pm because of the time difference at the falls. All the buses back to Hanoi leave Cao Bang around 8pm and they all cost the same and provide the same service so don't worry about not getting a seat. Just turn up at the bus station at 7pm and pick a bus. There are several cafes on the main side of town that have wifi and a bathroom so after we got back from the falls we sat in one and used the internet while we waited for our bus.

You don't need more than one day in Cao Bang as the town itself is very average and the waterfalls are really all there is to see but that being said I think they were my favorite part of Vietnam and although they are pretty out of the way they were worth the trip 100%. 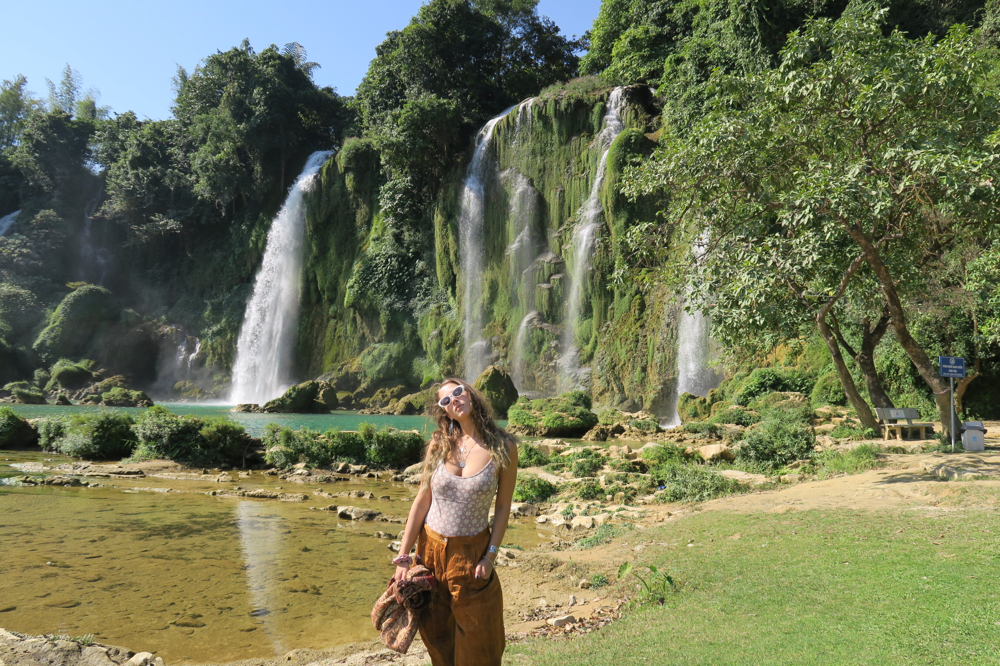 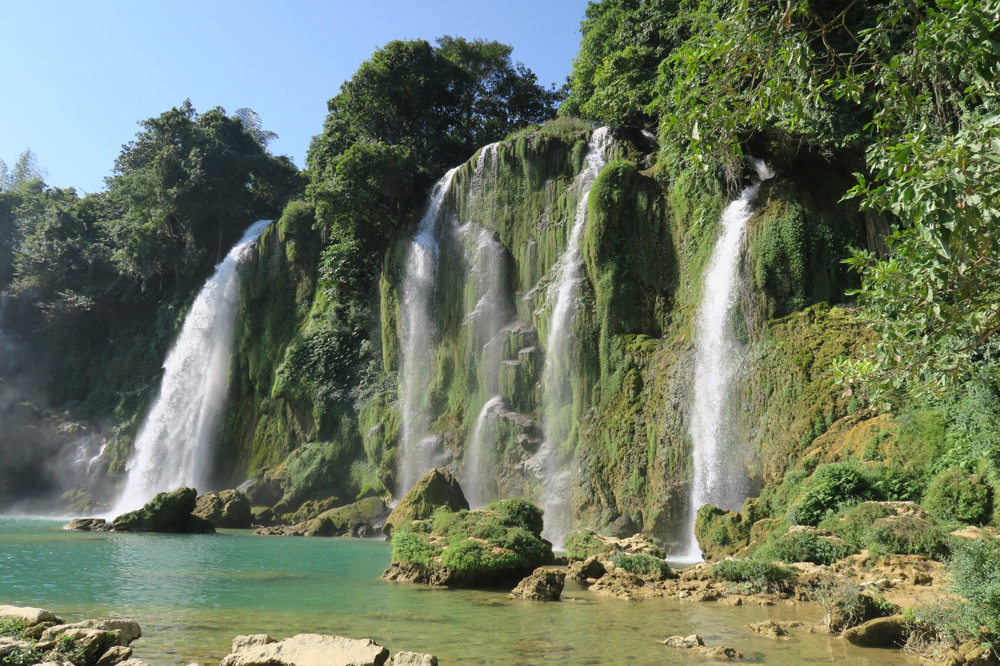 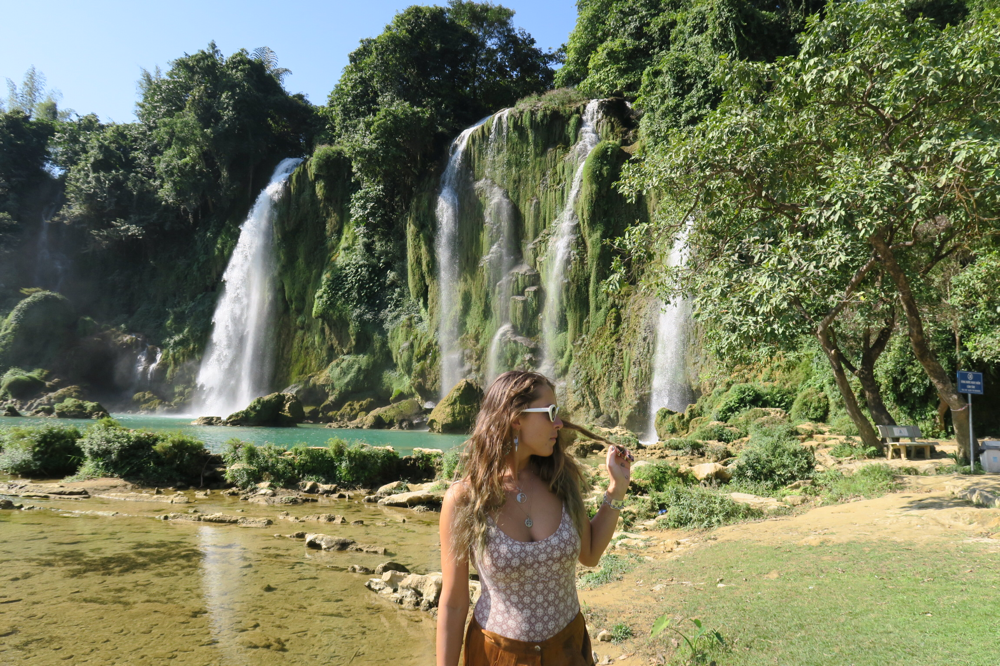 Entrance to the falls is 20 000 per person which you pay after you get off the bus. We had perfect weather with clear skies and warm sun so we could have spent all day here. Be aware that there is a time zone change when you reach the falls as you cross the Chinese border. Our phones moved forward an hour without us being aware of the time zone change and so we left the falls an hour earlier than we needed to because we didn't want to miss our bus back to Hanoi.

There is a secret path in-between the 2 falls that goes under and around a wire fence and at the top is the most incredible view of the main falls. Your not actually allowed to go up there so make sure the guards patrolling the area aren't around when you attempt to get up there. They wont do anything but blow their whistles at you but its better to avoid being caught. You aren't allowed to swim here either as the other side of the river is the Chinese border and there is little security. Seeing as it wasn't stinking hot this wasn't too big of a deal for us but i'm still sad I didn't get to cross into China and see the falls from the other side. (they are known as Detian Falls from the Chinese side and the picture I've seen of the view are mind blowing. Because I didn't get to cross the river I now have to go back via China to see them from that side!! ): 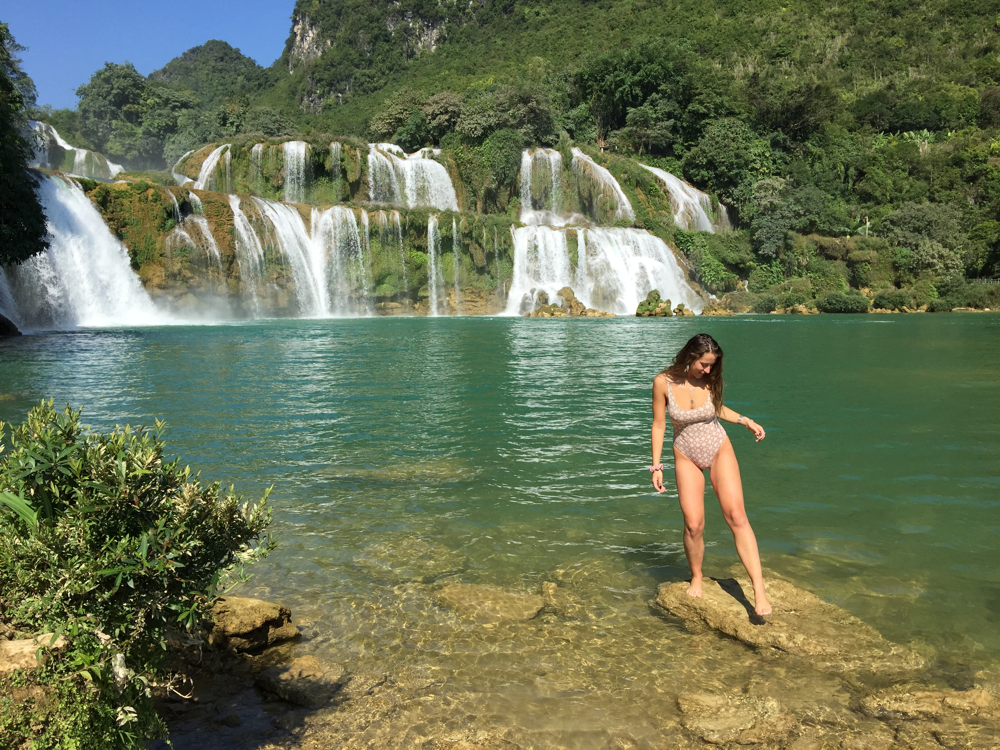 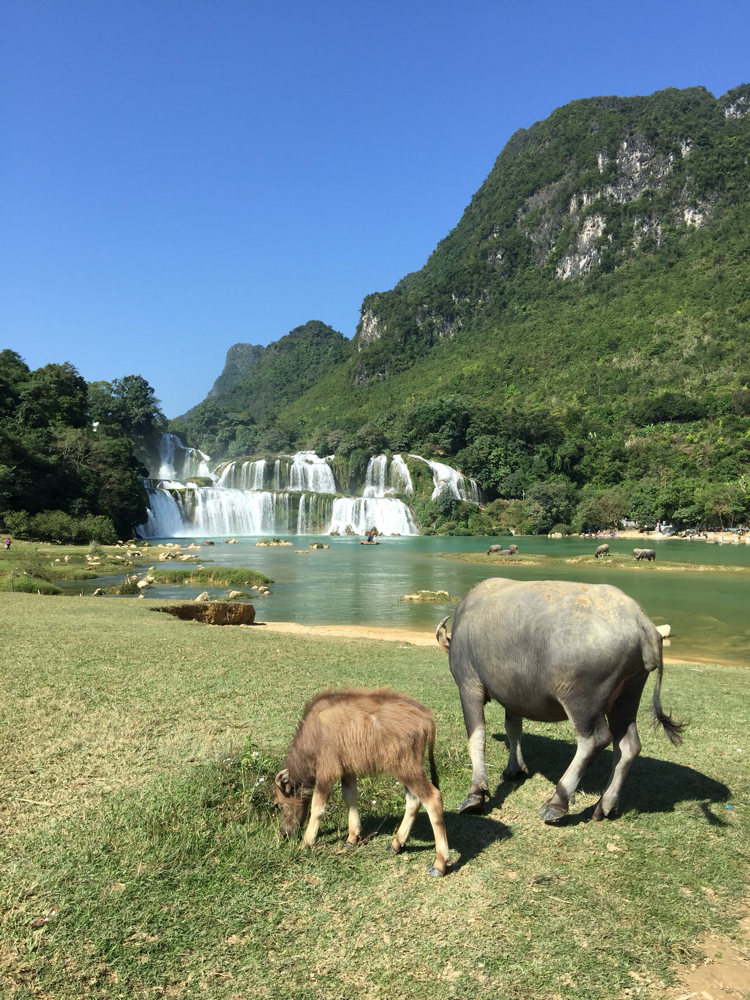 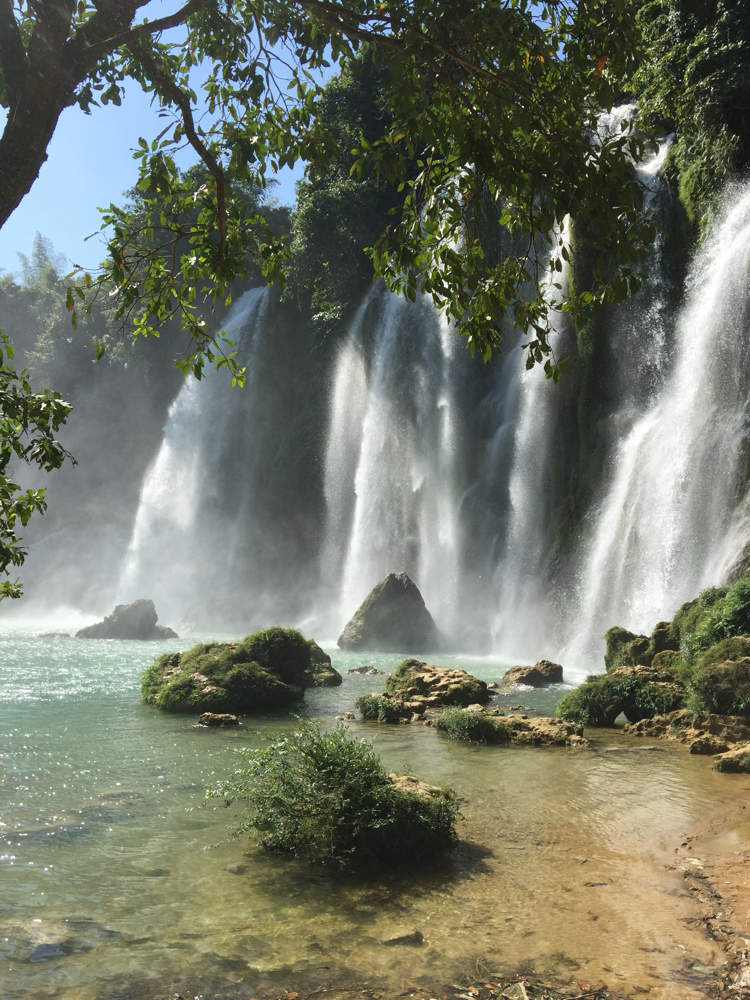 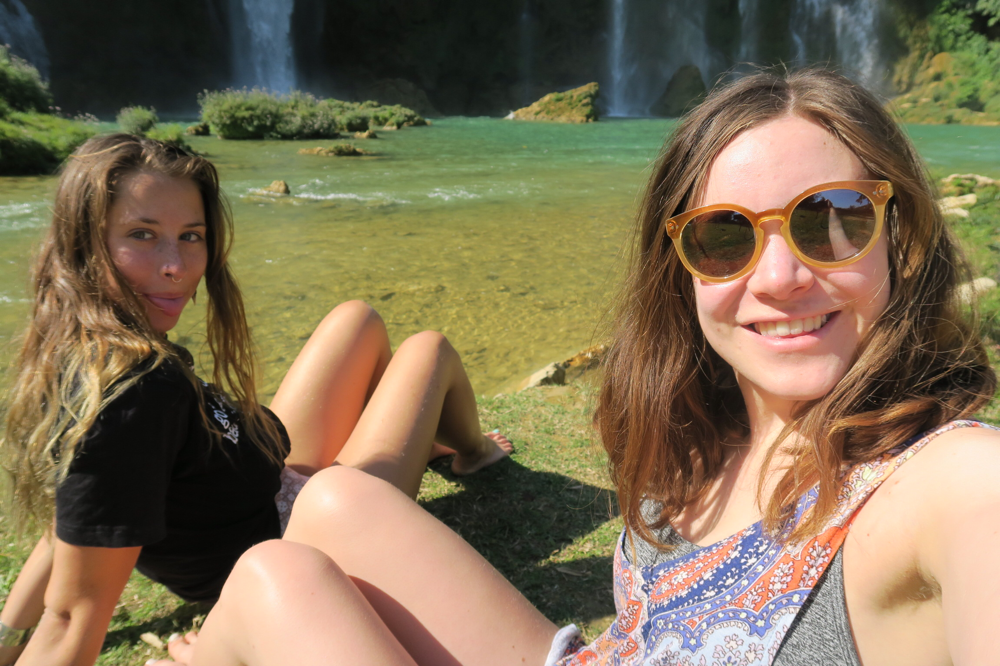 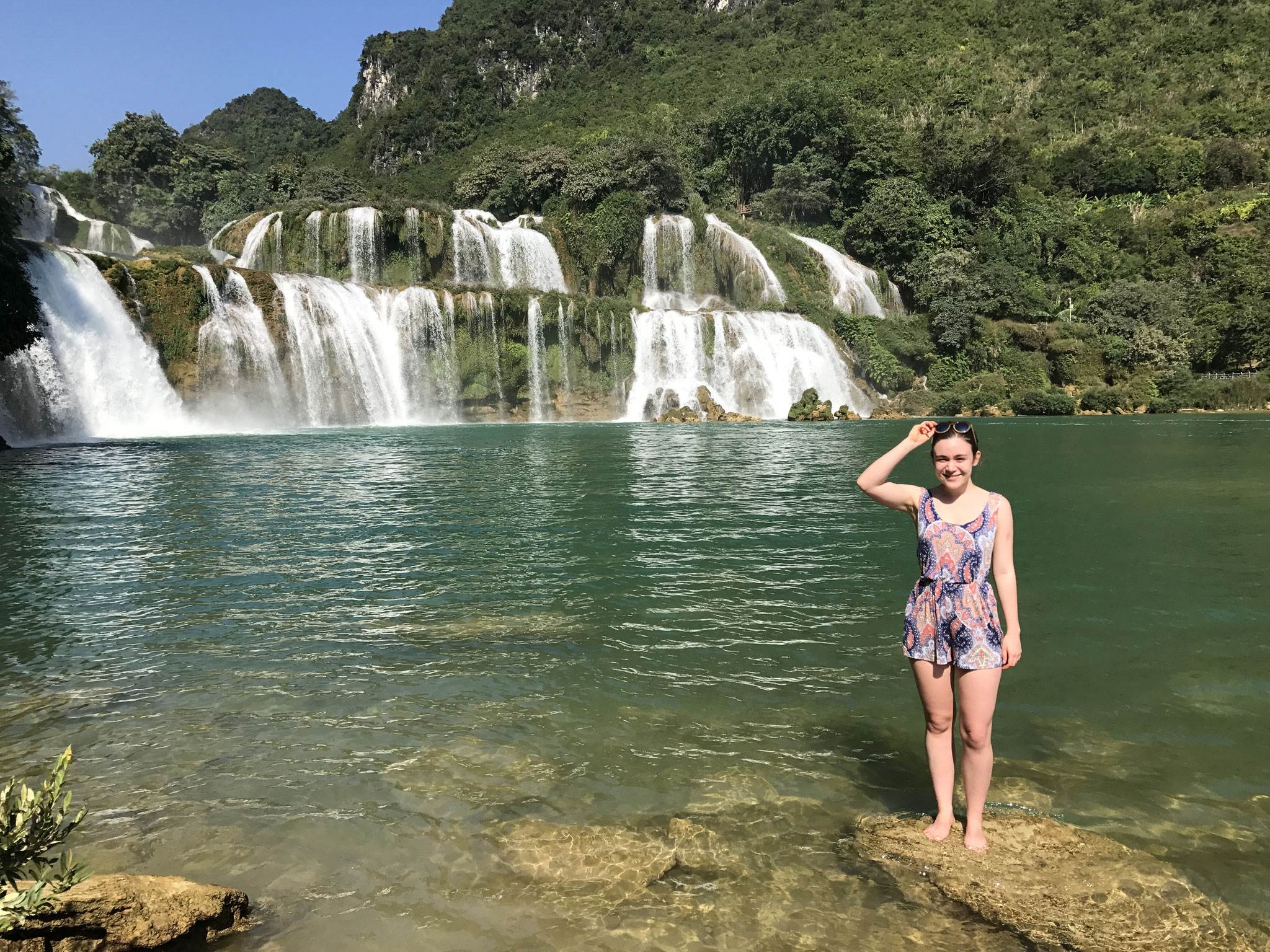 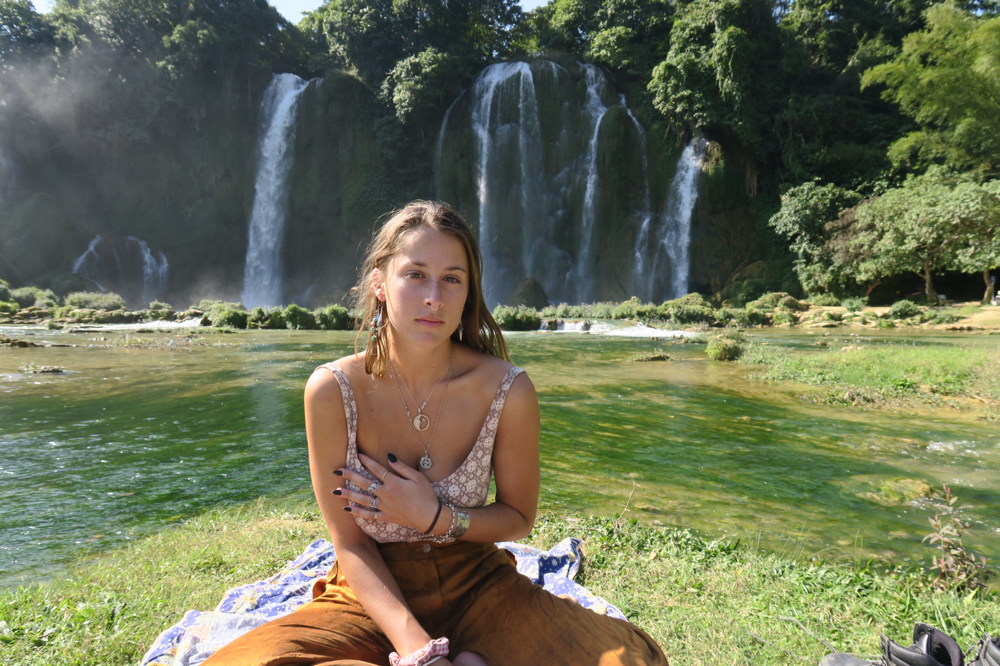 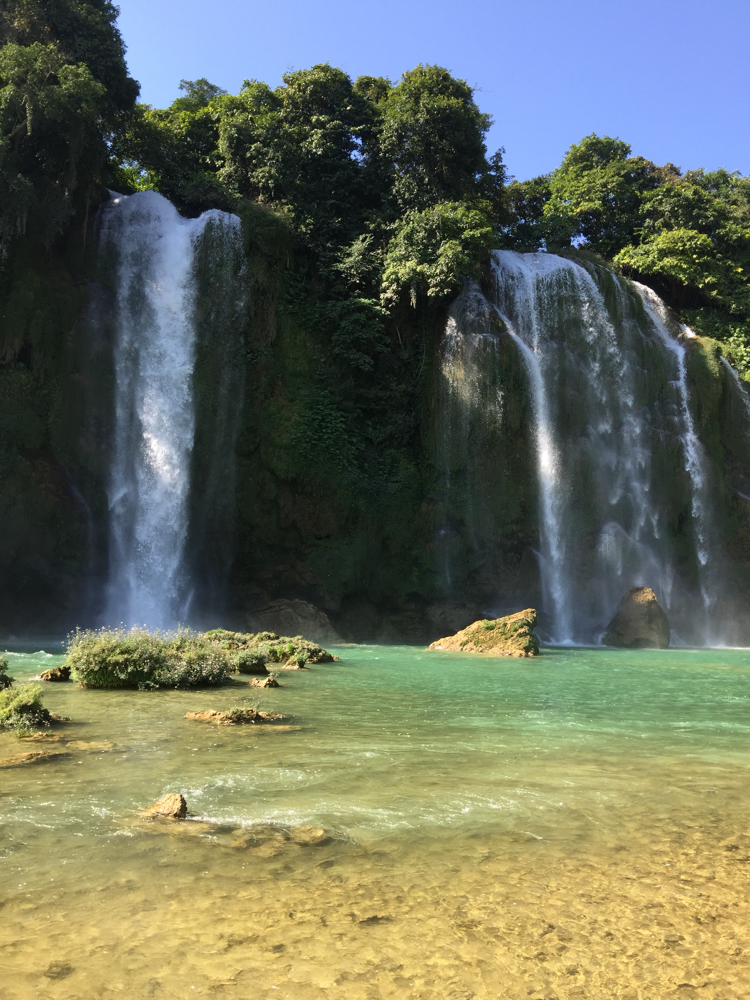 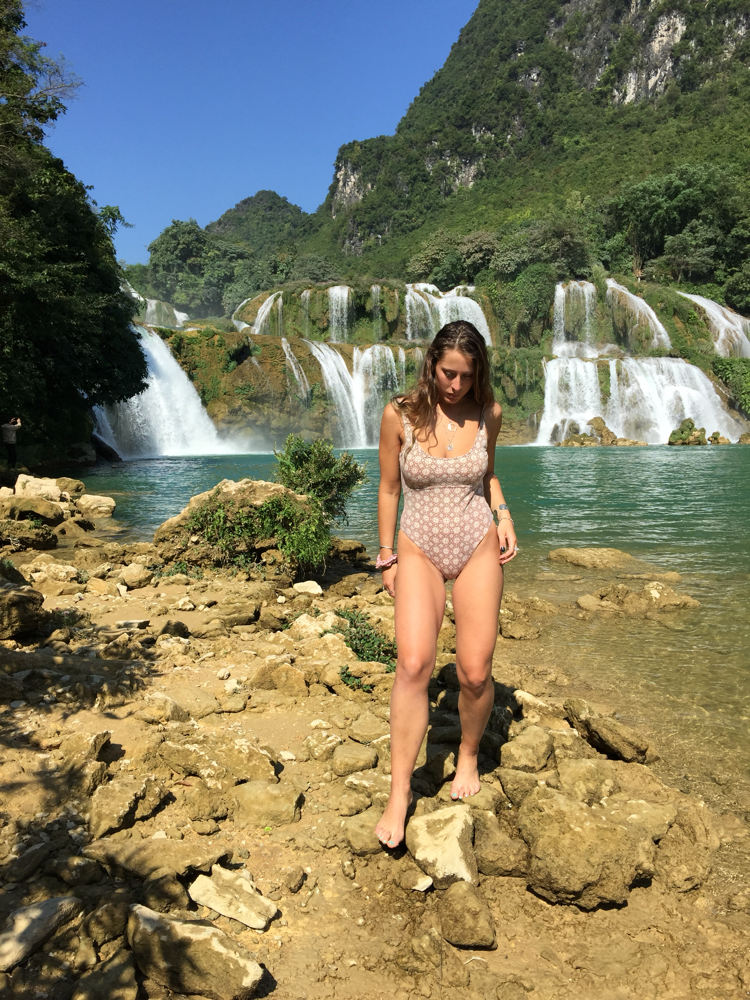 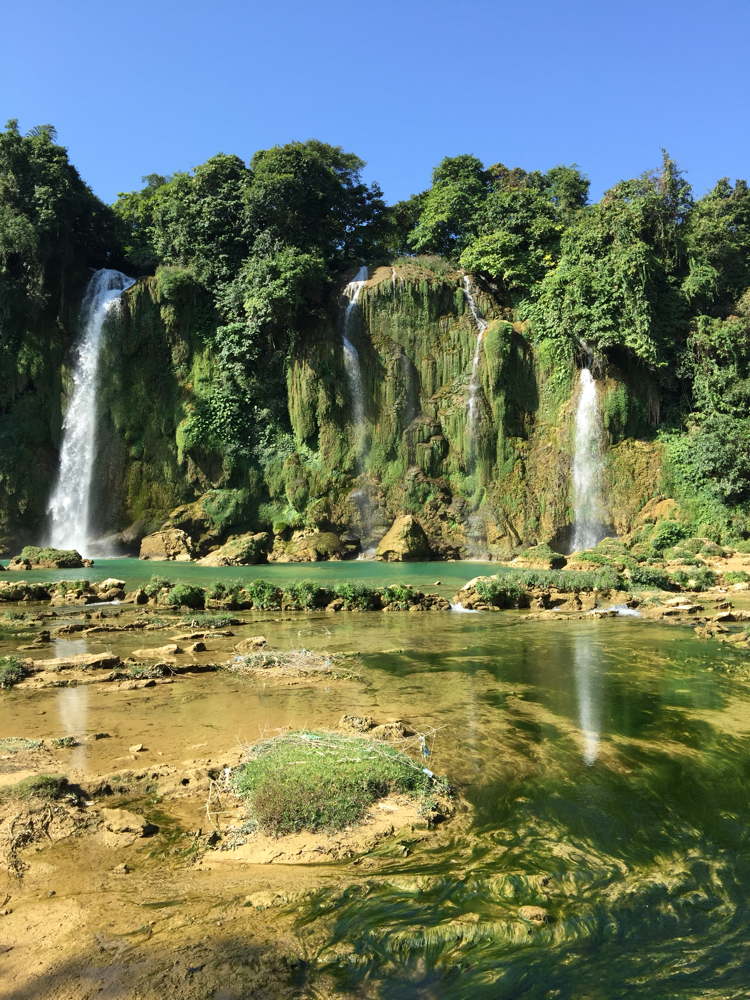 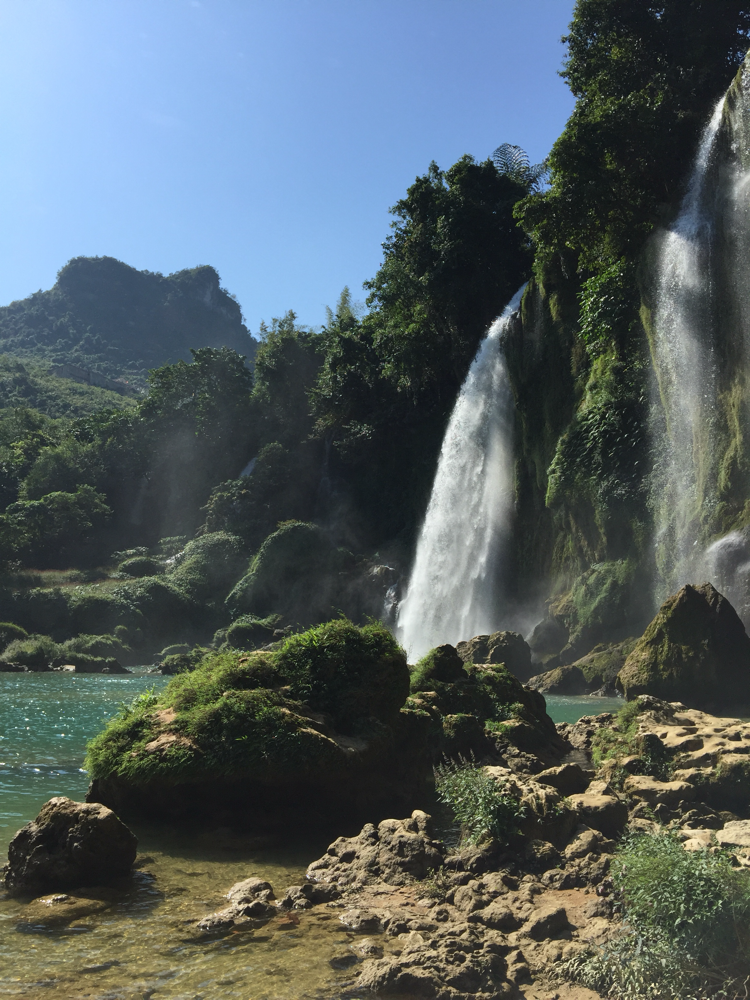 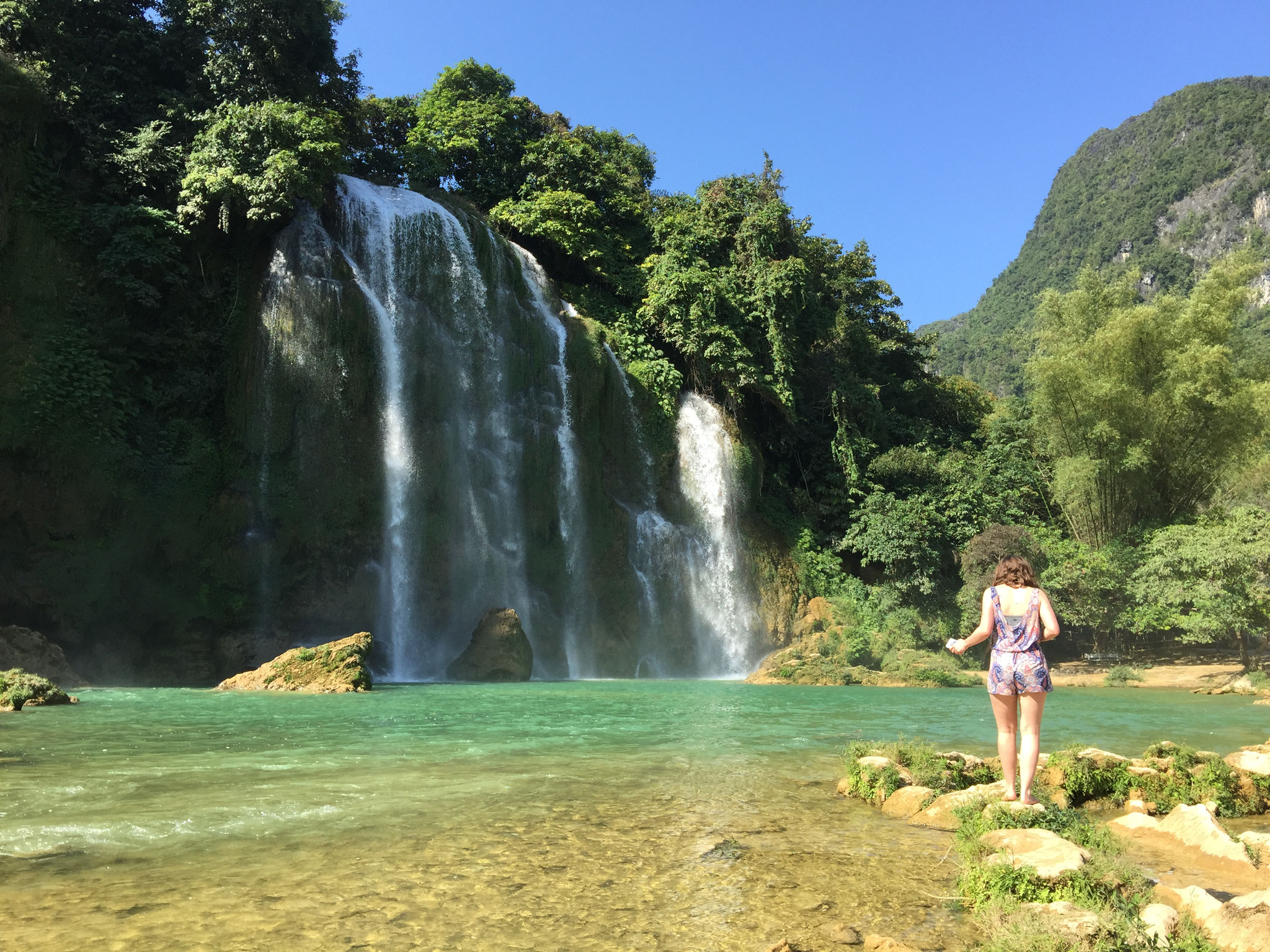 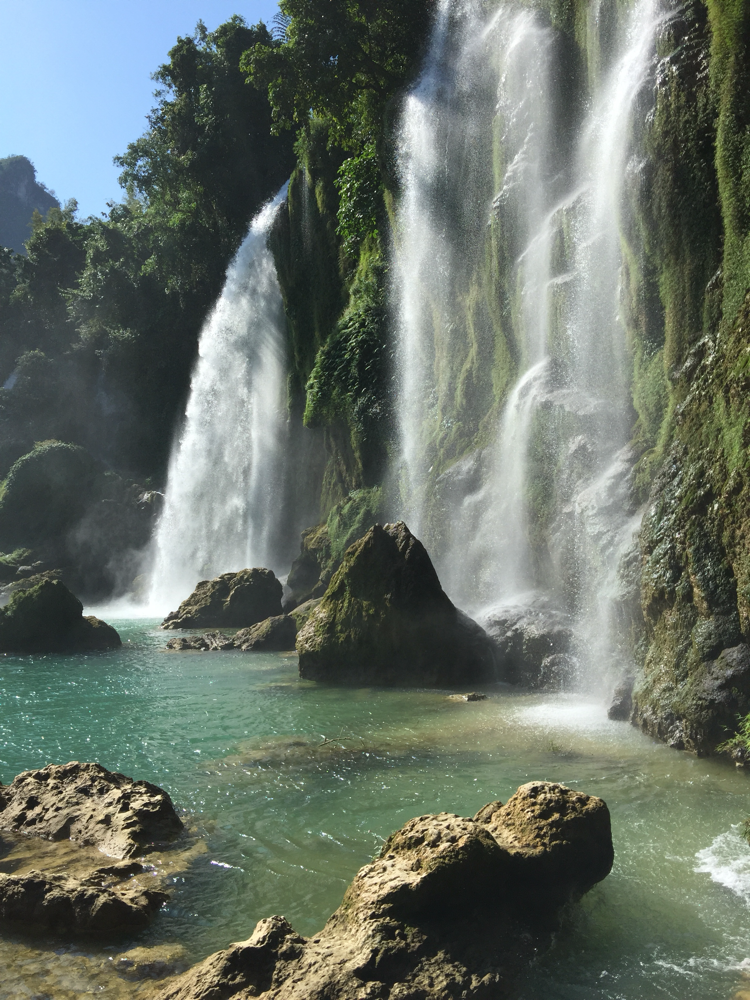 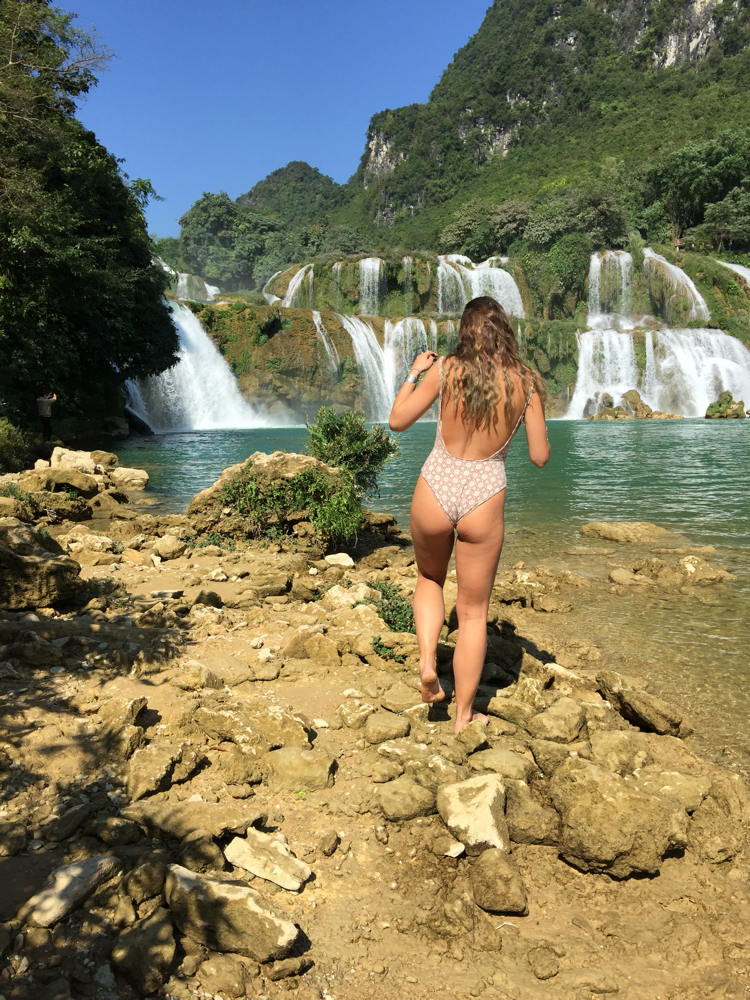 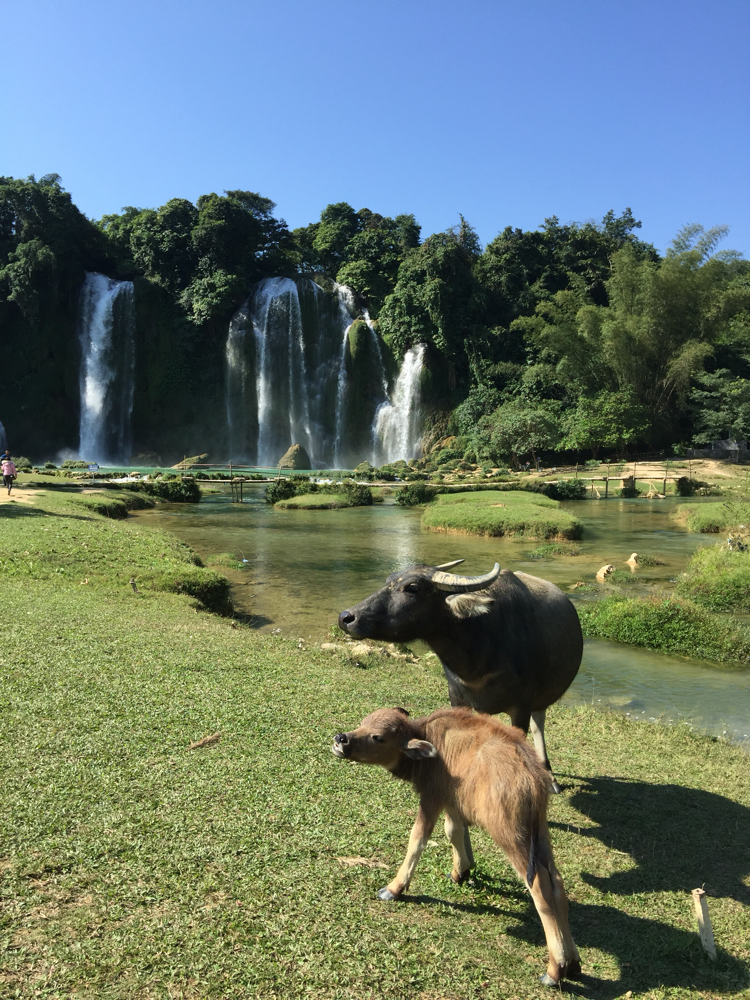 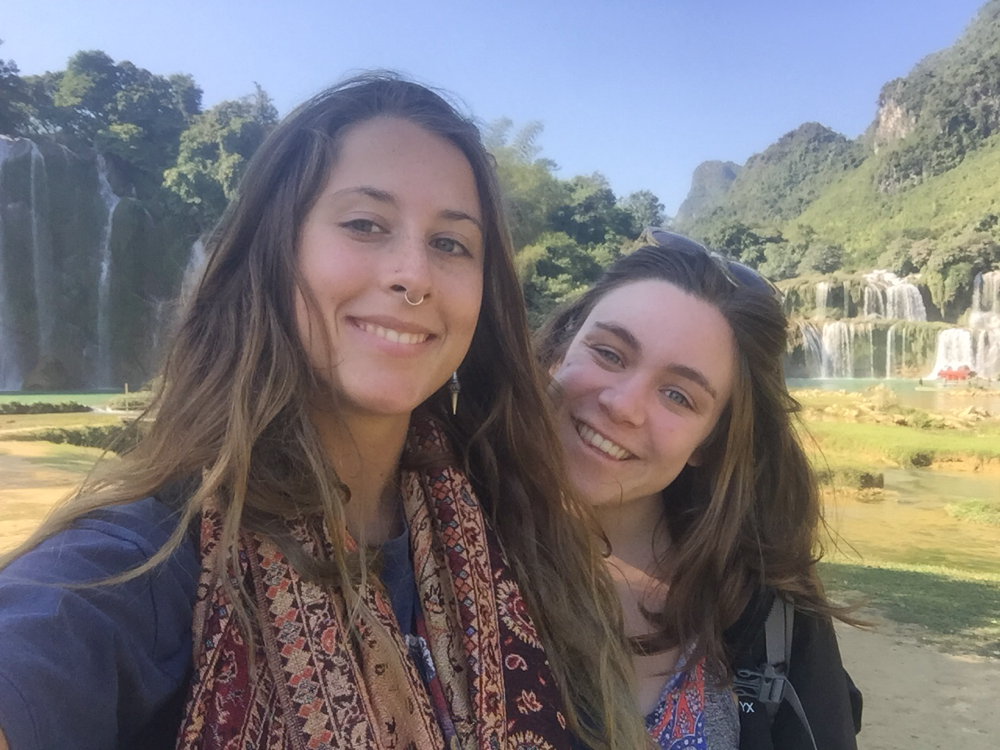 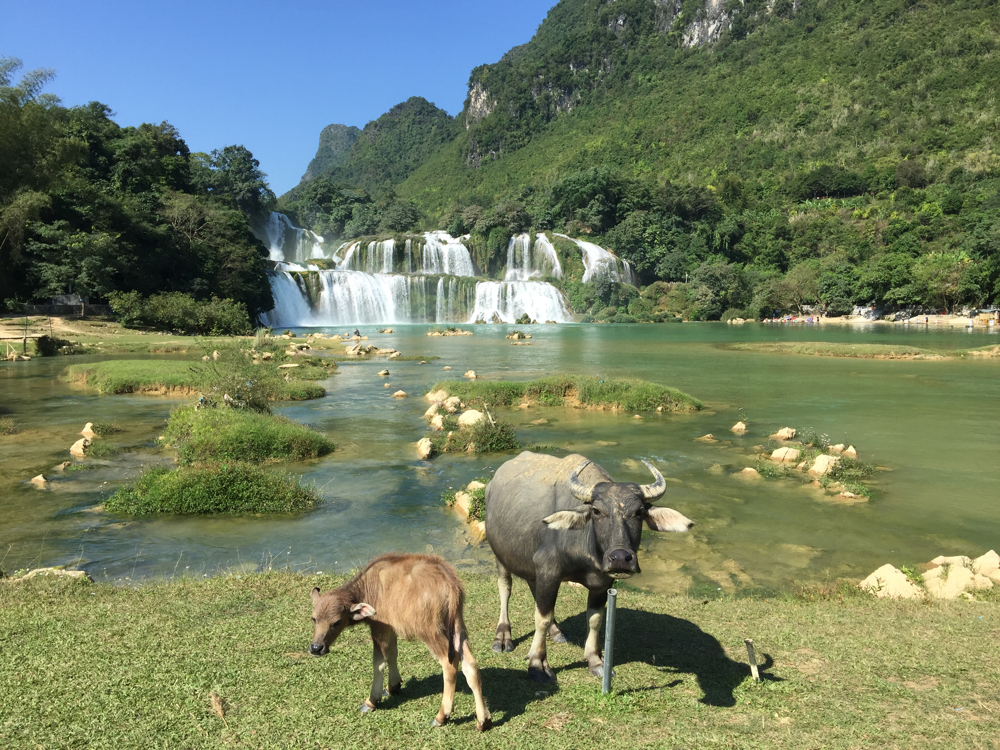 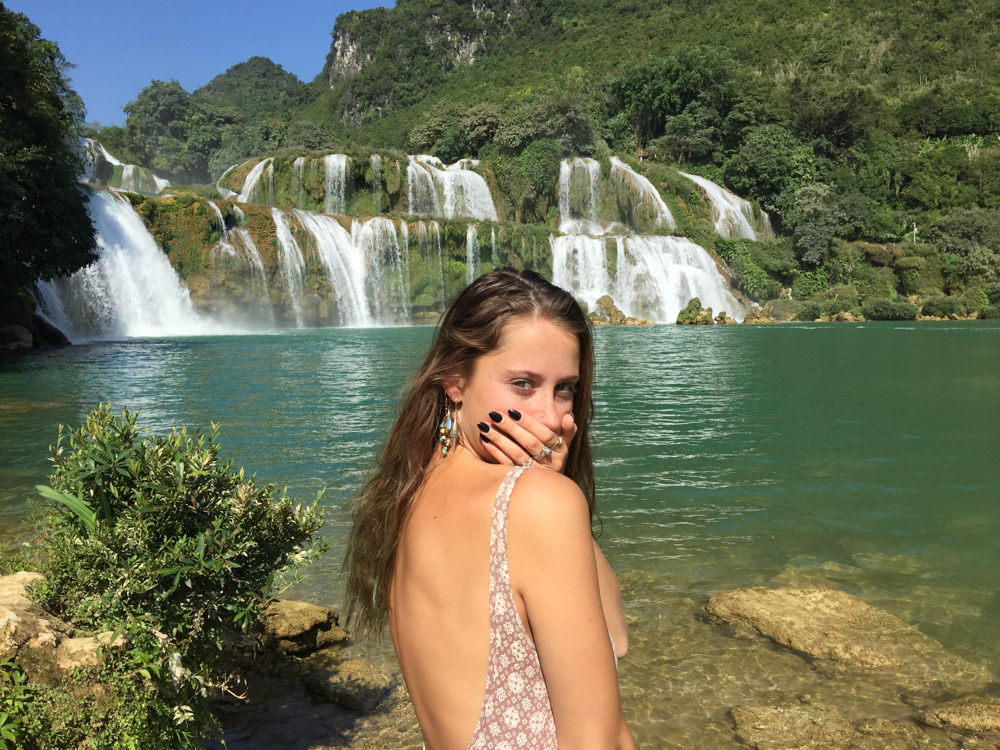 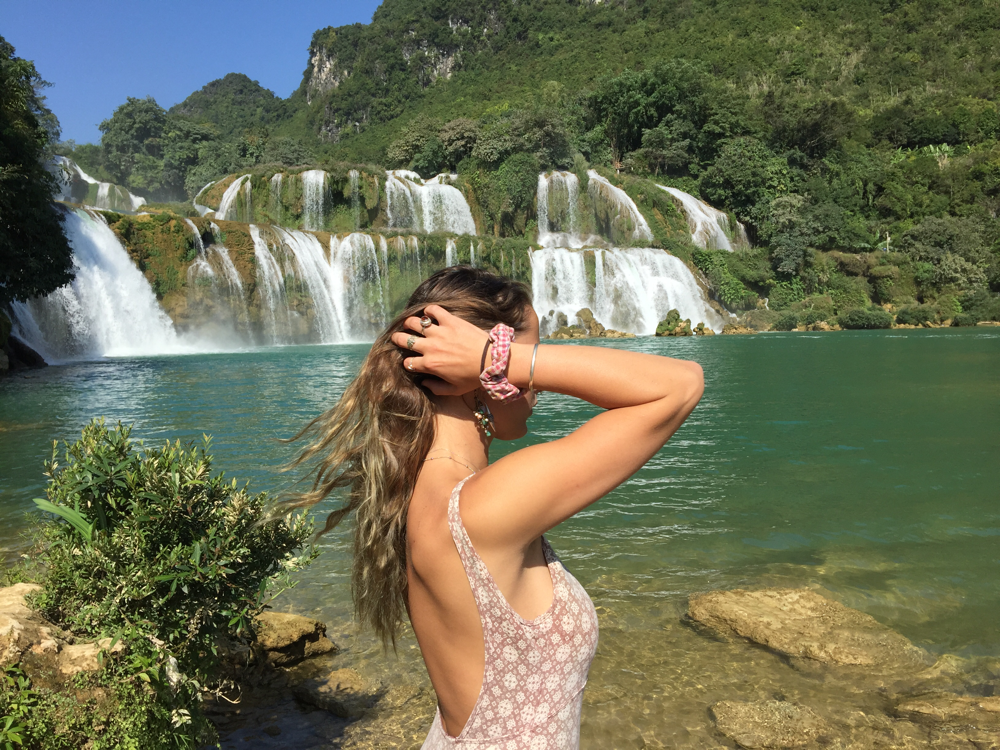 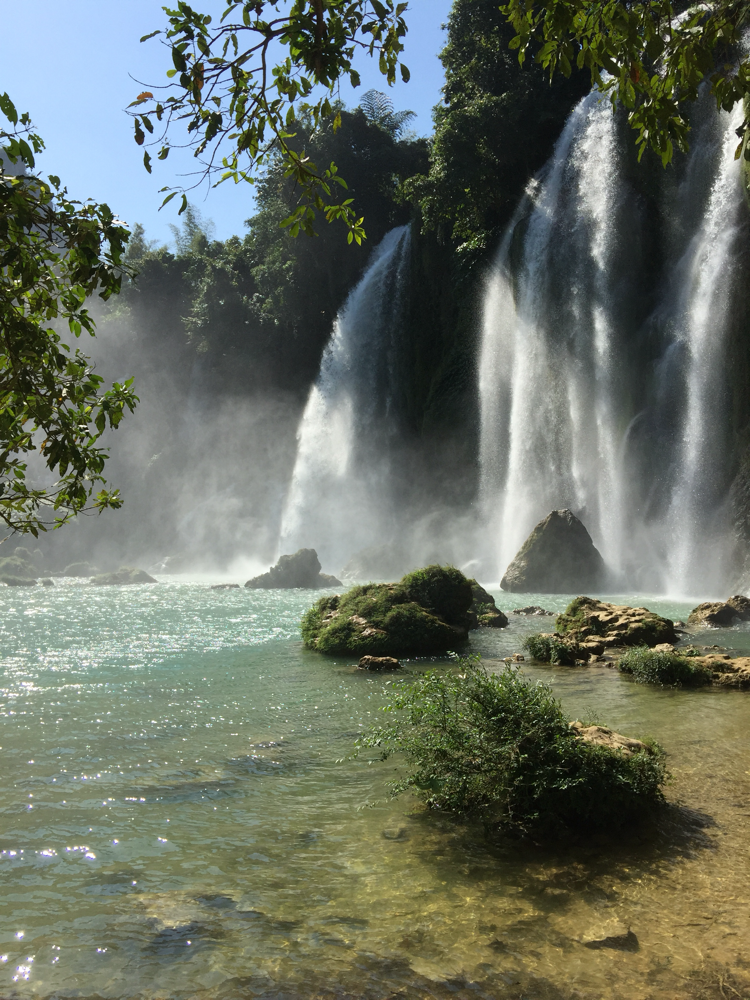 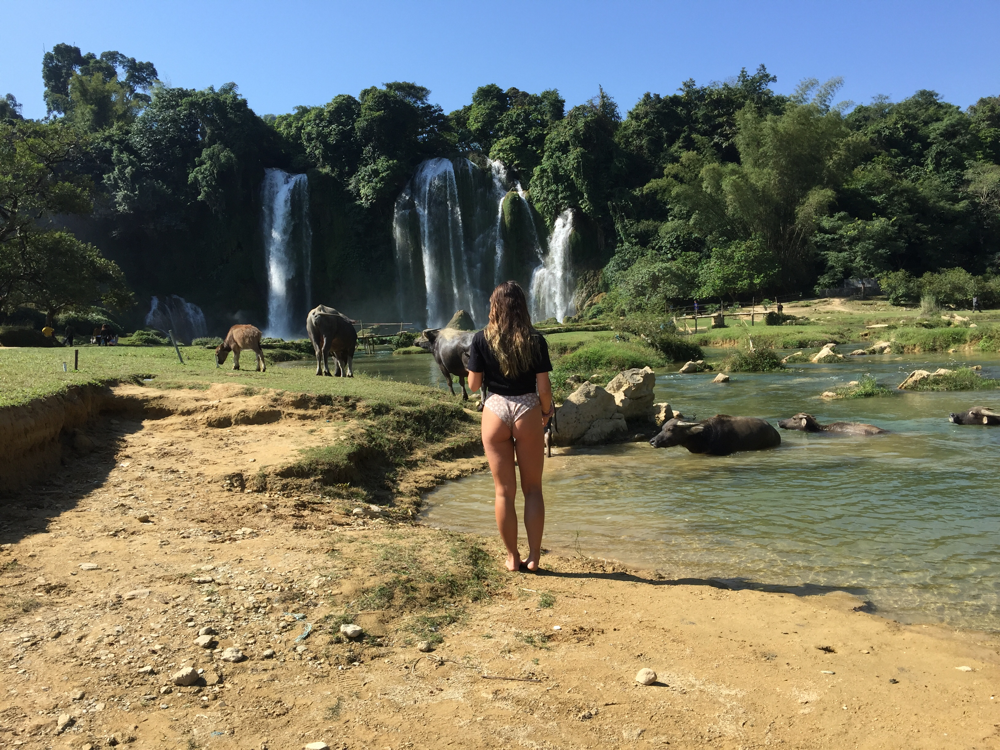 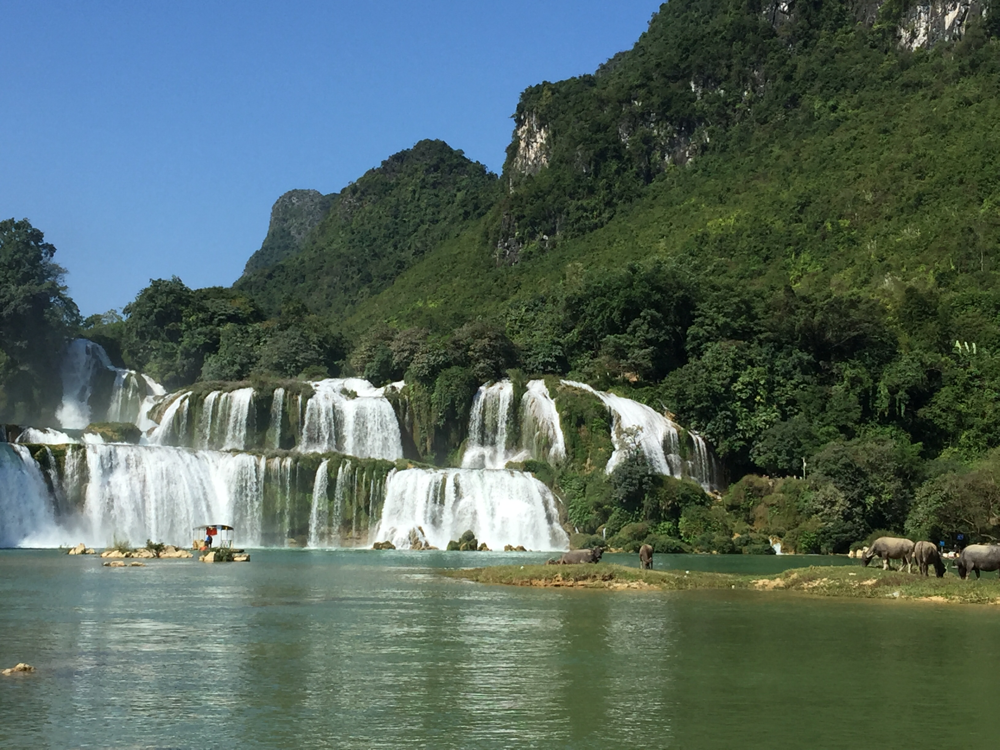 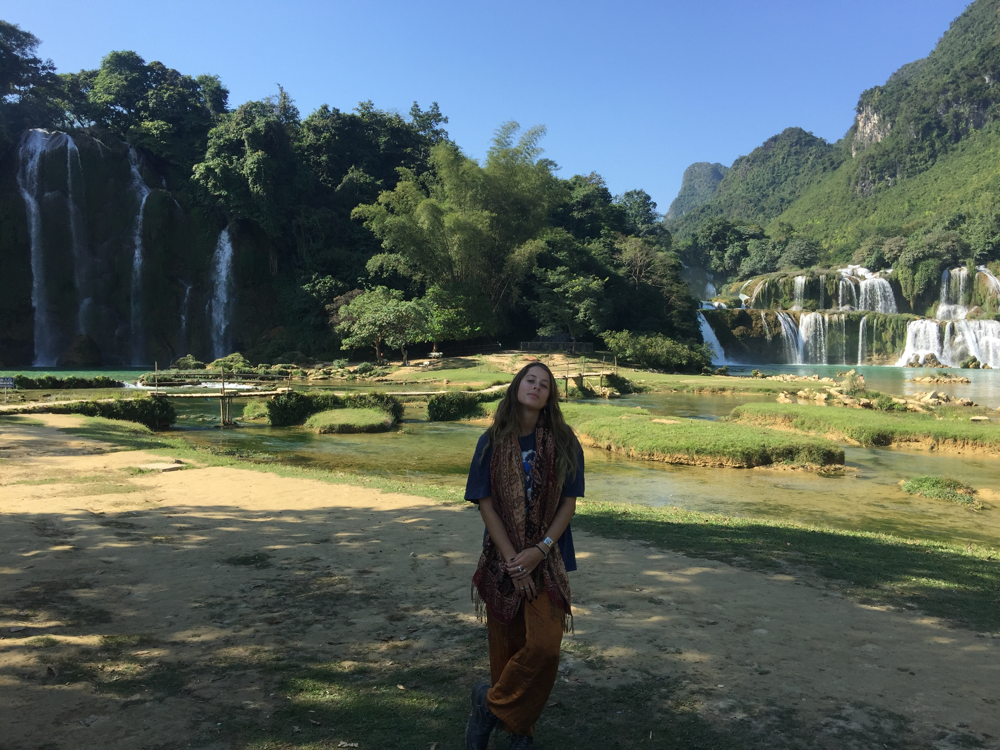