An early visitor, John Steinbeck wrote in 1953: ‘Positano bites deep. It is a dream place that isn’t quite real when you are there and becomes beckoningly real after you have gone.’

Whenever anyone asks me where my favorite place in Europe is Positano is ALWAYS my answer. The 50km stretch of coastline that makes up the Amalfi Coast between the towns of Sorrento and Salerno is simply breathtaking and Positano is by far the most memorizing of the towns. It appears just as beautiful as it does in the photos and it’s charm; elegance and lively atmosphere will have you feeling completely at ease from the minute you set foot there.

Positano also makes a great base for seeing the rest of the Amalfi Coast whilst also having its own set of incredible beaches and cobbles stone streets to explore.

We had 4 surreal nights here at the beginning of September (I wish we had 10). The weather was amazing and it wasn't too busy as the peak tourist season was over.

The nearest airport is Naples, where we flew into from Santorini. As it is a main airport you are likely to find lots of cheap deals flying in and out... I think our flight cost us $120 direct from Santorini with Volentia Airlines. We arrived mid-afternoon and caught a public bus from outside the airport to Sorrento that cost us 8 euros each. From the Sorrento bus station, public buses to Positano run half hourly (most days) and cost 2 euro pp. While we were waiting for this bus we left our luggage at the station and did some supermarket shopping, preempting that there wasn't going to be many supplies in Positano itself (we were right). Sorrento is a relatively big town so if you have time, grab all the essentials before you head to into Amalfi.

It will make your life a whole lot easier if you know where exactly you need to get off the bus once you arrive in Positano. The bus route runs above the town and only stops 3 times before moving onto the next Amalfi village and walking from one stop to the other with luggage is an incredibly tedious and draining experience. The buses are chaotic, as they are full of people and you'll be lucky to find anyone who speaks English and knows where they are going.

We spent over 2 hours walking with our bags from one stop to another trying to find our  accommodation, something we could have avoided if we had just looked it up on the map whilst we had WiFi. (something we always seemed to forget to do)

The bus trip along this coastline is said to be one of the most beautiful in the world so make sure you're sitting on the right side of the bus!

Once in Positano getting around is relatively easy (as long as you like LOTS of stairs). We had read many complaints about the number of stairs in Positano and had laughed at what we thought were lazy, old people's negativity. Now having been there myself I can confirm THE STAIRS WILL BREAK YOU. Our accommodation was up on the hill meaning a 15 minute walk down to the beach and a 40 minute climb up.

The streets are tiny and cobbled stoned and although a mini bus route does run through the town, walking is far easier, cost effective and interesting, seeing as every corner in Positano is beautiful and worth exploring.

Connecting Positano to the other Amalfi towns is the 'international bus' line which runs along the cliff road above the village. The buses run every half hour in both directions and cost 1.20 euro per trip. We used this bus to get to Amalfi and Furore and found navigating our way there easy. 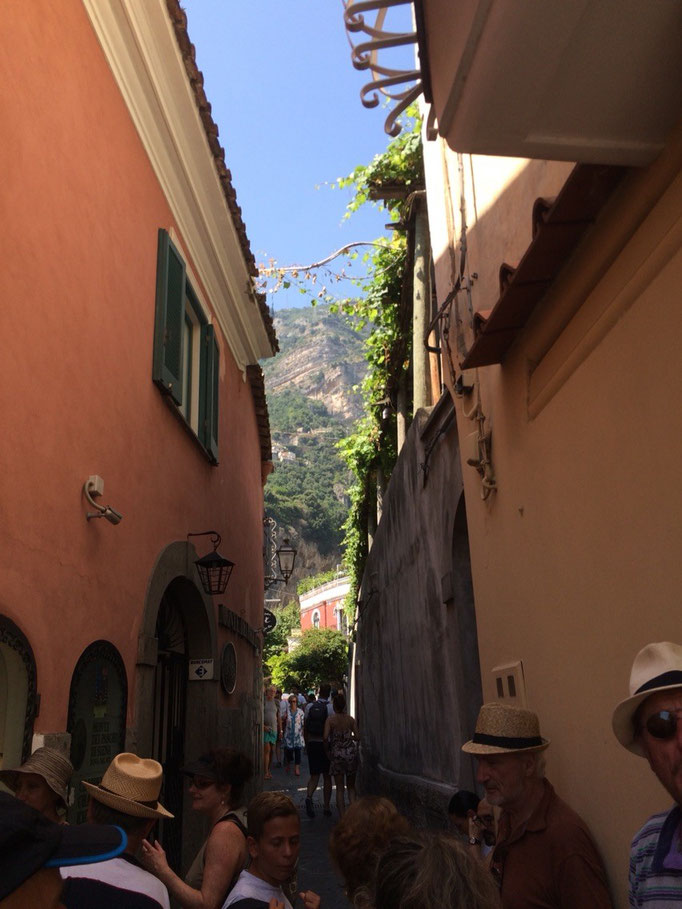 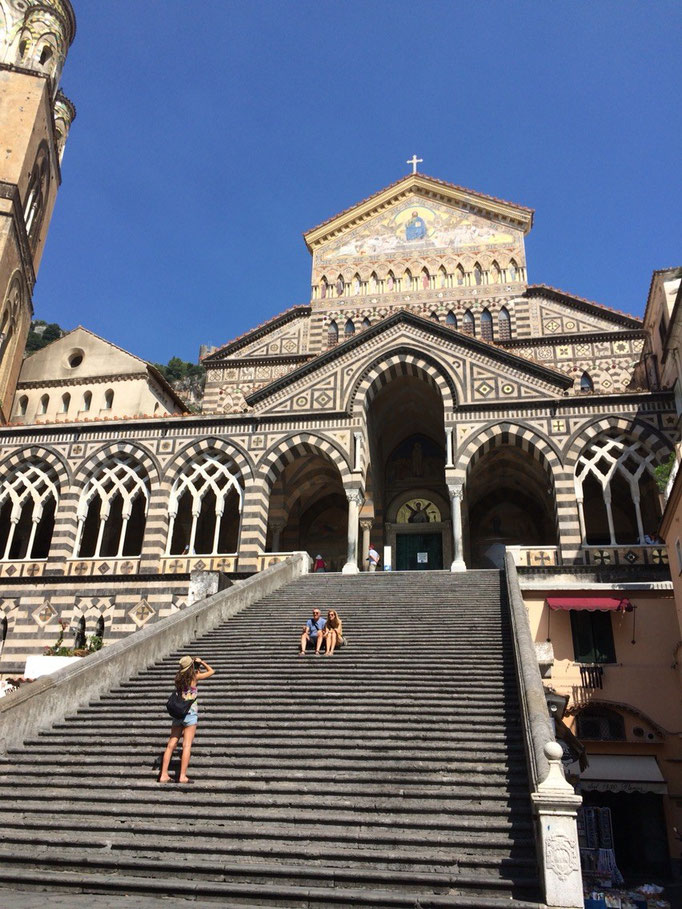 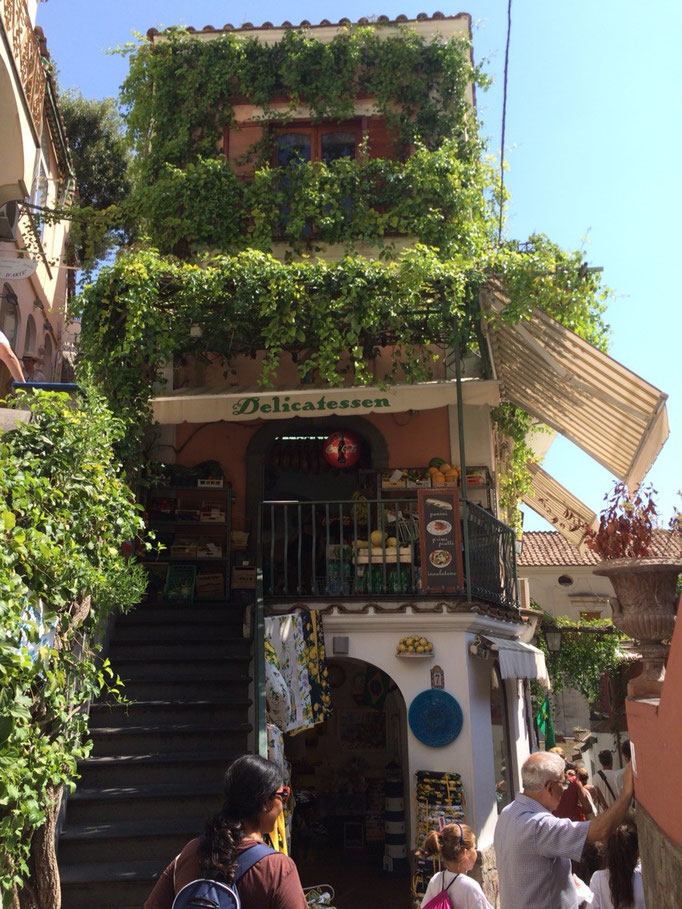 We stayed for 4 magical nights in the most astounding Airbnb in existence (not exaggerating I swear!!) It overlooked the ocean, the mountains and the colourful buildings that clung to them. We had a kitchen and a massive balcony which meant our dining experiences were both cheap and 5 star. We had candle lit dinners overlooking Positano's coastline for 3 euro each (:

The accommodation cost us around $90 a night ($45 each) which was far more than our usual budget but I would easily have payed twice this. I booked it over 6 months in advance as Positano properties are high in demand and this particular Airbnb was completely booked out already surrounding the 4 nights I selected. Because of this we had to plan our trip around the 4 nights we had booked here but it was 100% worth it. If you can't find any accommodation in Positano staying in Sorrento is also a great option. The public bus runs every half hour and only cost 2 euro per person meaning you can still spend your days lounging on Positano's beaches without spending hundreds of dollars a night to be there. Sorrento is an incredibly beautiful city in itself, somewhere I wish i'd had more time to explore.

The link to where we stayed is HERE

Food in Positano is expensive...there is no conventional supermarket (only a small delicatessen) which only has the essentials (at twice the price). If you can, do all your supermarket shopping in Sorrento before you arrive.

We didn't eat at any of the restaurants as they were all incredibly expensive, catering to the rich and famous who tend to holiday here. We had our own kitchen which was essential for our survival and I believe our dining table had a better view than any of the expensive restaurants anyway!!

We got gelato a few times, but be prepared to pay 3-4 euro for a scoop... (we shared 1 cup)  Amalfi is lemon growing country so be sure to try some lemon sorbet (its the best) or the lemon slushies which are sold on almost every corner. 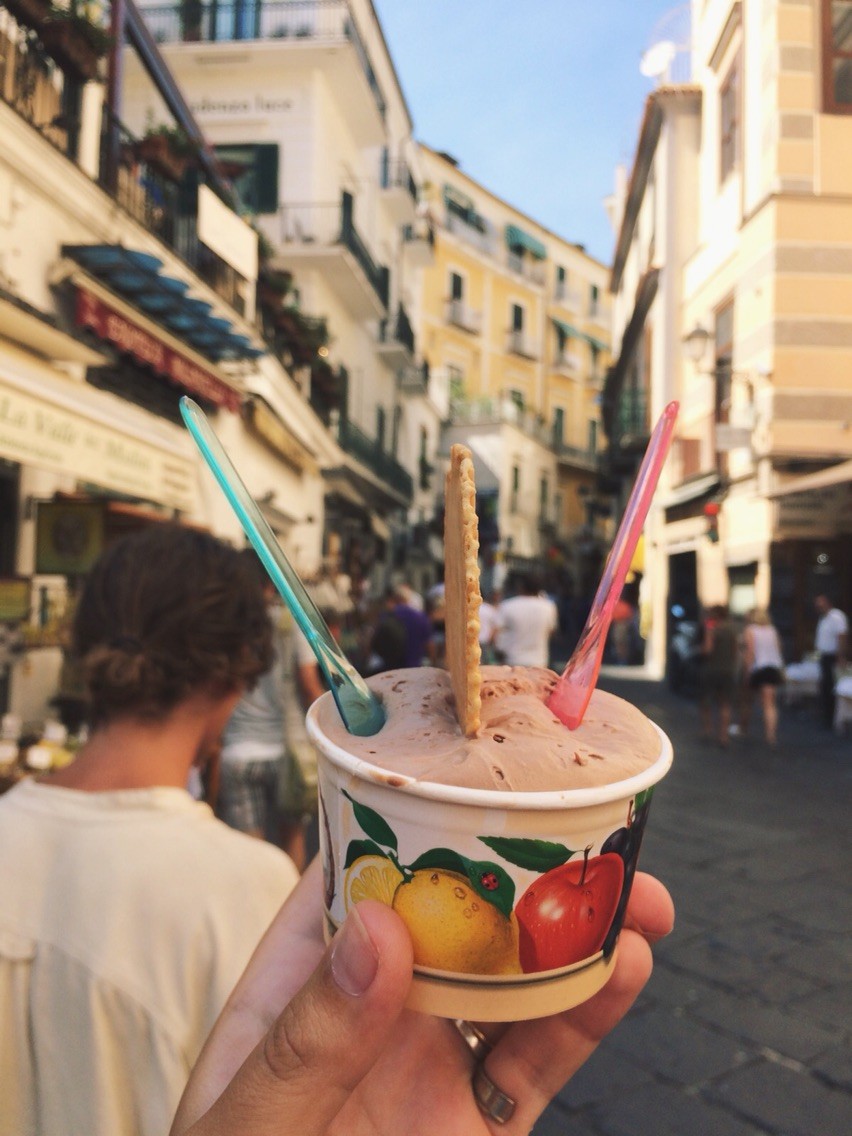 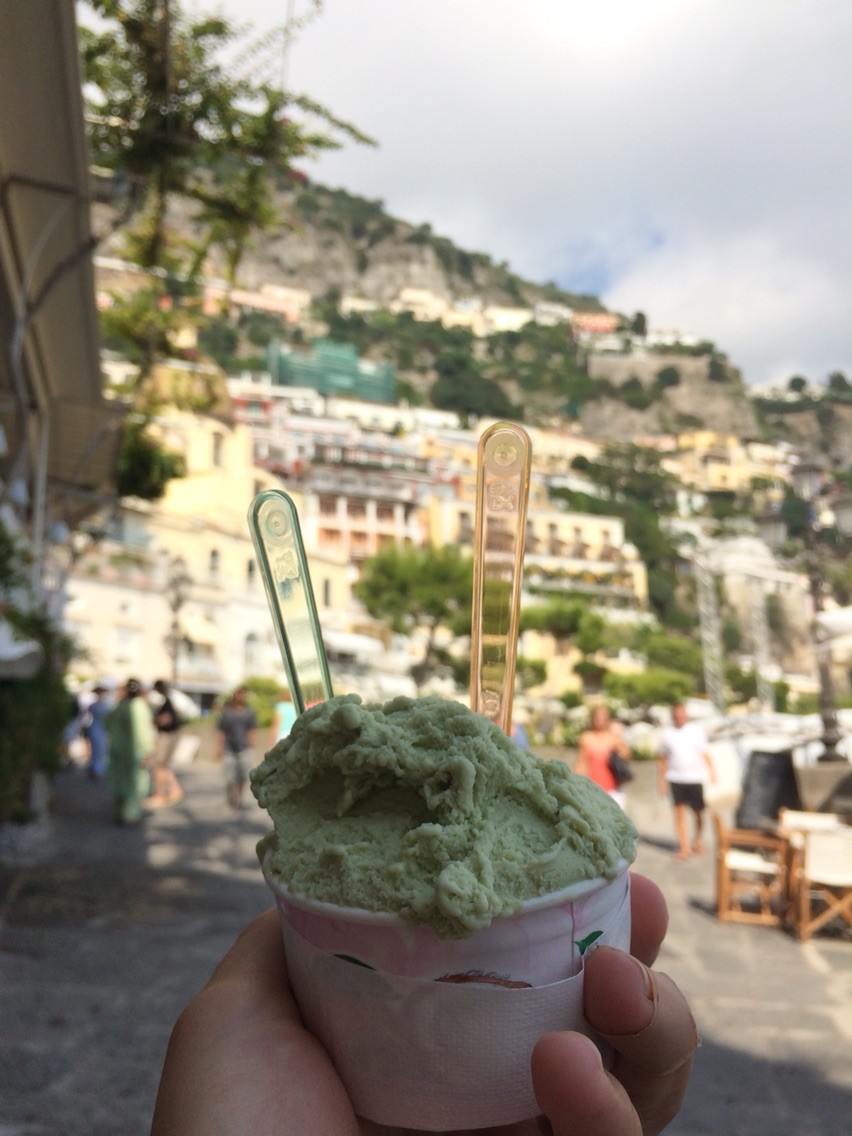 What to do in the Amalfi Coast

Ebbs and I spent most of our time exploring the cobblestone streets and sneaking in to ridiculously luxurious hotels. We also caught the bus to Amalfi town and did the hike up through the mountains one afternoon. On our last morning we got the bus to Furore beach which was also spectacular (i'm writing a separate post on these two places because I have way too many photos)

Spend hours lying in the sun and swimming at the most attractive beach you'll ever visit. The shore is crowded with colourful deck chairs that cost 10 euros pp.to hire for the day. As you can probably guess Ebbs and I did not pay to lie on a chair and instead lay on our towels in the 'free beach' section which was perfectly fine. There are other beaches spotted along Positano's coast line away from the center so make sure you follow the paths to find them as they are just as pretty.

If you have time, go on the ferry to one of the secret beaches in the next bay. Tickets are only a few euros and the coast is amazing from a distance.

You can hire a boat from many of the companies along the shore with or without a skipper. If you want to do a day-trip to the island of Capri, opt for the smaller boat companies – these are less touristy and will take you on a much more memorable tour (they’ll stop wherever you want and they know all the best spots to take you such as secluded beaches, hidden caves and grottos). This isn't a cheap activity and isn't something Ebbs and I could afford.

Positano is filled with gorgeous (overpriced) boutiques and market stalls. Most of the things for sale are aimed at rich, middle aged women however the Antica Satorina store that was spotted all around Positano had some of the most beautiful lace, linen dresses I had ever seen. Each shop was a labyrinth of white lace and flowers and surprisingly and unlike anywhere else in Positano the prices were incredibly reasonable (each of the dresses  I bought cost 18 euros!) Ebbs had to physically drag me away every time we walked past.

Day trips to Pompeii and Capri are also meant to be fantastic and are easily accessible by boat and bus. 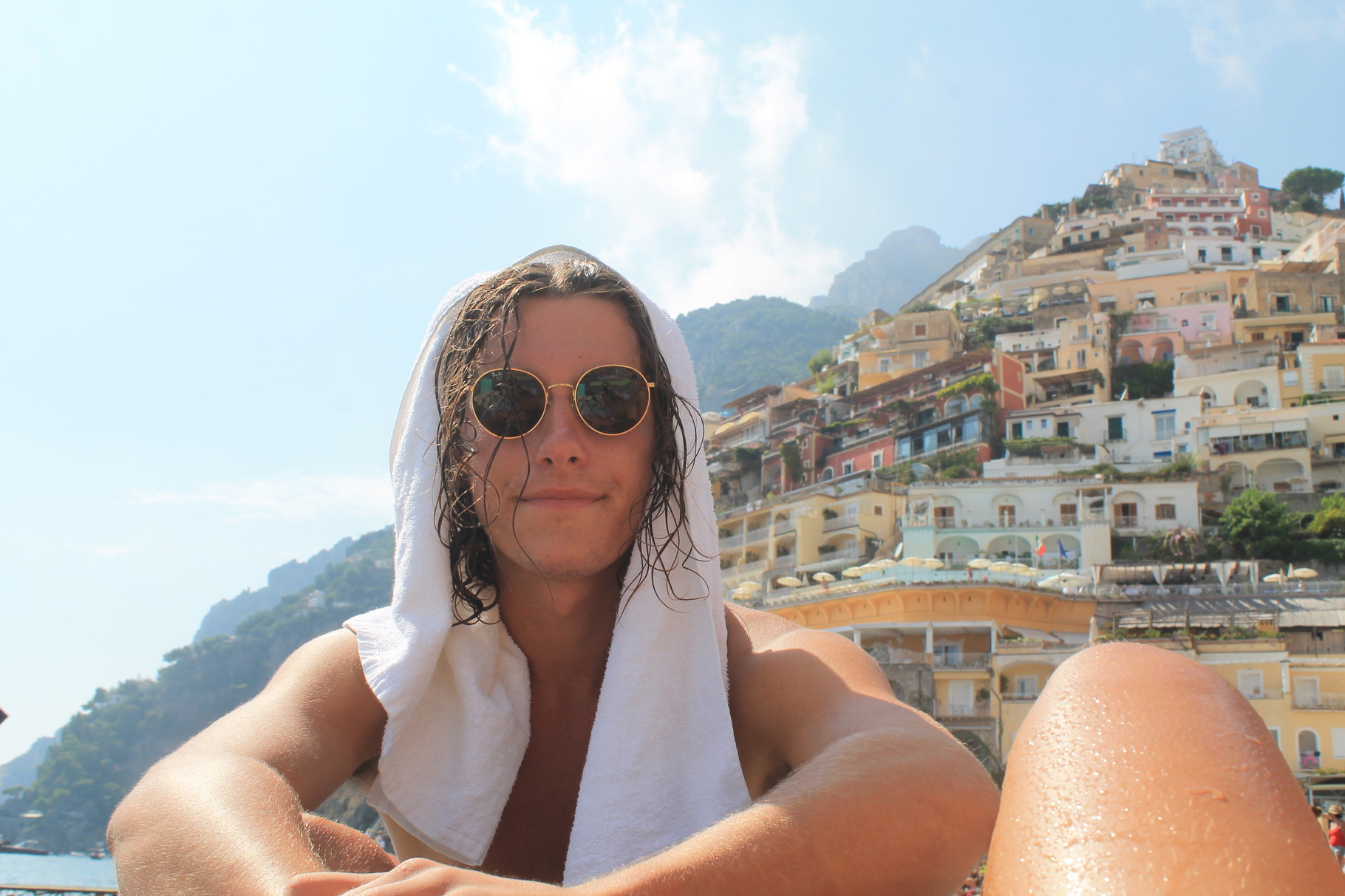 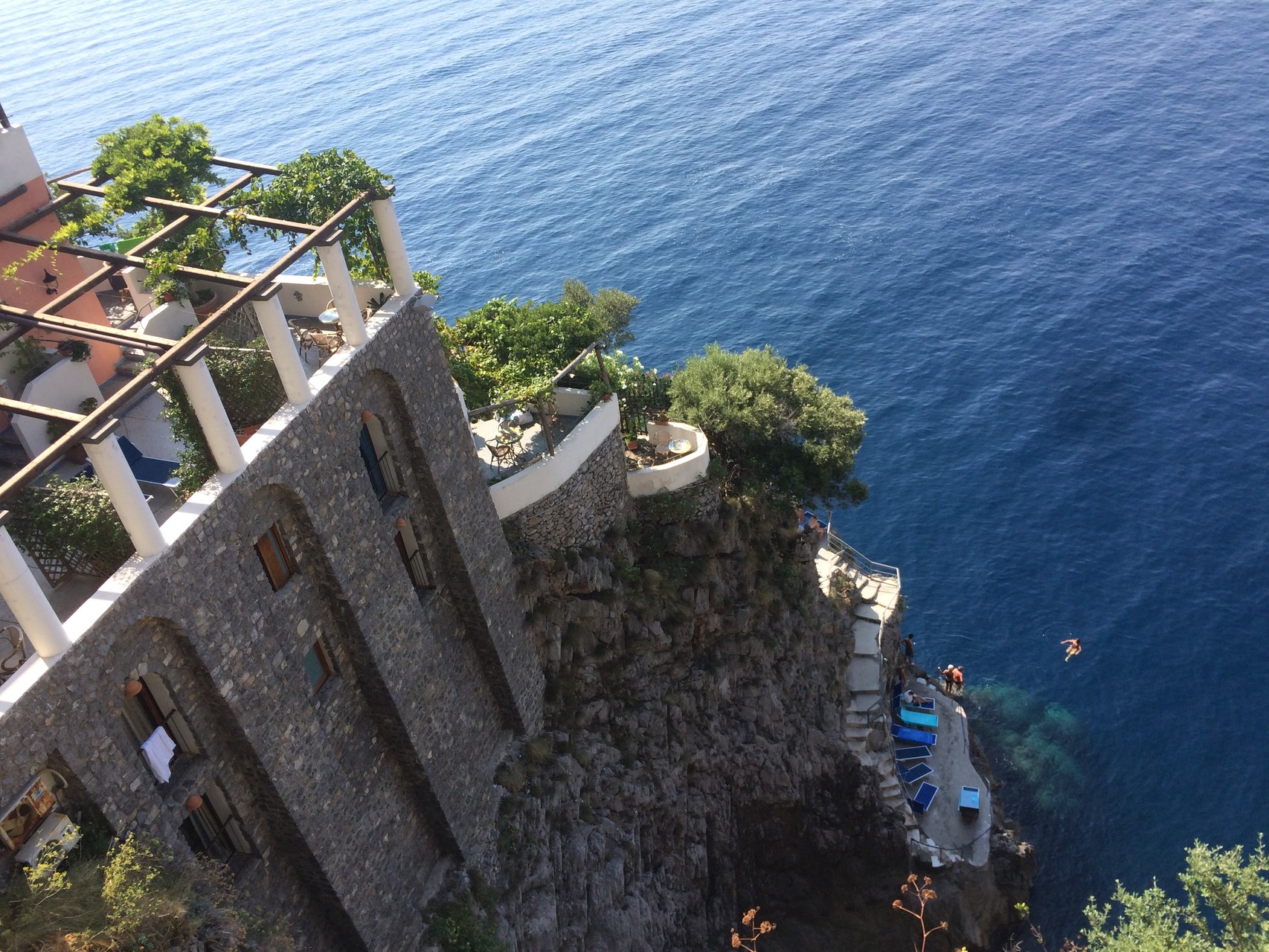 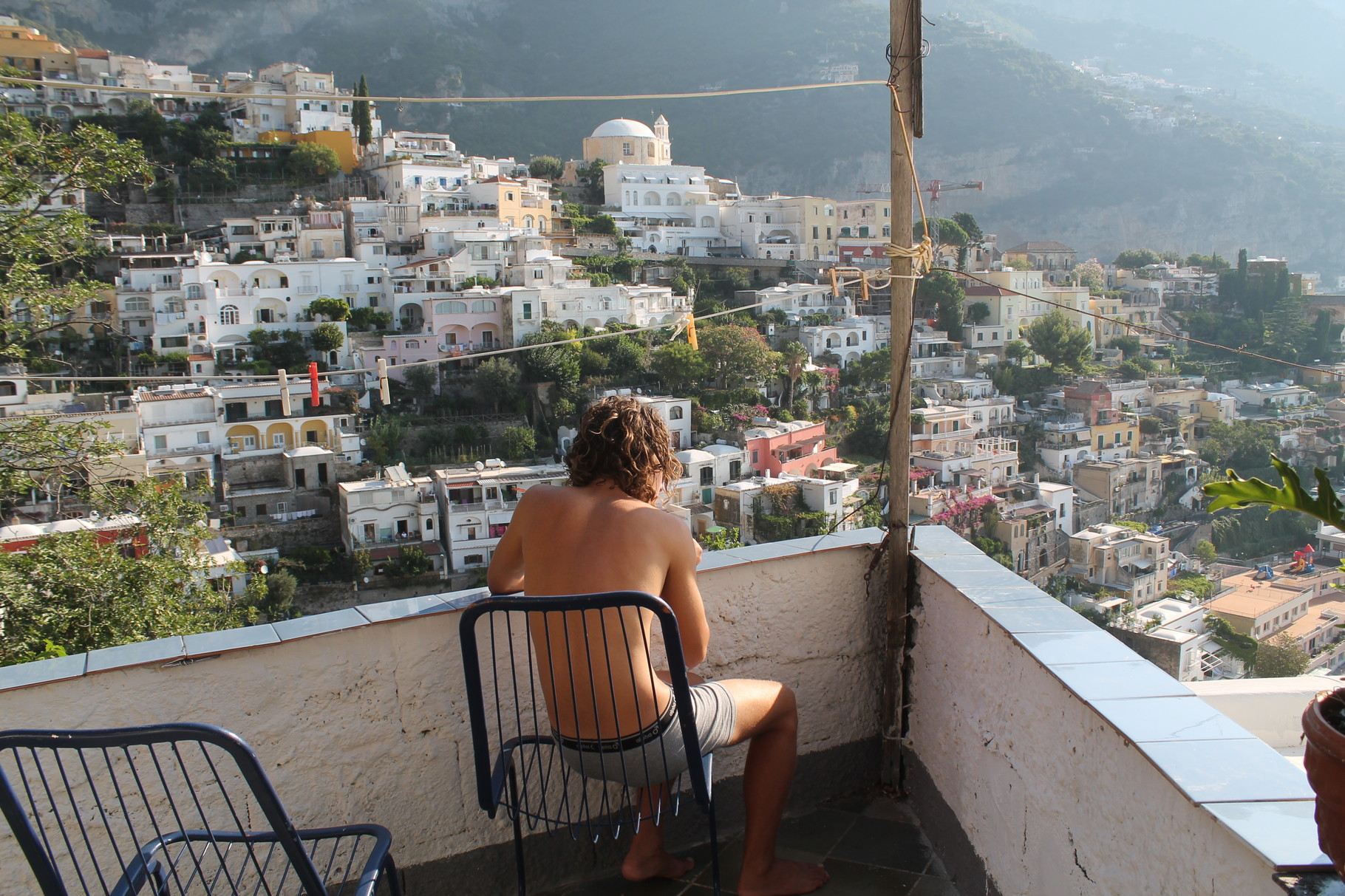 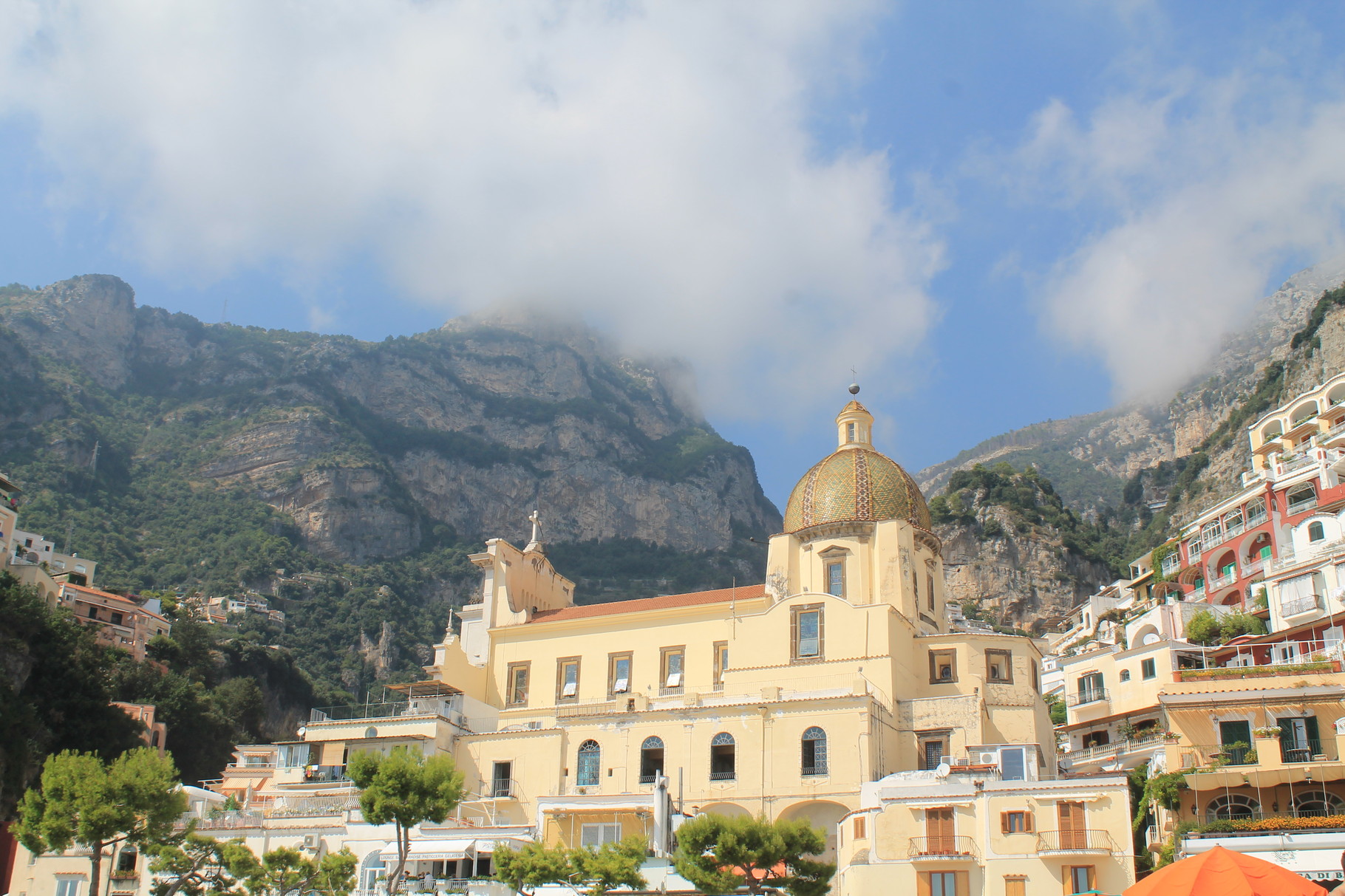 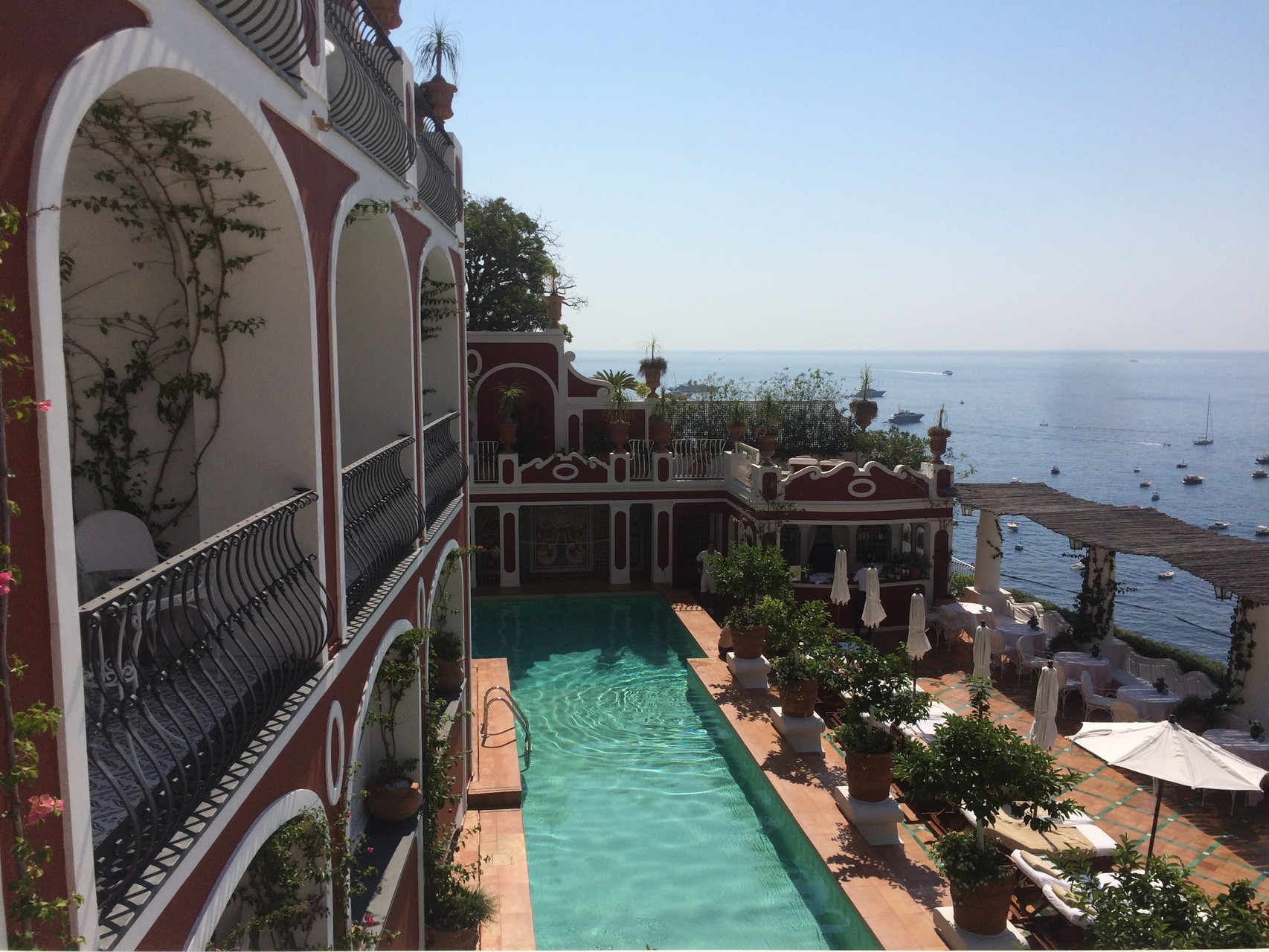 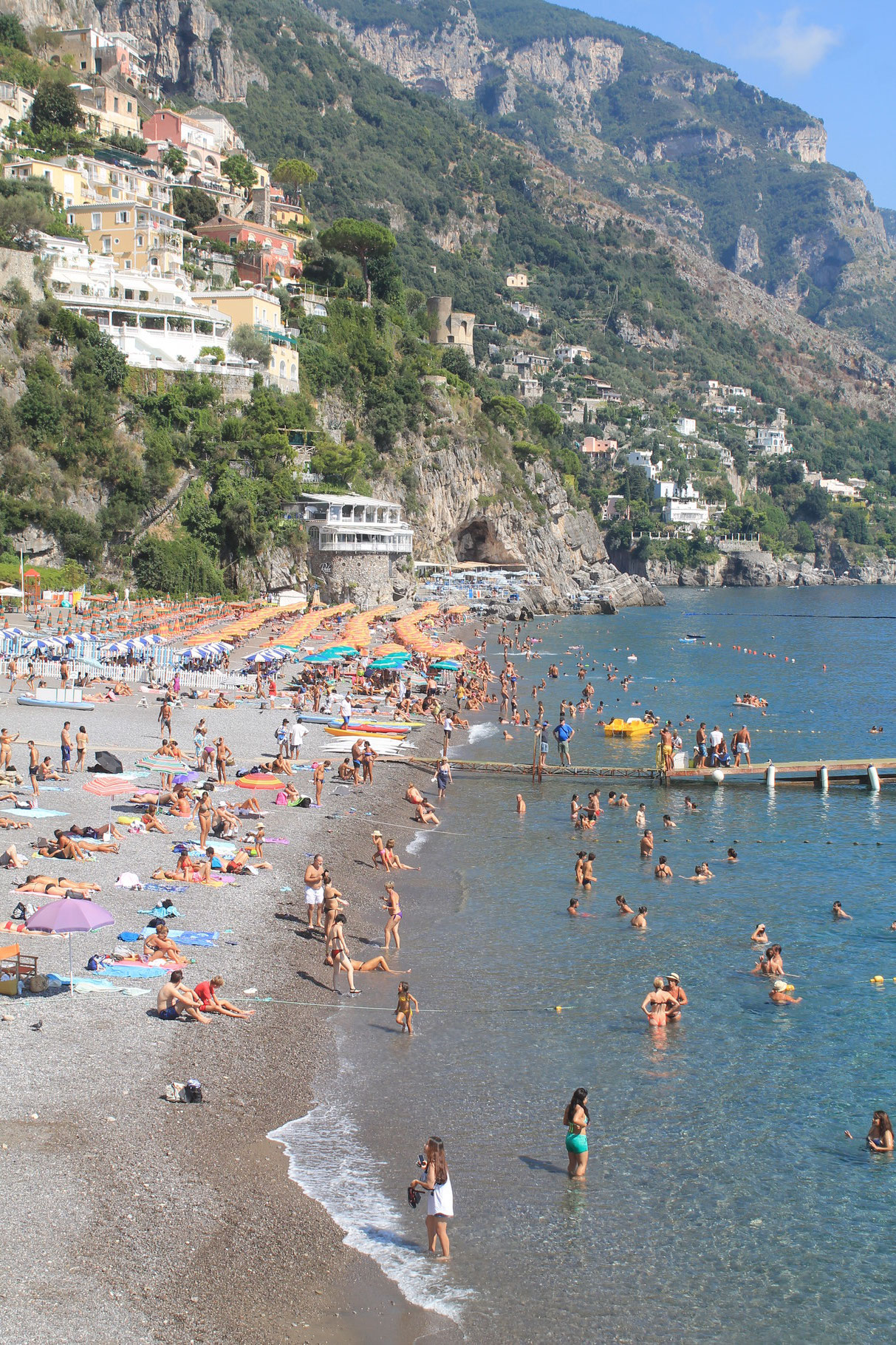 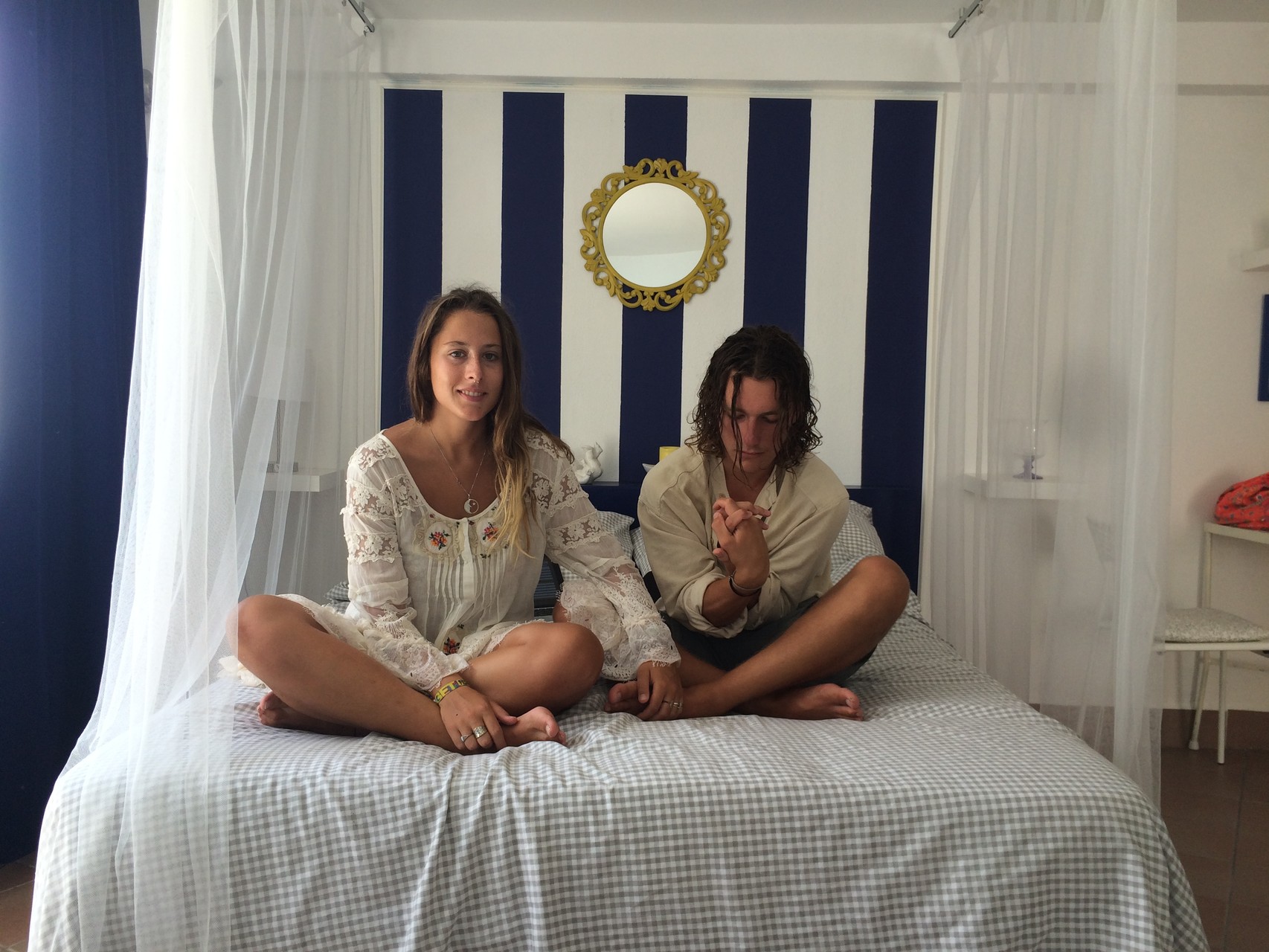 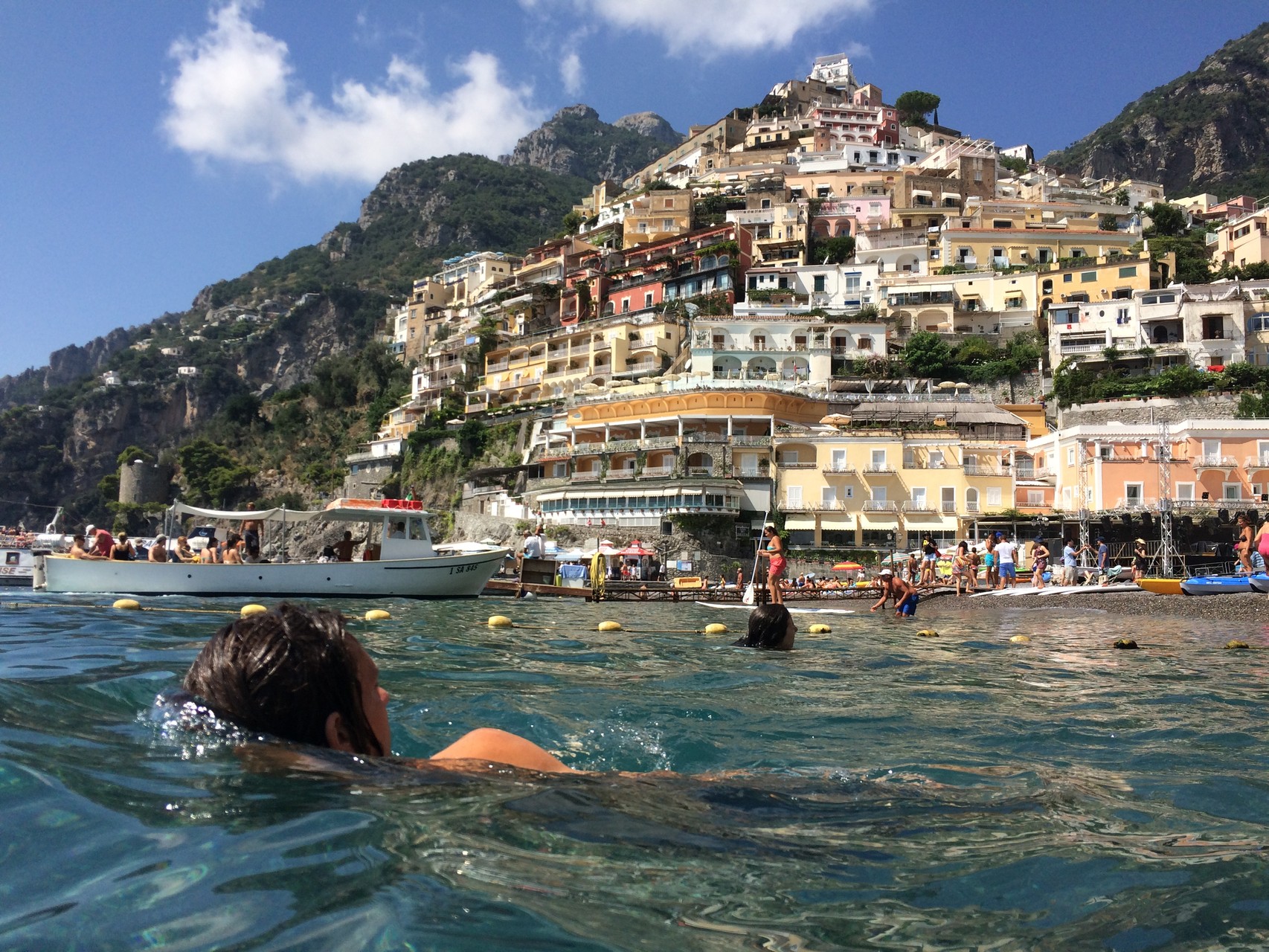 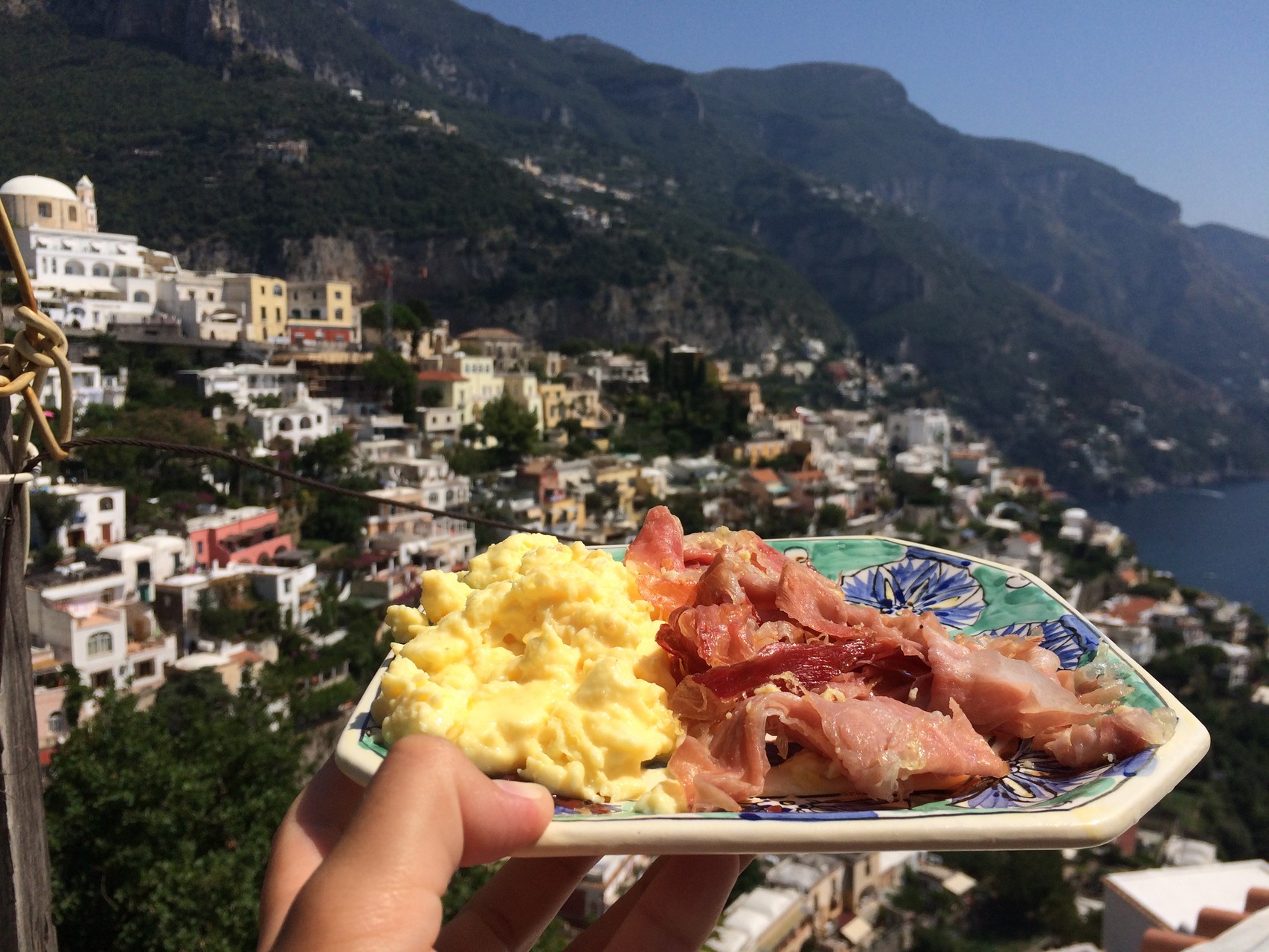 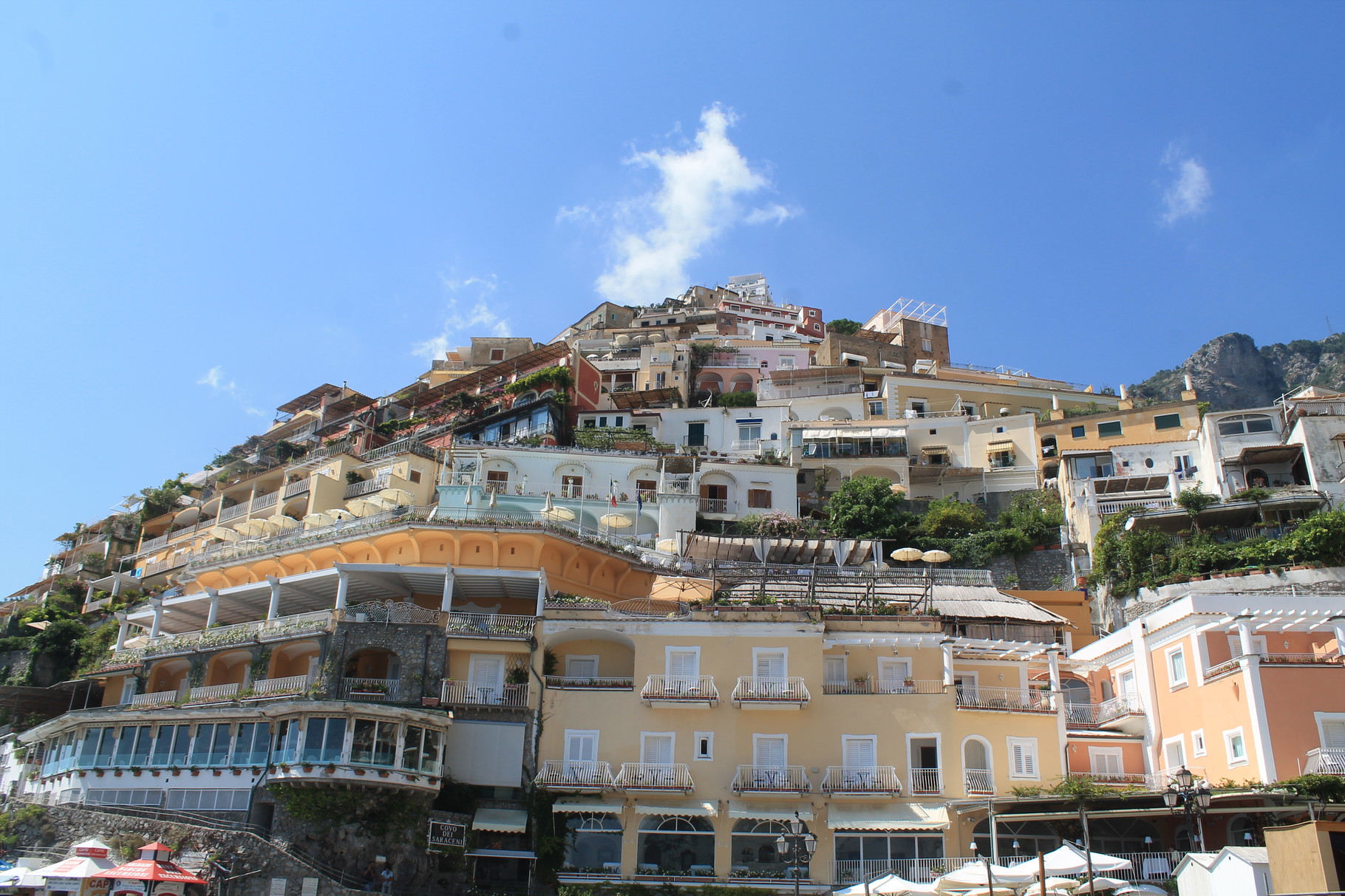 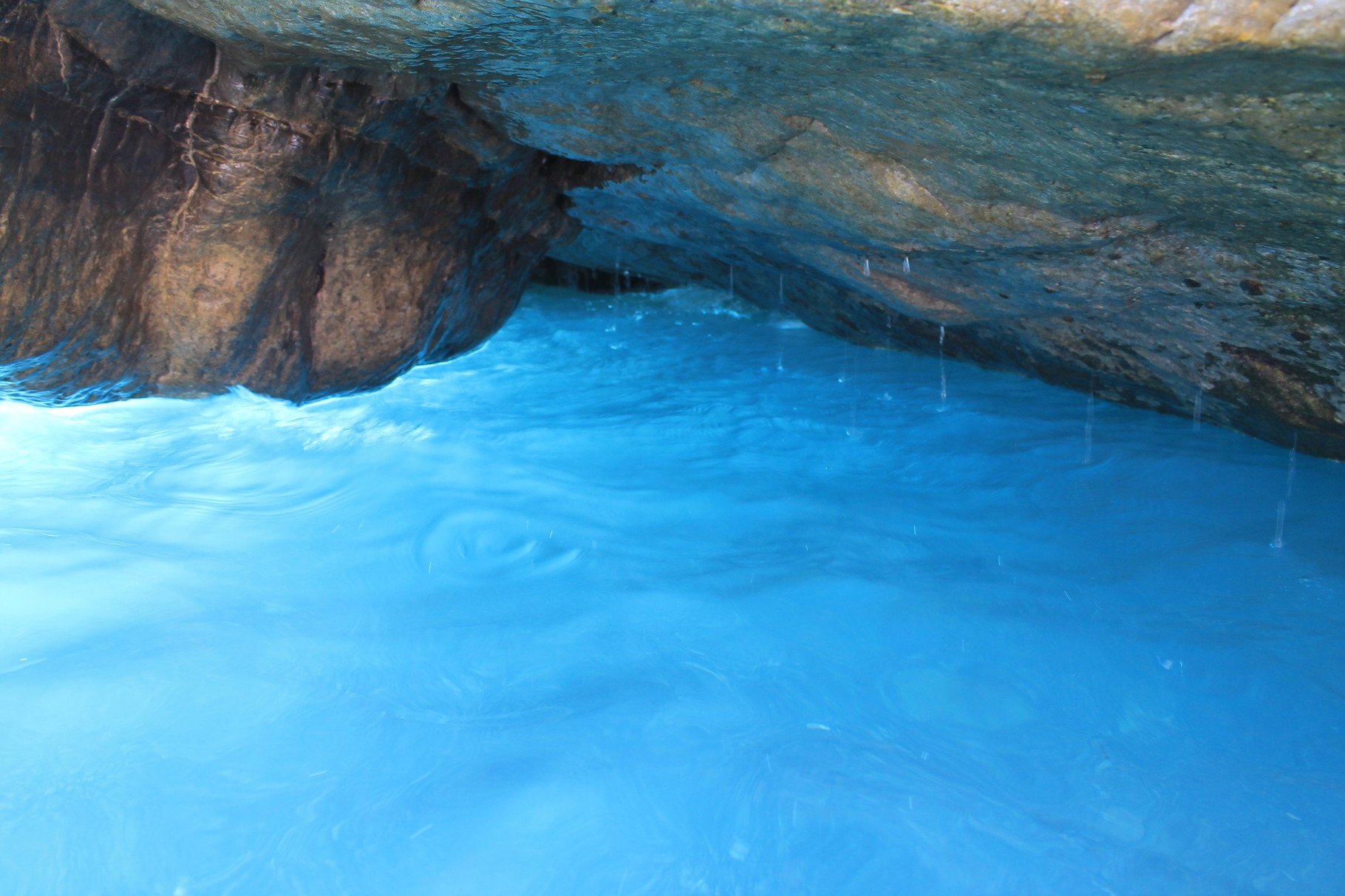 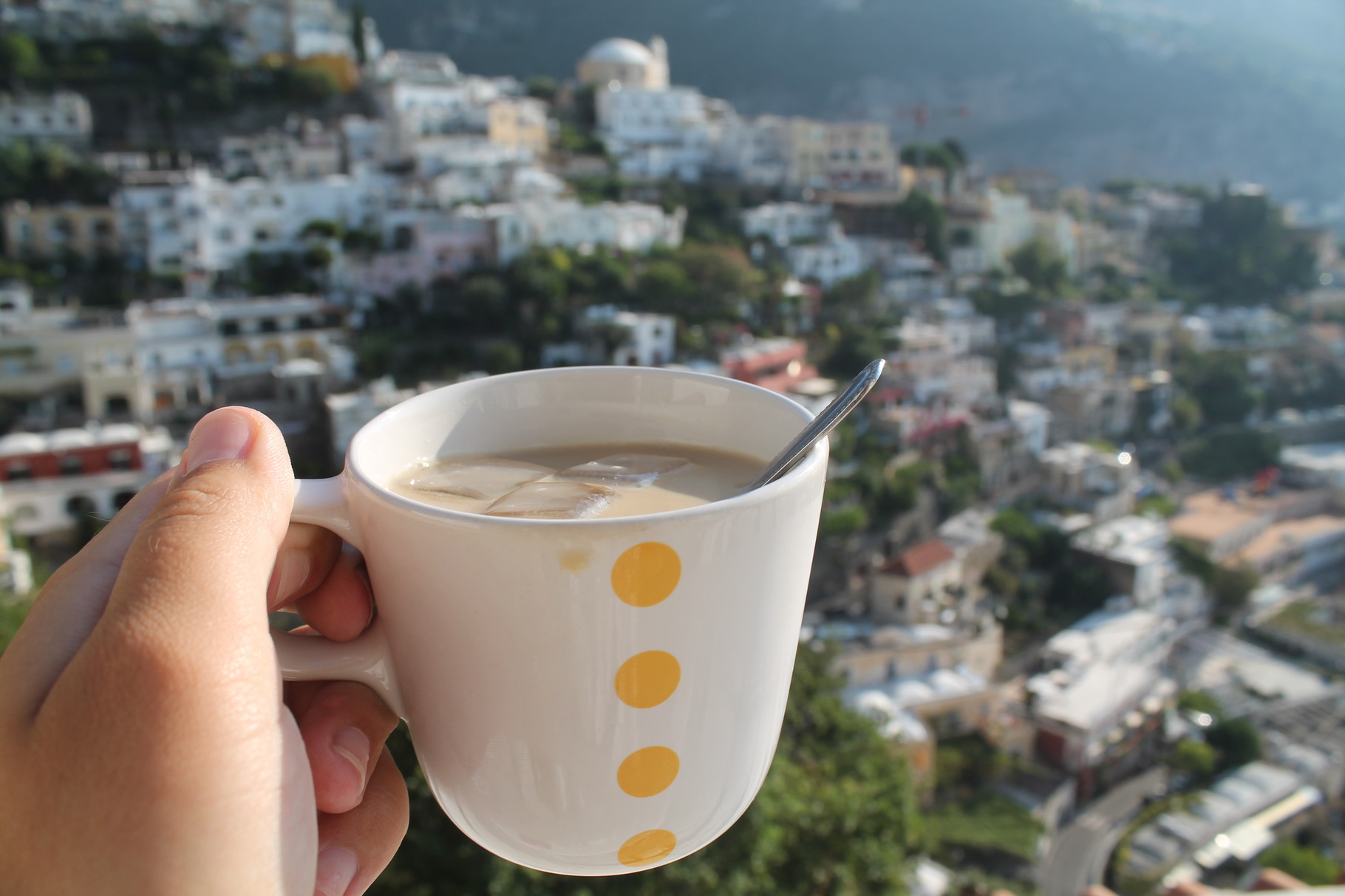 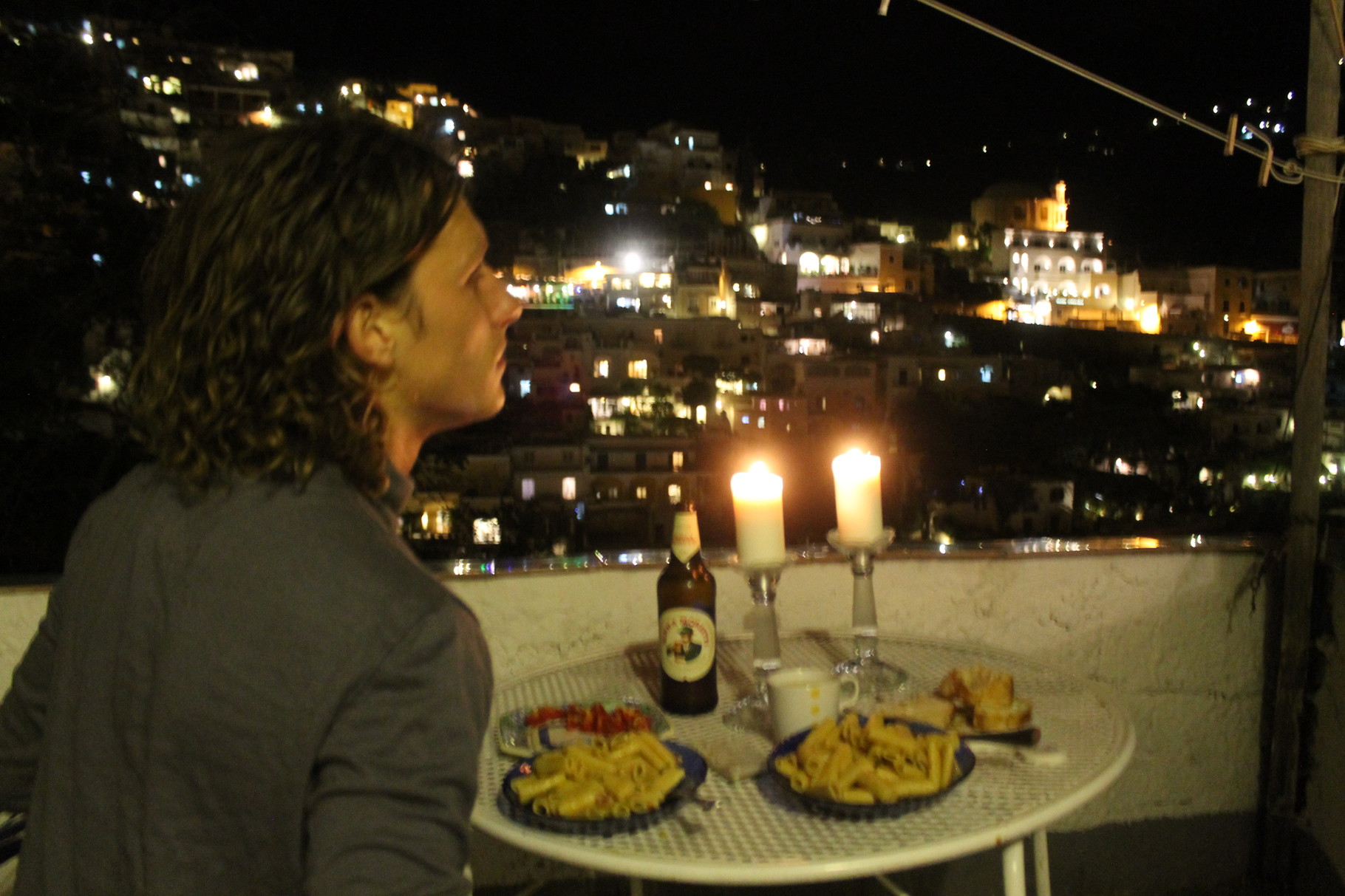 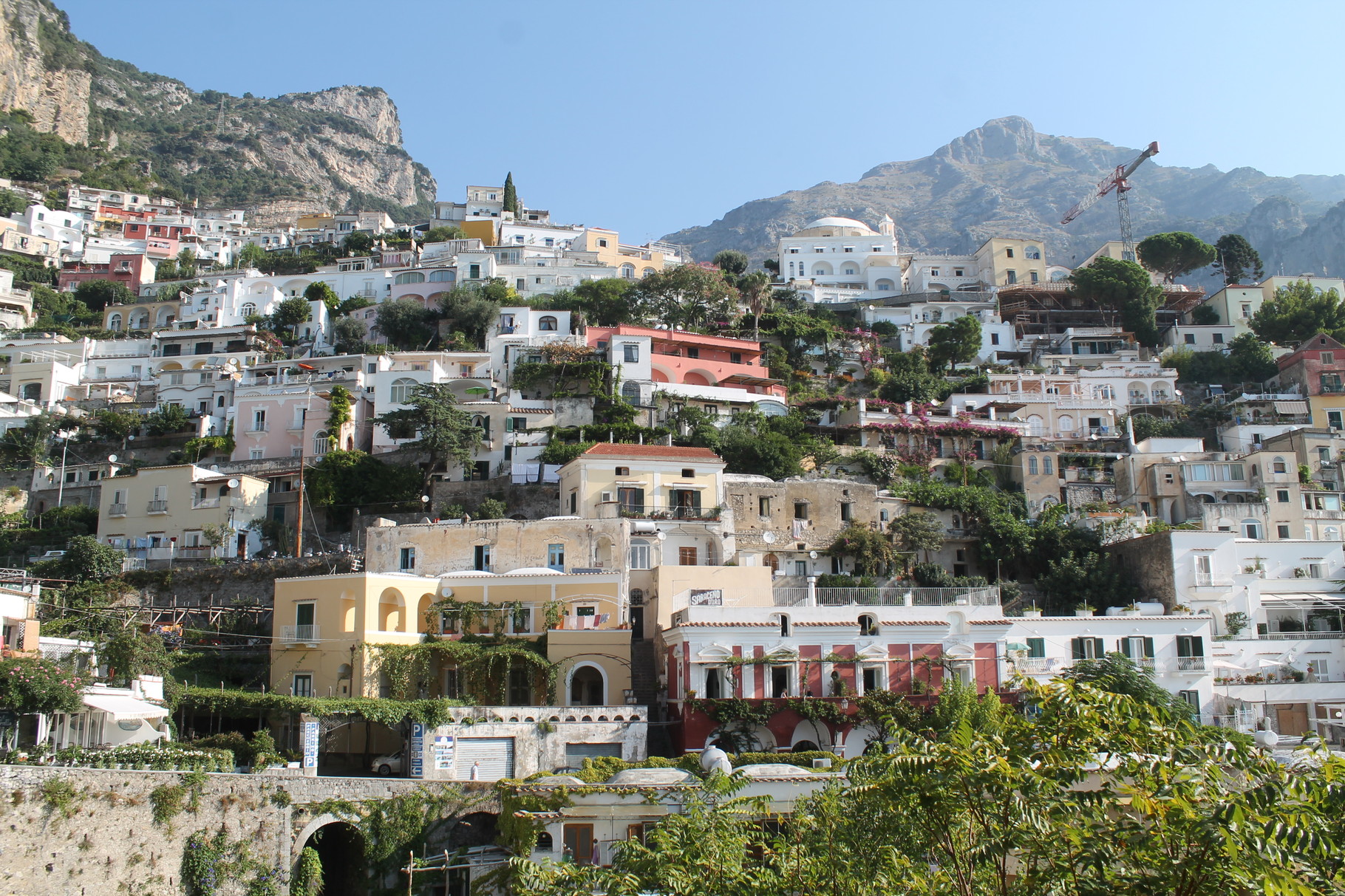 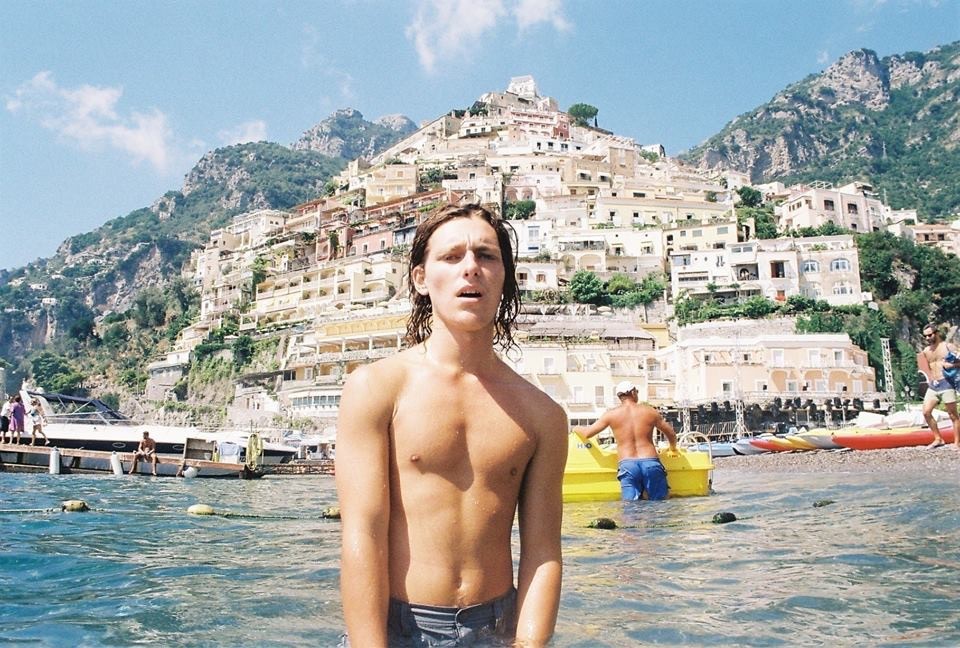 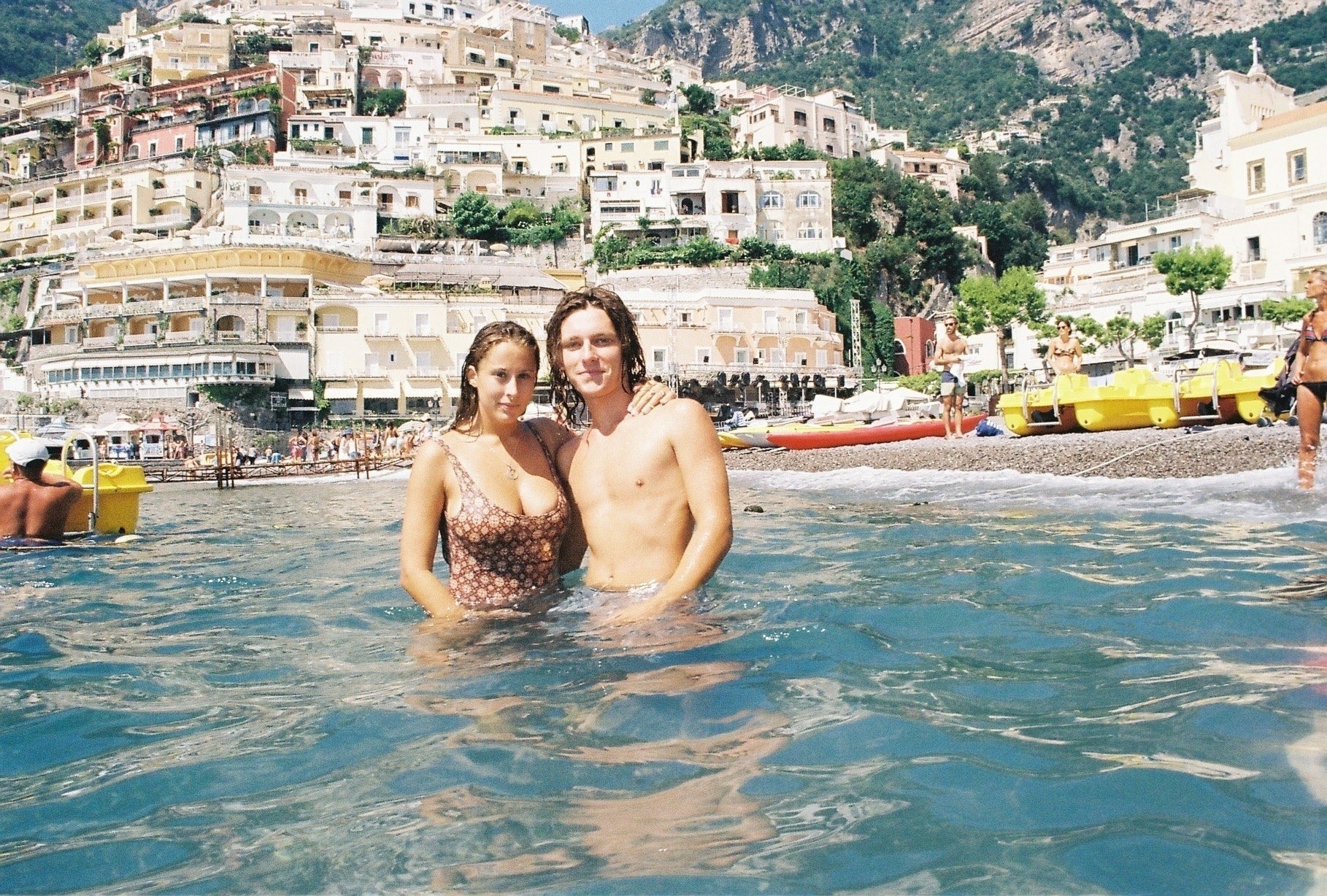 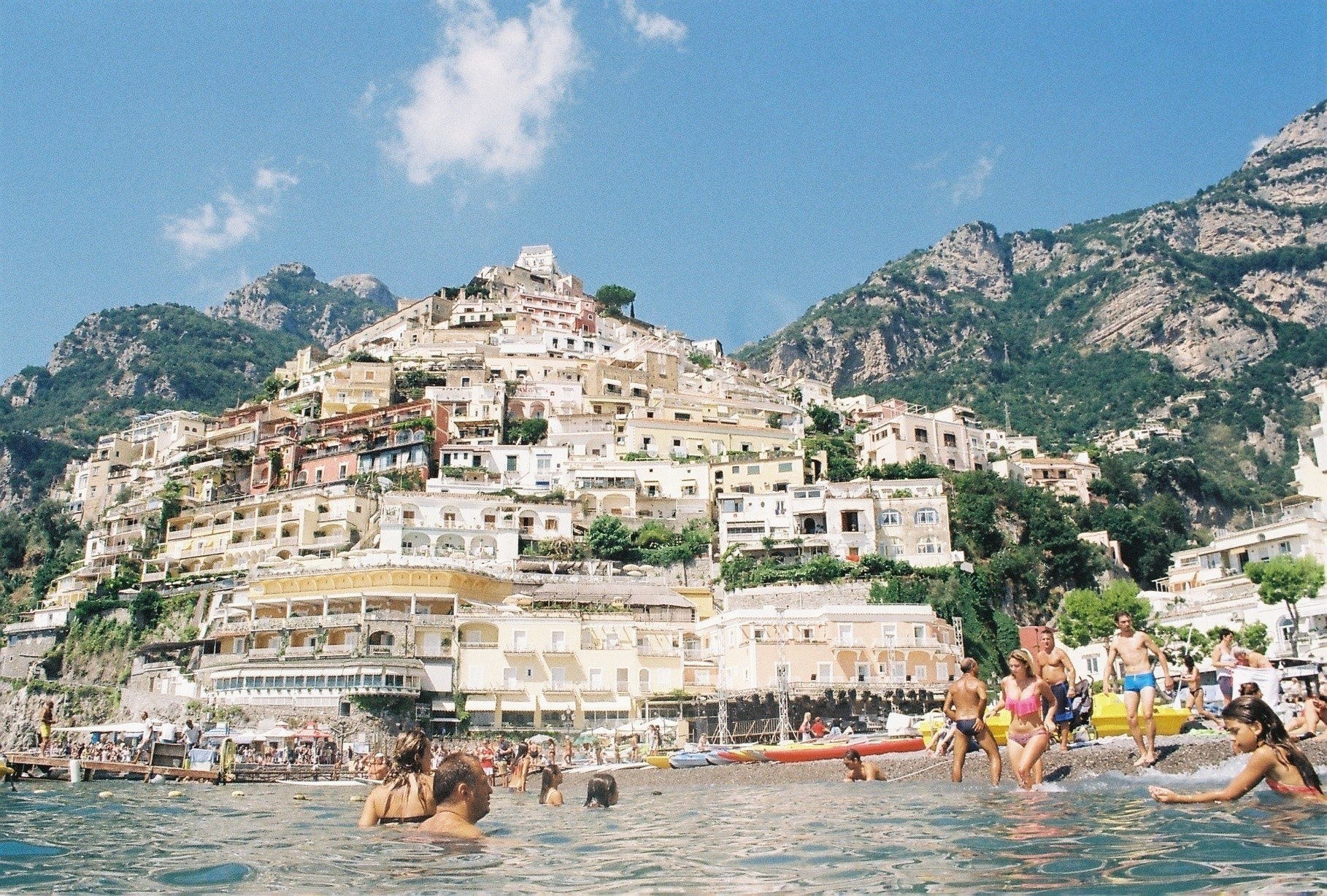 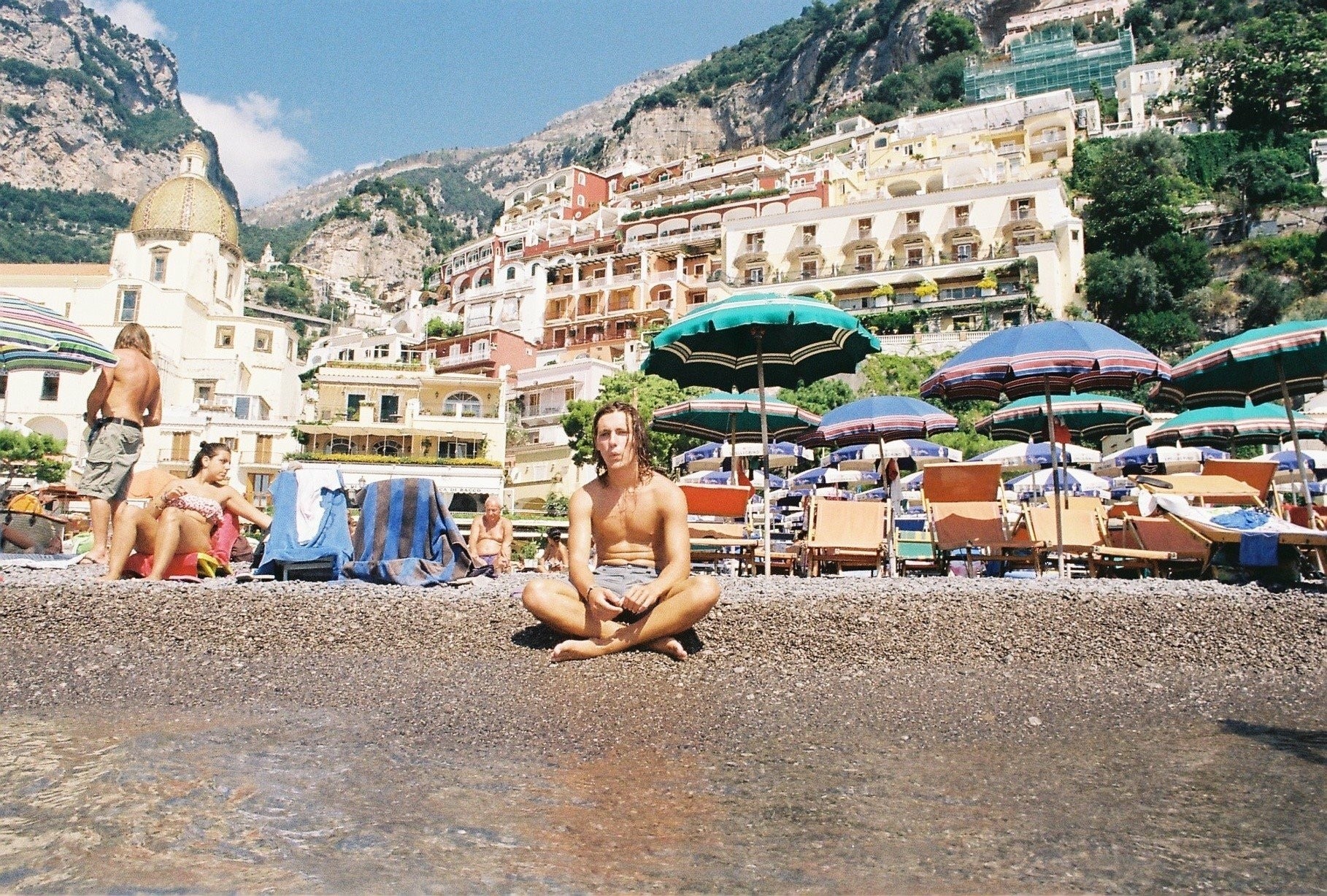 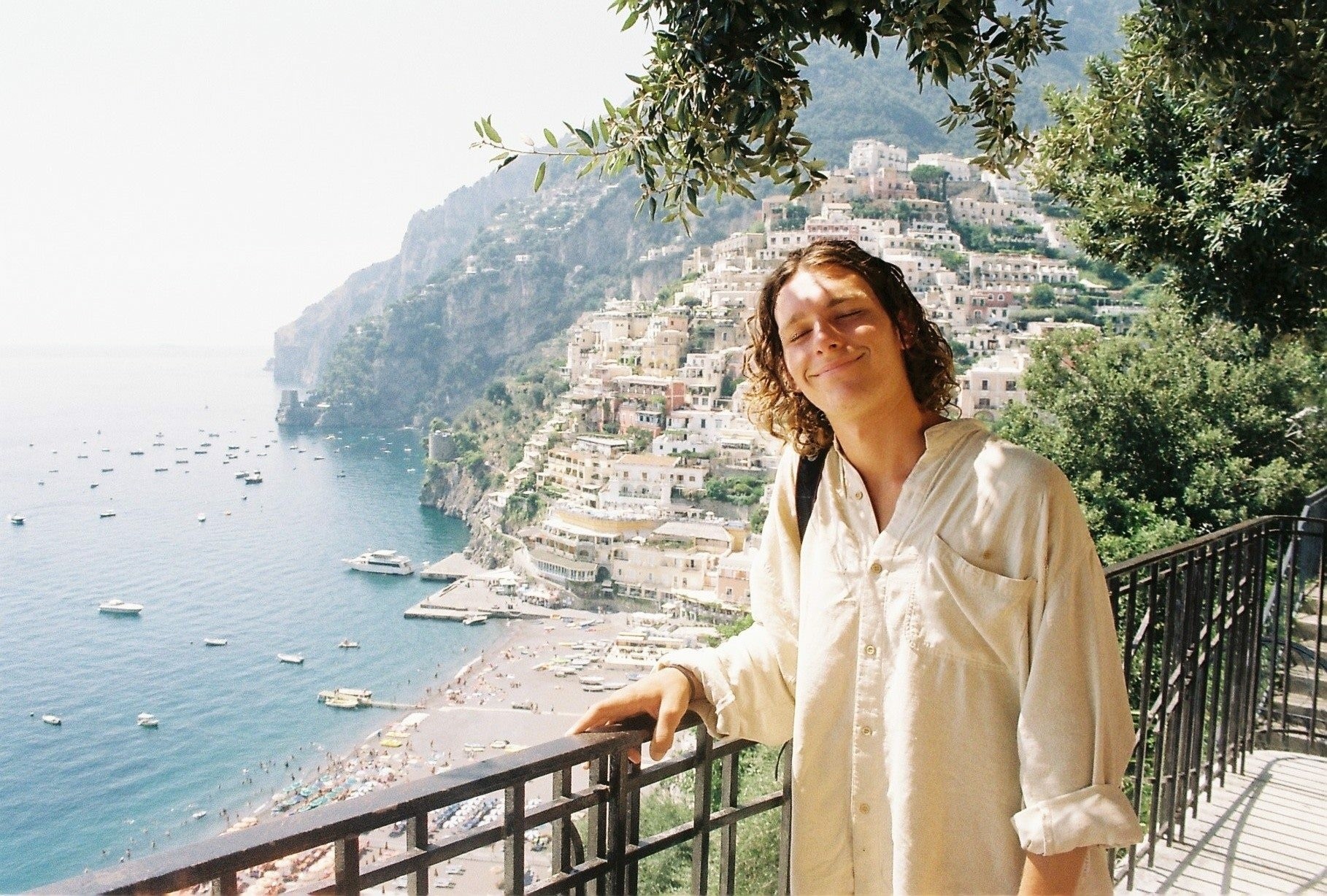 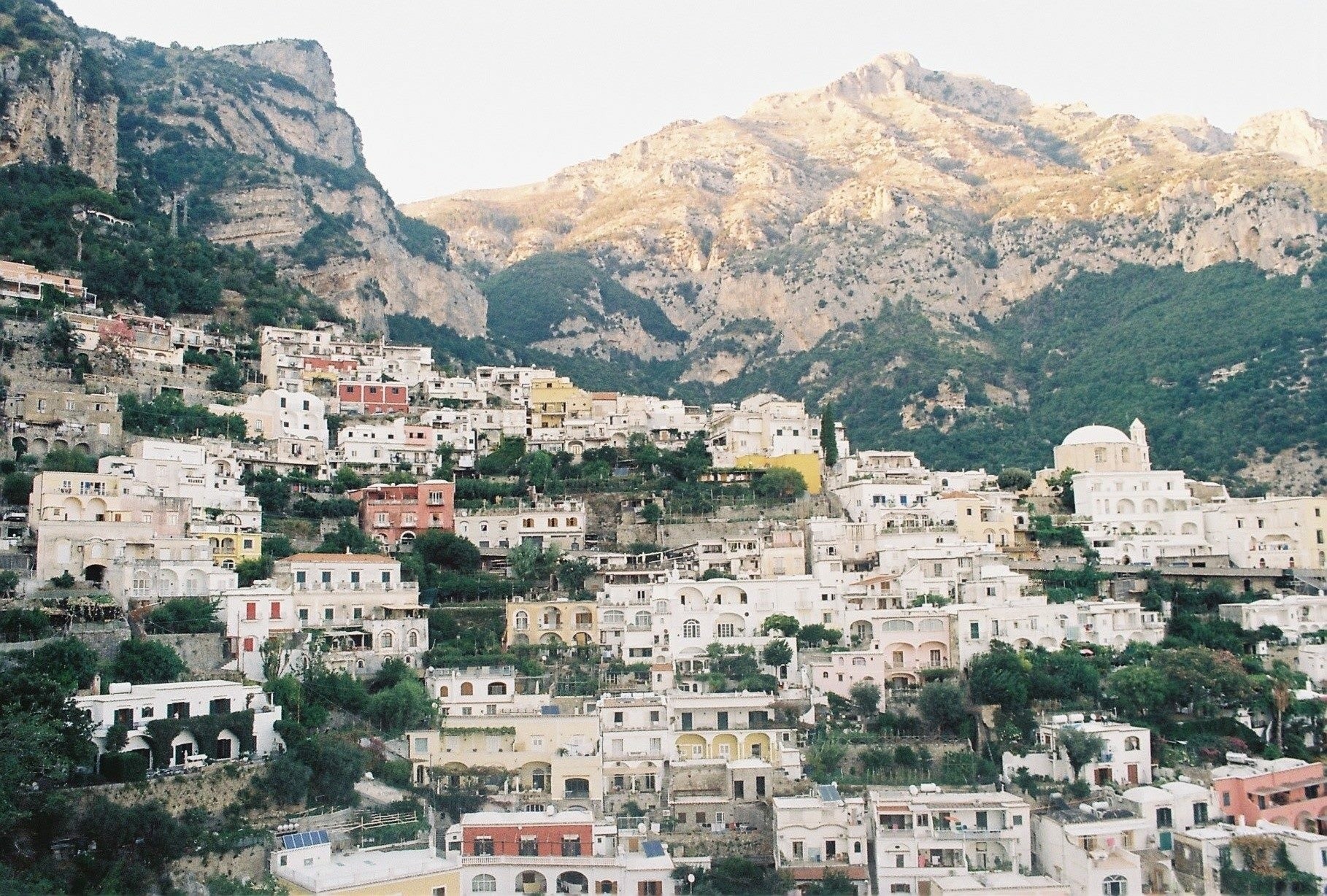