A guide to Istanbul 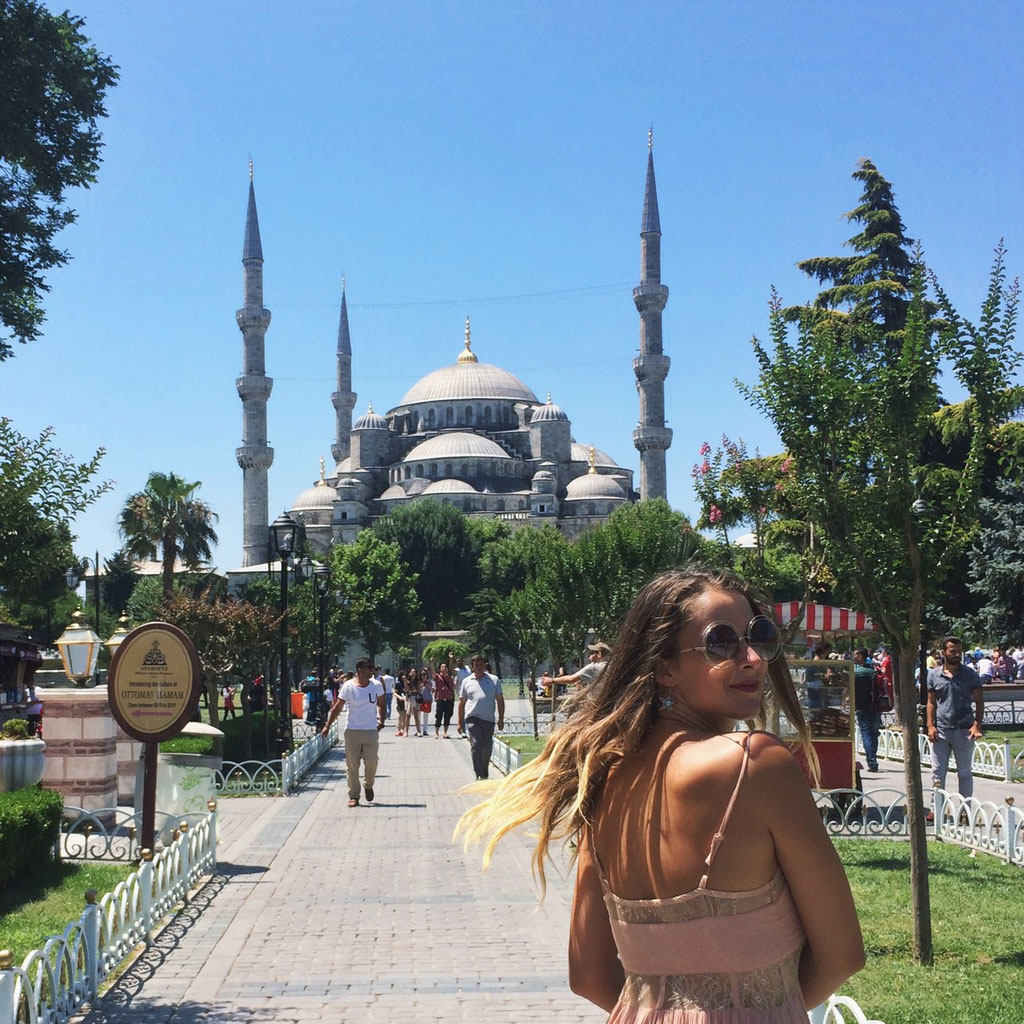 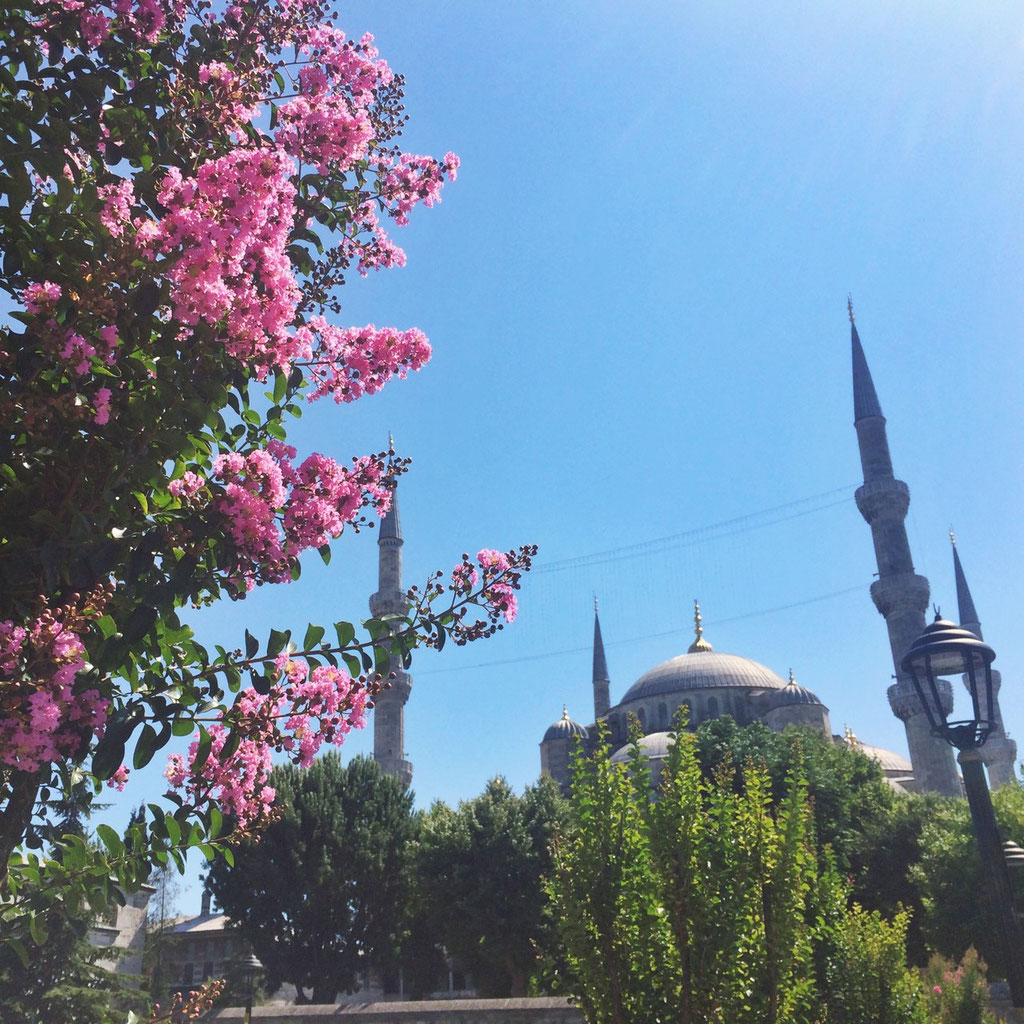 A month into our trip after a night spent sleeping on the side of the road in Montenagro and spending 5 hours in an airport in Serbia, we arrived in Istanbul. We were exhausted and hot (a sensation I had gotten used to) but as soon as we arrived at our perfect Airbnb our frustrations were soon forgotten. We unpacked, showered and ventured out into the most chaotic (in the best possible way) city I have ever seen.

Our Turkish adventure continued as we traveled inland to Cappadoccia then south to the Aegean coast where we sailed for 4 days, darting in and out of pristine Turkish coastline. We then spent a few nights sleeping on the beach in Kabak and Butterfly Valley, two of the most naturally beautiful places I've been to. On our way back up to Istanbul we visited Ephesus and the small town of Selcuk and then Pammukkale.

I've been asked many times whether I felt safe in Turkey and the answer is yes. Turkey has been given a bad name and for no reason! Although I was travelling with Ebbs I did not feel threatened or uncomfortable once and I doubt it would be different for girls travelling alone. We met so many lovely people who wanted nothing more than to hear about our travels and help us as much as they could. As far as clothing goes, the places I visited were so high in tourist population that wearing normal clothes was fine. I took a scarf with me just in case I was in a situation where I wanted to cover up but other than that wearing modest, normal clothing is fine.

We caught buses/overnight buses between each of our destinations which averaged from $8 - $25. The buses run regularly especially in summer and can be booked a day or 2 in advance at the bus station or online. There was no specific company we traveled with but they are all very similar in quality and cost. 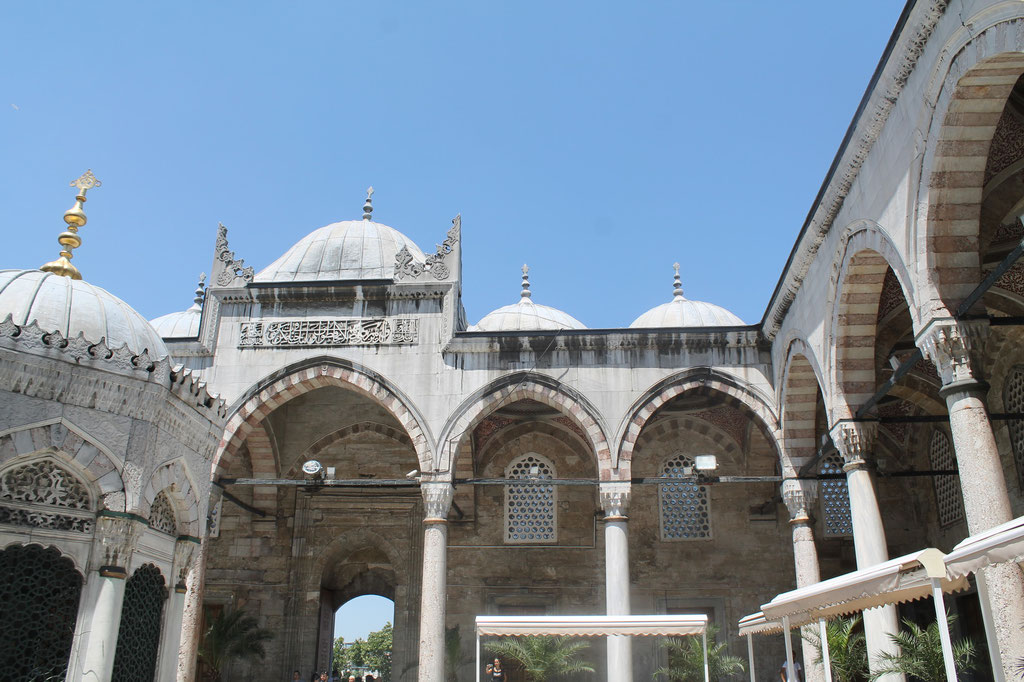 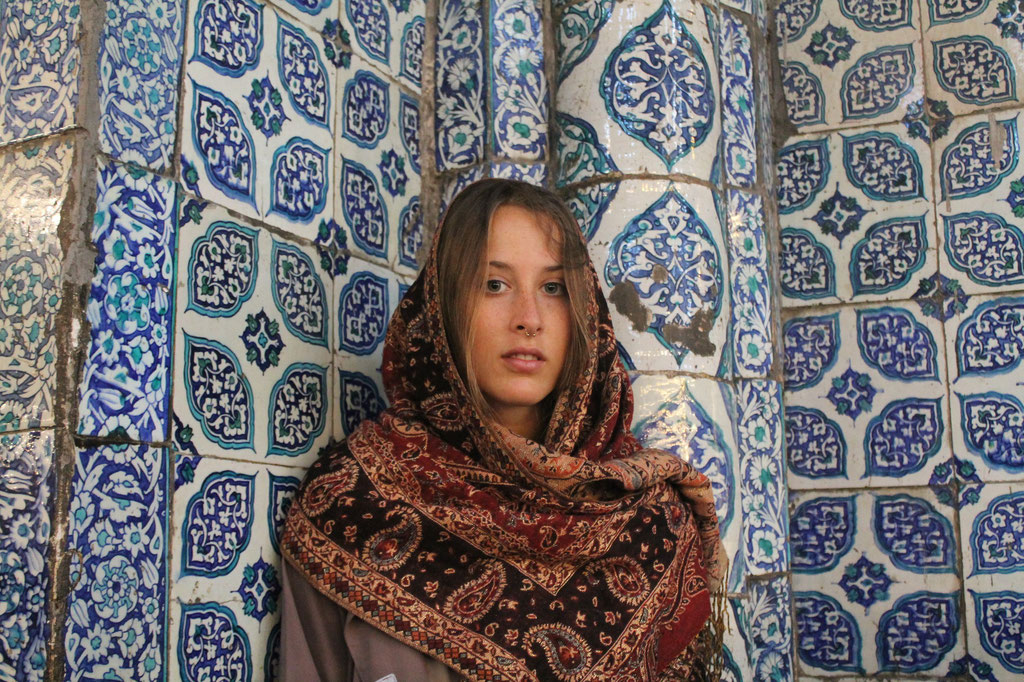 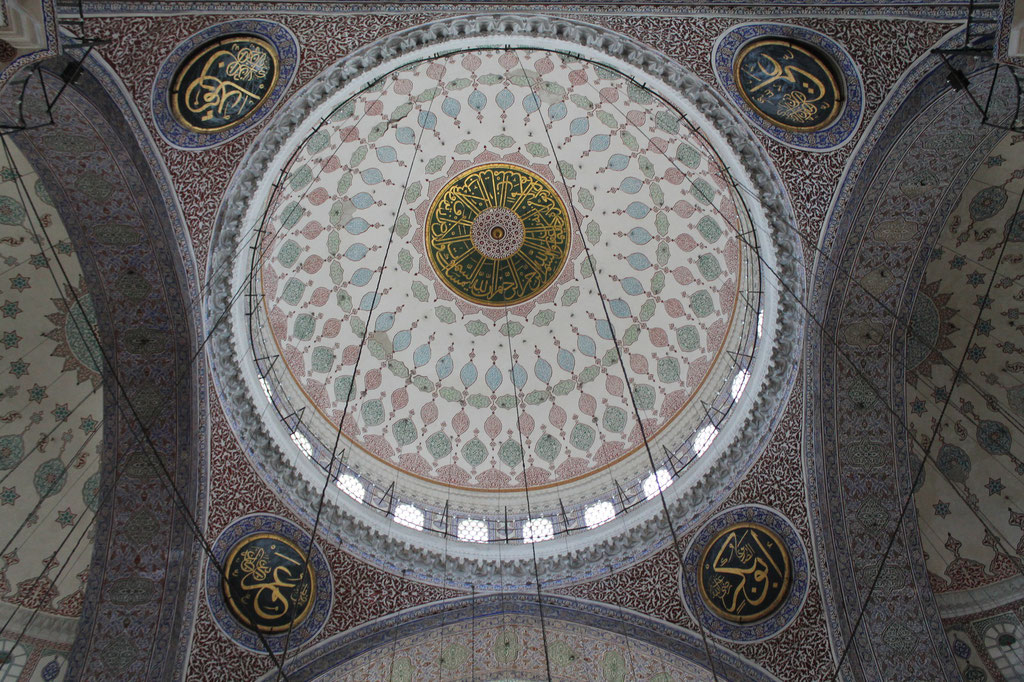 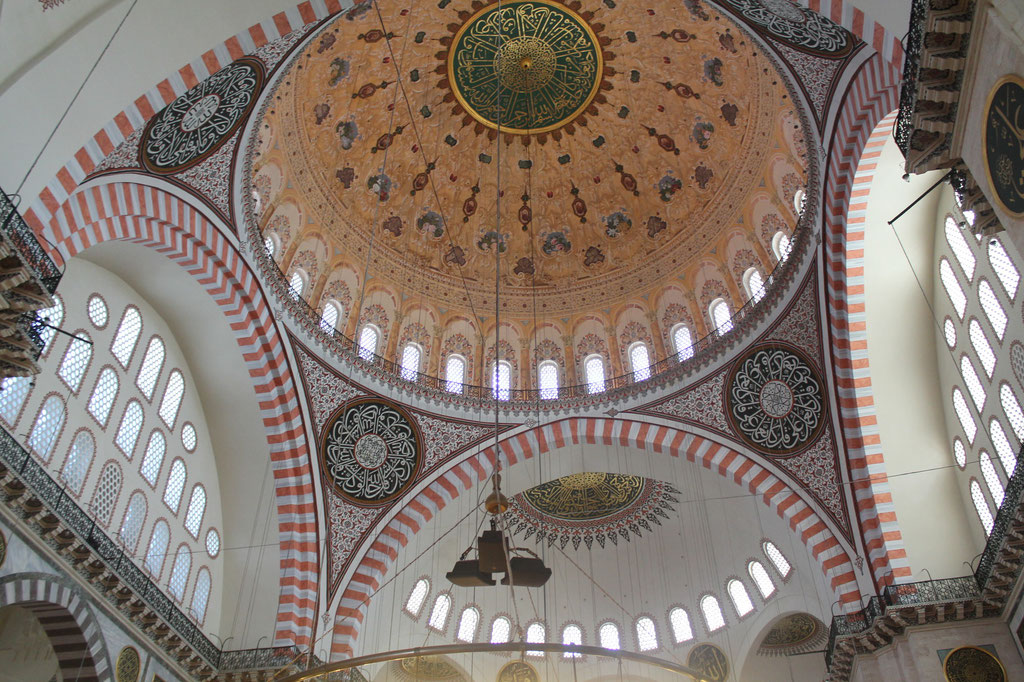 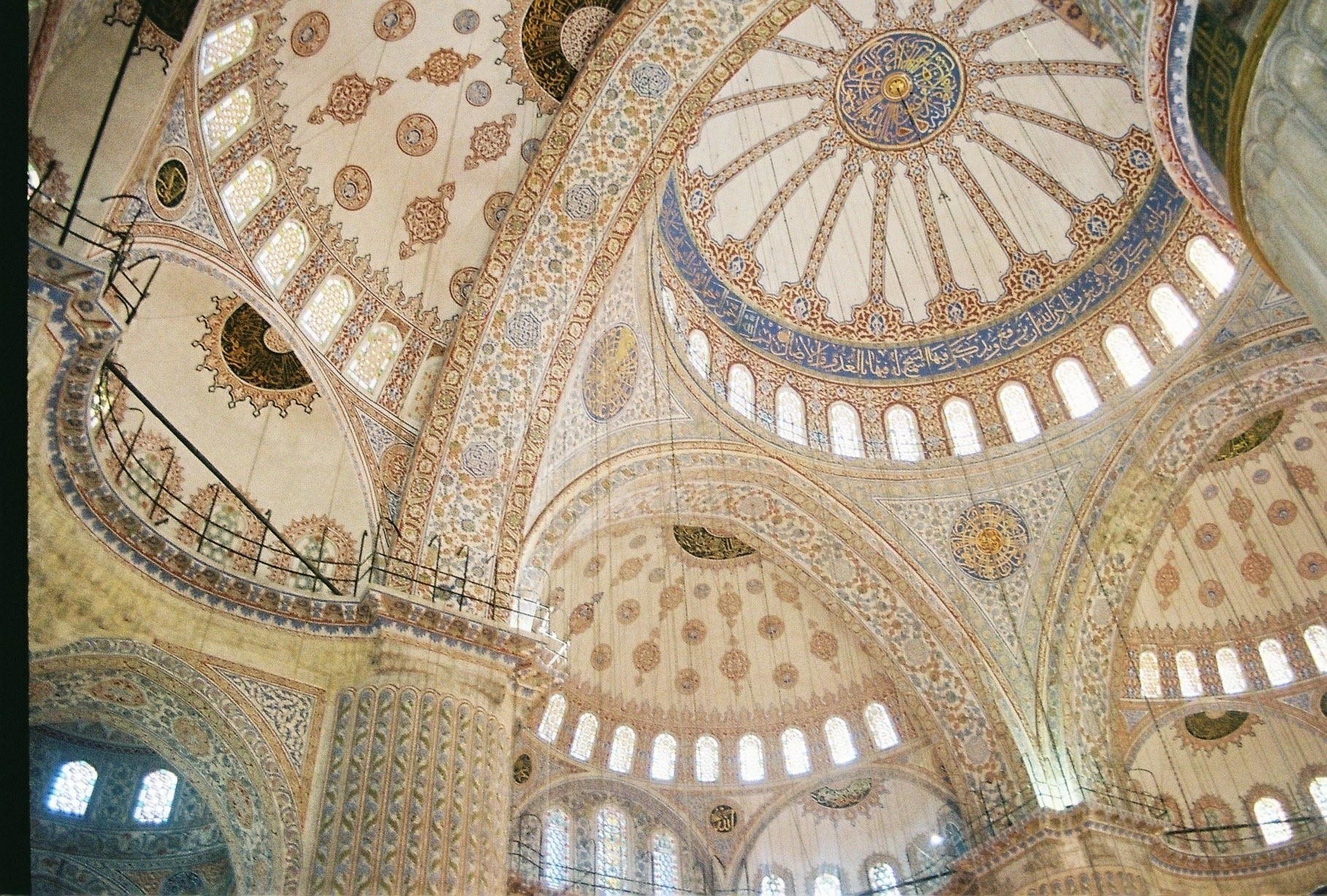 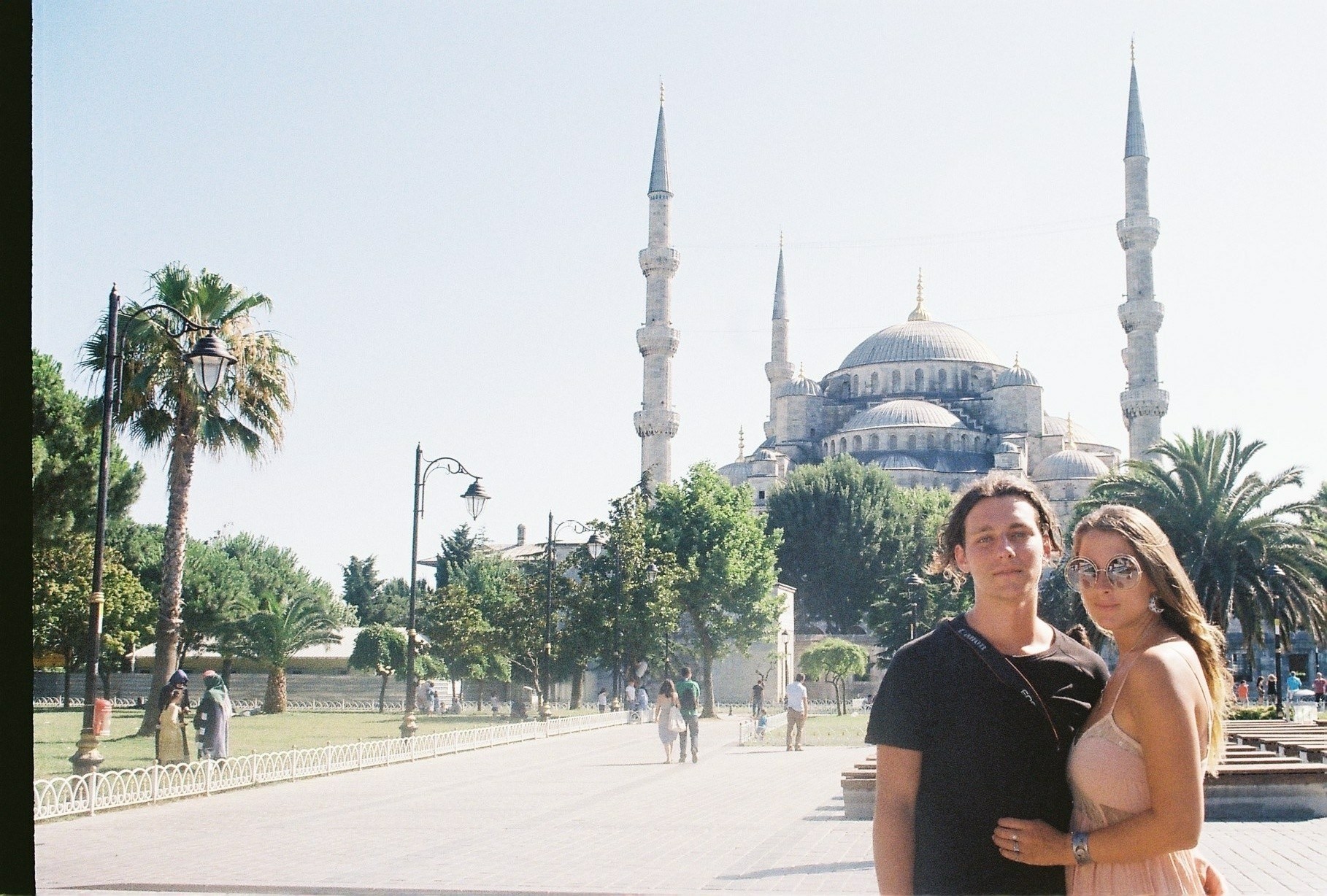 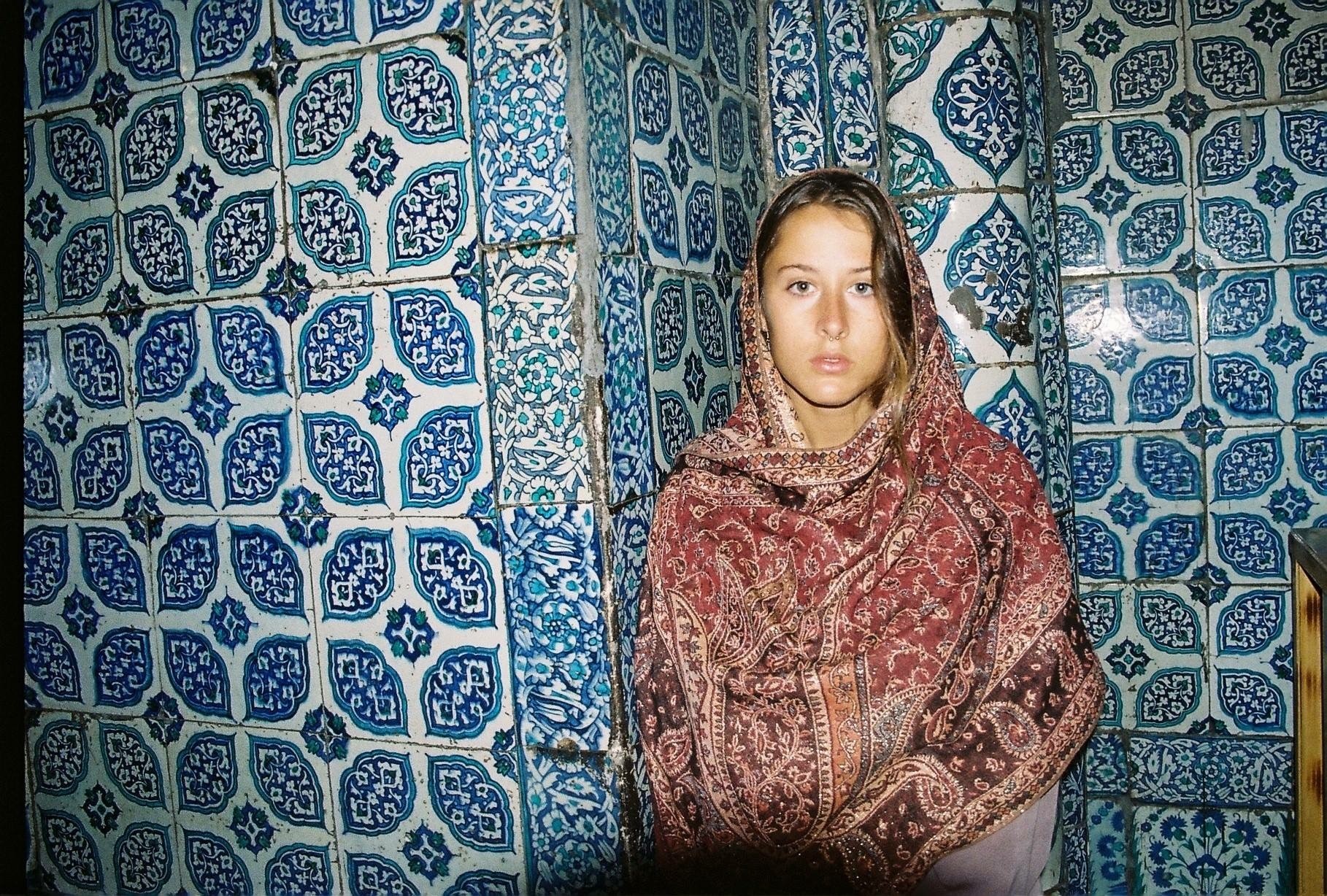 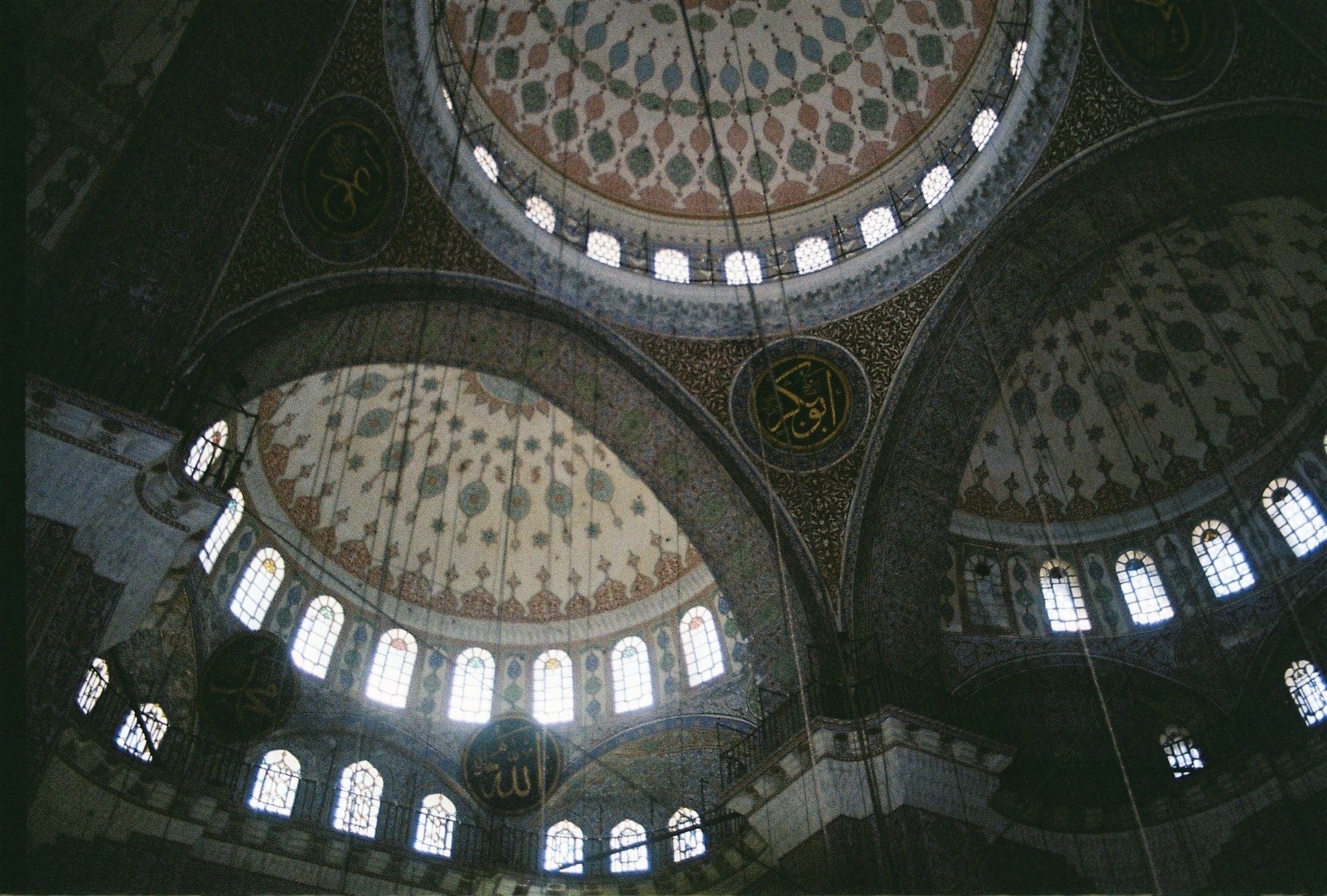 With its cobblestone streets and pastel-coloured buildings, the Sultanahmet district in Istanbul has everything you need – great shops, delicious food and a vibrant atmosphere. Sultanahmet’s central location makes it the perfect base for exploring the city. The area is surrounded by some of Istanbul’s most historical sites. The Blue Mosque and The Grand Bazaar among others are within walking distance and can be reached in a matter of minutes. The shops stay open late and there are night markets serving ‘street-style’ food and delicious treats. There are plenty of nearby cafes and restaurants to choose from, with a variety of cuisines on offer. Most of the hostels in Istanbul are either in Sultanahmet or Taksim (another decent place to stay) so you will have plenty of options. We actually stayed in Balat during our the first time in Istanbul in a beautiful AirBnB with a rooftop that looked out over the entire city. It was $40 a night ($20 each) which was only $5 more than the dingy hostel we stayed in the second time. We hadn't planned on returning to Istanbul the second time around but we found ourselves with a few extra days before our flight to Budapest so we checked ourselves into the Orient Hostel in Sultanahmet. We didn't book in advance, just turned up and they had plenty of beds available. Beware the 40 person dorm in the basement is dingy and whilst it was the cheapest (although not that cheap) at $15 a night we didn't exactly enjoy our stay there. The location was good though and for someone on a budget (who doesn't mind the dark) it would be absolutely fine. 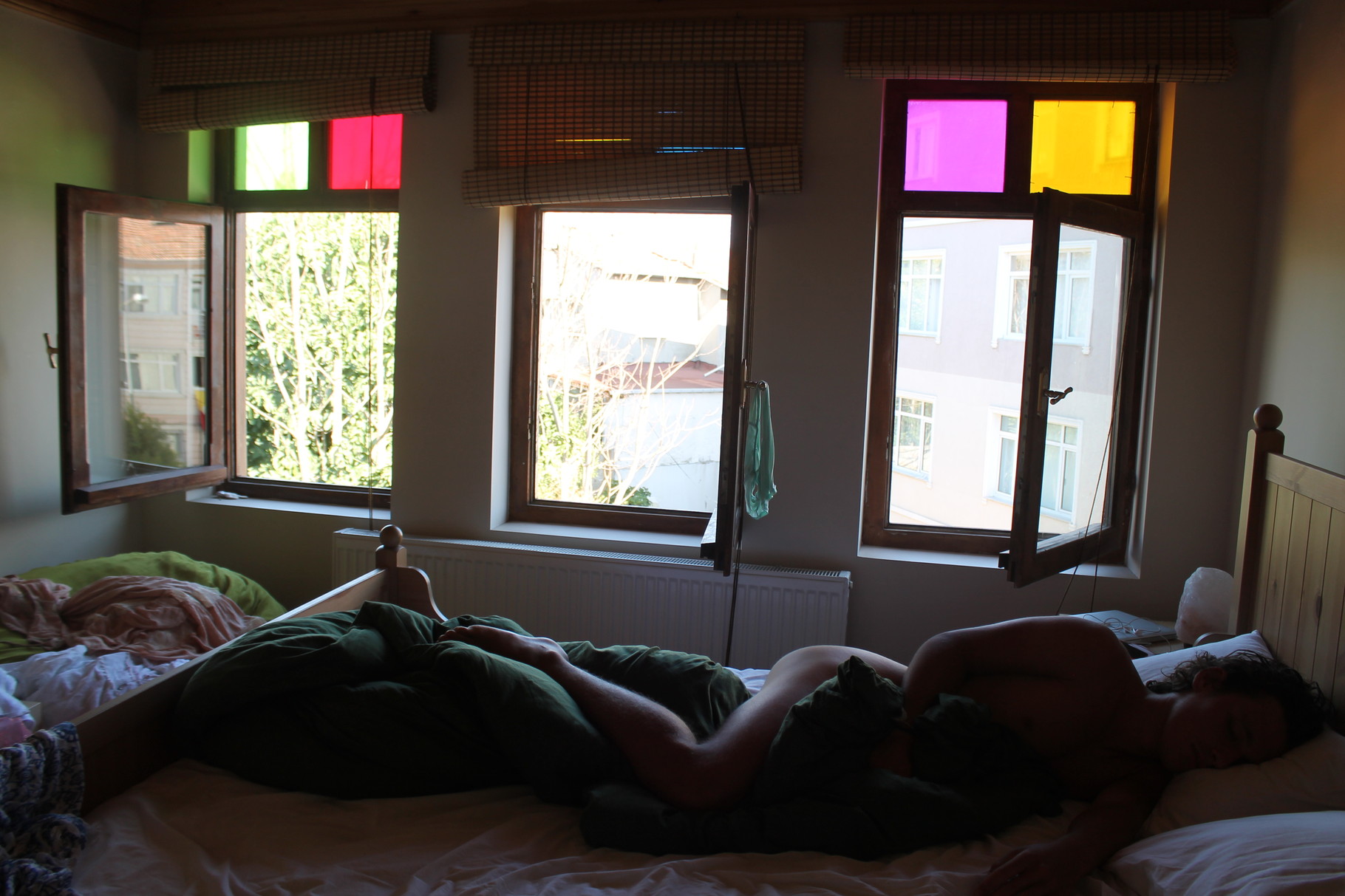 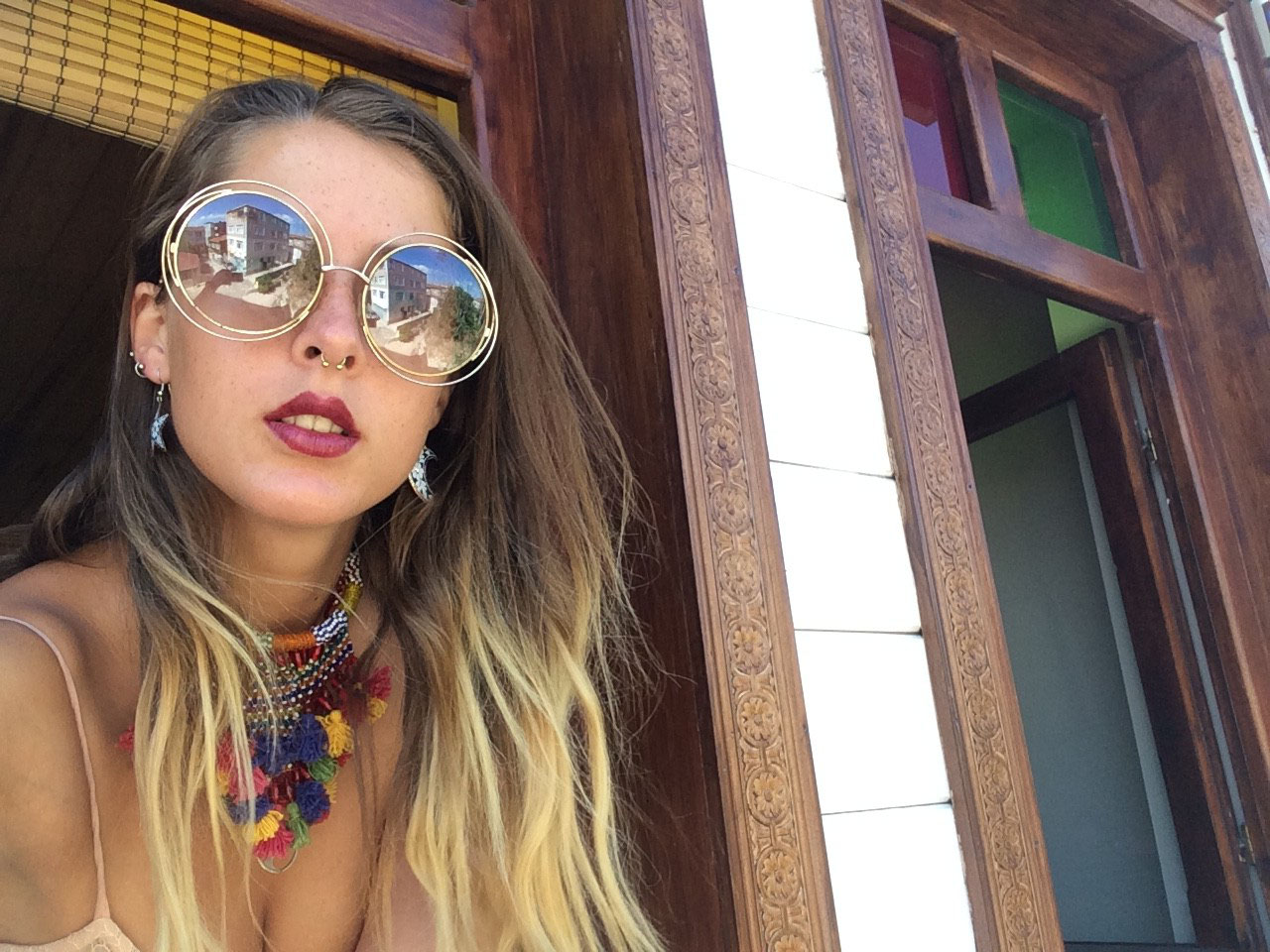 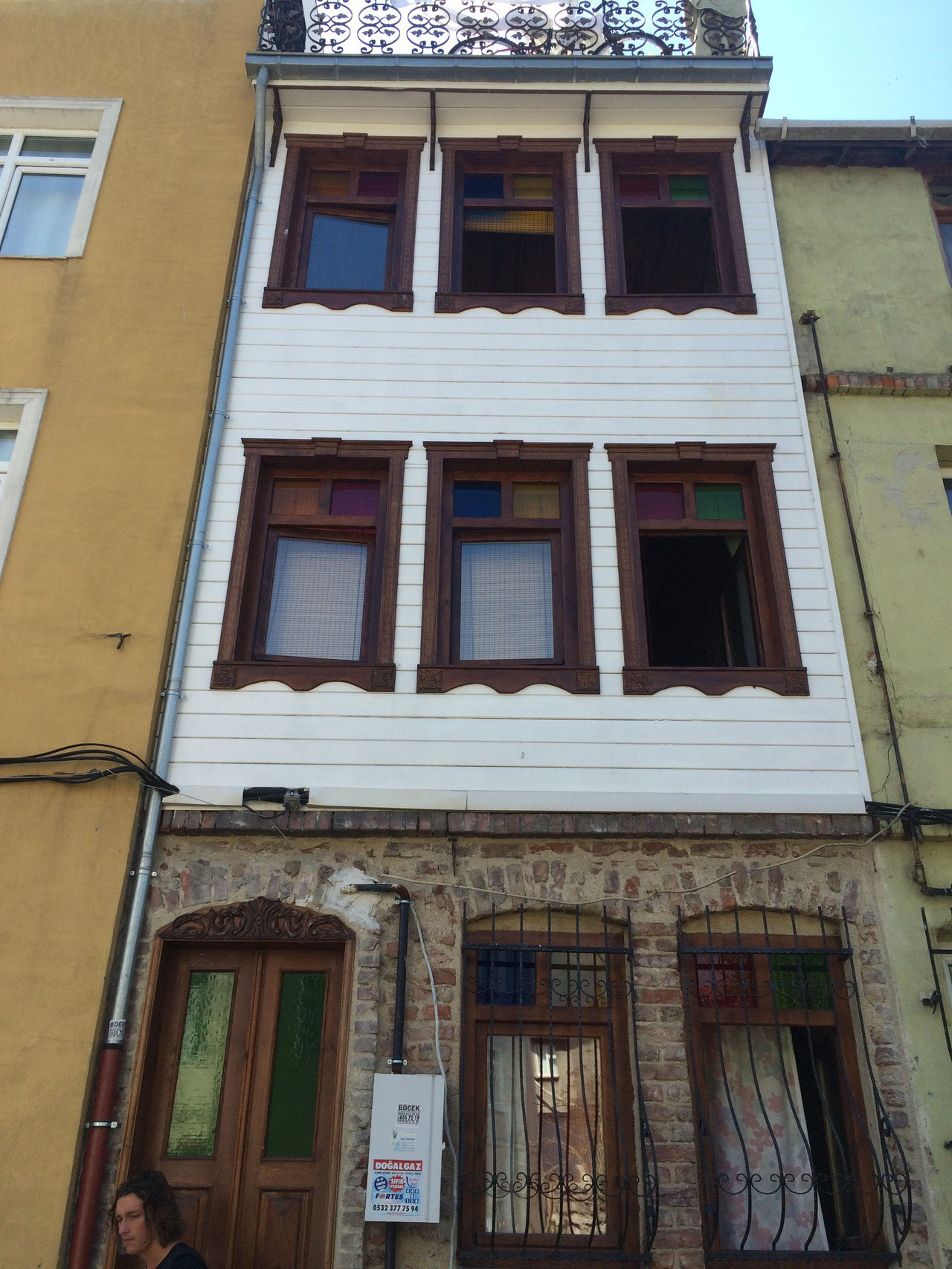 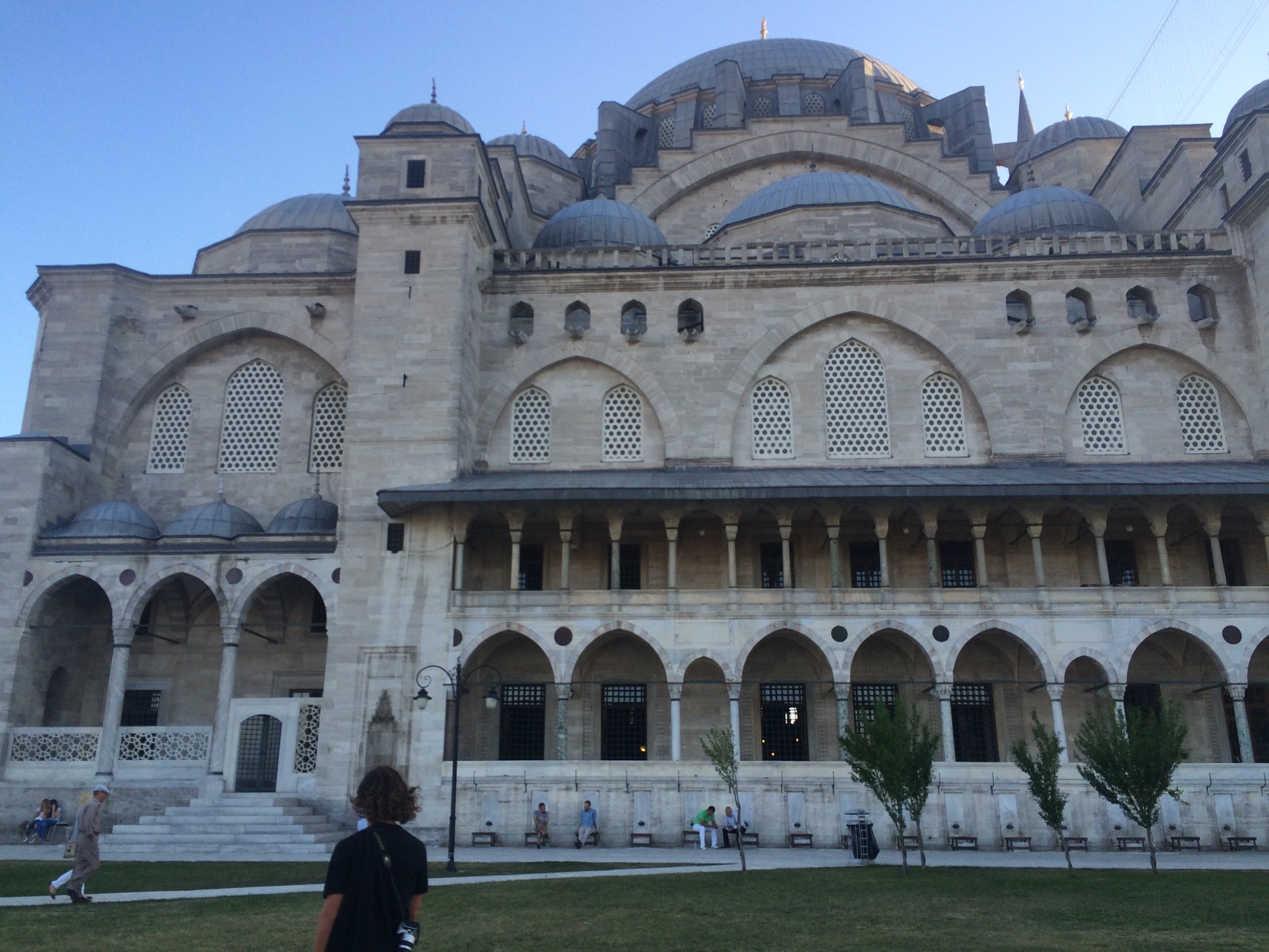 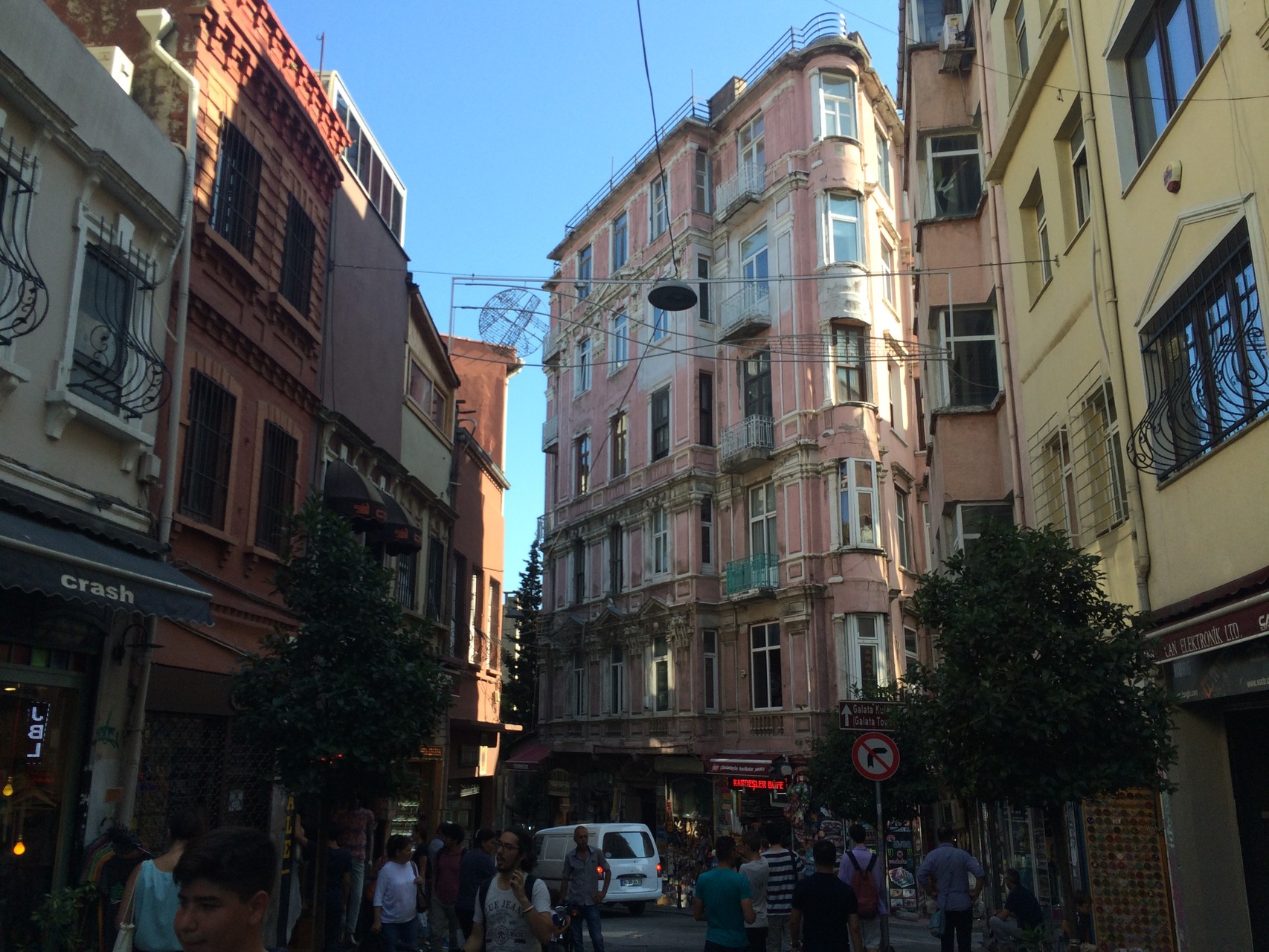 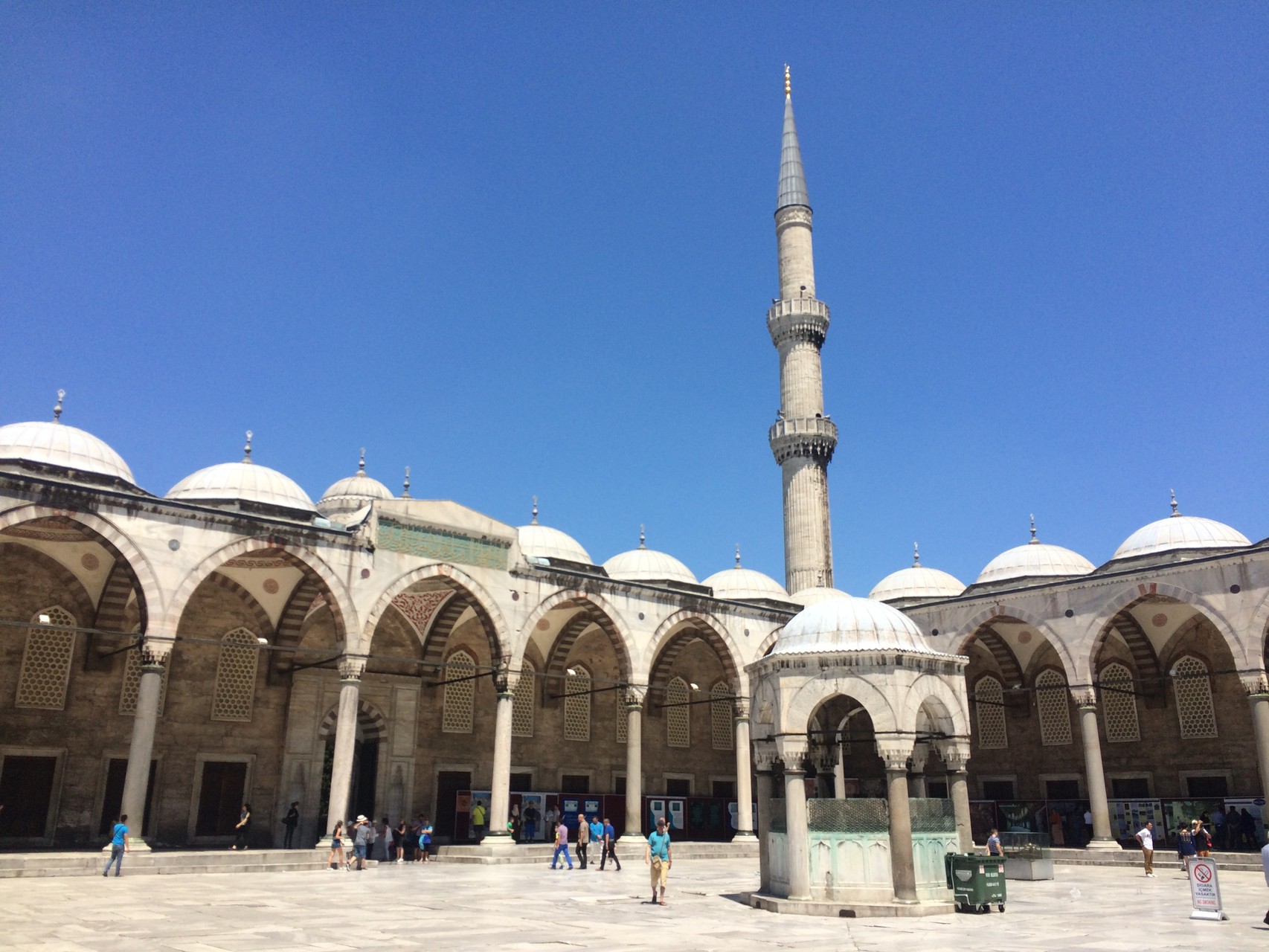 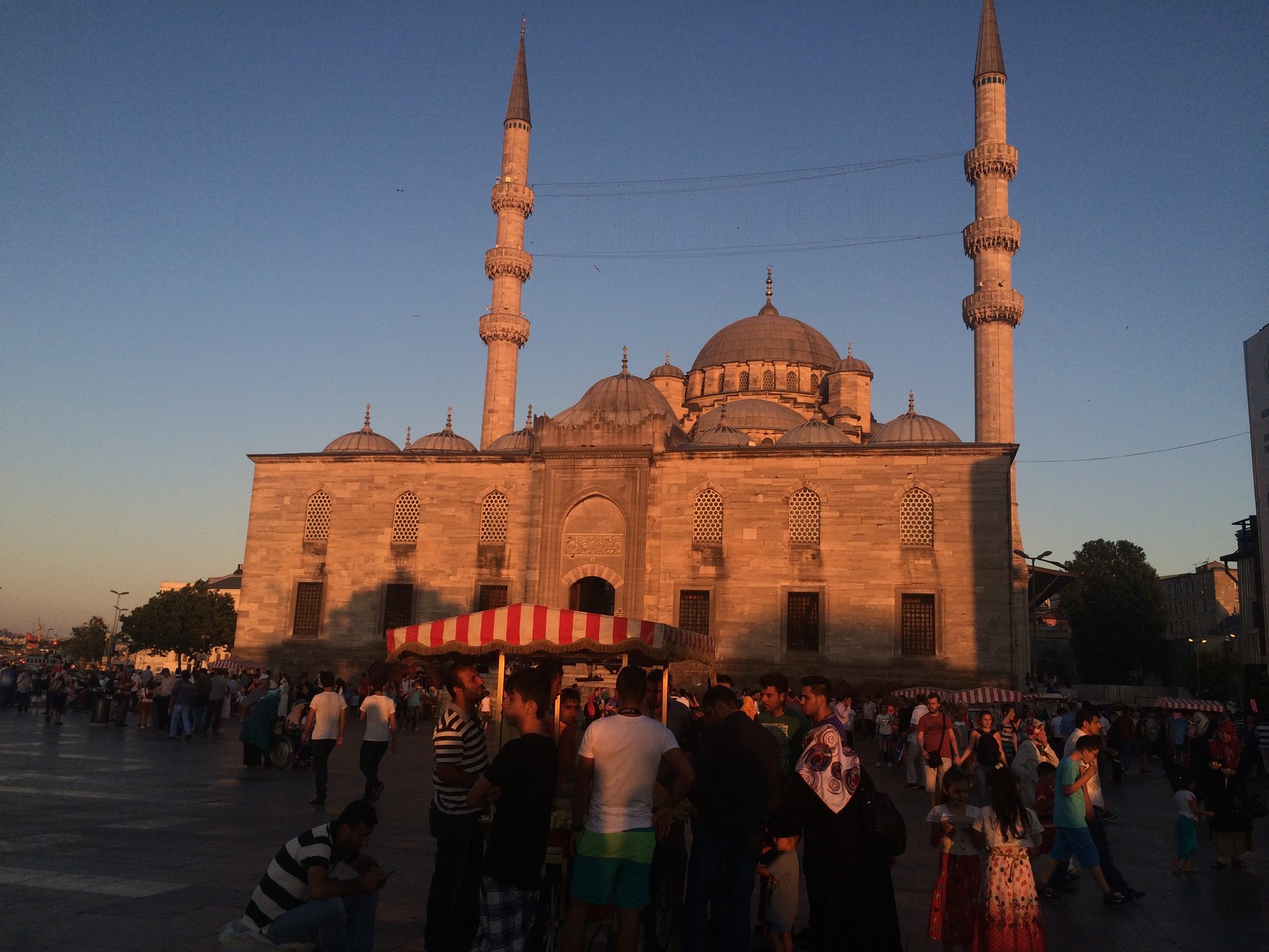 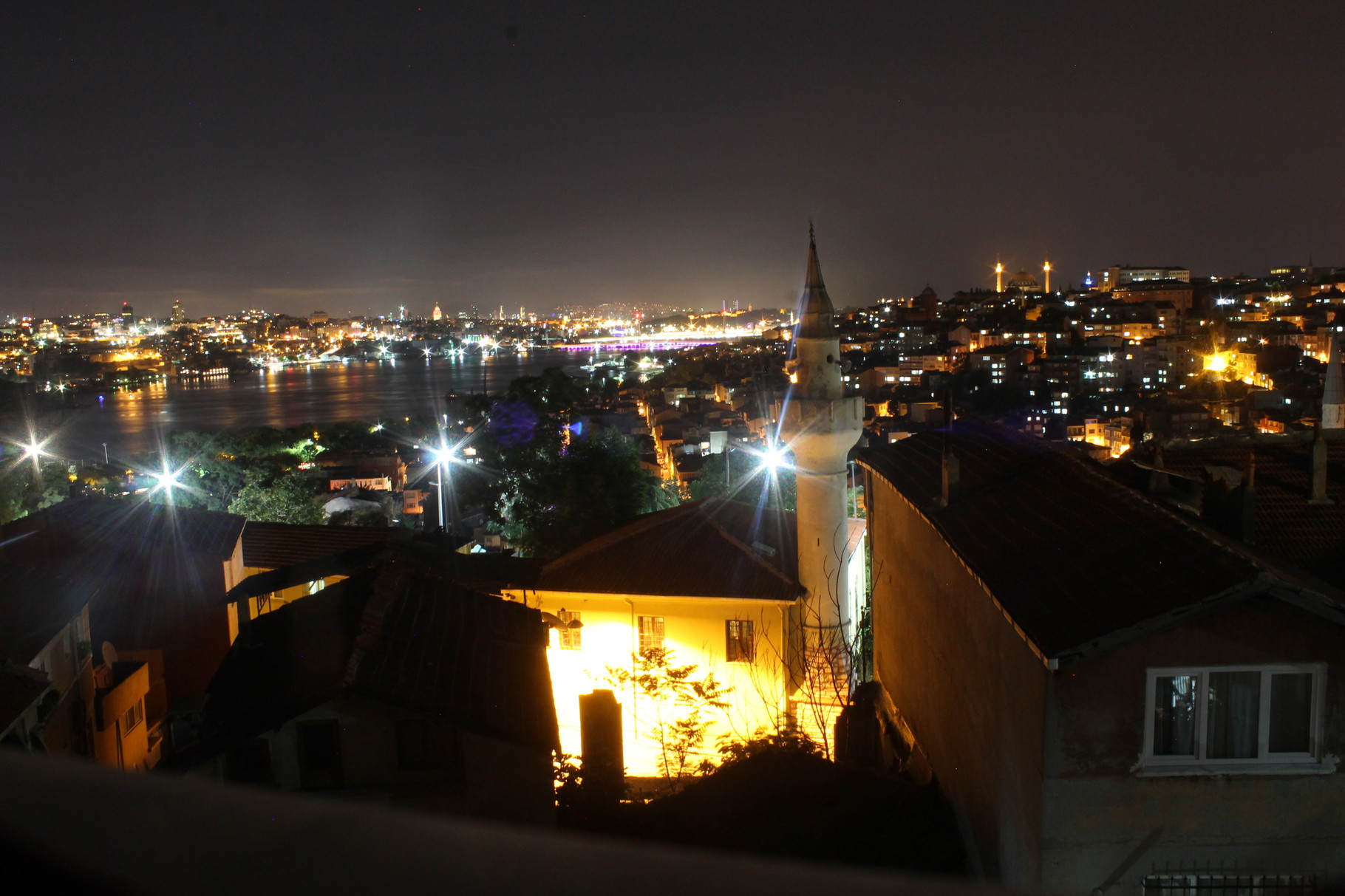 In this city, it’s almost impossible to get a bad meal. Turkish food is mostly Mediterranean based and is hard to dislike. Think – Turkish bread, freshly made dips, grilled vegetables, skewered meats, kebabs and lots of corn on the cob! Most restaurants have a broad menu and offer a variety of dishes for decent prices. We usually stuck to the basics because they were cheaper and we knew what we liked. For breakfast every morning we'd buy a corn on the cob and a Nutella pretzel for $1 from the red carts spotted around the city. The people we were staying with made us endless Turkish coffees which we drank sitting on the roof overlooking the city. Make sure you try Turkish coffee as it is a really unique flavor and consistency. We ended up sending heaps of packets home!

For first timers try these foods: 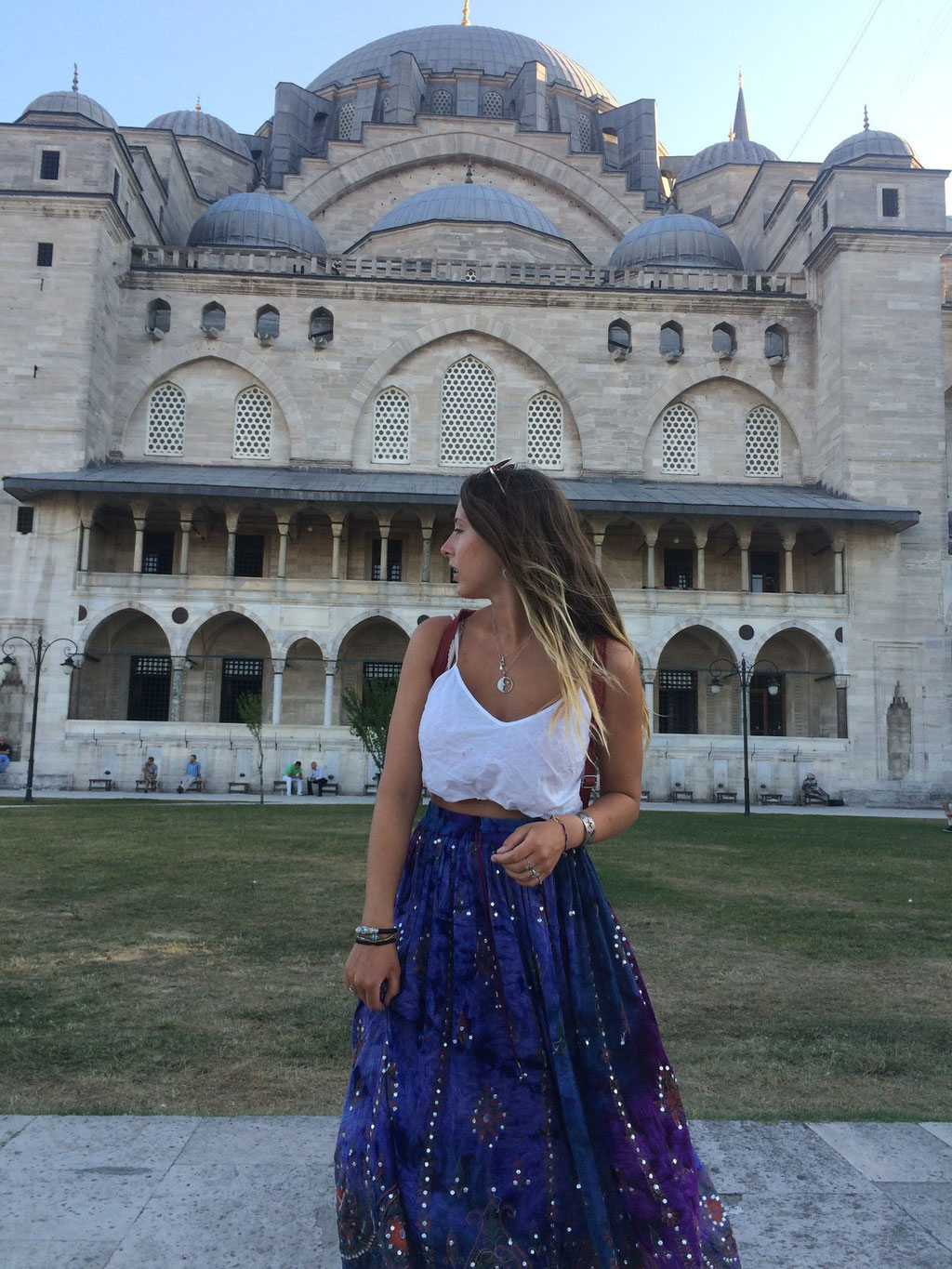 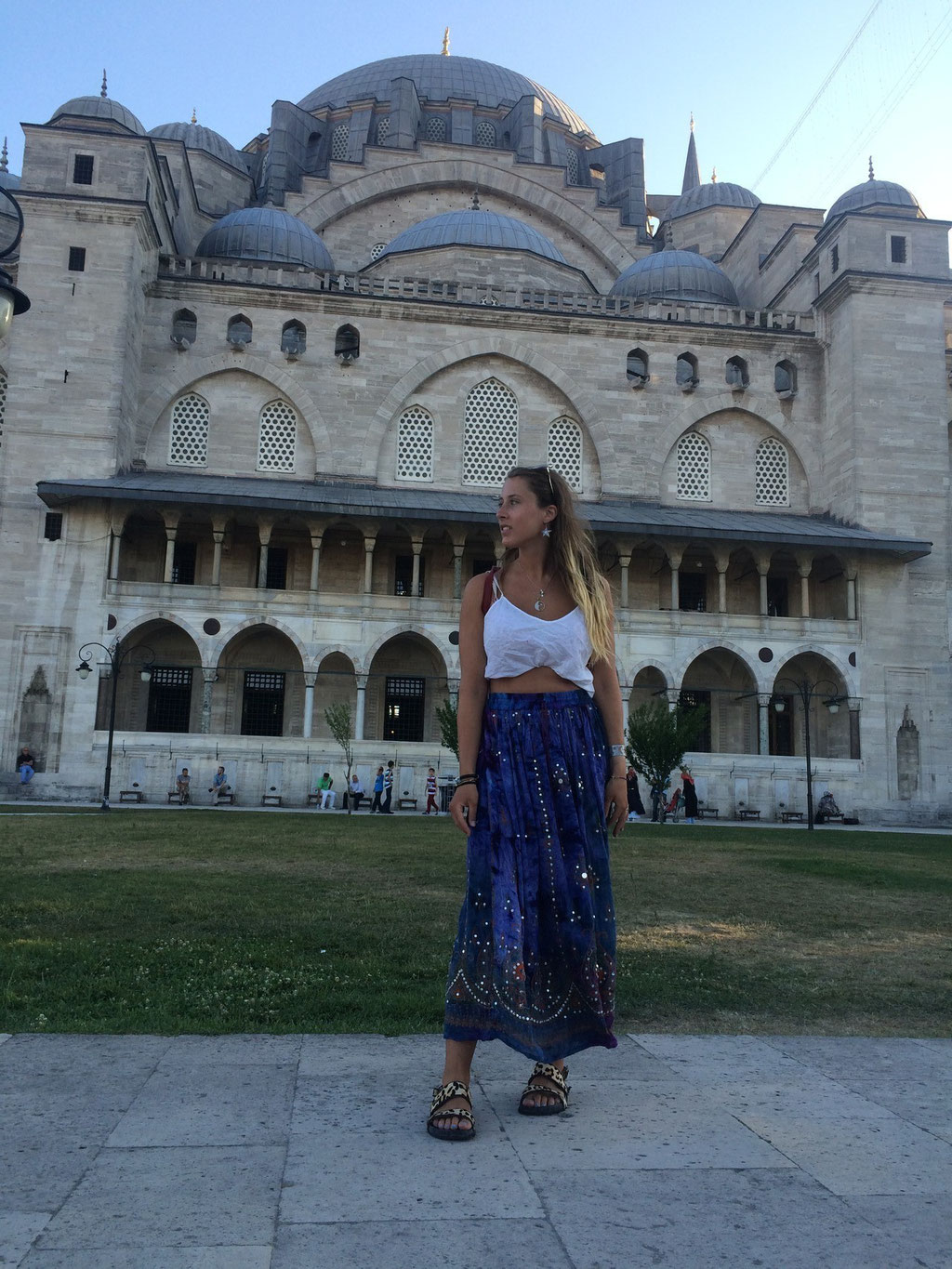 The Blue Mosque is arguably Istanbul's most famous attraction and for a good reason! Also called the Sultanahmet Cami, this six-minaret mosque dates from 1616. Suitably named because of the tens of thousands of blue, Iznik tiles that decorate the interior's high ceilings and vast central dome. It is open at all times outside of prayer sessions and the same goes for all the other mosques in Istanbul. There is no fee to enter any of the mosques and they will provide you with scarves and long skirts for free if you do not have your own. To avoid crowds, aim to visit the mosque in the early morning or late afternoon, as its a popular tourist destination and the lines can become quite lengthy. The other mosques scattered around the city are just as spectacular so if you walk past one and it isn't prayer time go in and have a look!

If you are in Istanbul for more than a few days try and grab yourself a 3 day museum pass. They are $40 and give you unlimited entry into all of Istanbul's main attractions. They can be purchased at most museums such as the Hagia Sophia and will save you heaps of money as most individual entry fees are around $15.

With this pass make sure you visit Hagia Sophia: a former church, mosque and now official museum. It may seem dull from the outside, yet the large interior with its domed ceiling, upper galleries, Islamic calligraphy discs and Christian frescoes is impressive, stunning and leaves a hard-core imprint on your memory. The Topkapi Palace which was the first home of the Ottoman Sultans is a treasure chest of antiques including clothes, jewellery, and armour and definitely worth seeing.

The Grand Bazaar is so massive its hard to know where it starts and ends. It’s one of the largest covered markets in the world and with over 4000 stores full of jewellery, antiques, hand-painted ceramics, clothing, embroideries and rugs. Allow yourself to get lost in the narrow lane-ways and try your hand at the art of bargaining. Its easy to get overwhelmed with all the colour and enegy this place gives off and Ebbs got pissed off within the first hour of my ums and ahs about what I should buy. I ended up coming here alone while he went to a music shop so I could shop at my annoying snail pace. The shopping is pretty unique so i'd put aside about $100 (if you're a girl that likes sparkly things) to spend at the markets and various bazaars.

The Bosphorus is a 32km passage that joins the Sea of Marmara with the Black Sea in Istanbul, separating the continents of Europe and Asia. Bosphorus cruises depart from the main Istanbul dock every half hour and are a great way to see the city from a different angle. Tickets are $6 pp and the round trip is usually 2 hours. Do it at sunset as its cooler and is obviously the prettiest time to be on the water. We sat at the back with our legs dangling over the side of the boat and ate our dinner which we had bought with us. It was a fairly romantic evening (: (:

Other places to visit within Istanbul include Taksim Square/Galata Tower (where there are lots of music shops fyi) and the streets of Sultanahmut with their colourful buildings and bustling cobblestone streets. Dolmabahce Palace on the edge of the Bosphorus is also truly spectacular and known for its 'gates to the ocean'. Also make sure you find a rooftop to watch the call to prayer from at least once!

As far as getting around the city goes, buses run regularly however the roads are congested so it is recommended that you walk where you can. It is a massive city so don't try and cover too much ground in one day. 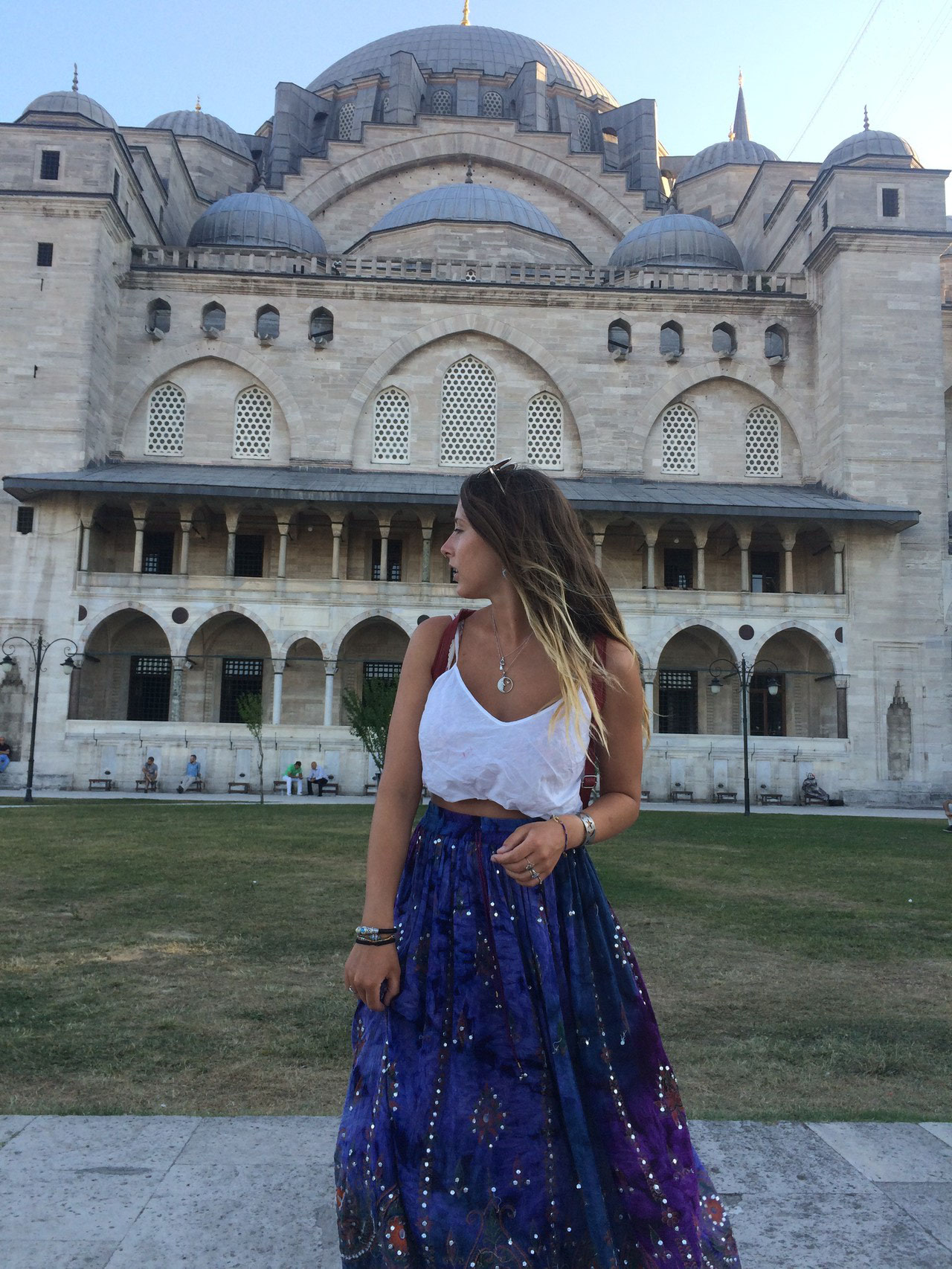 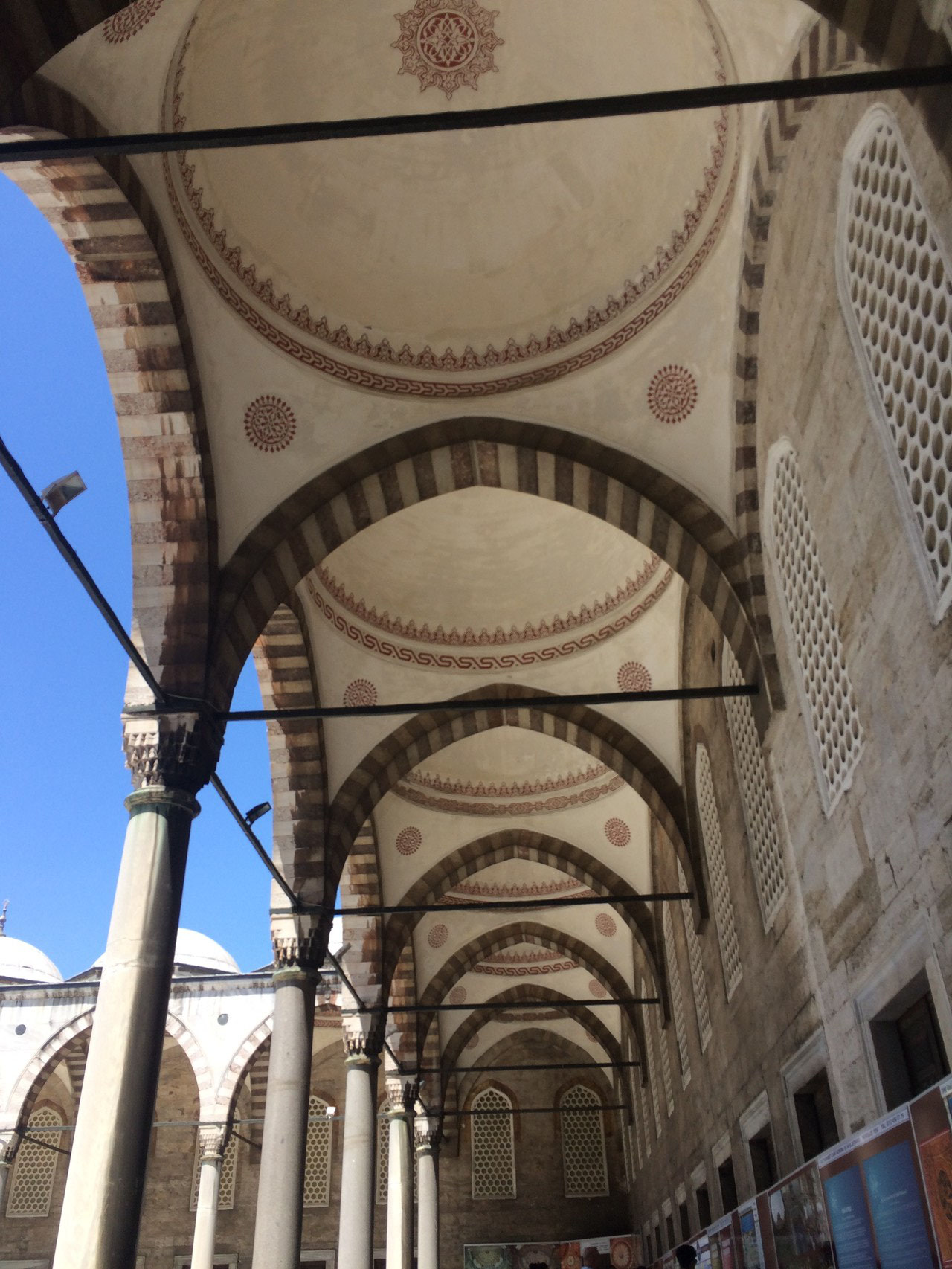 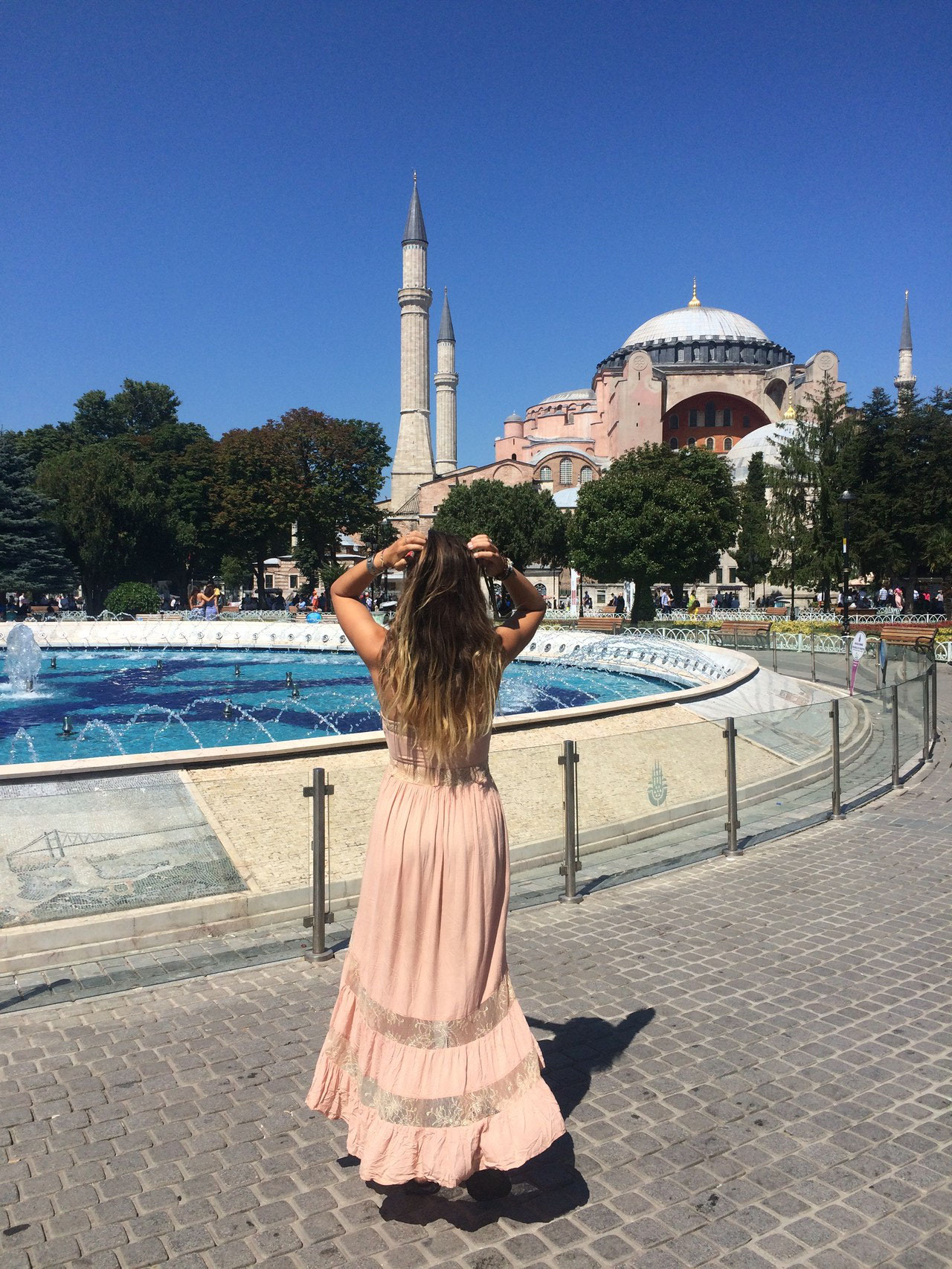 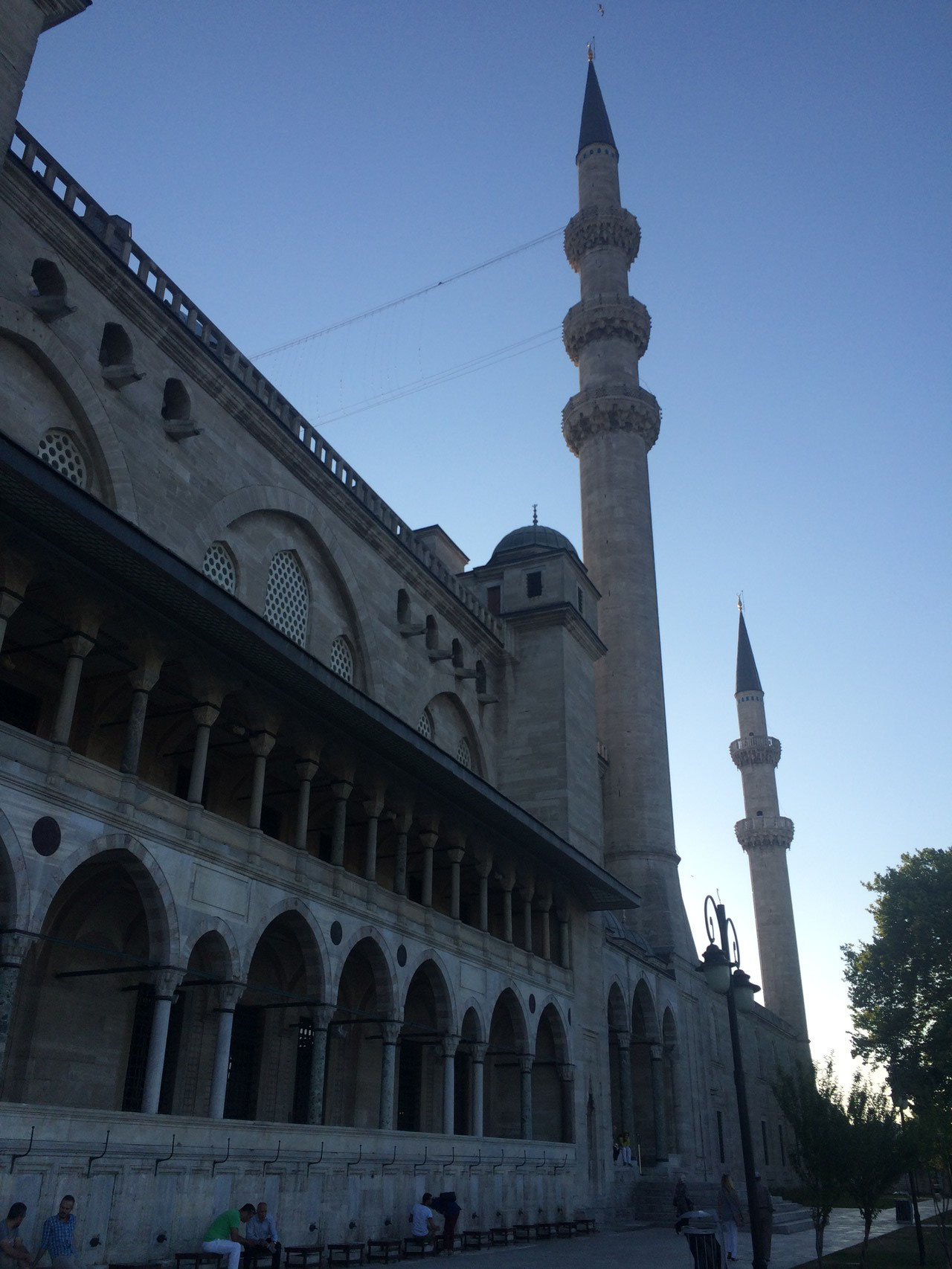 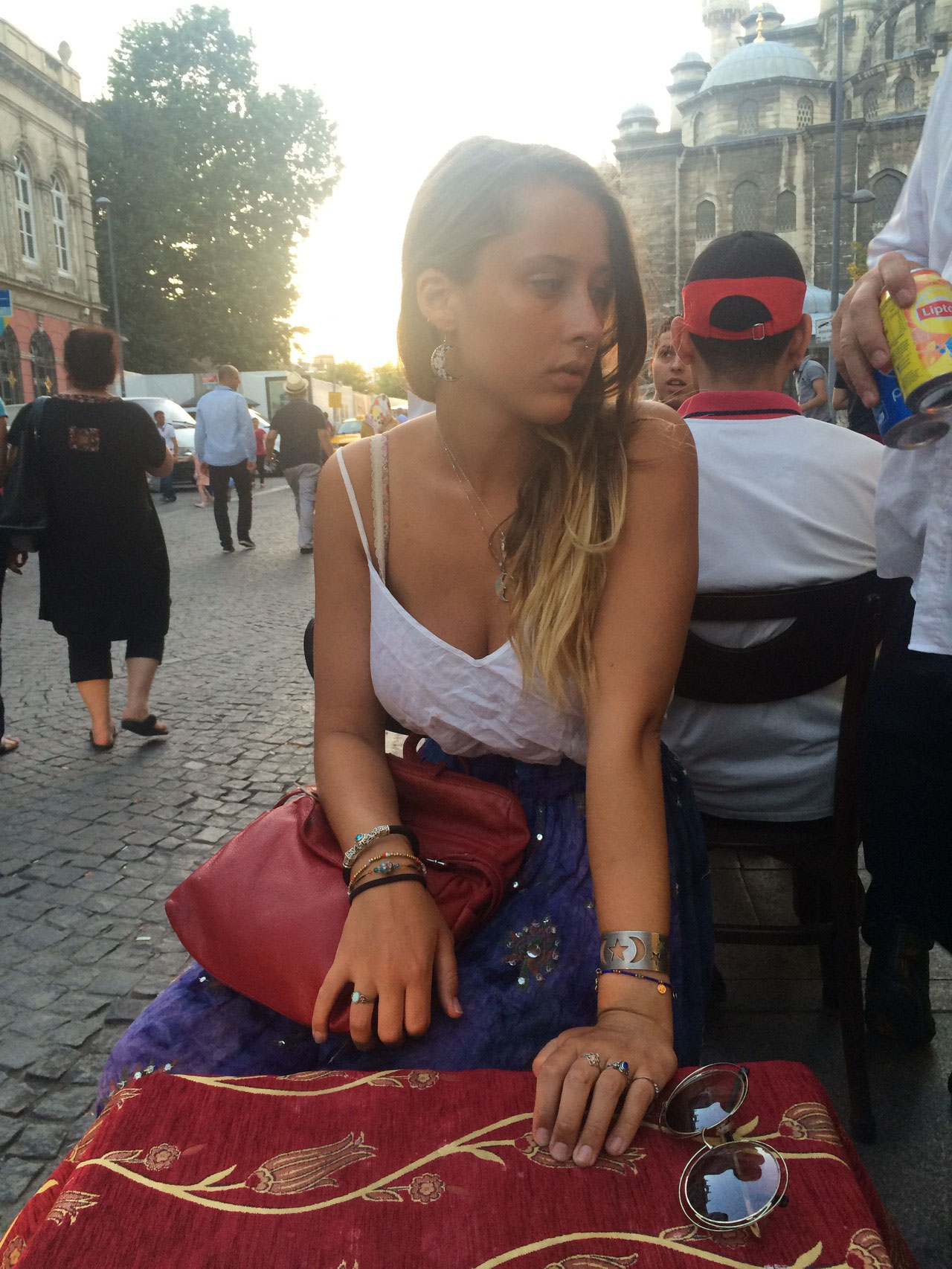 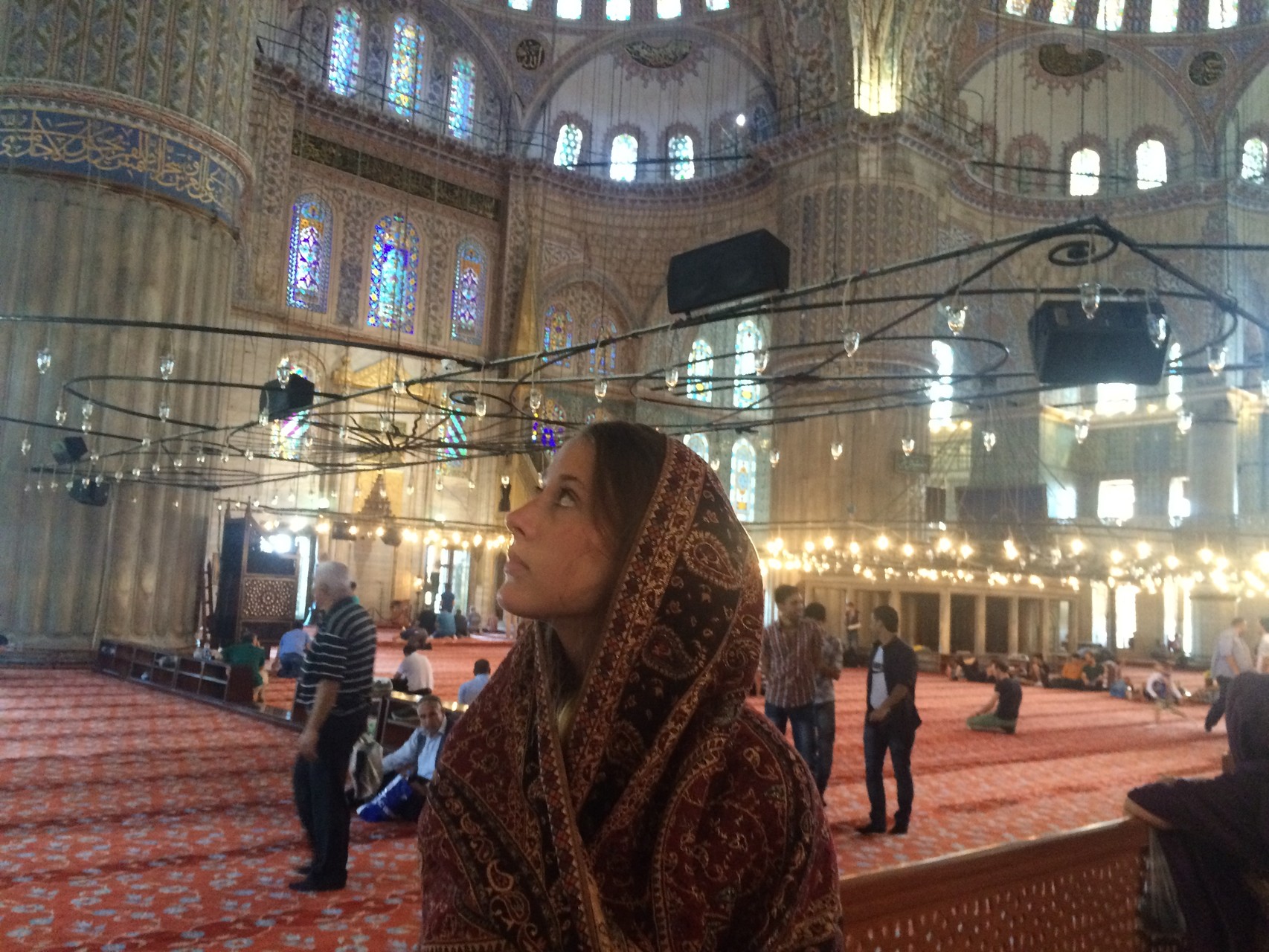