Fez and the RIAD

The day we arrived in Fez was probably the most challenging and stressful of our entire trip but ended in the most glorious manner possible. We started our day in the Sahara desert where we left our tour group, who were headed back to Marrakesh and attempted to get on a bus (which we were ill-advised was a common thing to do) to Fez. Our first alarm bell was when our tour driver was confused when we told him we were leaving for the bus, after being told people did this all the time when we were booking our tour back in Marrakesh. Determined to be successful, despite our tour drivers concern, we climbed aboard a local bus that we were told was going to Fez. We had no real way of knowing ourselves as the signs were all in Arabic and once our tour driver had left no one spoke a word of English or even French (which even though I am no where near fluent is far easier to translate than Arabic!) I had read that the trip took around 7 hours. The bus left about 10 minutes after we climbed aboard. The entire journey everyone on the bus bore their eyes into our backs, not wavering their stare when we turned around. It was a little intimidating to start with but after an hour or so we relaxed. The journey itself was quite beautiful, driving through landscape that reminded me of the grand canyon and the driver gave us the front seat so we had amazing views. As it was a public bus it stopped for every man and his dog (literally every 10 minutes) and in every town, it stopped for half an hour. As you can imagine this stretched the journey out by a considerable amount and as we still had not been able to confirm in English that the bus was indeed going to Fez we began to feel uneasy about 9 hours into the trip. (especially seeing as we were still surrounded by desert). Our discomfort was heightened when our trusty bus driver started doing lines of cocaine off the steering wheel as he swiftly maneuvered the bus around sharp corners as we crossed the Atlas mountains. At 8pm (13 hours later) we finally arrived in Fez. We were the last people left on the bus and I (intelligently) hadn't written down the details on how to get to our hotel. After another hour of stressful running around and hand pointing directions we arrived at the door to our riad. We were both so relieved to finally be at our destination I don't think we would have cared if our bed was a pile of dirt as long as we had somewhere to sleep. However we were more than pleasantly surprised. The beauty of this riad exceeded anything I could describe. It was lit by candles, with a courtyard dripping in vines and echoing with birdsong as a parrot flew around the ceiling. Blue and green tiles lined the floors and the walls and the furnishings were fit for royalty. We were greeted with delicious mint tea and biscuits that we consumed while laughing hysterically (much to the owners confusion) at the day we had just had and the disbelief of where we ended up. We were shown to our 'room' which was big enough for 10 people and had a corridor to the bathroom (wow). As I threw myself onto the bed I felt like a (dirty) princess and I'm pretty sure Ebbs did too. After a hot shower we both climbed into bed and began to plot ways in which we could stay here forever.

The next morning we emerged from our double doors to a beautiful breakfast in the courtyard fitted with sweet potato butter (if you haven't had this TRY IT NOW) and multiple pots of tea. We didn't get much exploring done in Fez as we found it more than satisfactory spending time in our room, exploring the riad and sitting on the roof. However we did venture into the Fez Medina which was a 5 minute walk from our riad and had a completely different vibe to that of Marrakesh. The people here didn't hassle you or try and trick you into buying things. Unlike Marrakesh which is surrounded by desert Fes is surrounded by green hills and pastures giving it a competently different atmosphere. I would probably recommend 3 nights and 2 full days here if you want to get the most out of the city. Ebbs made friends with a 40 year old souk stall owner and spent a few hours with him drinking tea and playing music while I wandered around the markets. Many people suggest you hire a guide to take you around the media as it is very complicated and confusing however I believe guides are rarely necessary in any circumstance and it is usually far better to explore somewhere on your own even if you do get a little lost (which we didn't thank god). There were far less tourists here than in Marrakesh and because of that there were lesser food options as well.

We booked our riad through airbnb for $52 a night ($26 each)!! It was called Riad Biasas and I think it can also be booked through booking.com. (below I have included a million and 1 photos of the riad none of which actually capture how amazing it was!!) 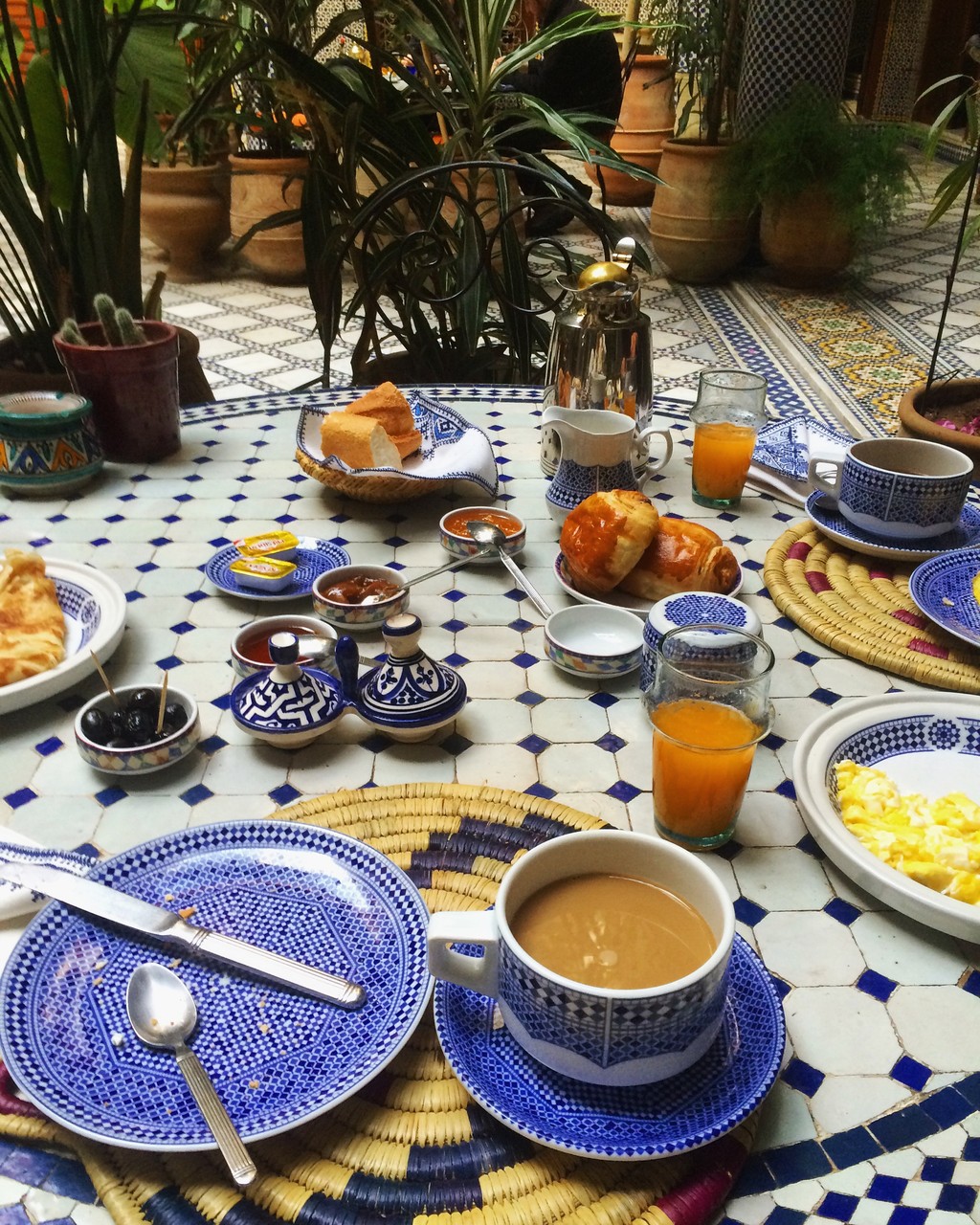 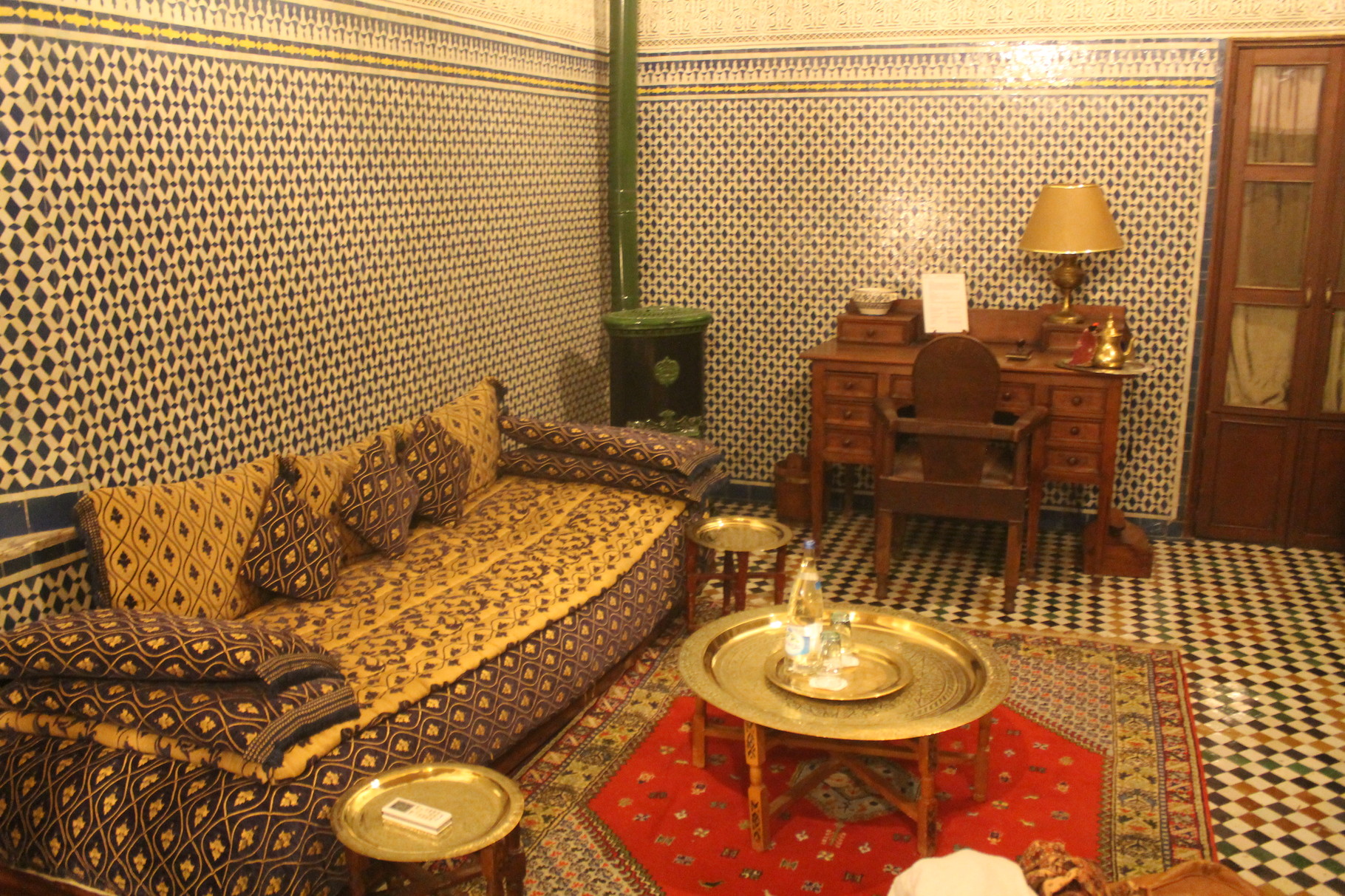 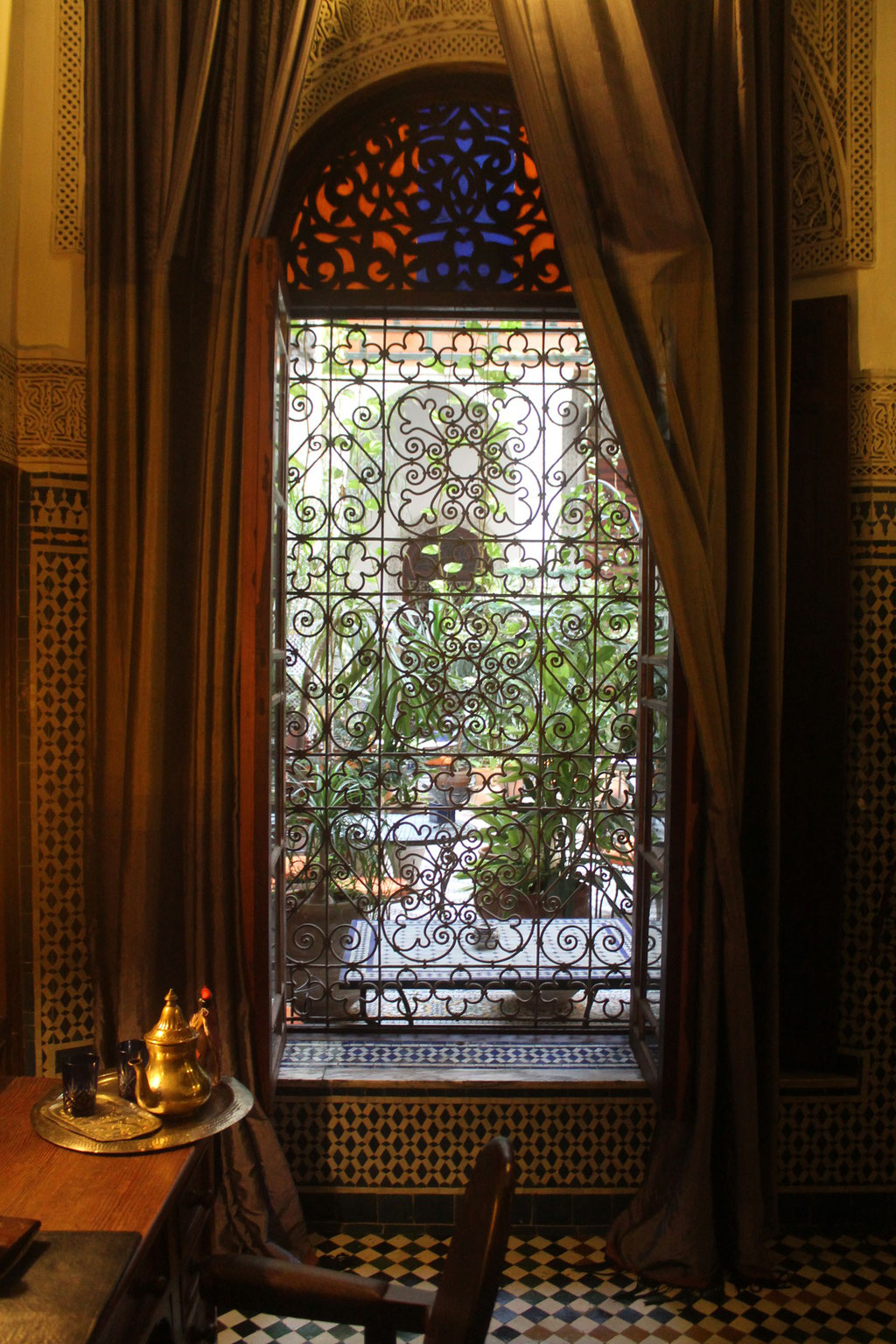 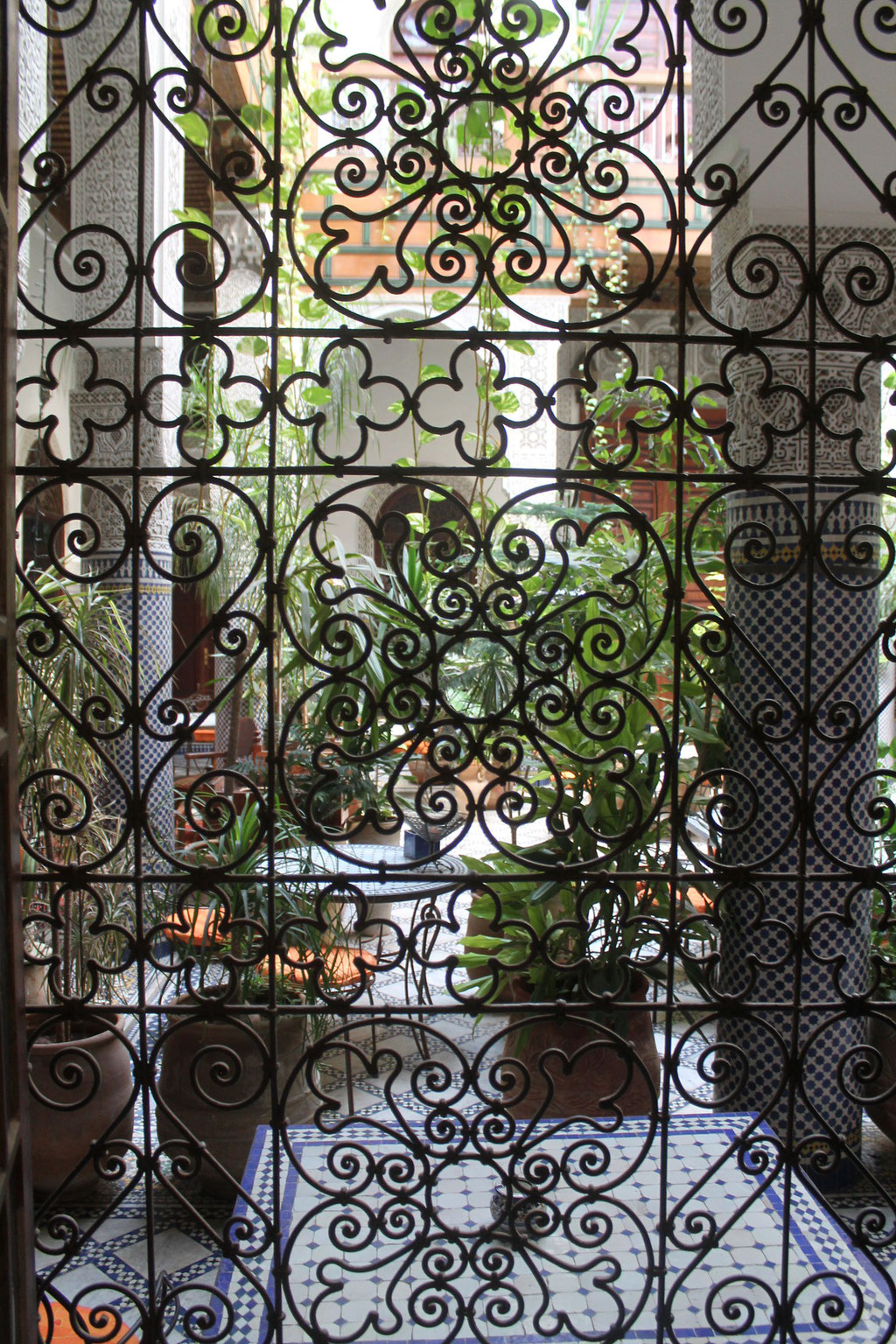 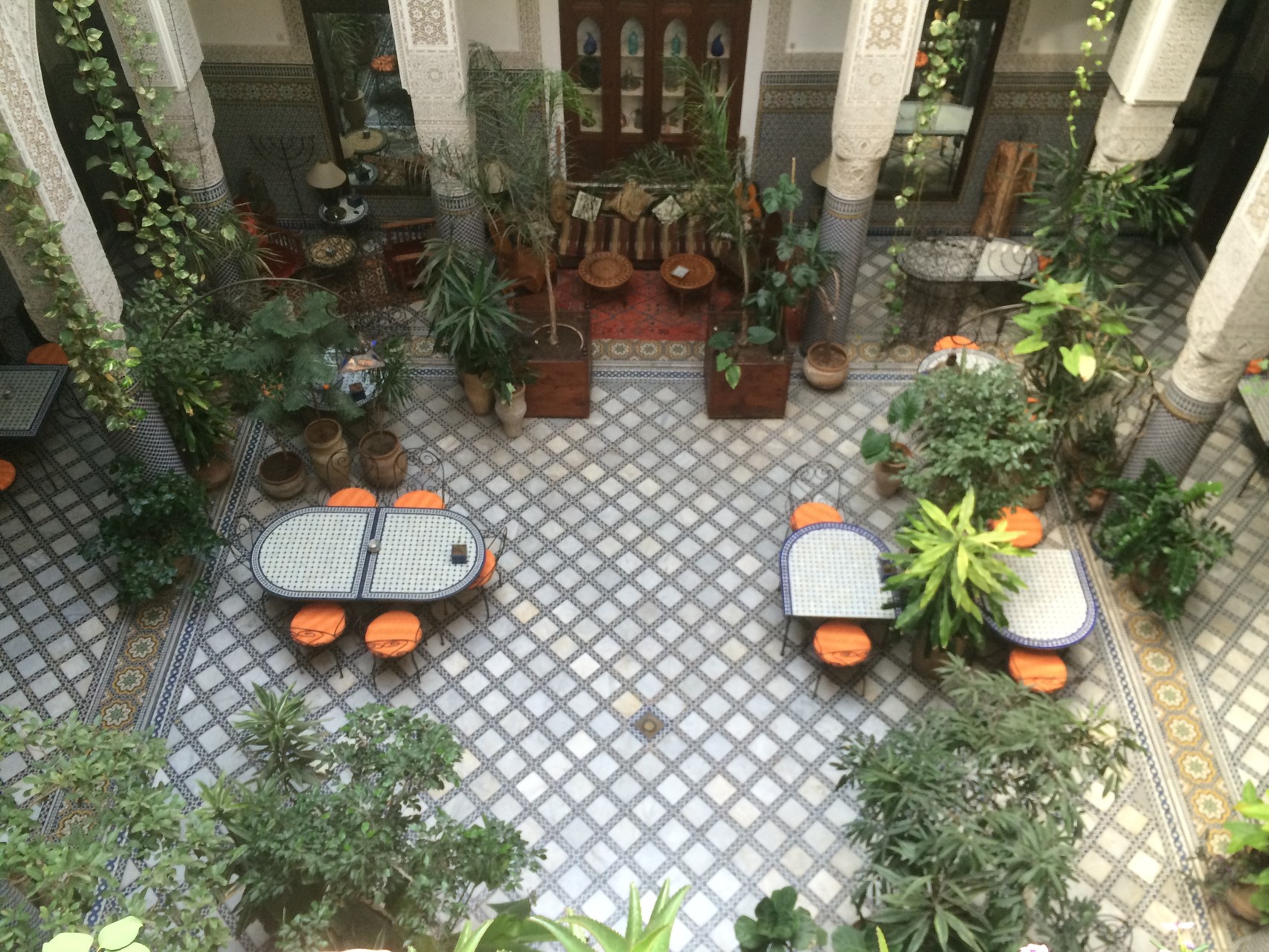 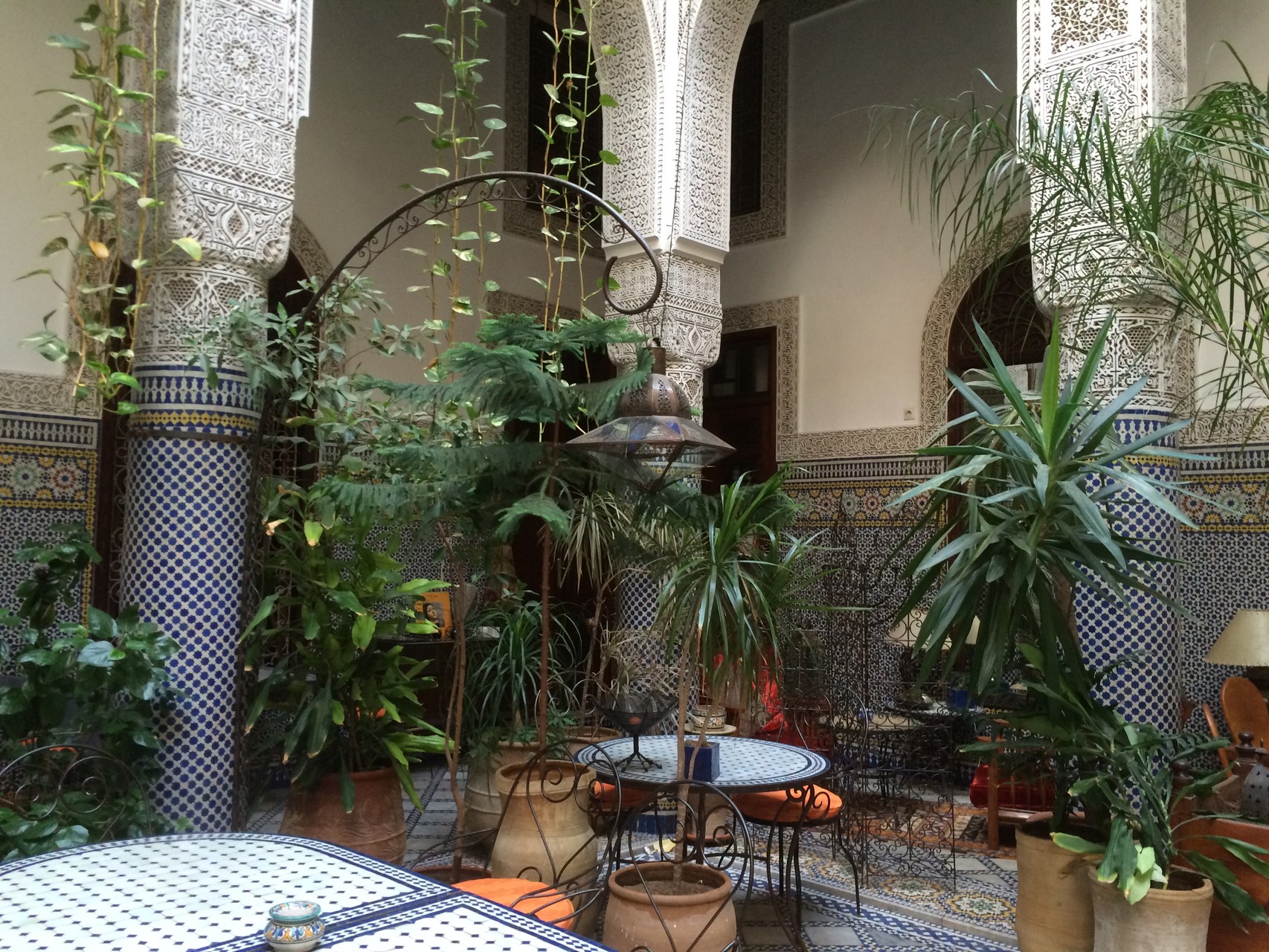 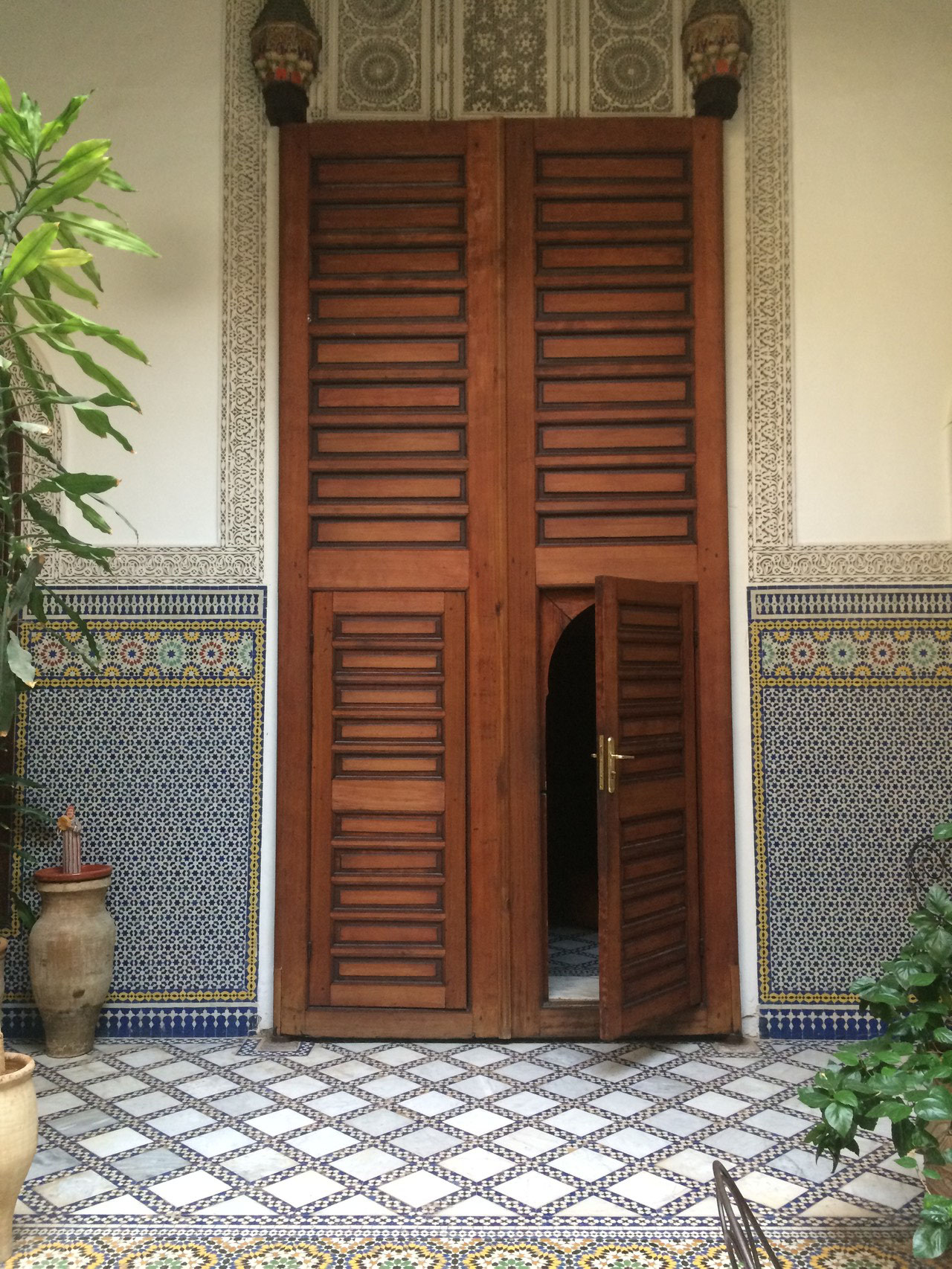 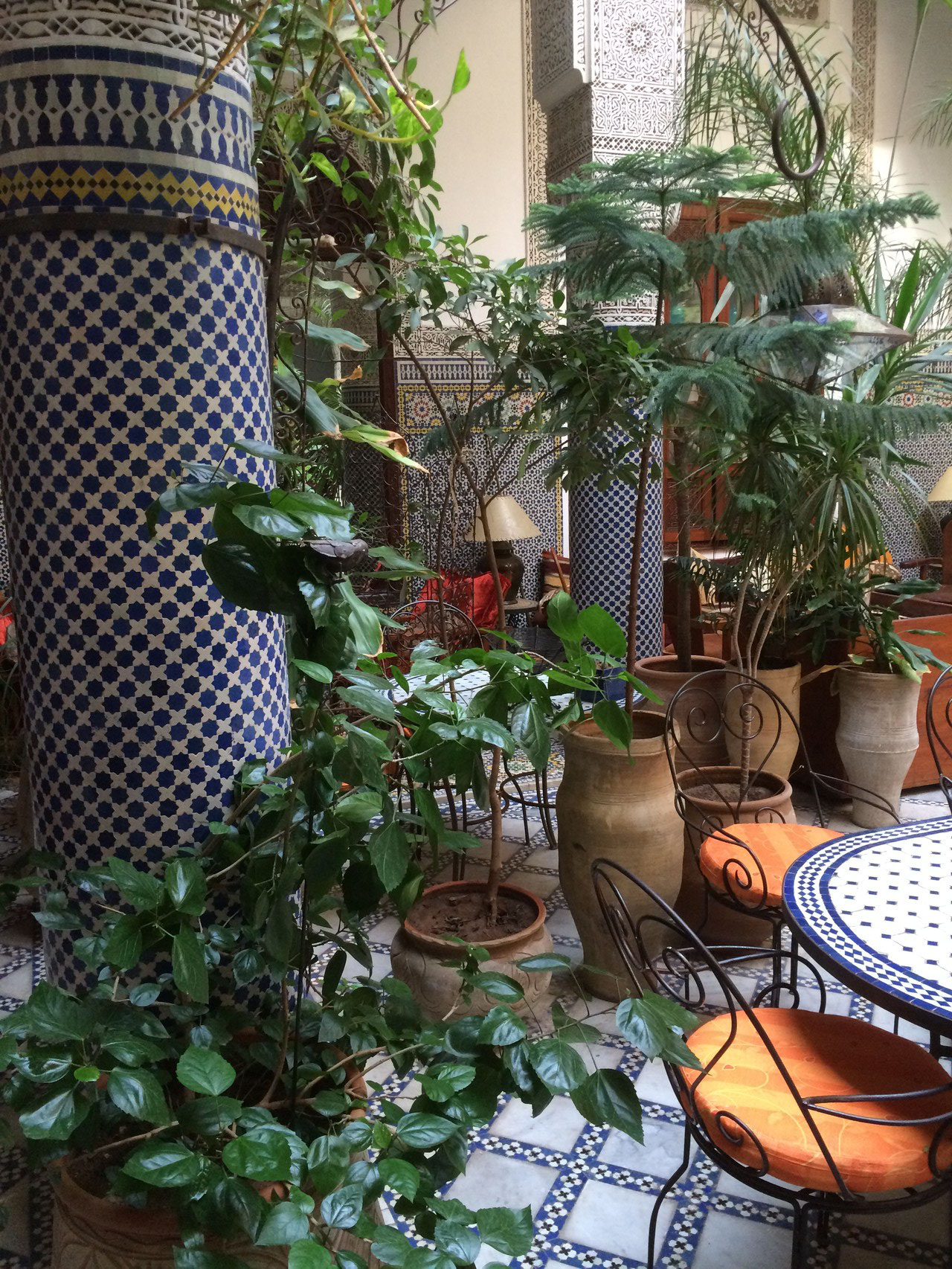 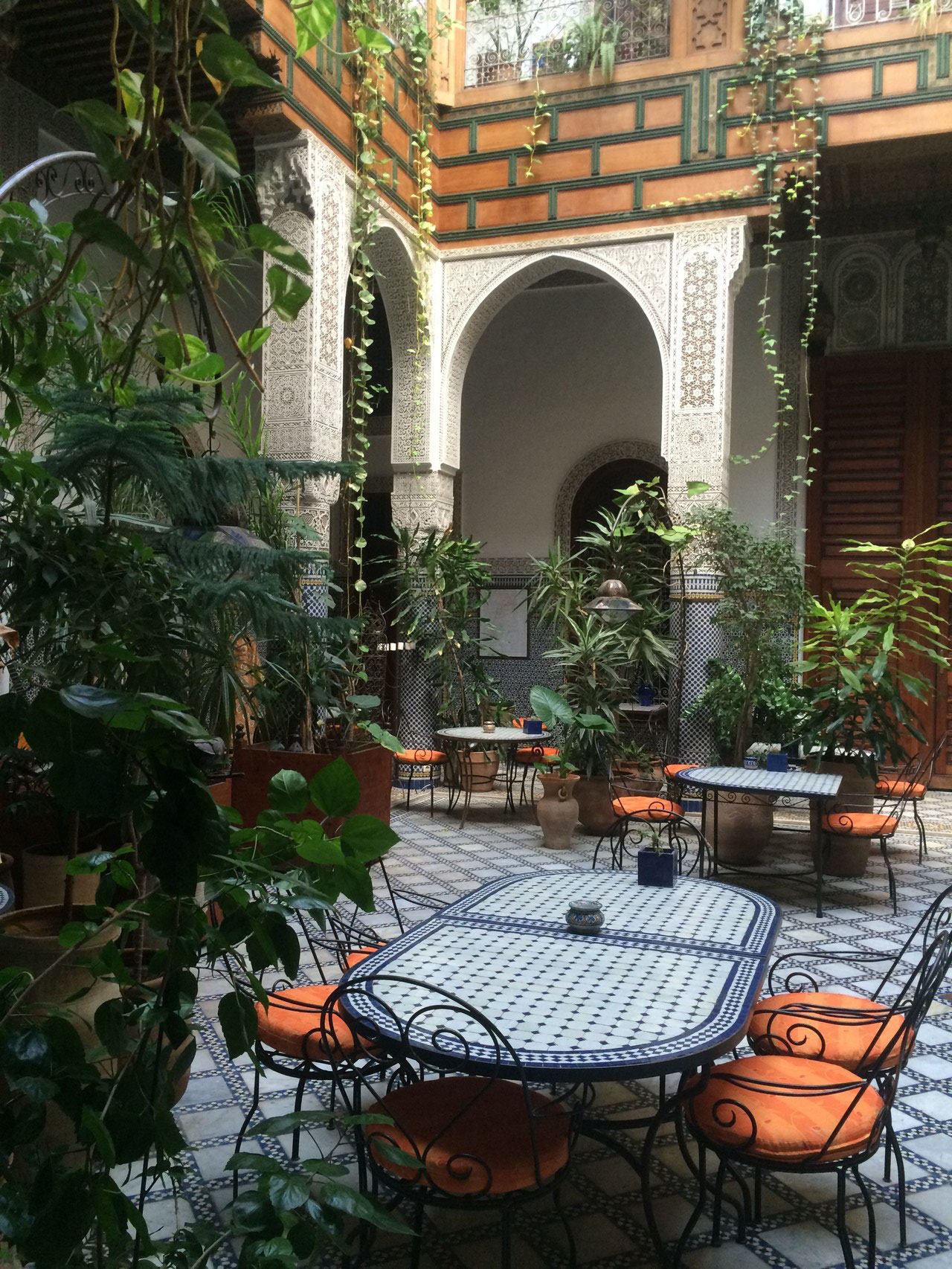 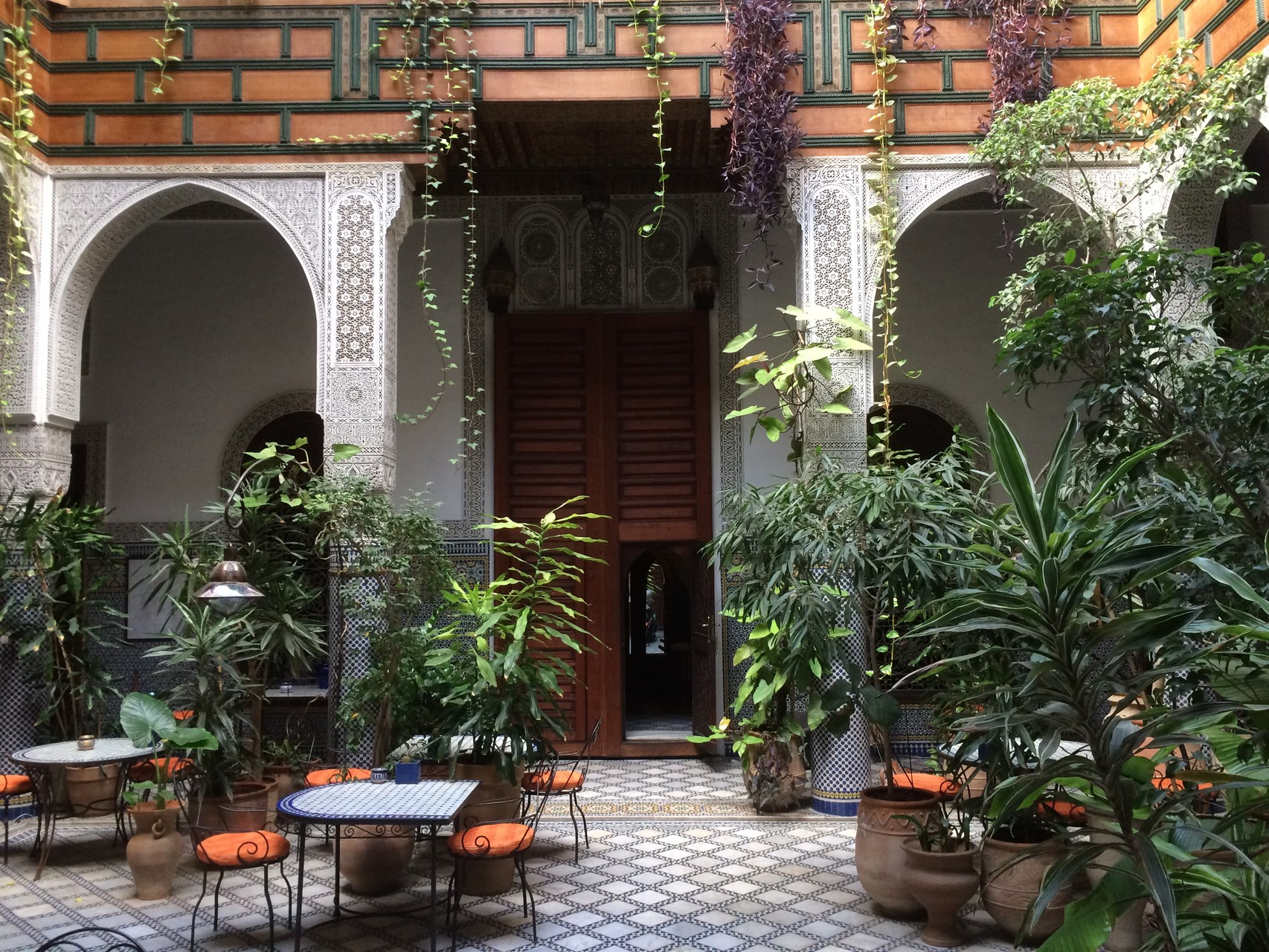 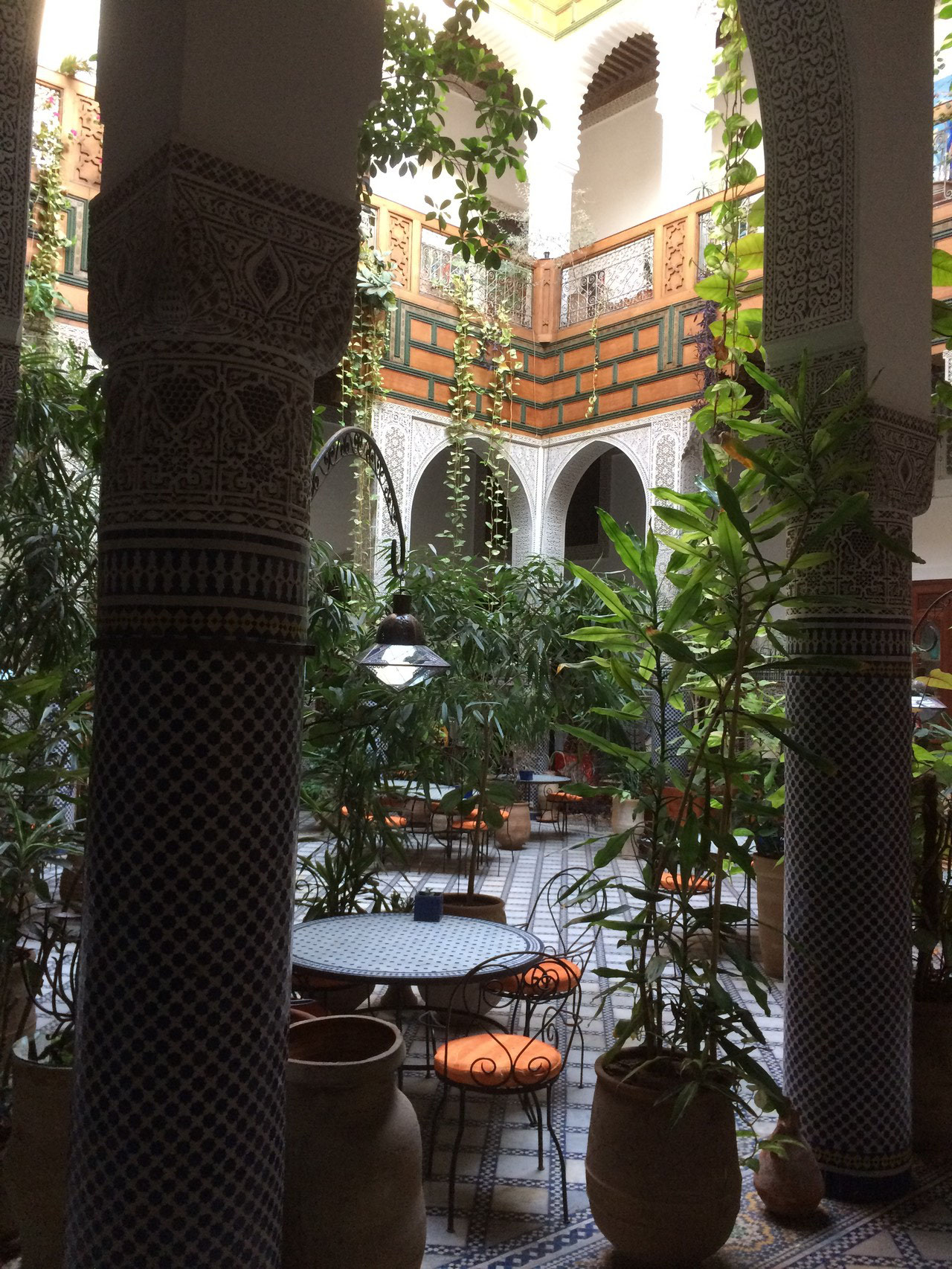 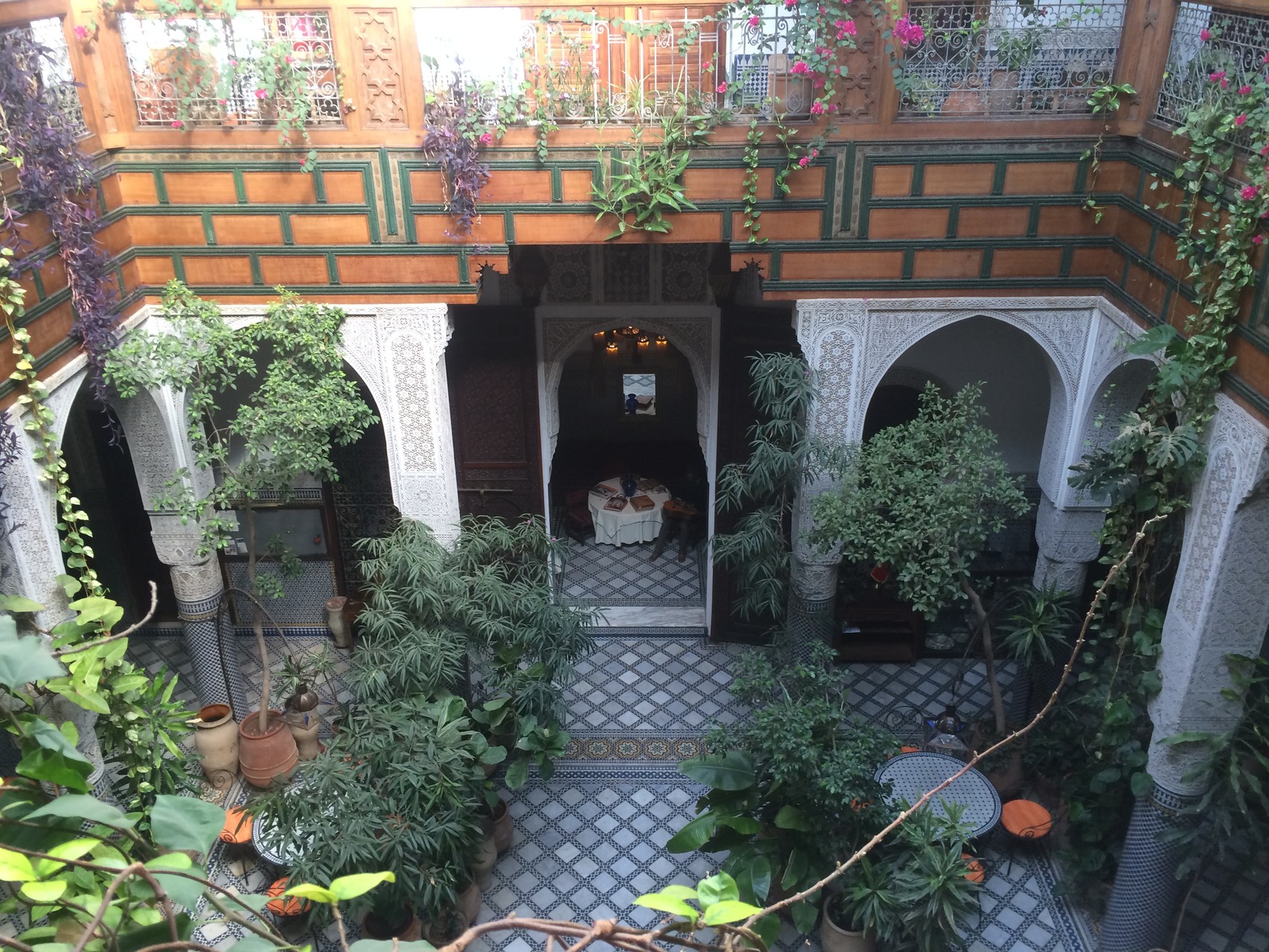 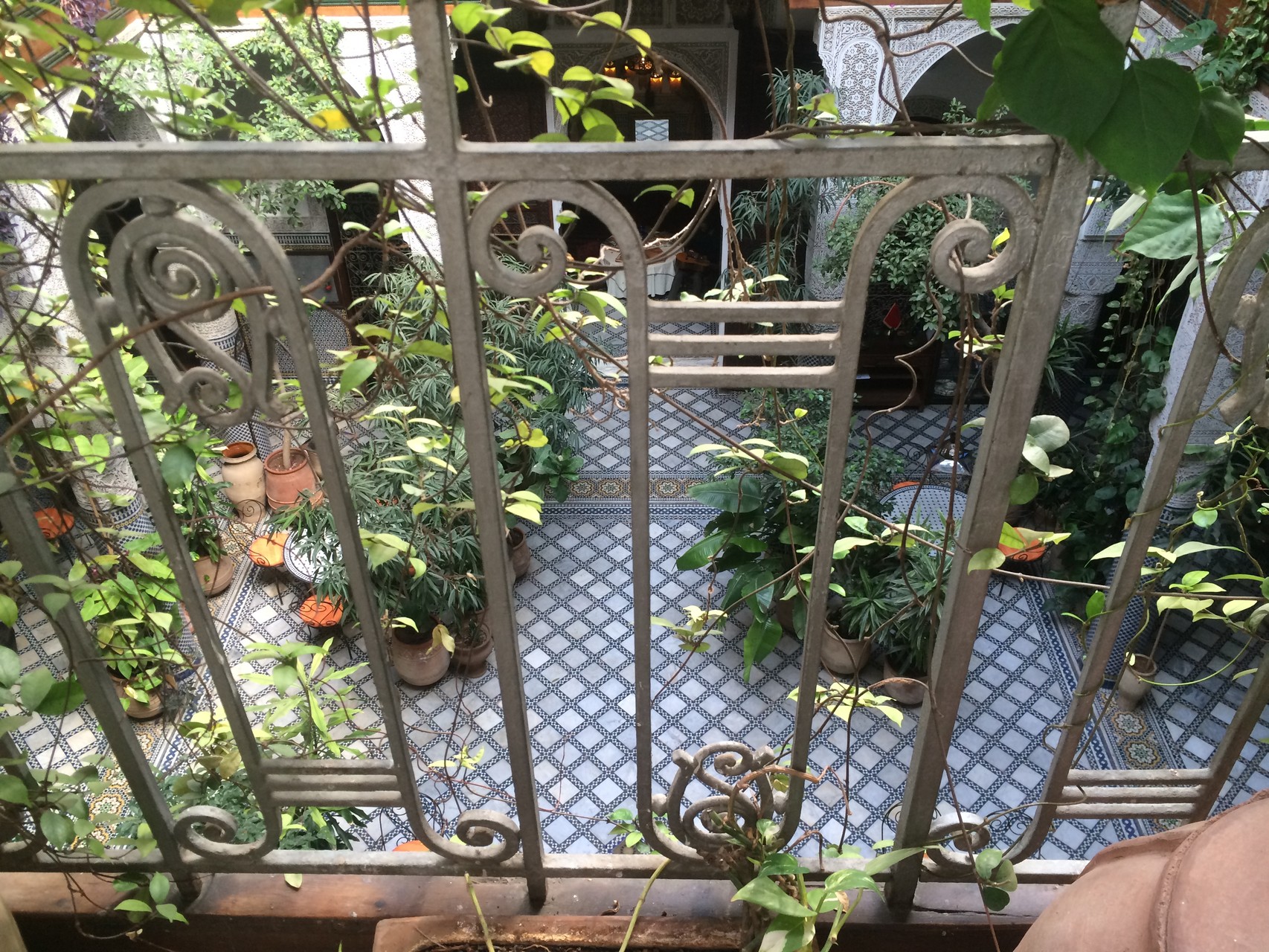 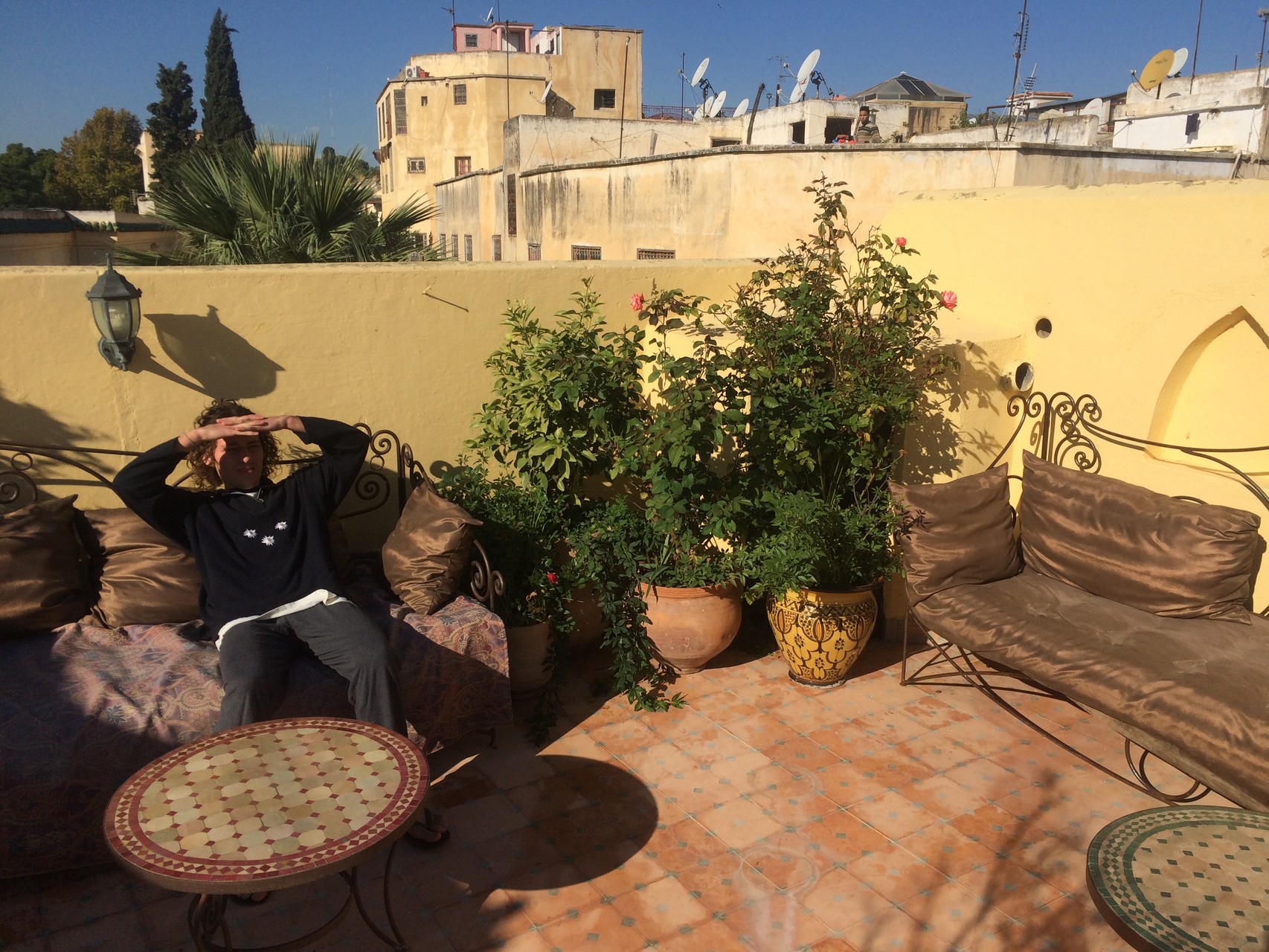 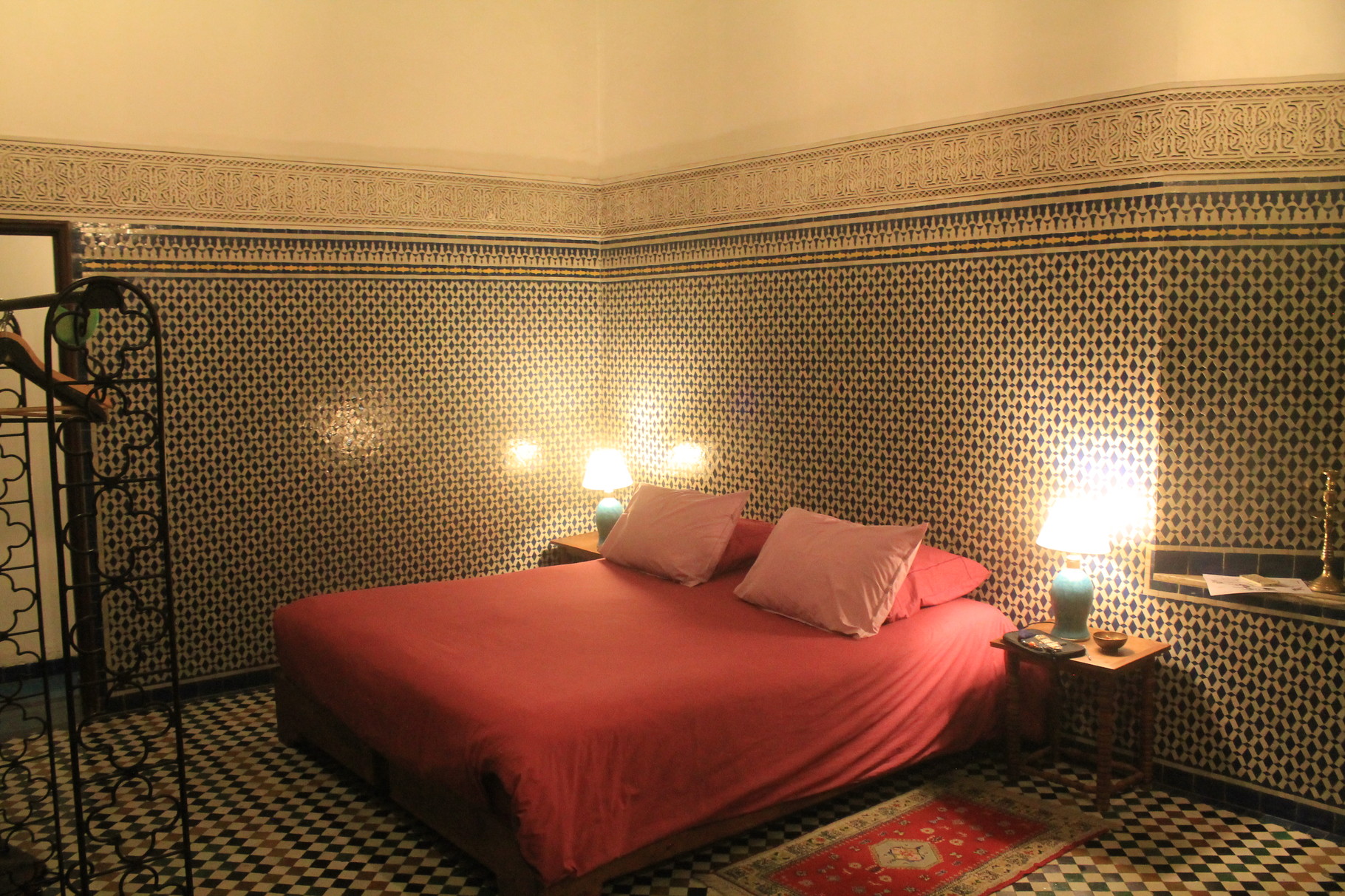 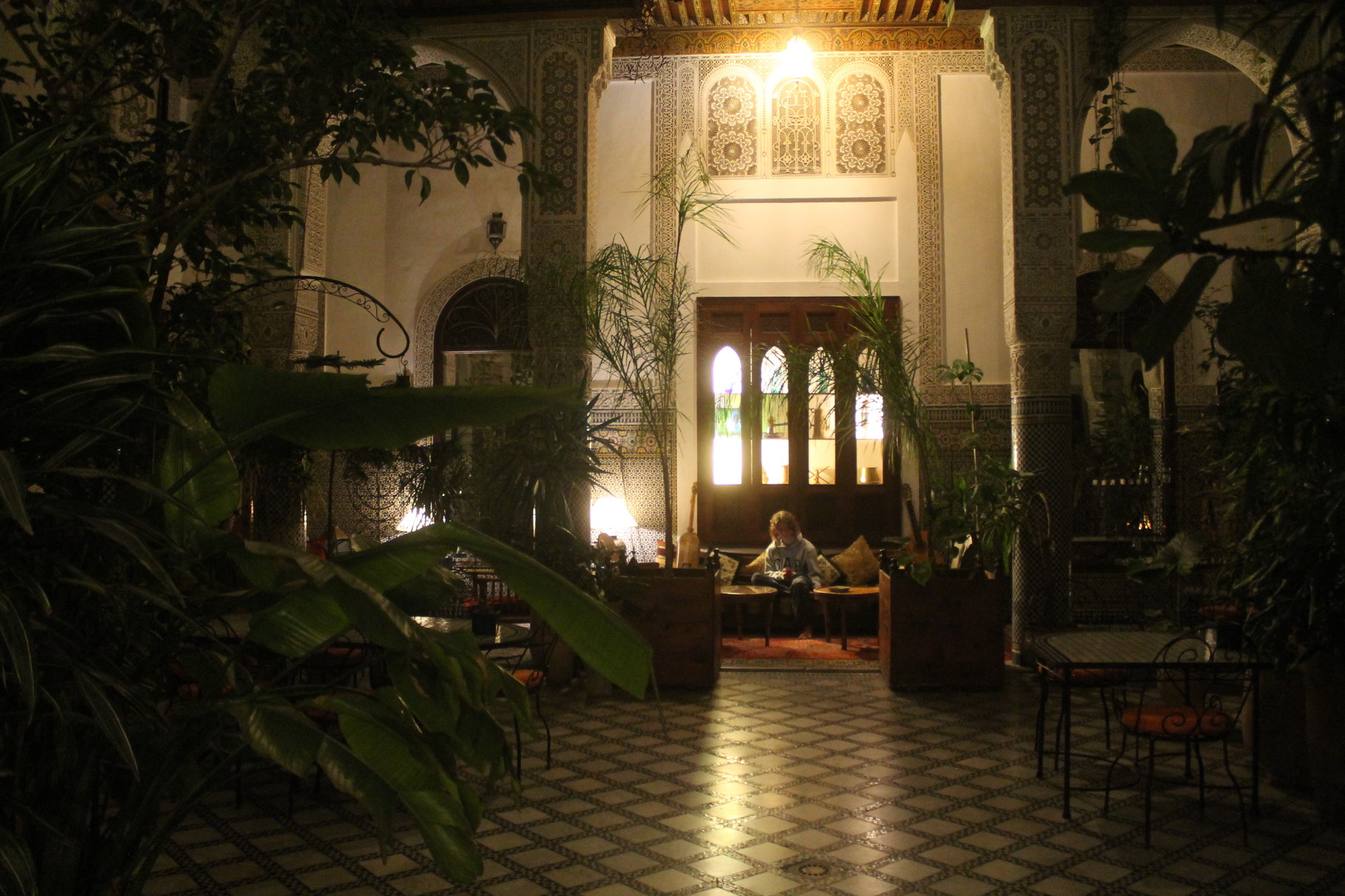 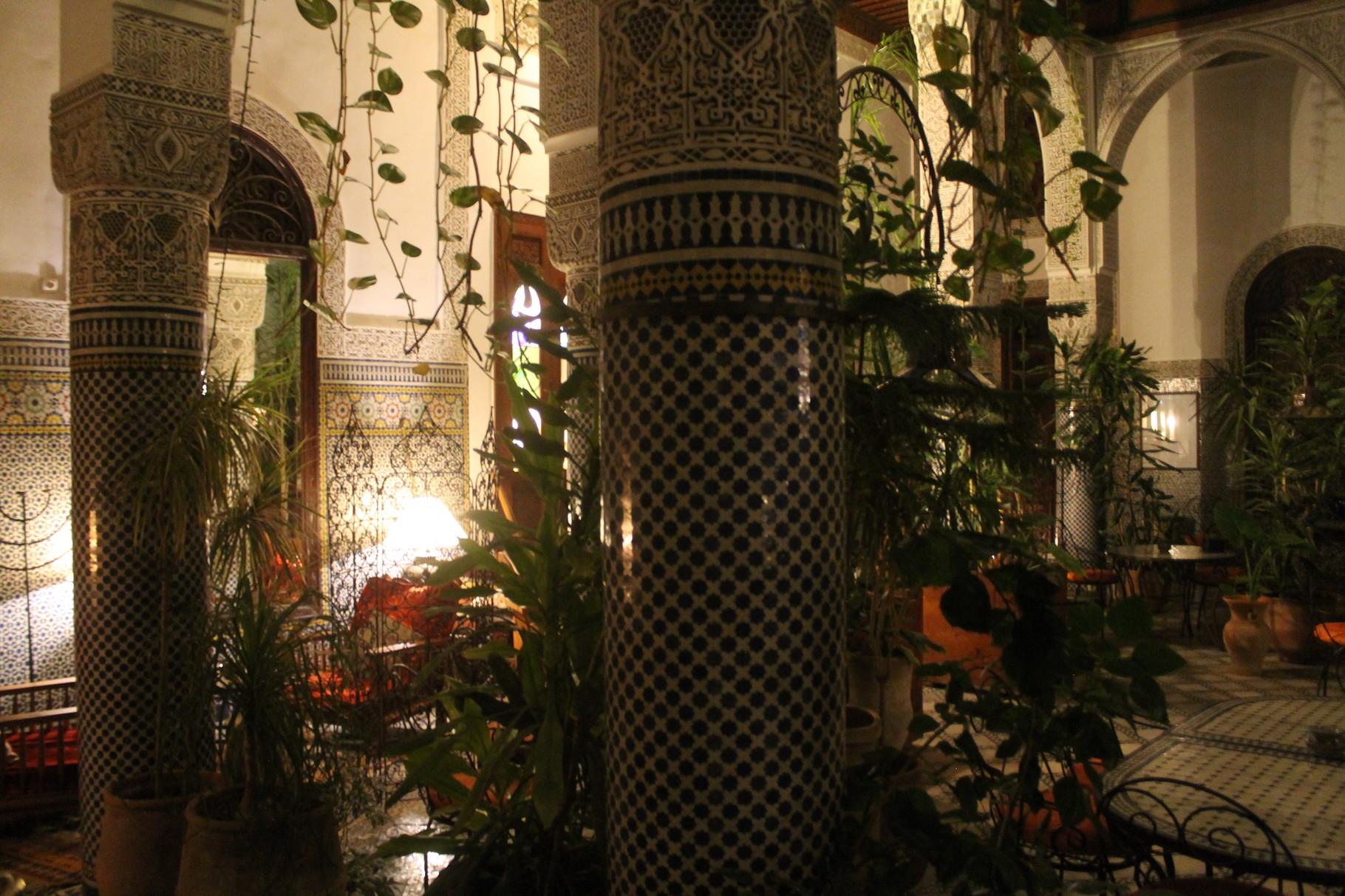 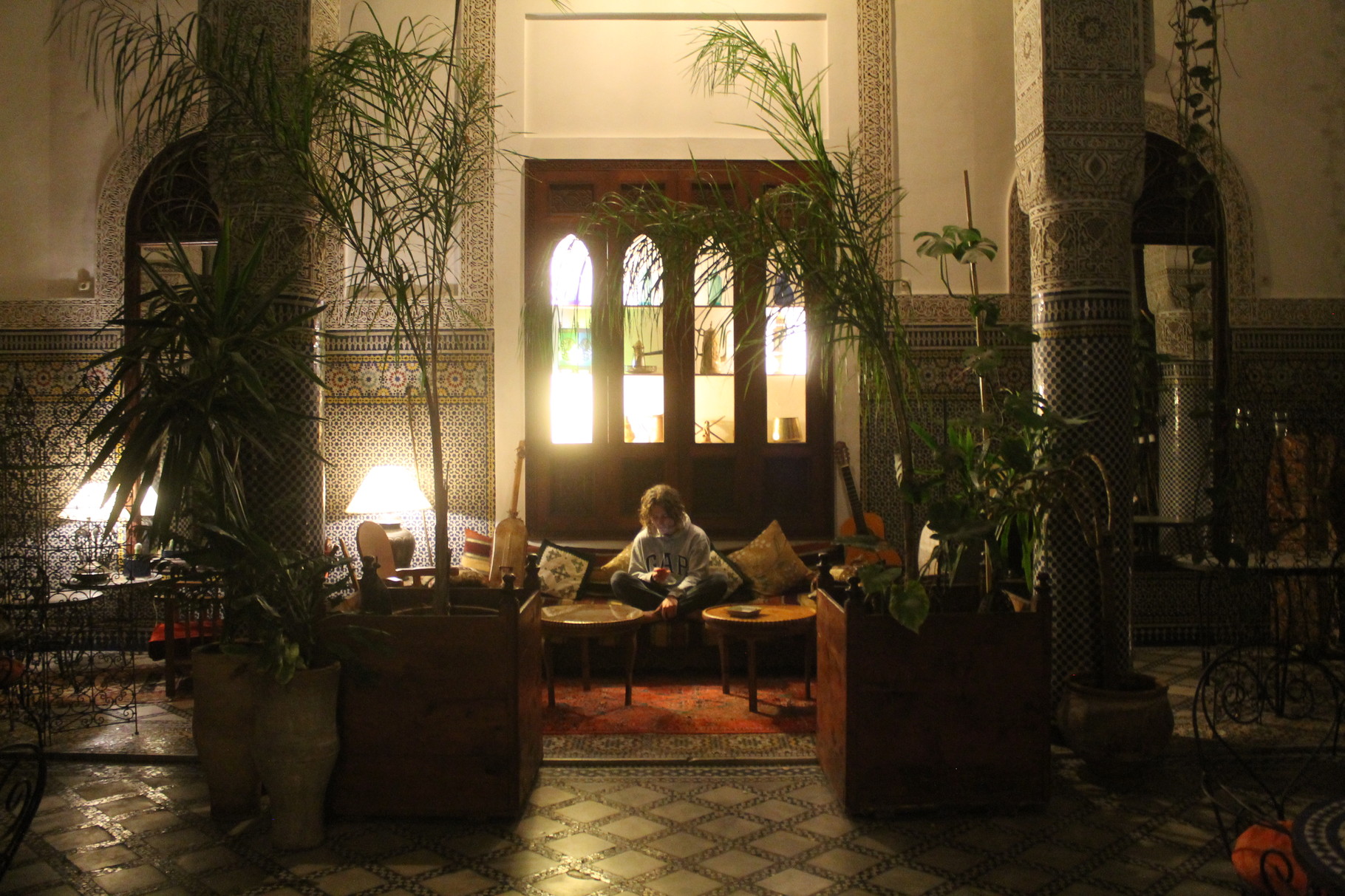 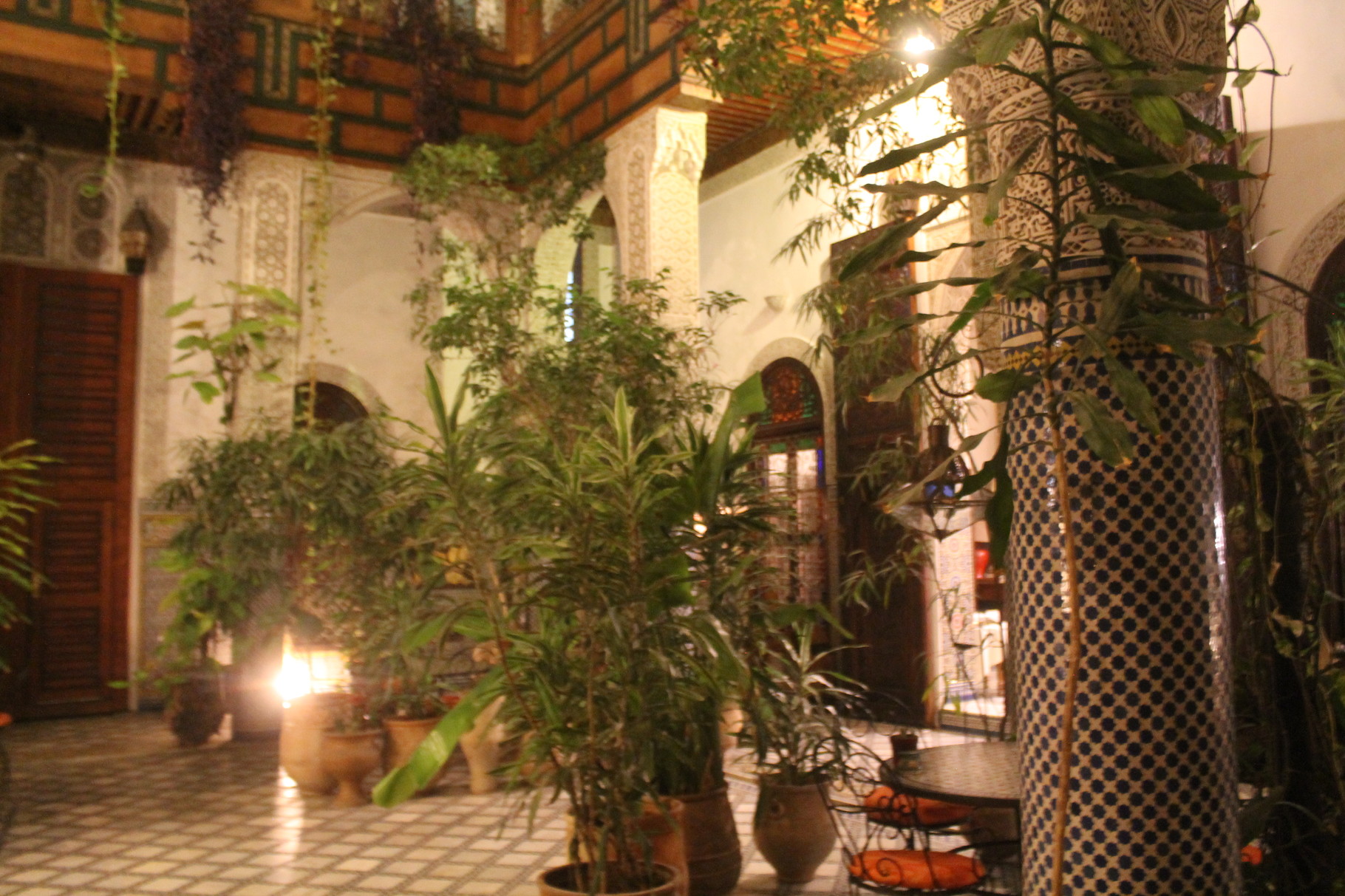 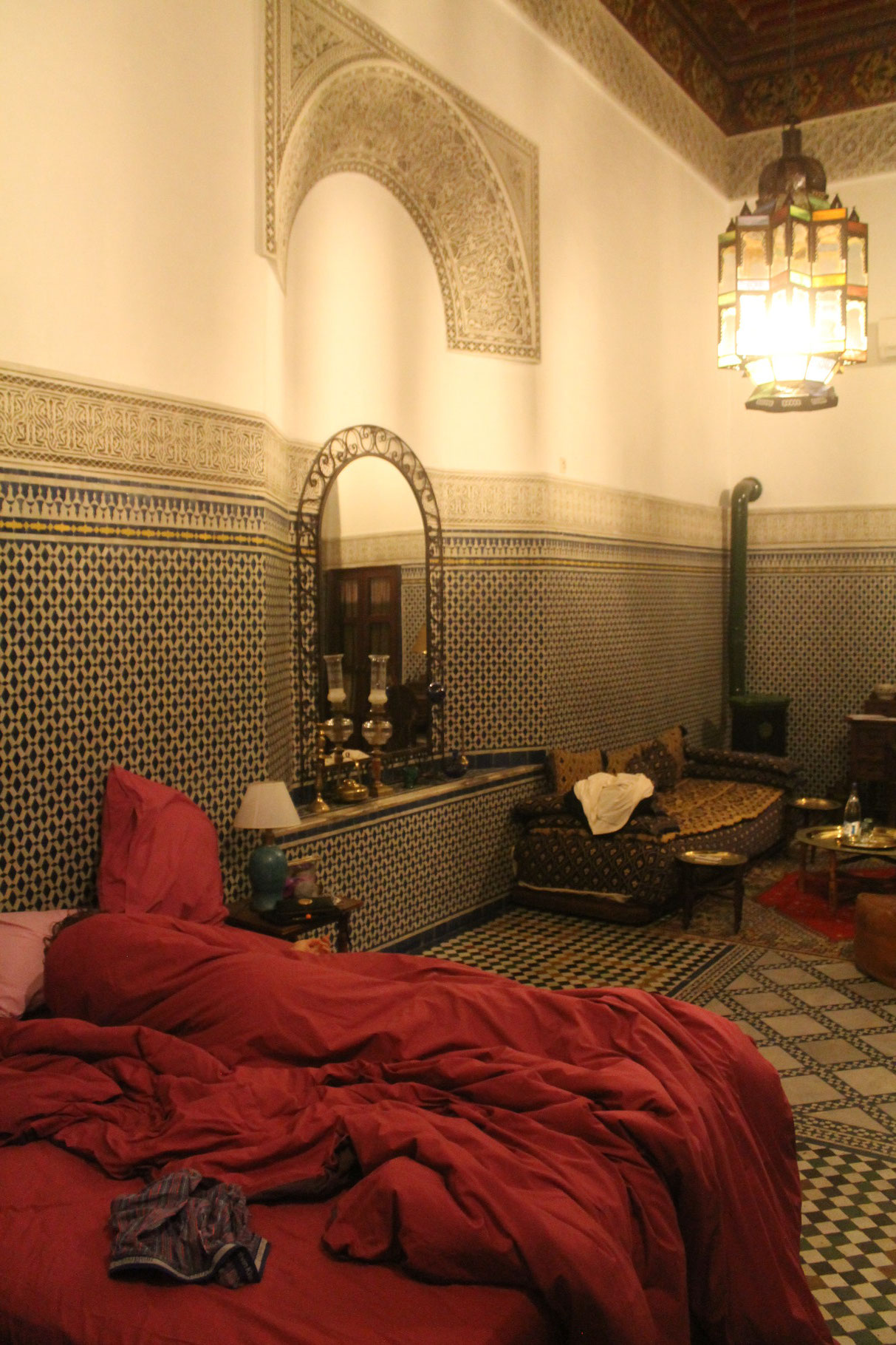 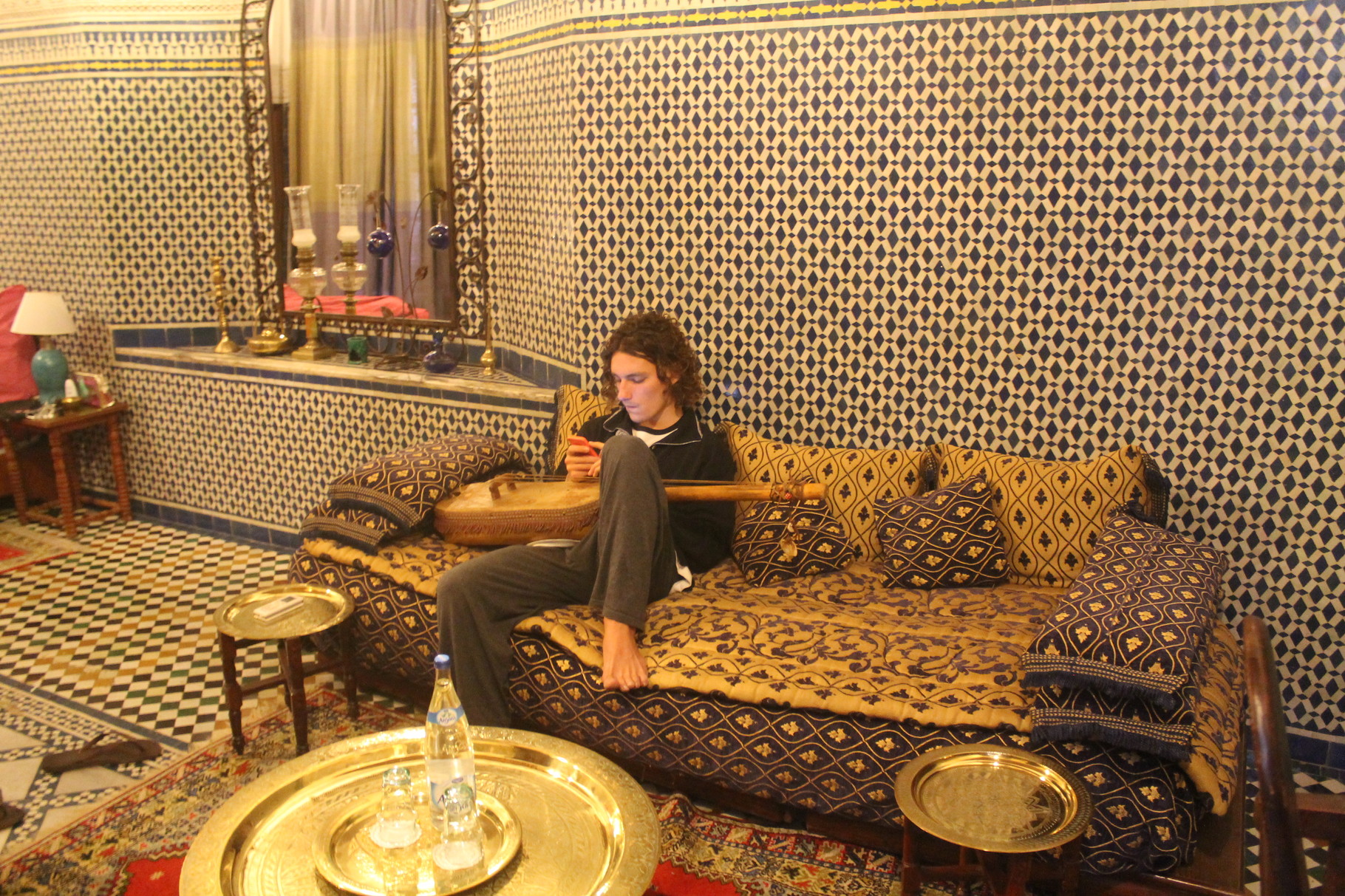 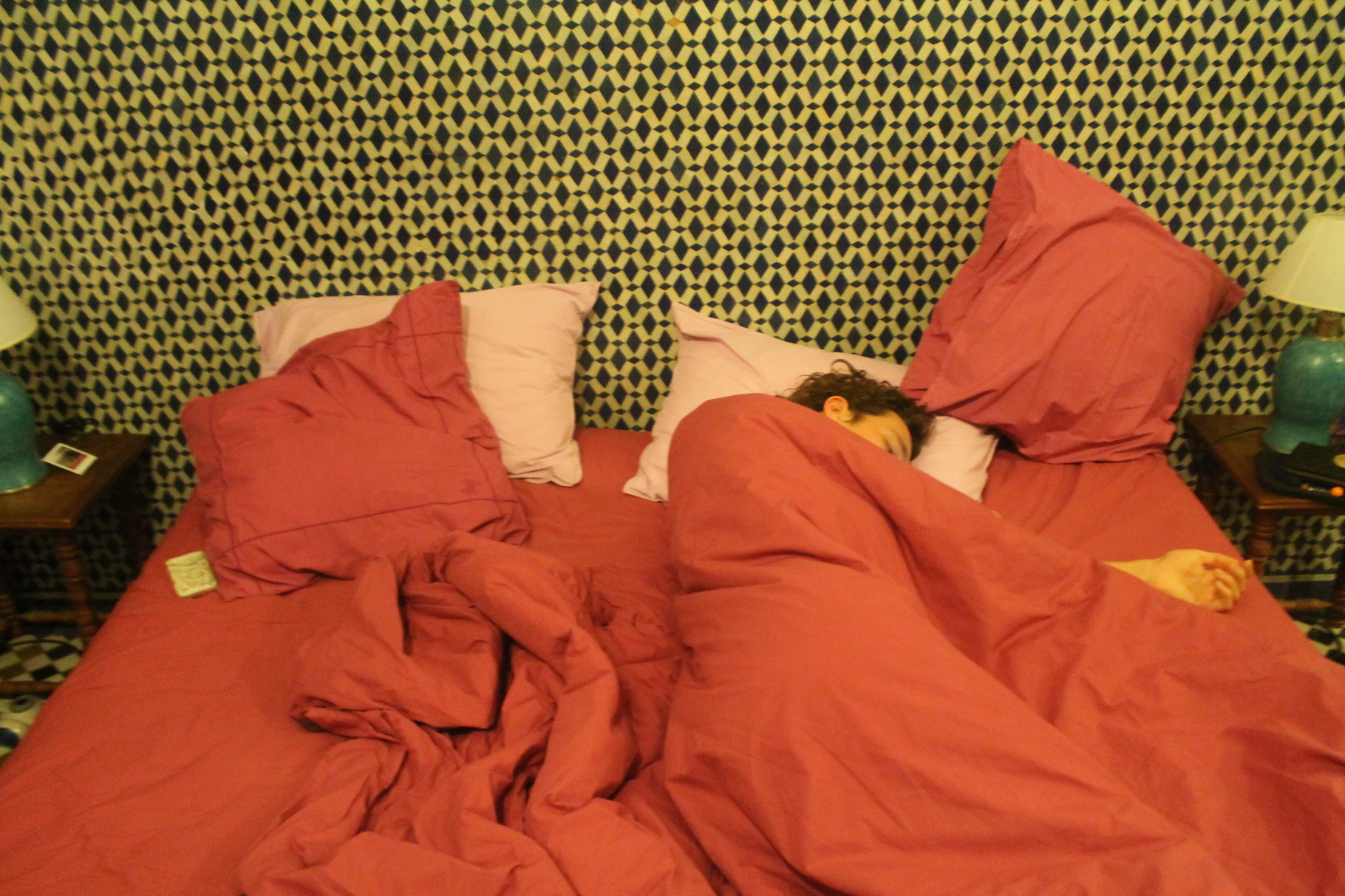 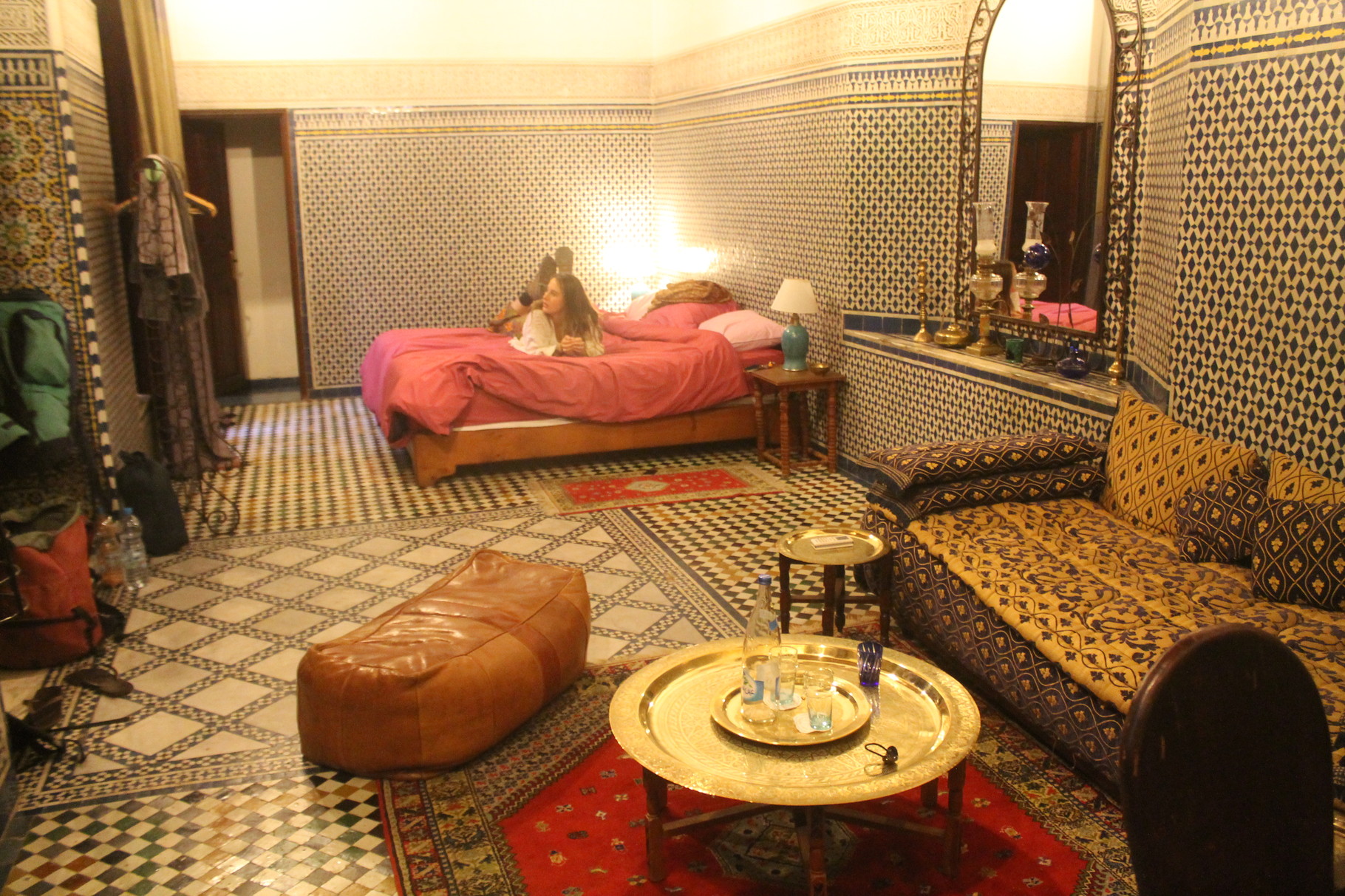 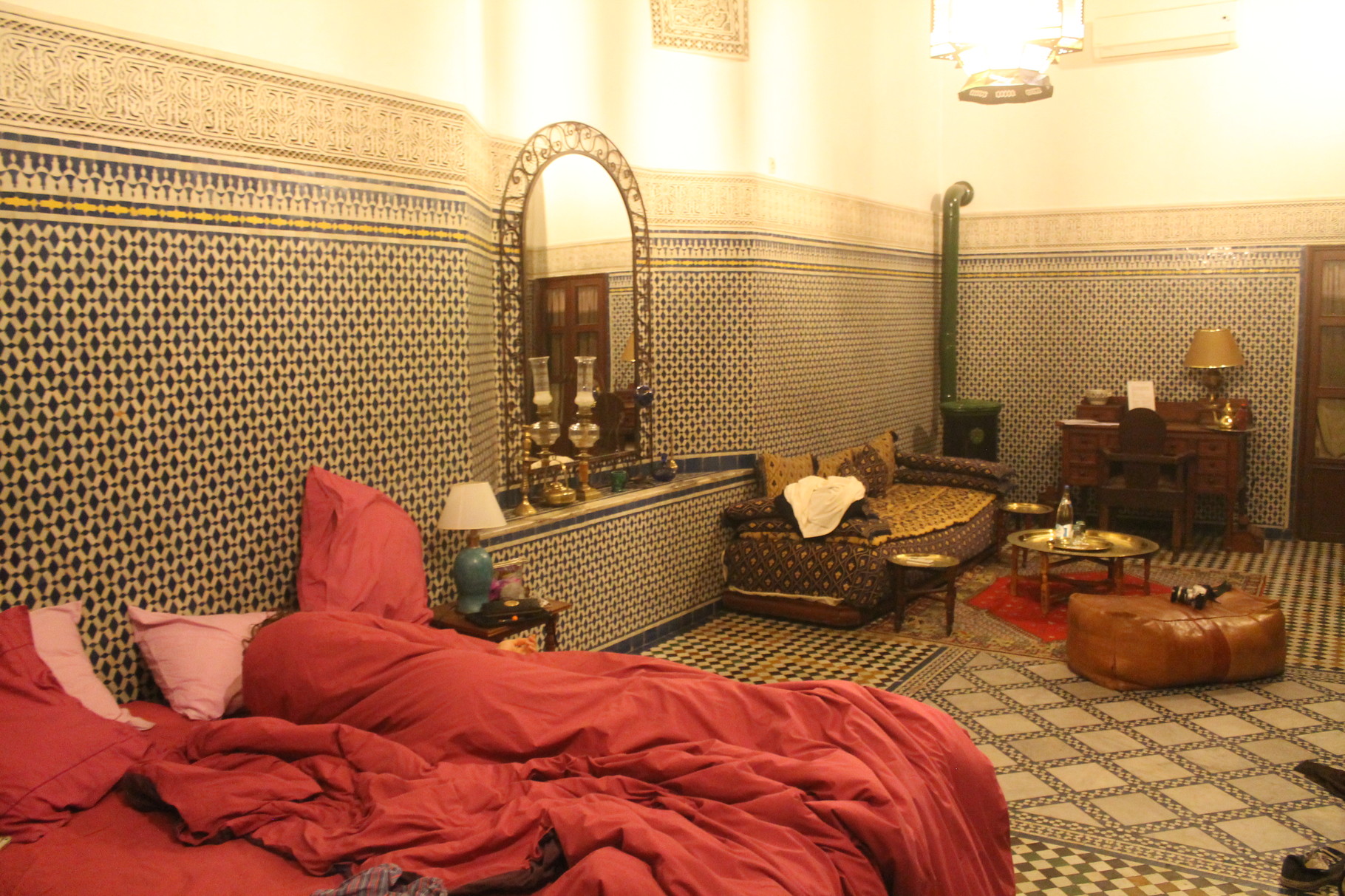 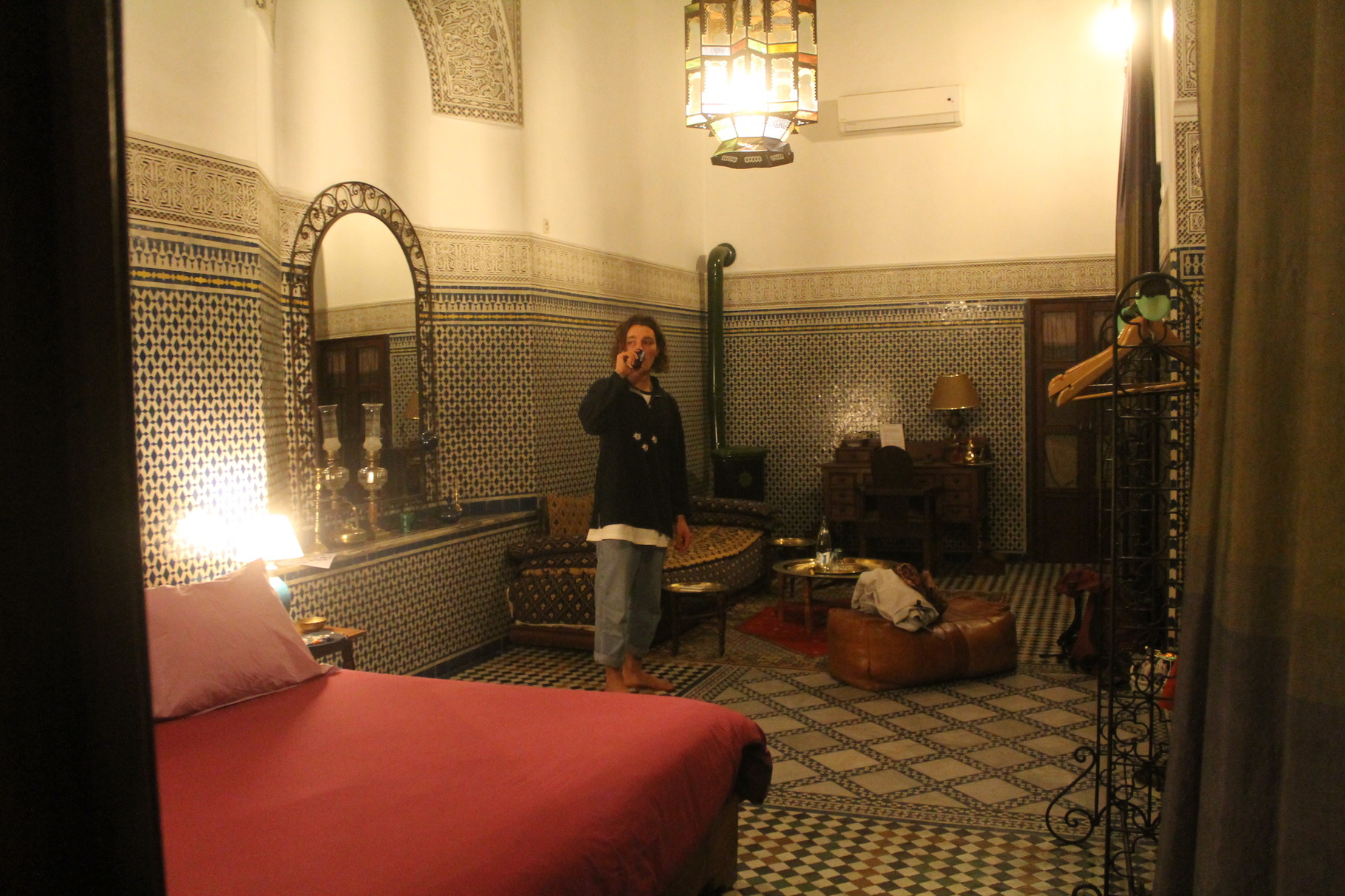 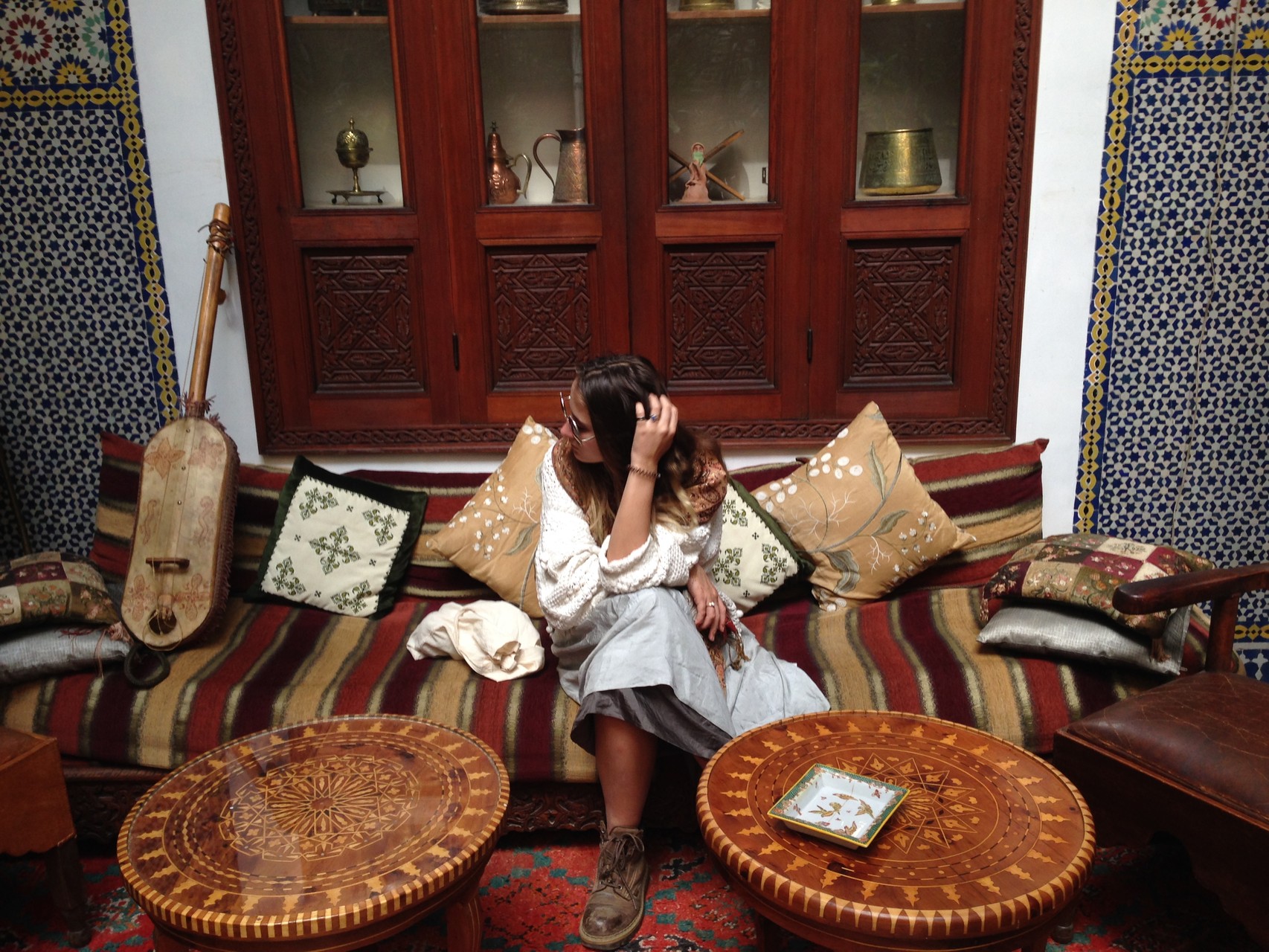 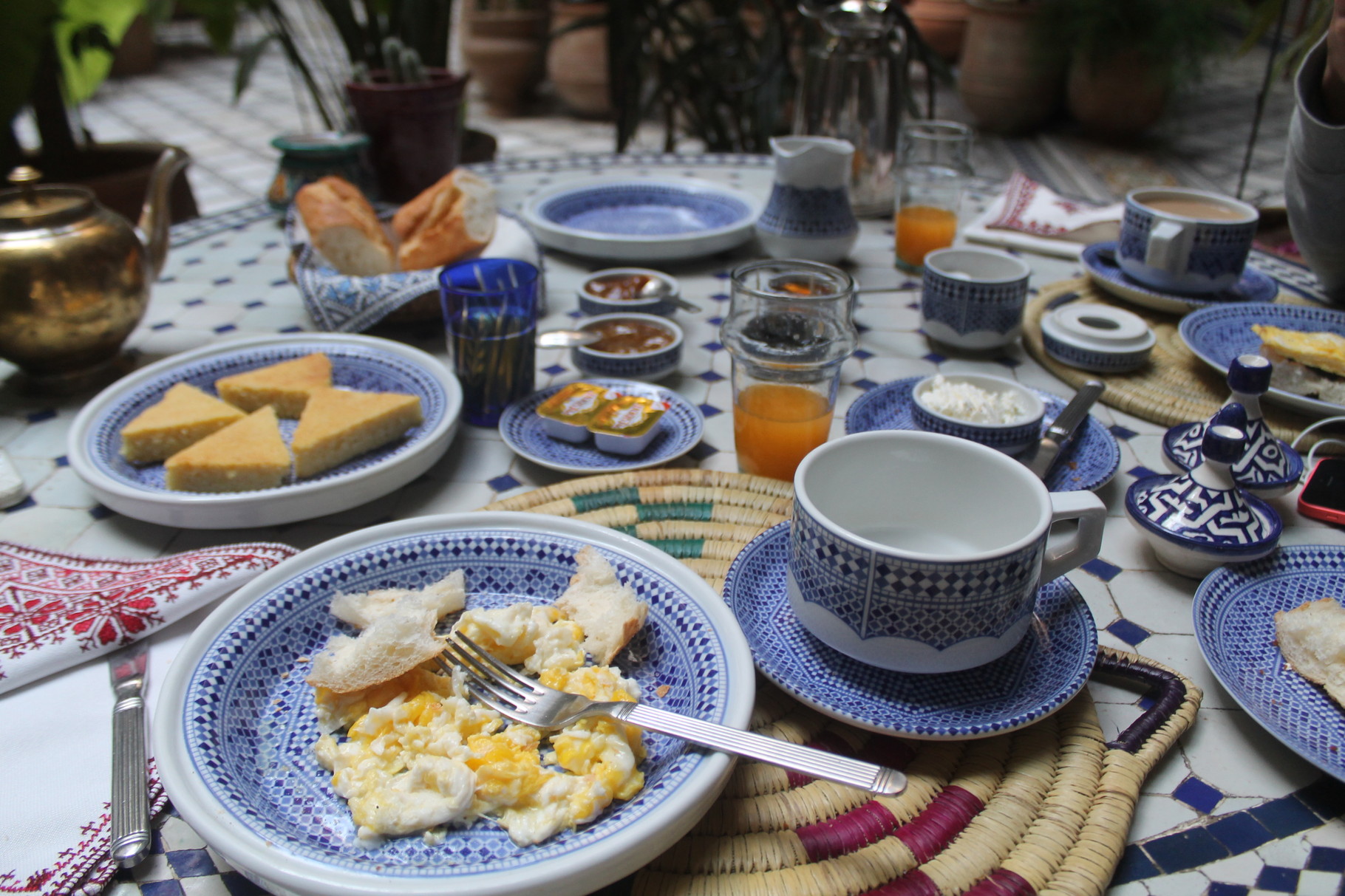