Despite having crossed into its borders several times over the past few years, Montenegro remained a country I was yet to explore so when an opportunity to arose to spend a week there with my super groovy pal Aislinn I couldn't say no!!! We stayed in Kotor, a small town about 40 minutes from the coast, surrounded by huge mountains and on the edge of a salt water lake.   Initially, when planning our time here we intended to stay 2 nights in Kotor and 2 nights in Budva however after a little map analysis I realized that the two locations were only a 40 minute bus ride from each other and it would make a LOT more sense to just stay in one hostel. Montenegro is not a big country and most distances can be covered fairly quickly, although the roads are pretty windy as its super mountainous. We had strange weather, with rain some mornings and hot sun the rest of the day. We were told it was pretty abnormal, given that we were there in June, but we found the afternoon showers pretty relaxing and still managed to get burnt in the hot midday sun. They use euros in Montenegro which made things easy, and most people speak at least some broken English. 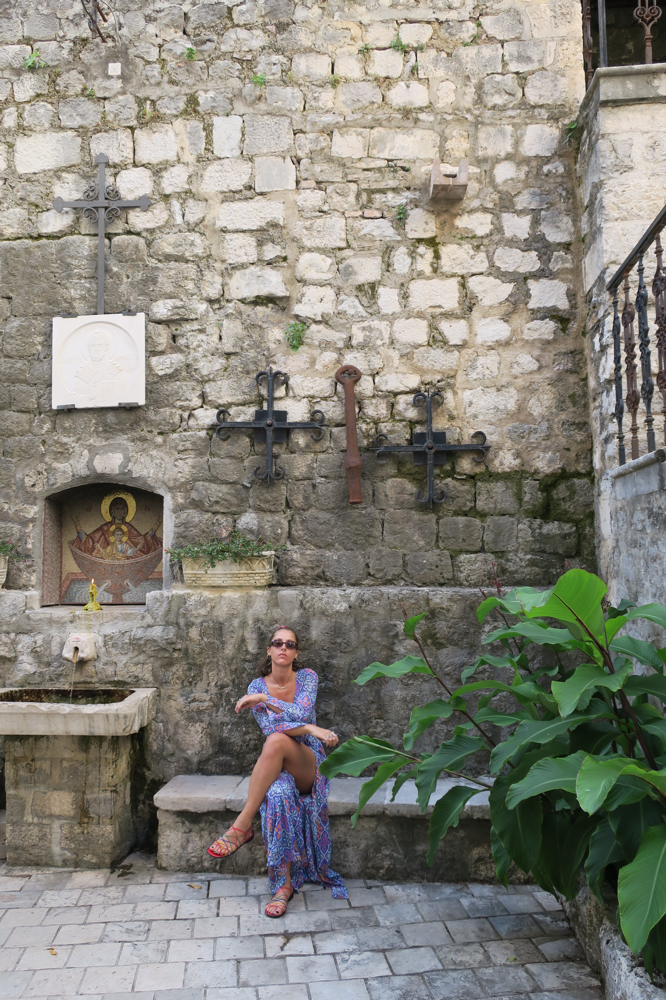 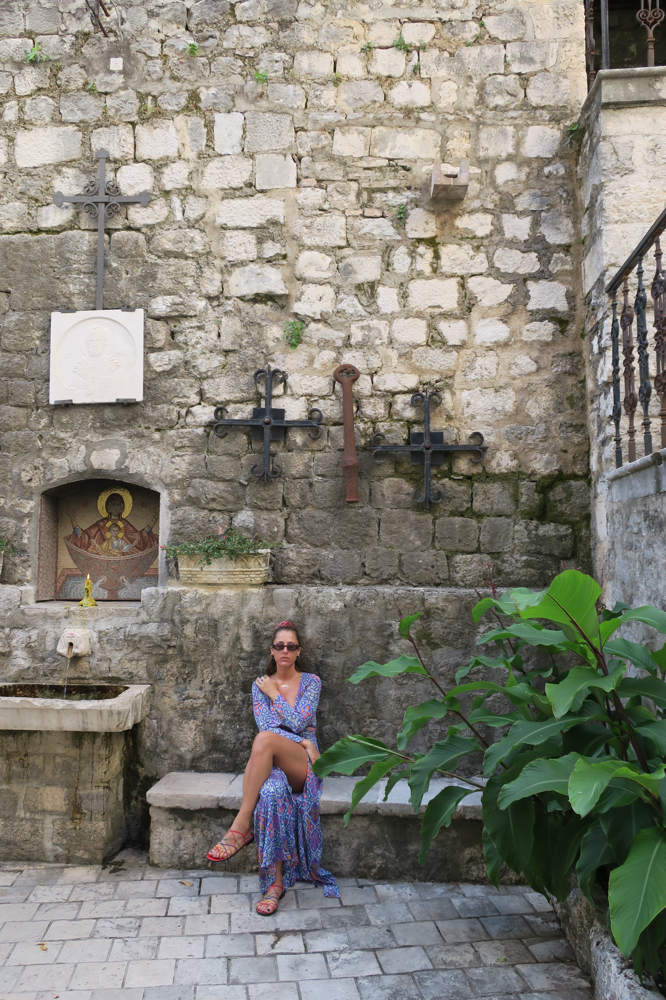 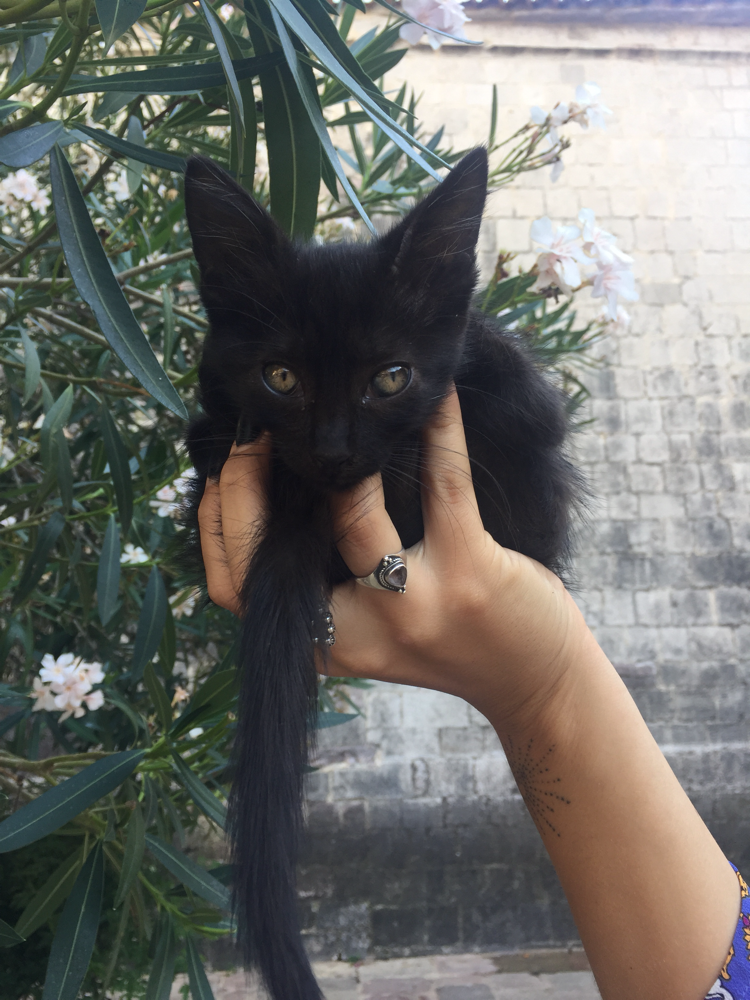 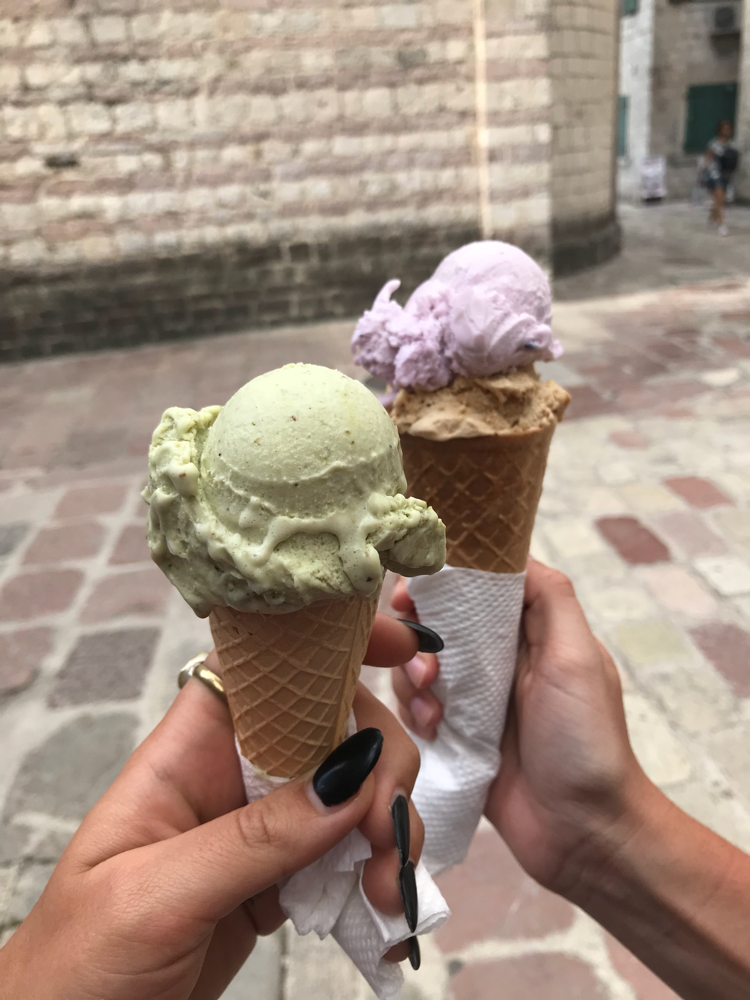 What to do in Kotor

After spending my first week away in London I arrived in Montenegro pretty exhausted and stressed. Ebbs and I had tried to do too much during our time in London and both of us had really important uni assignments due so we spent most of our time writing and researching anyway. Montenegro was just what I needed! Our days were fairly repetitive (in the best possible way). I'd wake up and go for a run along the edge of the lake and then make porridge and sit on the windowsill of our hostel and watch the old town and the mountains as I ate. Our mornings consisted of a trip to the local fruit market (just outside the old city walls) where we'd buy 1 euro raspberries and peaches and then go lie by the lake in the sun and listen to podcasts for a few hours. We'd make a delicious lunch with fresh vegetables from the markets and then go back to the lake in the afternoon. At about 6pm once the sun had gone down a little we would hike up to the fort to watch sunset. Usually it costs 8 euros to do this walk but we found a side entrance (to the left of the old town, you can see it on maps.me) that cost nothing and was actually a nicer walk as it was a long meandering path rather that steps. We brought up cheese and wine on our second night and sat on the flat roof of an old fort to watch sunset. Was pretty spectacular!! On our last night we decided to walk past the fort entrance and climb further up the mountain. The walk was easy but took about 2 hours and the view from the top of the mountain was fucking amazing, you could see ocean and mountains and the lake in all directions, I thoroughly recommend !!!

There are lots of day trips and boat trips offered around town but we decided to save our money and just take in the beauty of Kotor (its all pretty similar anyway ahah). For the best ice cream in town head to the far back left corner of the old town, there's a place there that does 1 euro scoops (as does everywhere) but they are generous in their scoop sizes and the flavors are legit… (you can trust us on this we sampled a lot of gelato)

To get to Kotor we both flew from Berlin to Podgorica which is the capital city of Montenegro. I actually flew from London to Berlin, then slept in the airport and then flew from Berlin to Montenegro the next morning to save money as the direct flight from London was way more expensive. My two flights including luggage cost me $120 with Ryanair. This airport is pretty fucking small and there are no buses that leave it, only taxis (something we discovered on arrival). We got really lucky and met this super nice guy who knew-a-guy that owned a taxi and offered to share with us so we could split the cost of the already pretty cheap ride. Instead of paying 6 euro each to get to the bus station and then another 7 euro each for the 2 hour bus ride to Kotor, we got a direct taxi that took about an hour and a half for 15 euros each. Tres magnifique!!! Flights can be a little irregular due to the size of Montenegro so it might be cheaper to fly into Croatia and then get the bus down. Dubrovnik has a pretty big (ish) airport with lots of international flights and is only a few hours from Kotor on the bus.

Hiring a car in Montenegro would be awesome because there is so much nature to explore and the bus can only take you so far. There are national parks, especially in the north of the country, that require a car to reach them and that I have been told are some of the most amazing mountain-scapes in the world (i'll believe it when I see it ahah). Its far easier to hire a car in this part of Europe than in most western European countries and its also a lot cheaper!

After Kotor we got a 5 hour bus to Makarska in Croatia, crossing 3 boarders on the way. The bus was 34 euro which is pretty expensive for a 5 hour bus but it was the only direct way to get there.

If you're staying in Kotor make sure you stay in the old town as the city on the outside is pretty uninspiring and you'll want to spend most of your time in the old town and its surrounds regardless.

We stayed in the Montenegro hostel and b'n'b which was $20 a night in the 10 person dorm. I recommend staying in the 6 person room if you wanna cook for yourself while you're there as the kitchen is in the other building with the 6 person dorms (so we had to move between the two… which wasn’t a big deal but it would just be better to stay in one place) this hostel was lovely, good kitchen facilities, comfy beds, shit wifi. 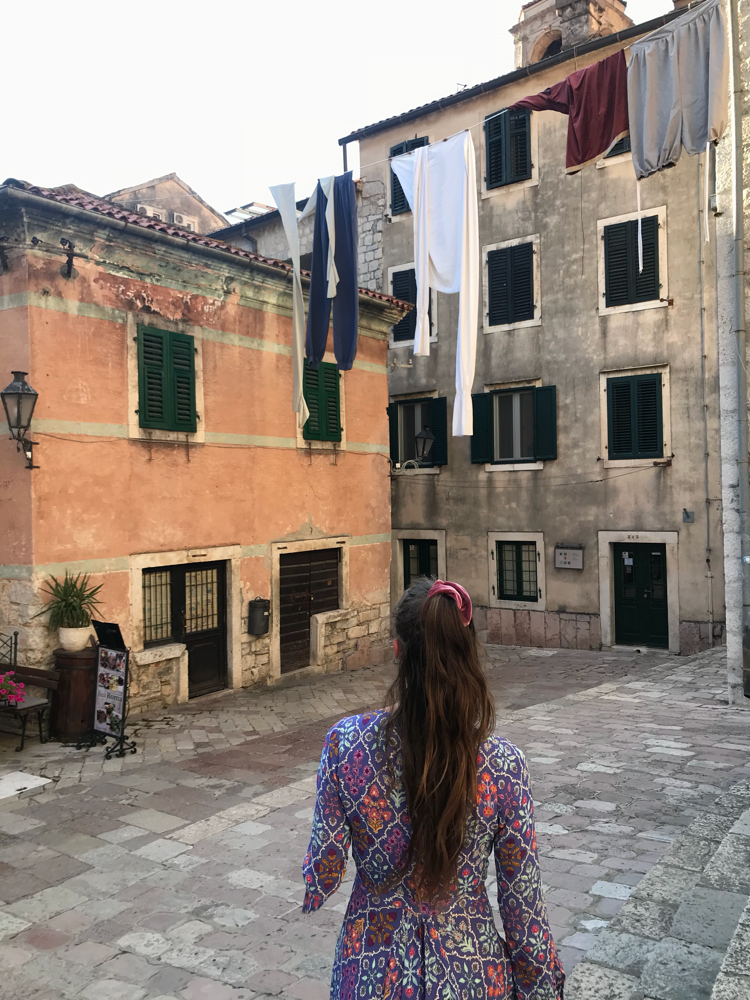 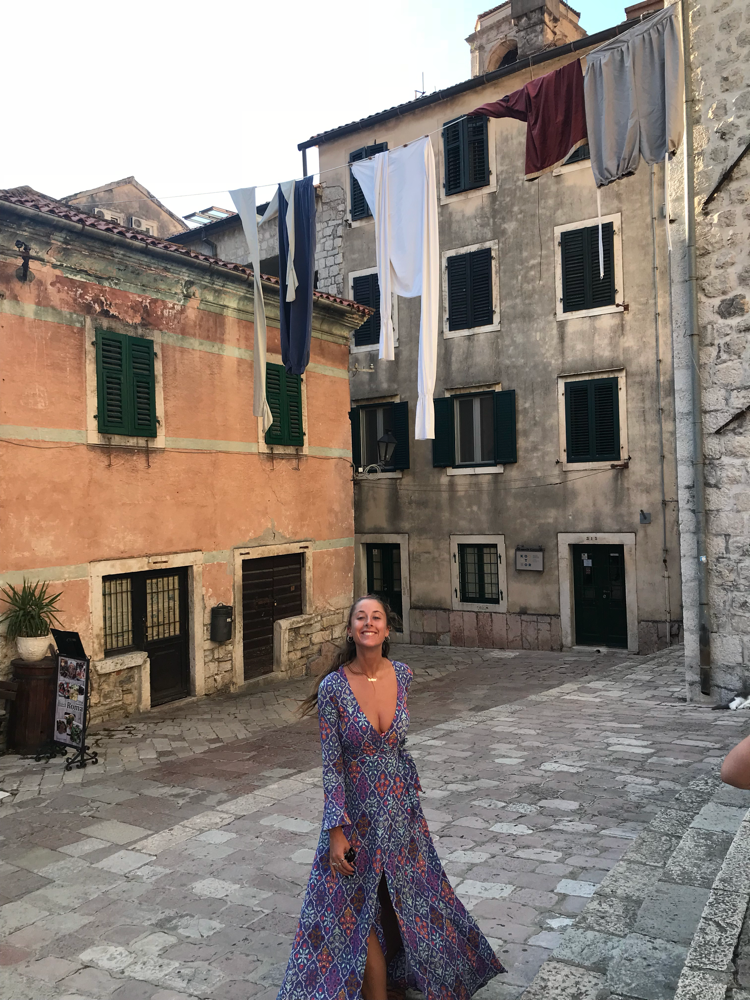 We got the bus for 4 euros to Budva on one of the hot sunny days we had in Kotor. Budva was a little average if i'm being honest. The old town is lovely and there were a few spots on the water that are truly magical with old cobblestone buildings and pebble beaches but its really, really touristy and once you’ve left the old town its all big shopping centers and shitty markets. The beaches here were SO crowded as they are covered in rent-able day beds (which were mostly empty). We spent about 6 hours in Budva, most of which was spent on the beach… you can pay 3 euros to get a ferry across to Hawaii island which is just off the main harbor but we couldn't really be bothered... We were pretty happy we had decided to stay in Kotor and not in Budva but its definitely worth the visit for  swim at the beach and a wander through the stari grad if you have the time!!! 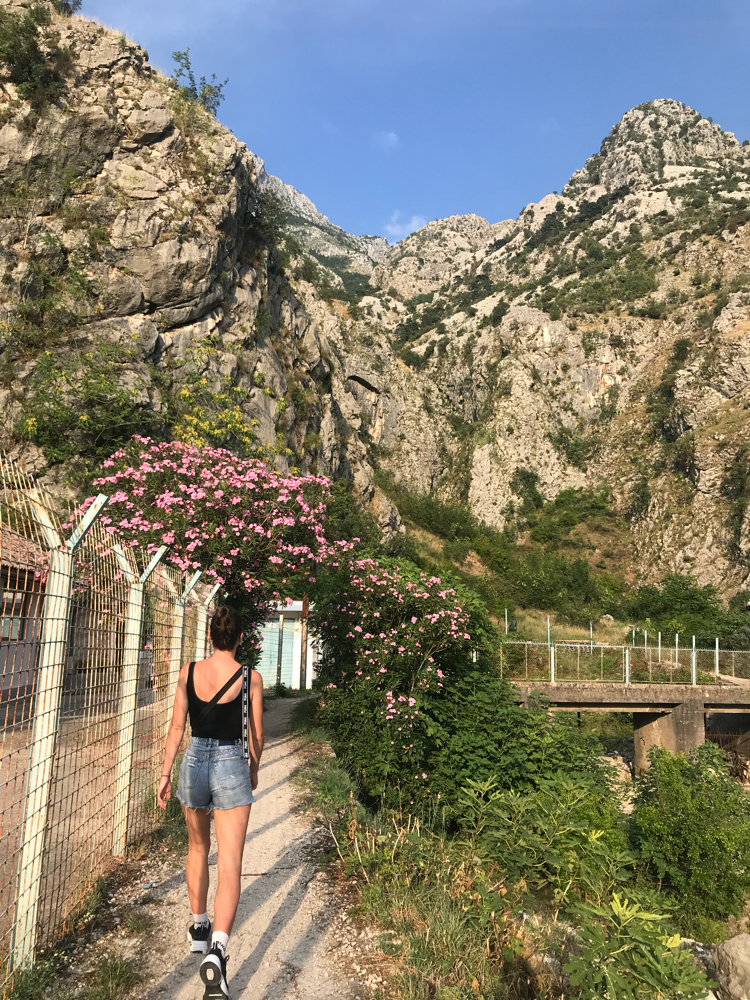 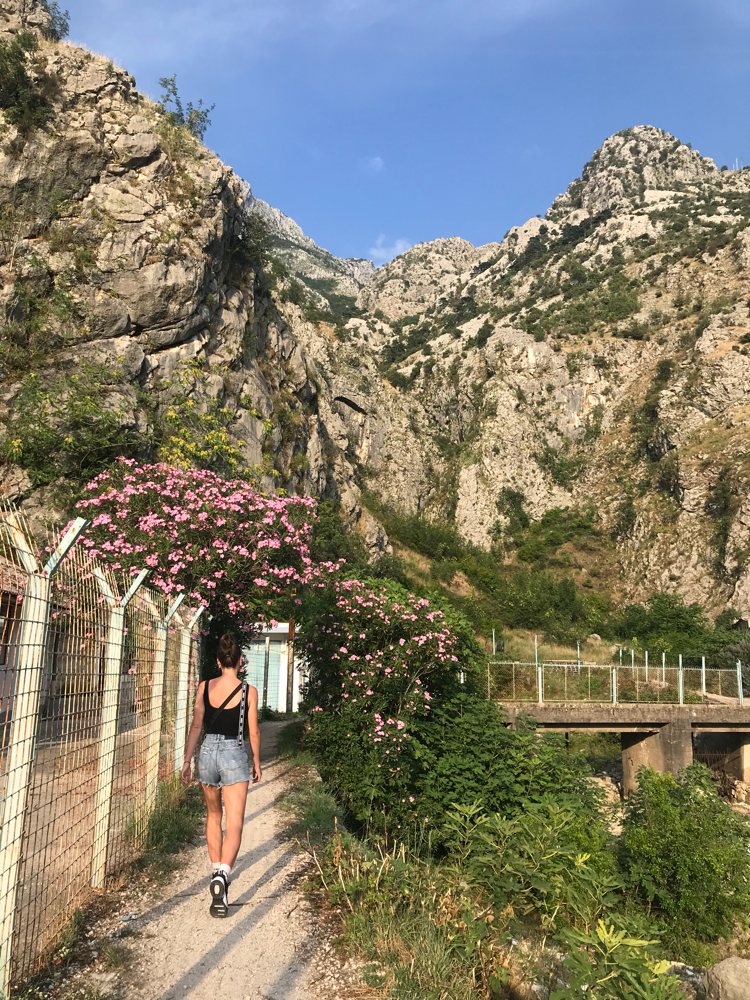