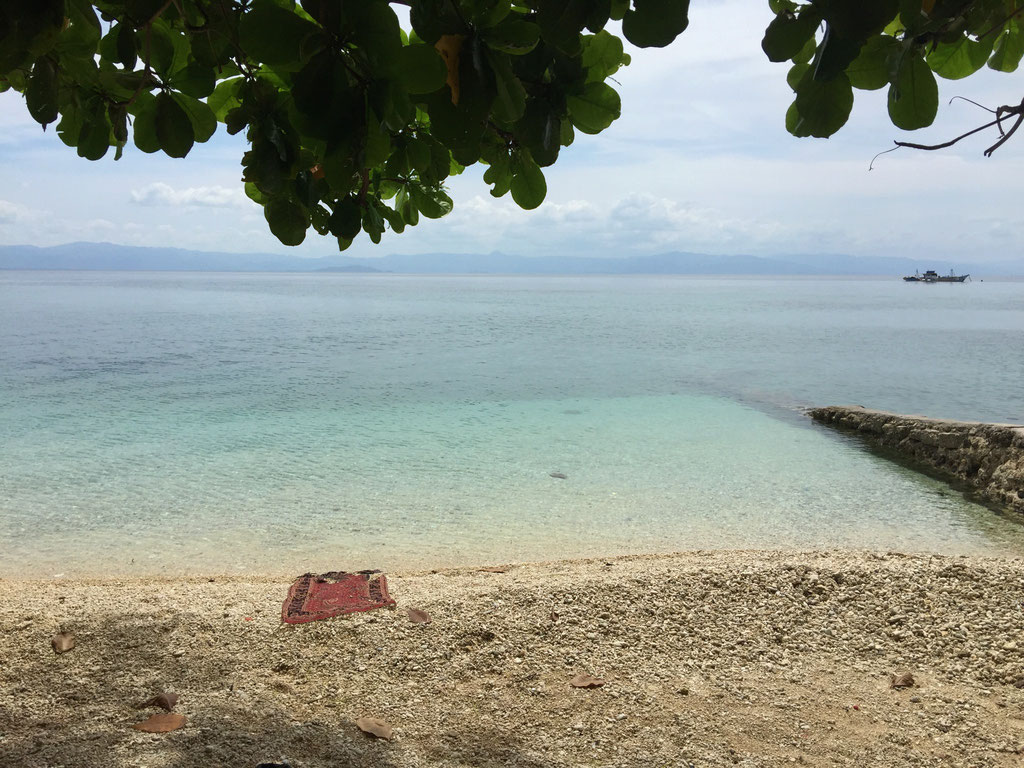 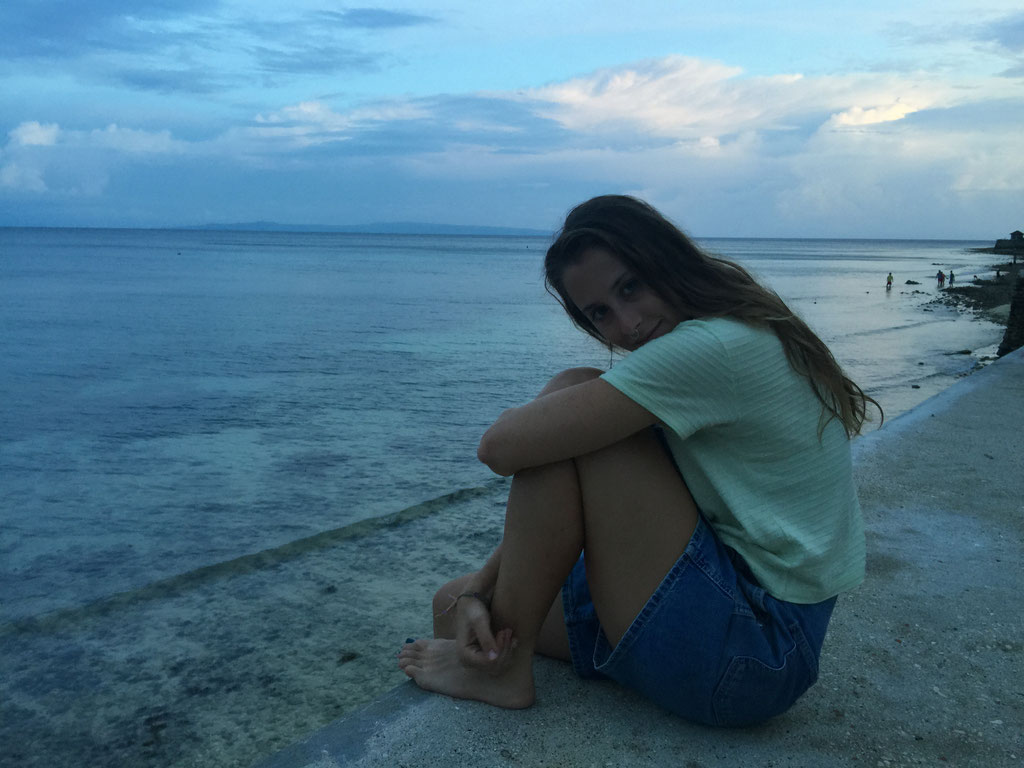 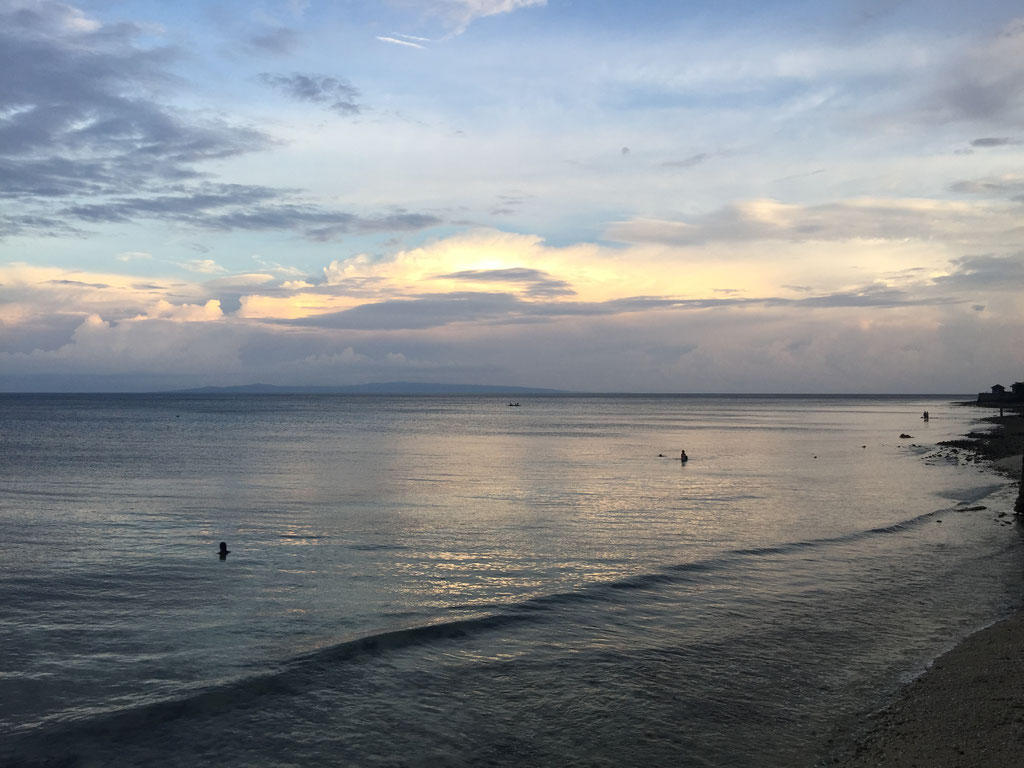 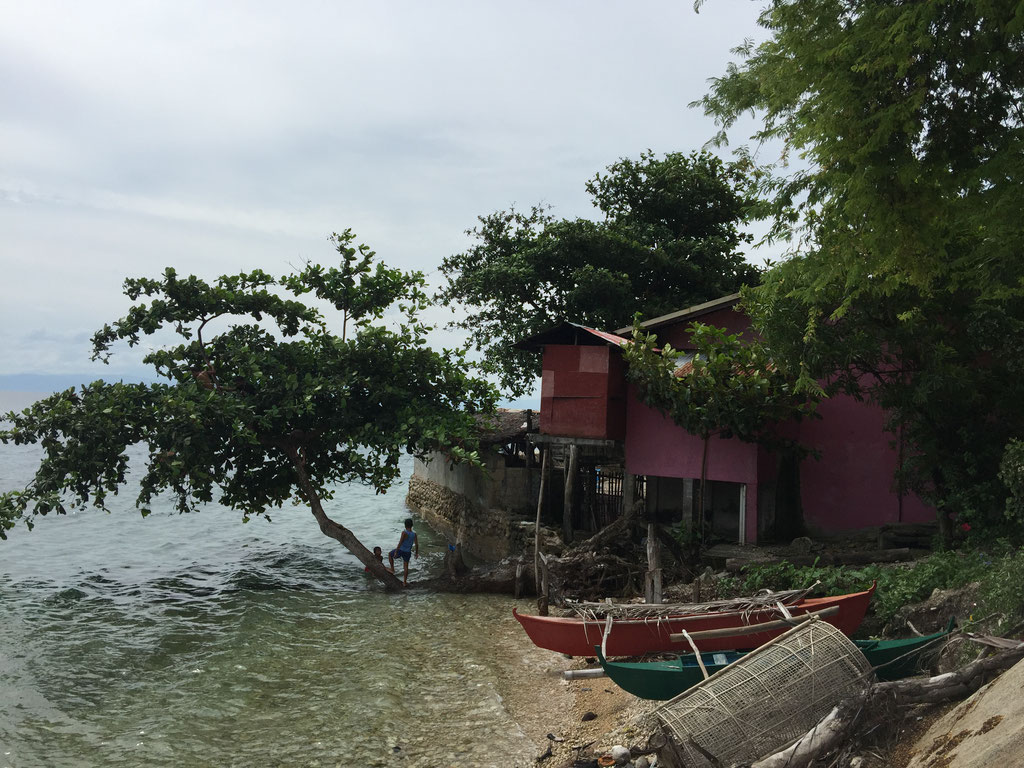 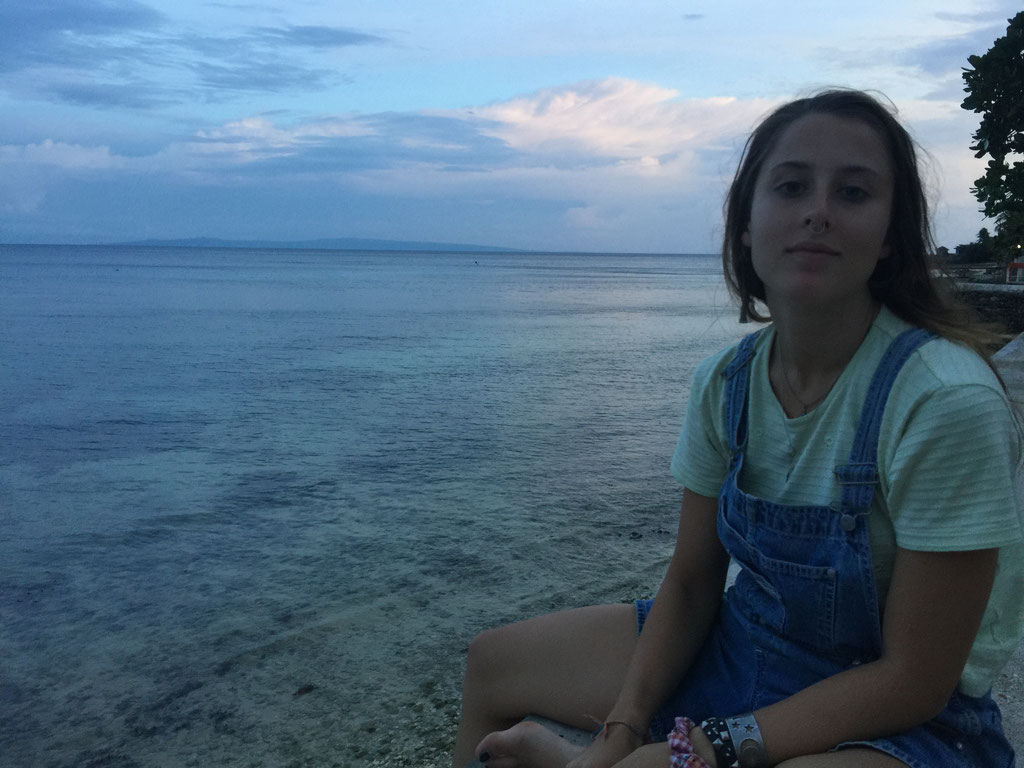 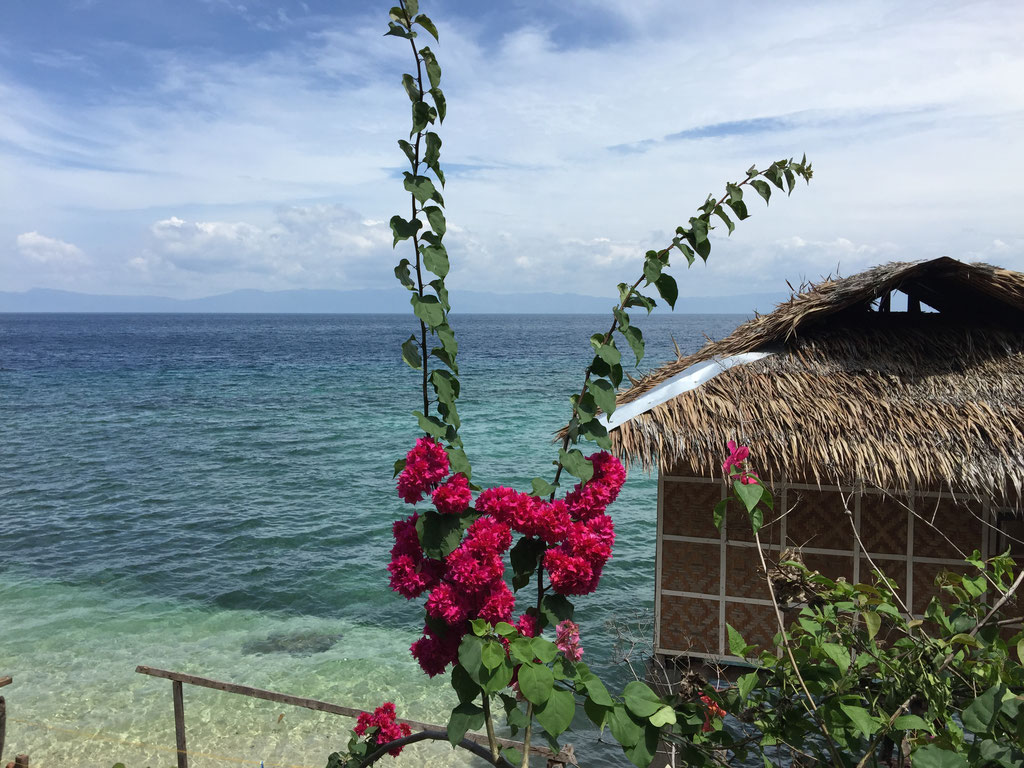 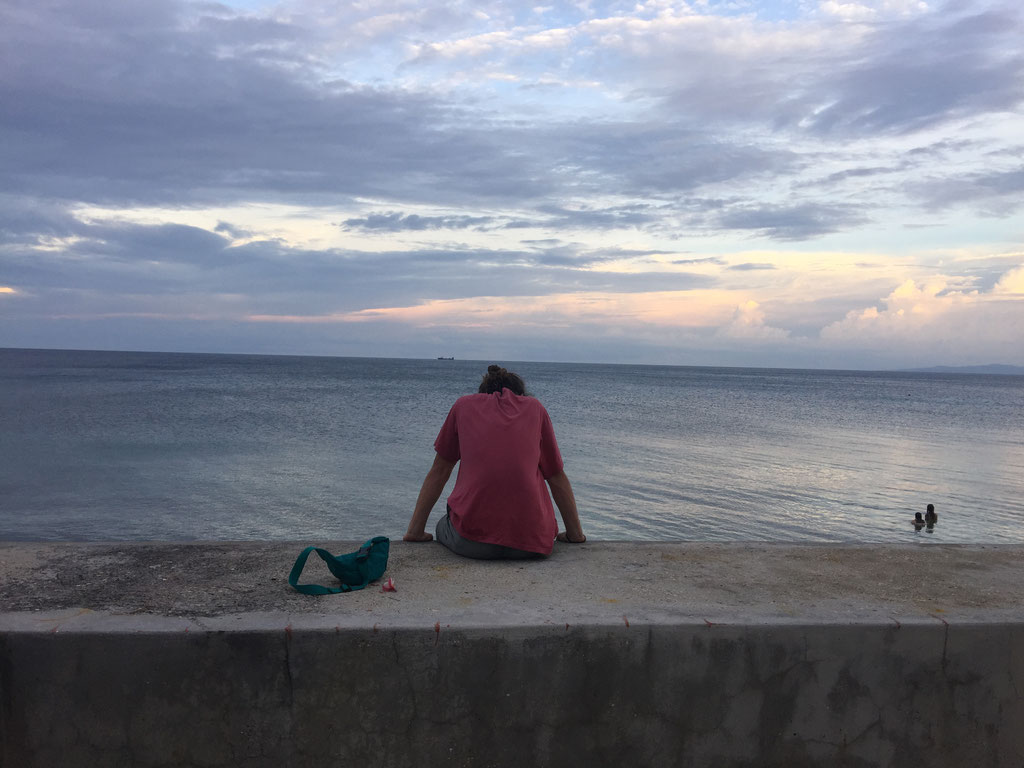 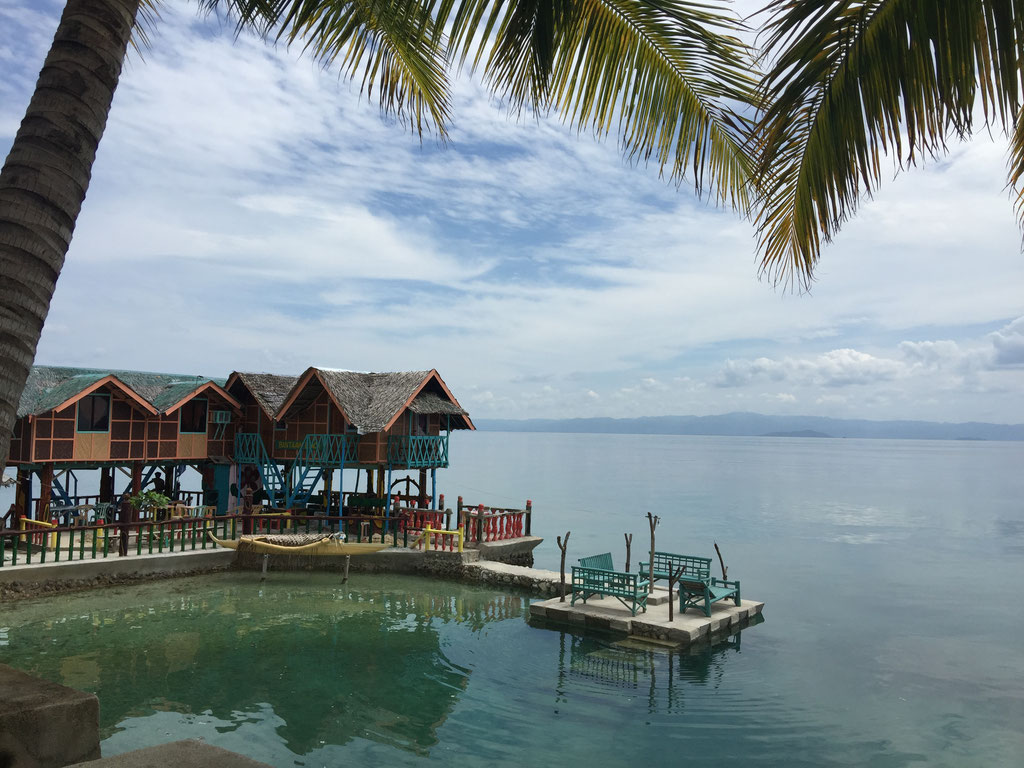 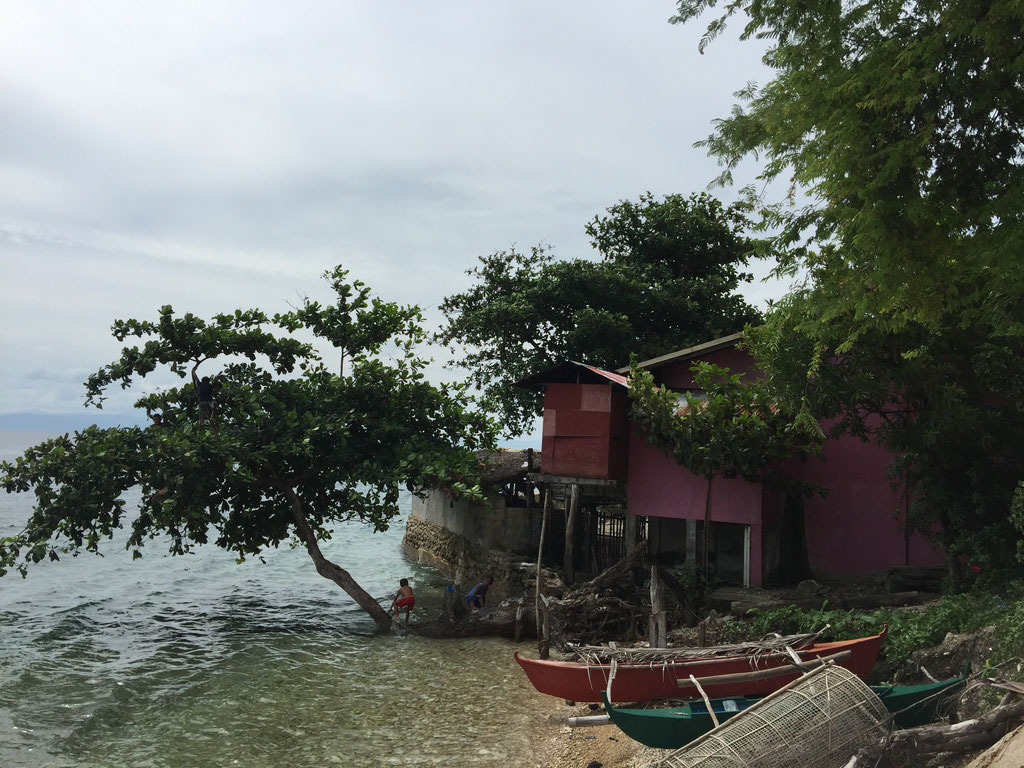 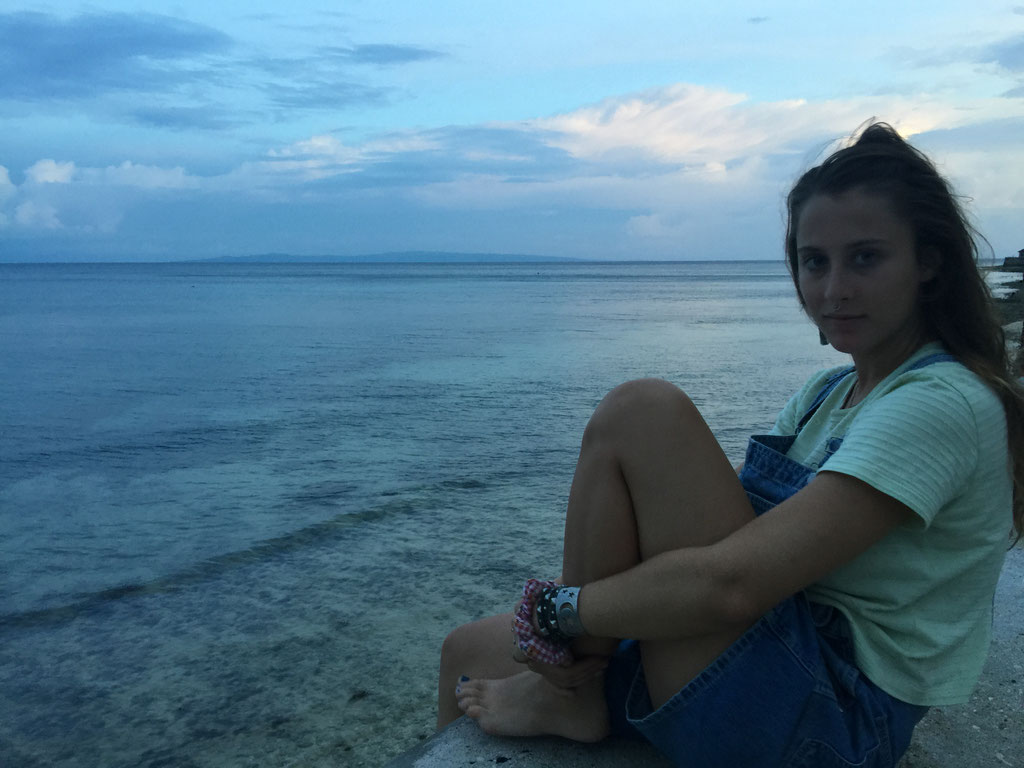 We arrived in Cebu at around 10:30pm after a horrific evening of delayed flights and no food. We got Jollybees for dinner (which I assure you doesn’t get yummier the more you have it) We got a taxi from the airport to our hostel which was a half hour drive and cost $8 (250 pesos). Make sure your driver turns on their meter because ours tried not to and was going to charge us double.

We were staying at The G&B hostel which I had booked on booking.com the night before. It was a pleasant place to stay for the price ($18 a night for both of us) and it had a 24 hour, mini supermarket underneath so the next morning I was able to get us some porridge and coffee using the boiling water and bowls that the hostel provided. We had a lazy start after a slightly uncomfortable, sunburnt sleep and then got the 06B jeepney from outside the hostel to the southern bus station. From there buses leave to Oslob and Moalboal almost every 10 minutes. We clambered onto a Ceres bus with a sign of Bato “via Oslob”  and paid 150 pesos per person (about $5) for the 4 hour journy to Oslob. I would recommend getting there really early to avoid the traffic heading out of Cebu city. We didn’t get on the bus until 10am and it took us an hour just to get out of the traffic on the city streets. The buses pretty much run all night so you won't have to wait around long or worry about a timetable. Both air conditioned and non-aircon buses ply this route and you may want to wait for an aircon bus as they’re much more comfy and the cost is only 5 pesos more. We arrived in Oslob at 3 in the afternoon and got off the bus a little bewildered and lost. Seeing as Oslob is such a popular tourist destination in the Philippines I expected the town to be a little bigger and more developed (not that i'm complaining, just surprised). There was only 1 or 2 restaurants/cafes and the whole town was situated off a 100 stretch of the main road. There was a local market that stunk of the rotting fish that filled its stalls and the only way to get anywhere was by tuk tuk or halal halal. We wondered around lost for about 20 minutes trying to find somewhere we could hire a motorbike for the rest of the day. We were unsuccessful and ended up getting a lift on the back of a motorbike to our accommodation which was a few minutes drive from town. We were staying in the --- in a small wooden hut with a fan and  balcony that cost $14 a night for both of us. We decided to unpack and relax for an hour or so and then headed into town for some dinner and to look at the markets. I was getting a really bad cold and wasn’t enjoying wondering around the dusty streets so after dinner/lunch we headed back to our hotel and watched sunset from the brick wall that rimmed the hotel. It was a beautiful sunset of pinks and purples that spread over the still expanse of water. We then had an early night because we had to be up at 5am for the whale sharks the next morning.

We booked our 'tour' through out hotel and it cost us $30 each including a transfer there and back and the boat to take us out to where the whale sharks were. We definetly could have got the price down to $20 each but we were both too exhausted to argue and it would have only saved us $10 each. 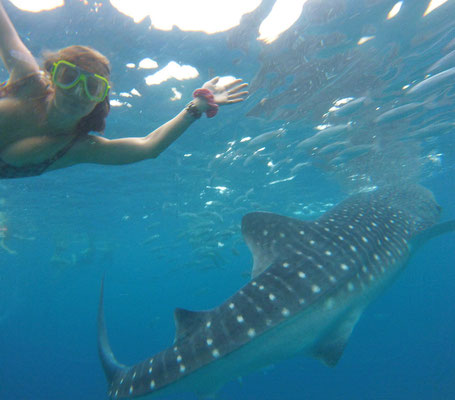 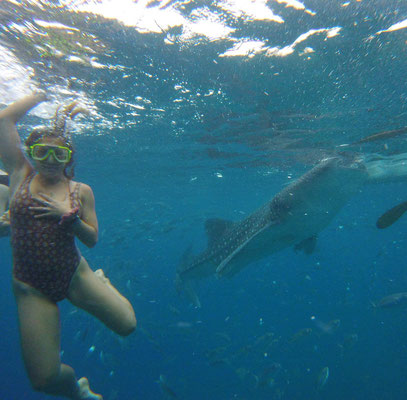 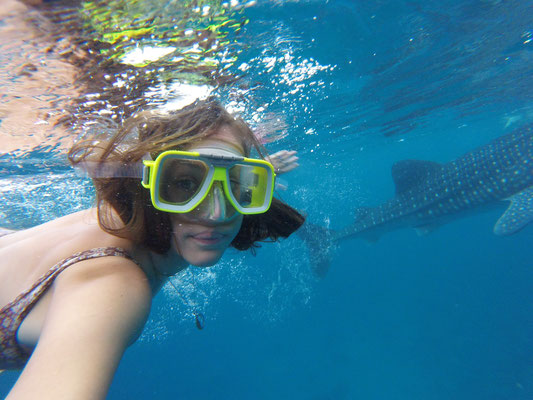 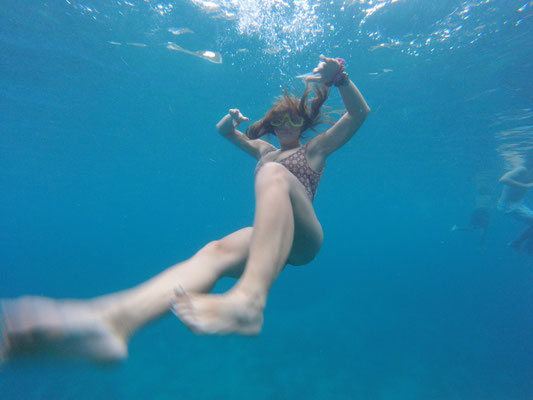 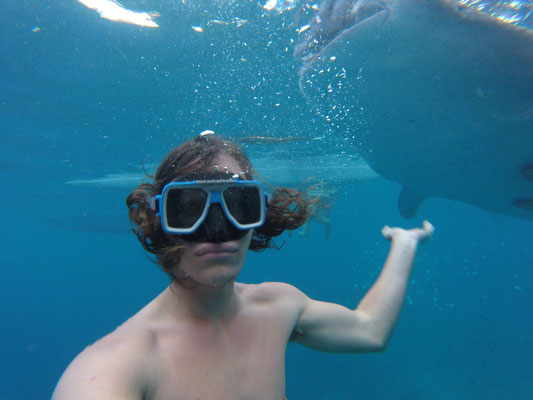 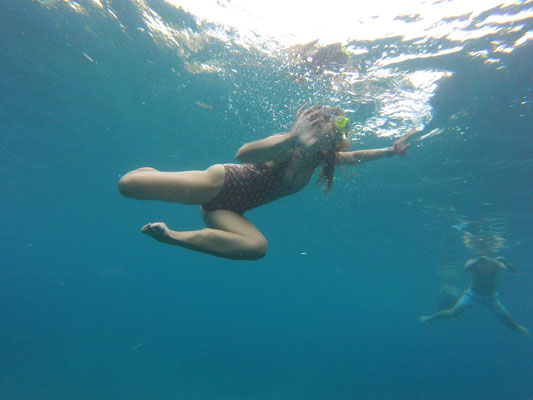 The next morning we woke up at 5 and put on our swimmers. The company picked us up on a motorbike and took us to the whale watching center which was about 15 minutes out of the main town. We then, along with at least 50 others, got on a small wooden boat and were taken about 100 meters from the shore. I was shocked at how many whale sharks there were as I spotted at least 4 within the first 2 minutes. I was incredibly hesitant to get in the water as in recent years i've developed a really shit and irritating fear of the ocean for absolutely no reason, but after everyone had jumped in I convinced myself it was fine and jumped in. The water was so clear you could see the bottom even though it was at least 12 meters deep. We swam and snorkled around for half an hour or so, surrounded by schools of colourful fish and the huge whale sharks. It was pretty surreal. On our way back to our hotel we stopped at one of the bread shops in town and bought some bread for breakfast. Bread shops are ridiculously popular in Cebu and you won't pass through any town without seeing at least 2. In the city every third shop is a bakery. The bread is incredibly sweet, almost pastry like, often with swirls of sweet potato dough or sugar through it. Some of the bakeshops also sell pork and eggs buns for 50 cents each, something which Ebbs and I thoroughly took advantage of. We got back to our hotel by 8 and packed our things, ready to spend the day jumping on and off the Cerus buses in search of waterfalls, aiming to end up in Moalboal by mid afternoon where we would be staying the night. As the buses come every 10 minutes we weren't waiting long and you don’t have to go to a bus stop, just stick your hand out on the side of the road and it will stop. It cost us $1 each to get to Bato where we then swapped buses to continue up the west coast of the island. We stopped in Gitalian to go to the Inanbakian falls which I could not recommend enough. When we got off the bus a man offered to take us there along the 4km road and strapped all our luggage to the side of the bike. It cost us just under $2 return and he waited for us at the other end while we walked down to the waterfall. There was an entrance fee of 70 cents per person which was obviously worth it. We spent about an hour and a half swimming and exploring around the waterfall which was a vibrant blue colour, so bright it almost glowed. We had the whole place to ourselves as well which was super special. We planned on backtracking to some other falls that we had passed on the bus but I wasn’t feeling well and it was a little annoying travelling with all our luggage so we headed up to Maolboal on the bus. It cost us $1.50 and we arrived at around 3pm. From the main town we got a tuk tuk to our acommidation which was 5 minutes away. We stayed in a place called Johnills Tourist Inn which wasn’t anything luxurious but was $19 a night and had a small kitchen and sitting area. We managed to find a place called Rossetas Homestay that hired us out a motor bike for $7 for 24 hours. We then road into town and went to the supermarket and bought some noodles and porridge and then got dinner in one of the cafes for $7. Ebbs got a pizza and I got noodles and a mango juice. We then went and watched the sunset from the beach at the end of our street and headed home to bed as I was convinced I was coming down the the Dengue Fever I felt so sick. 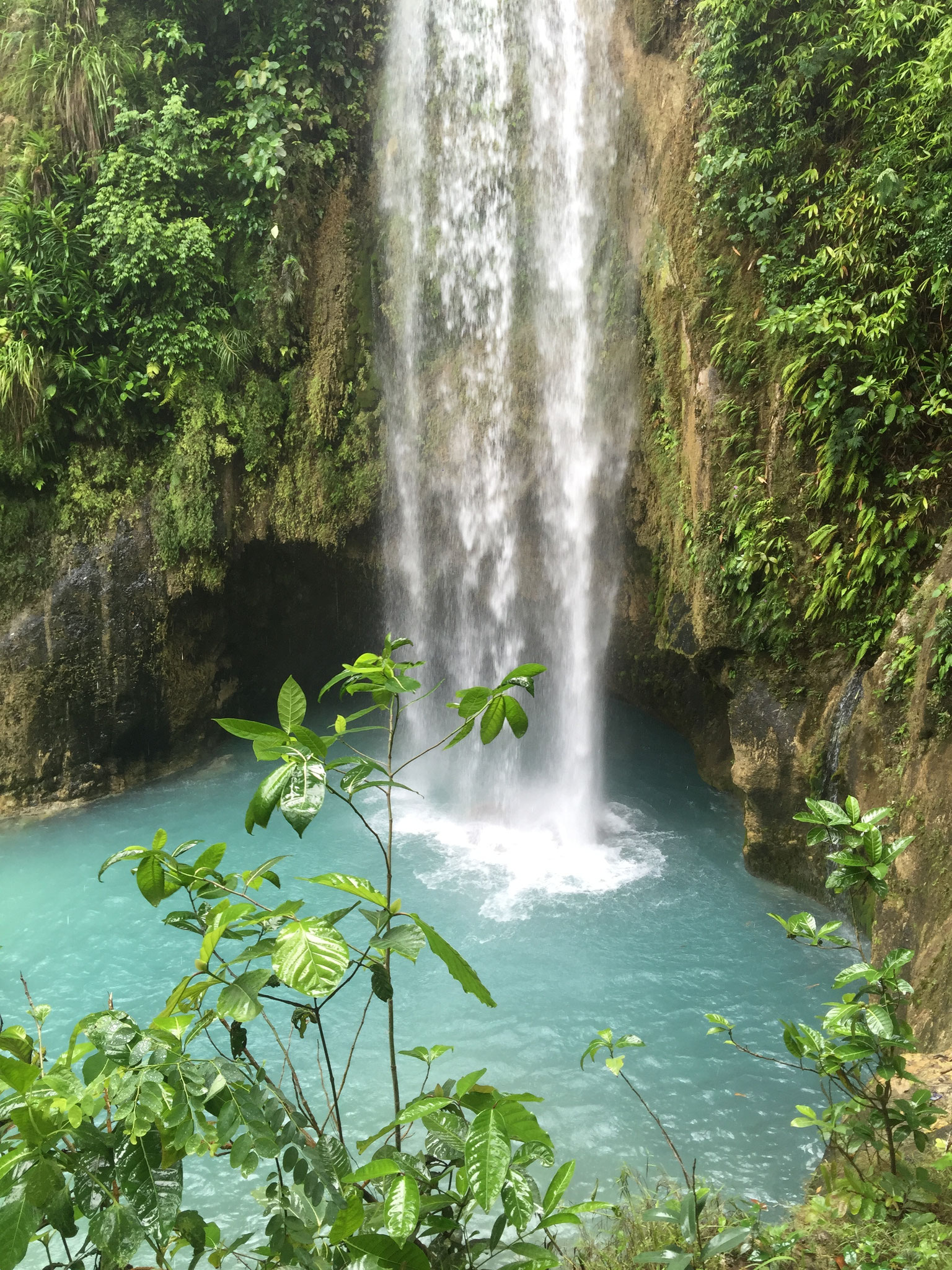 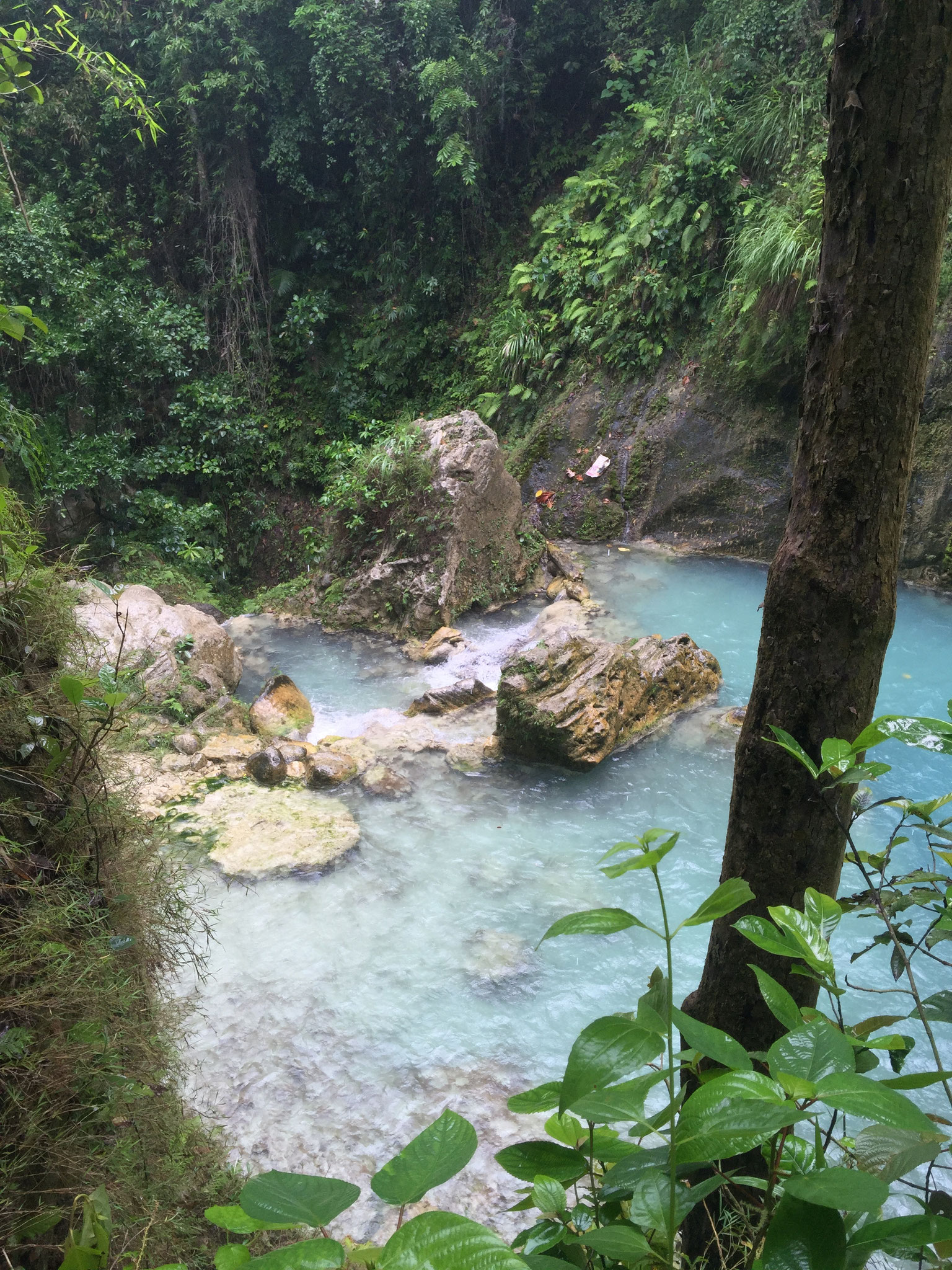 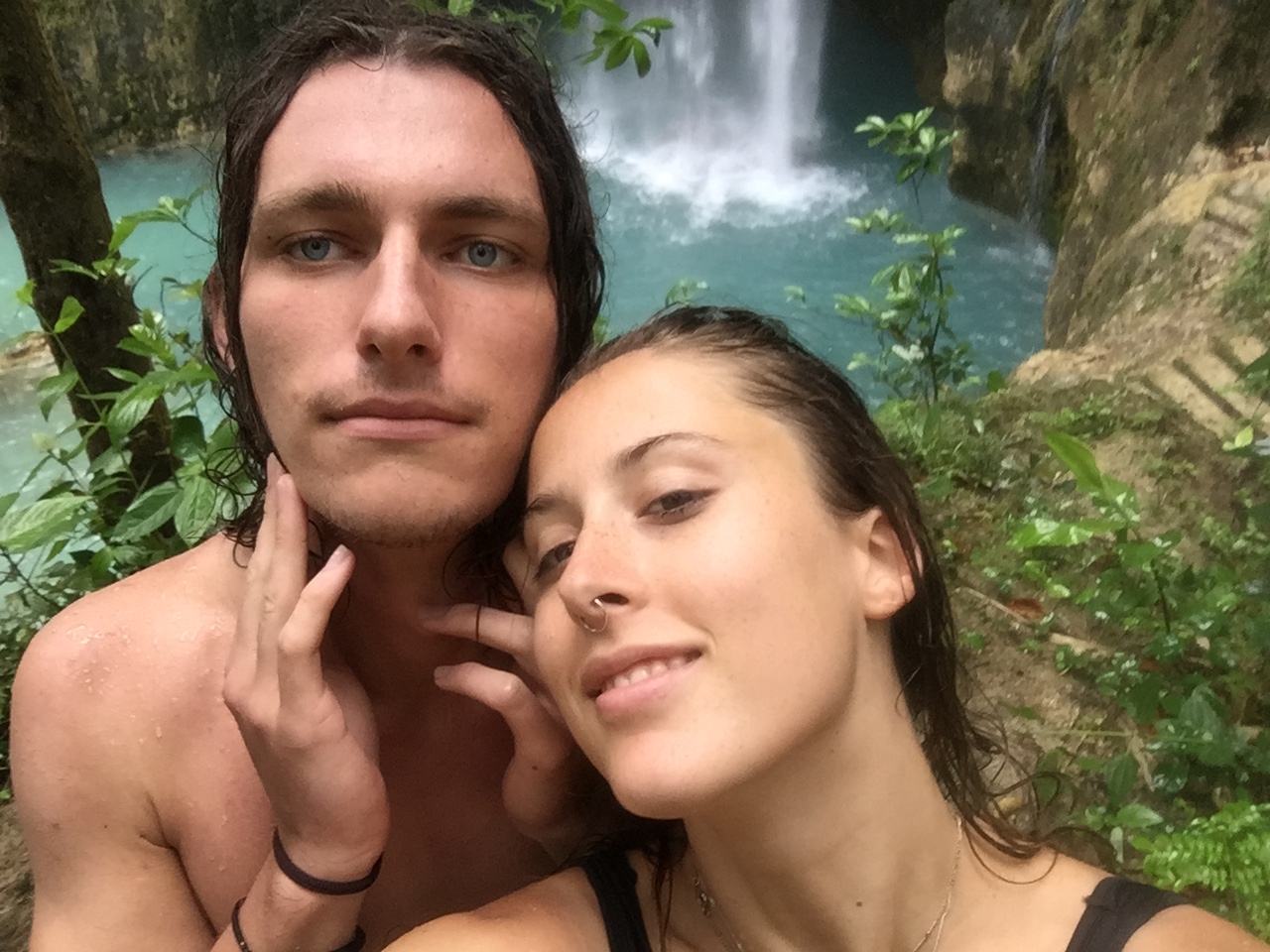 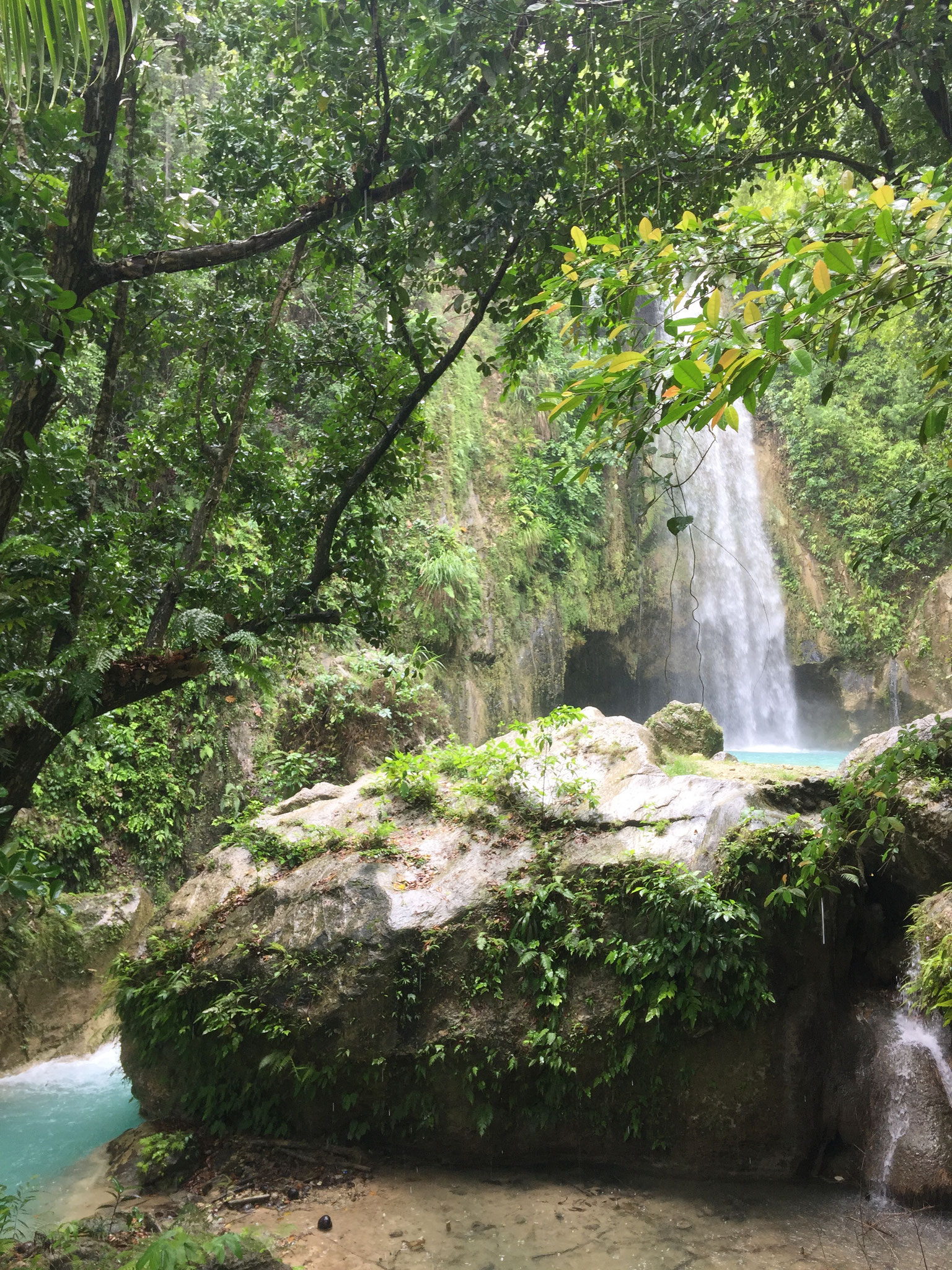 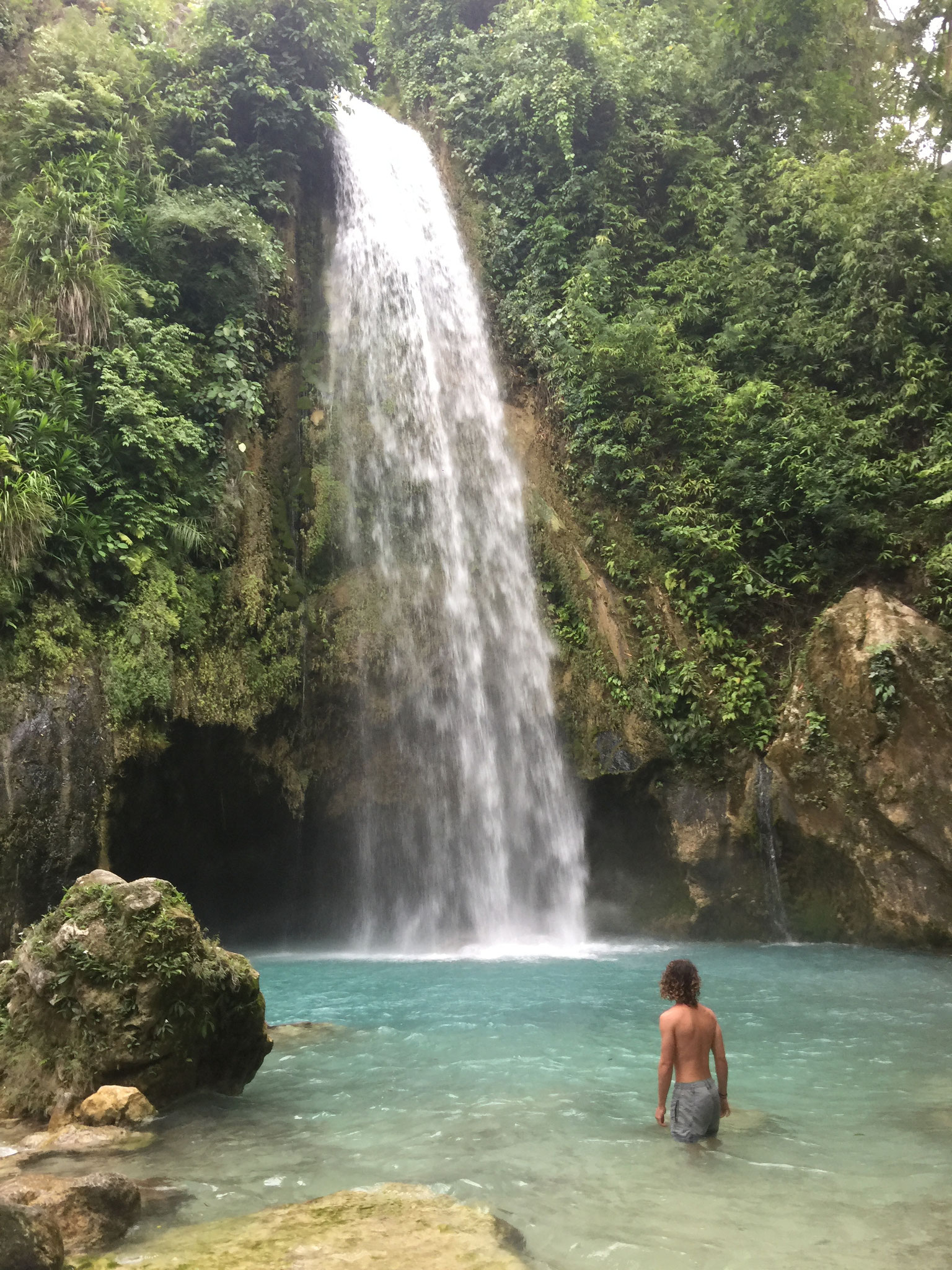 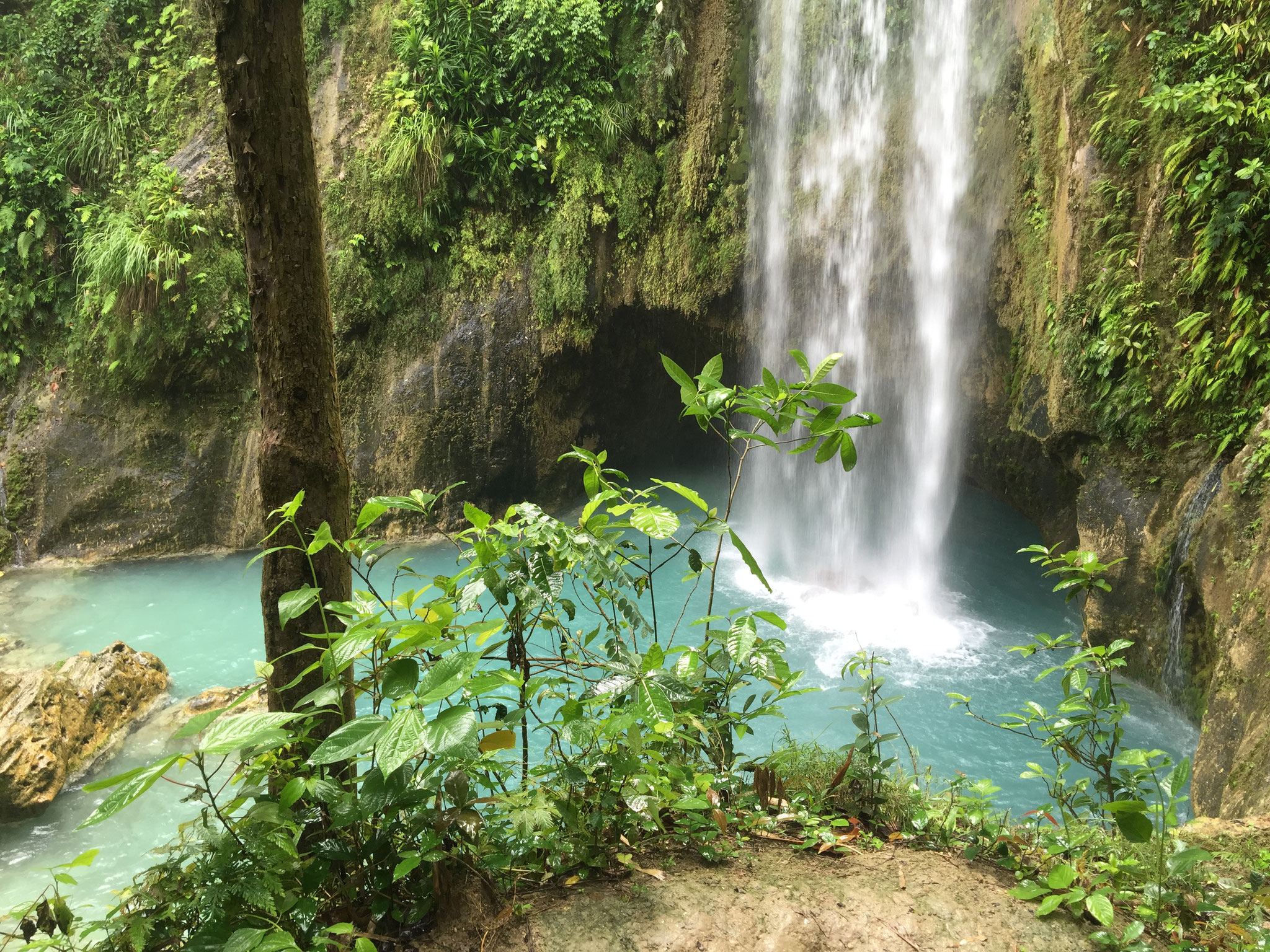 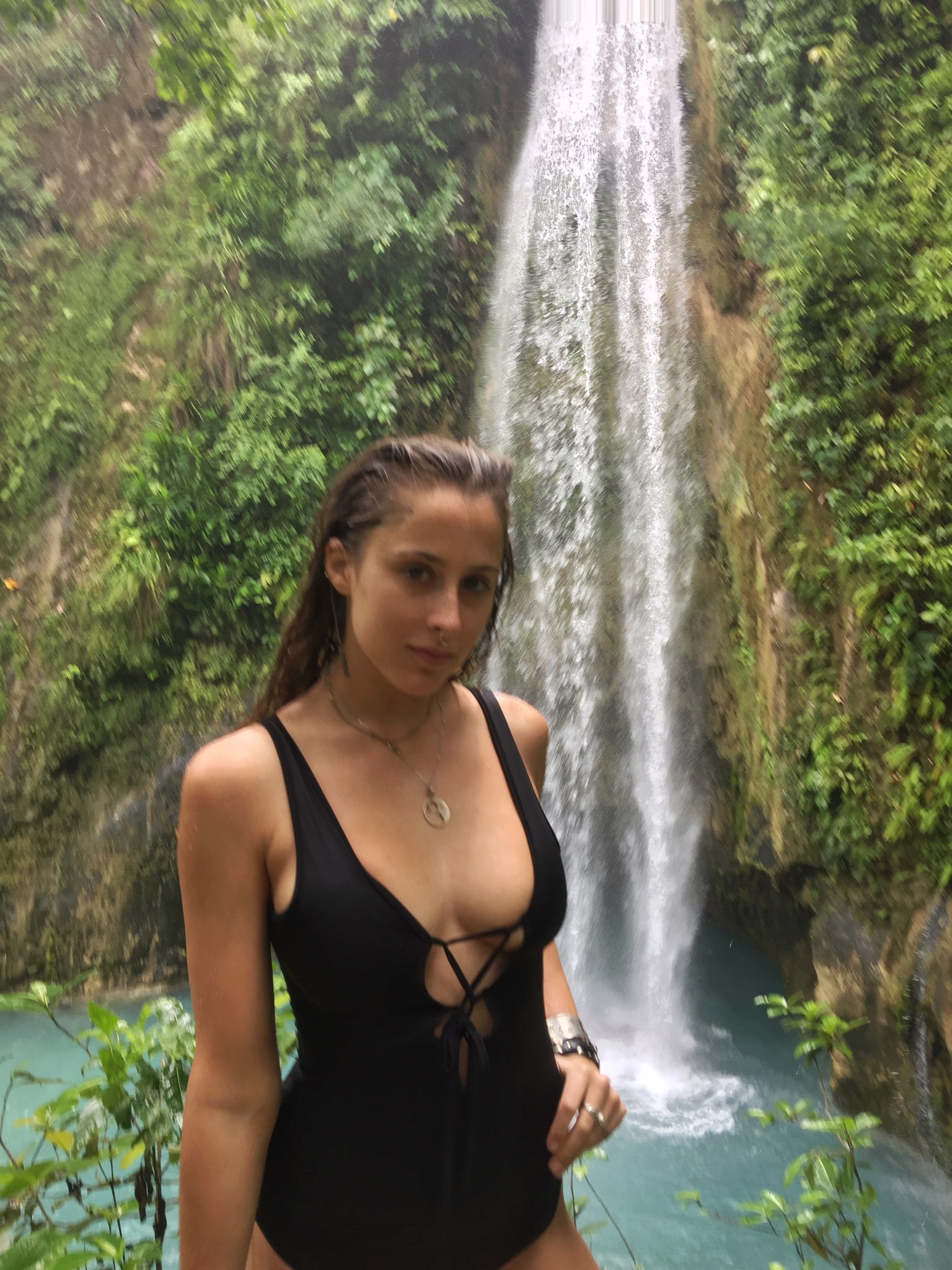 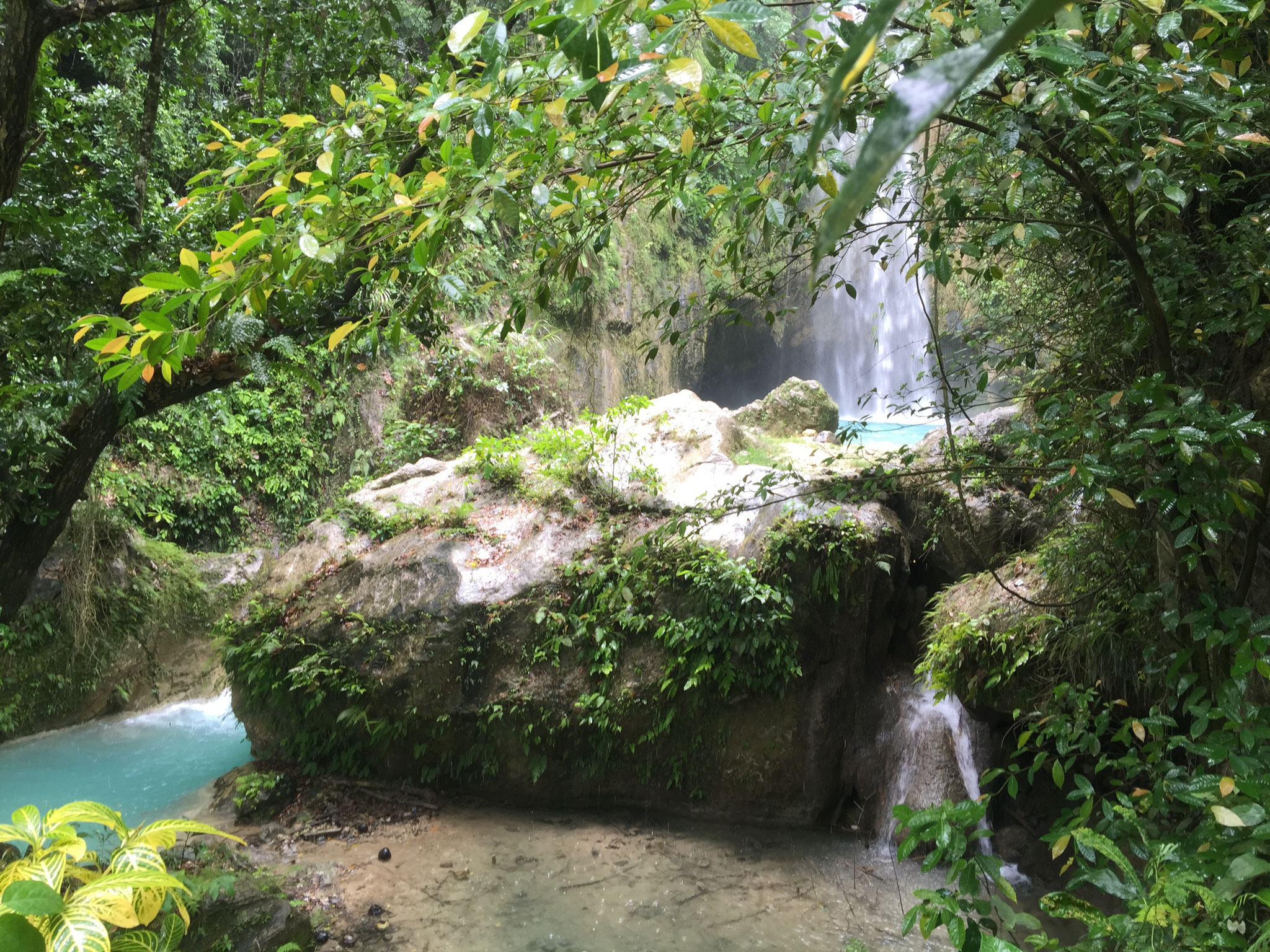 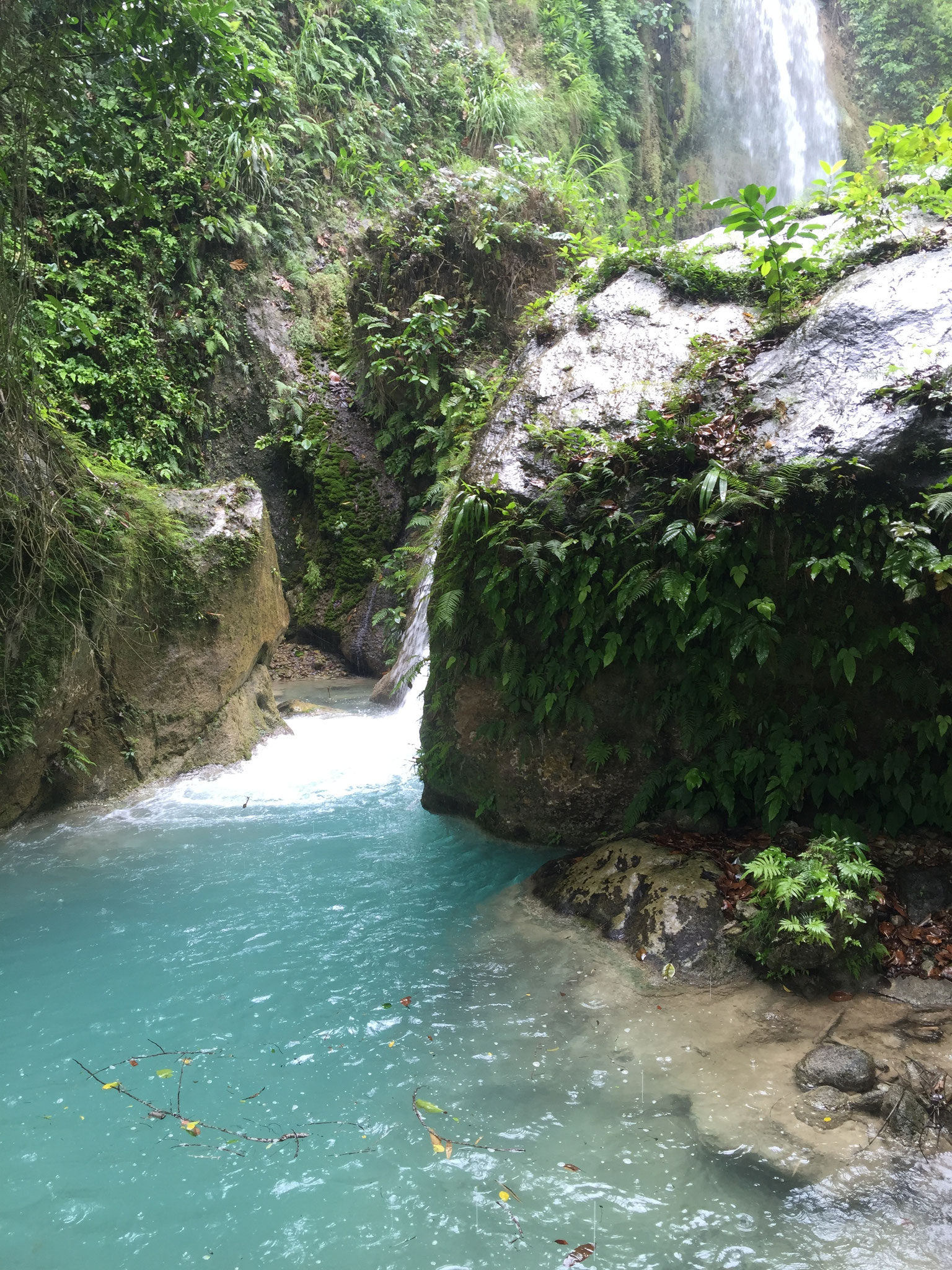 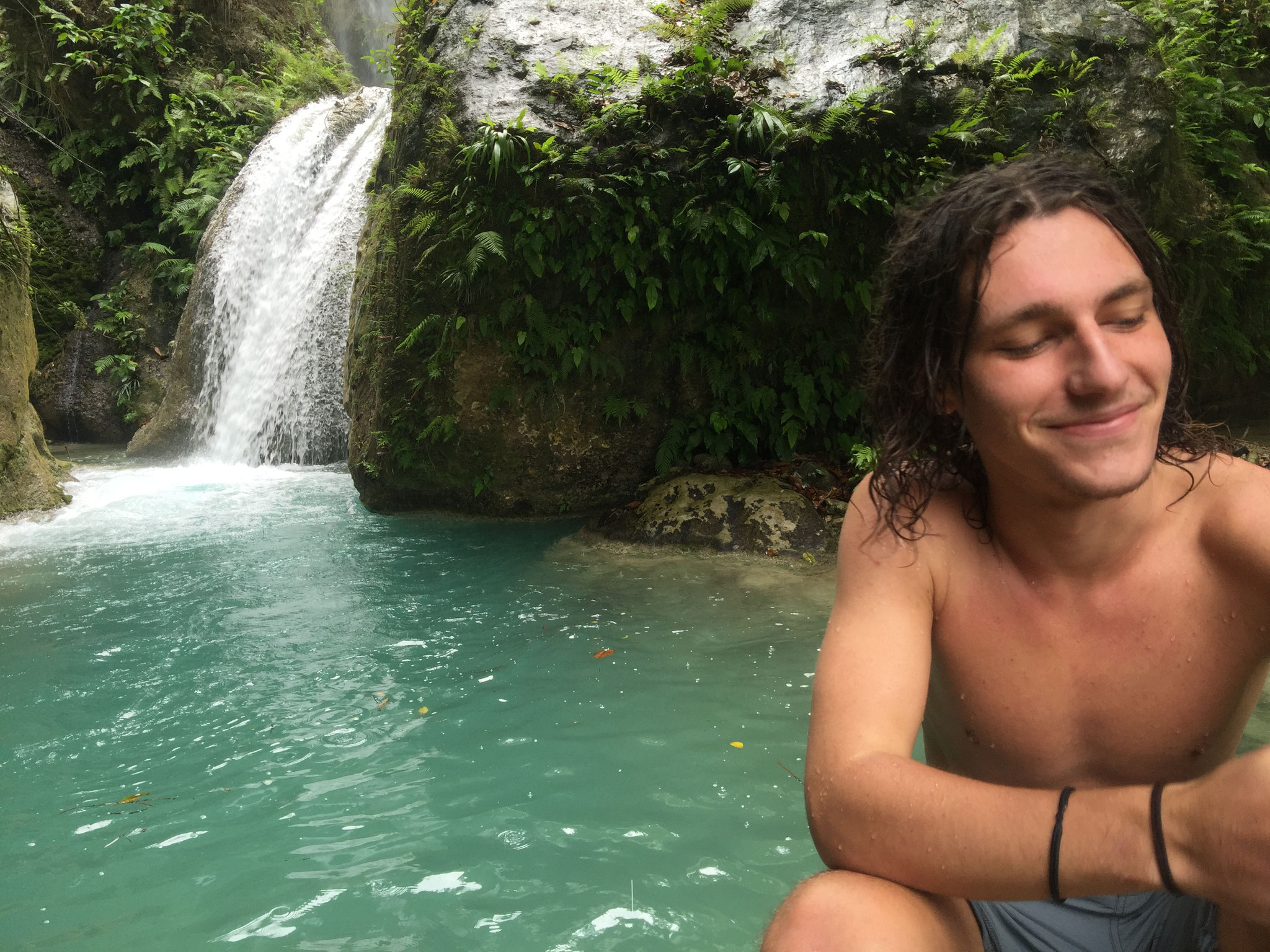 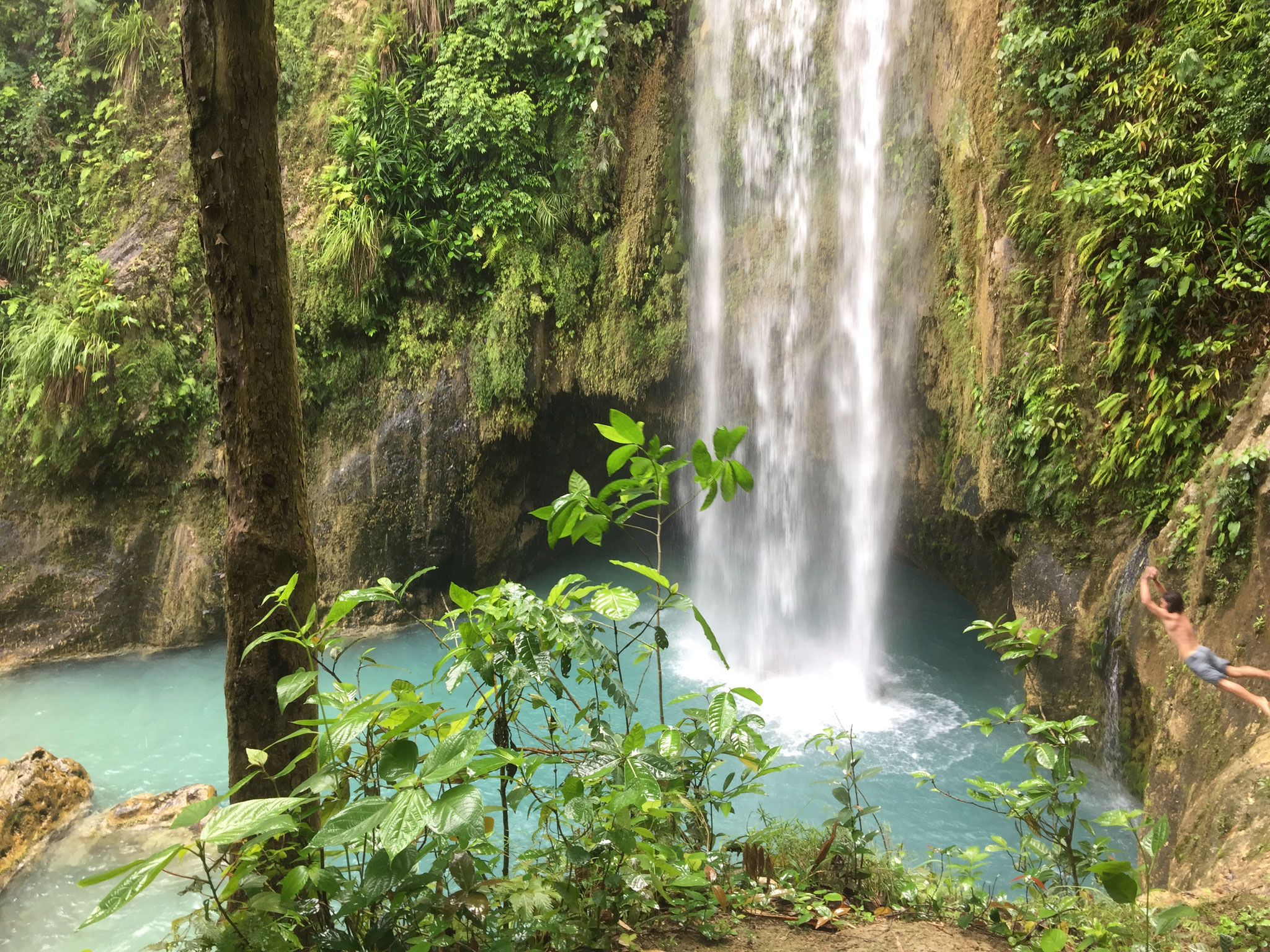 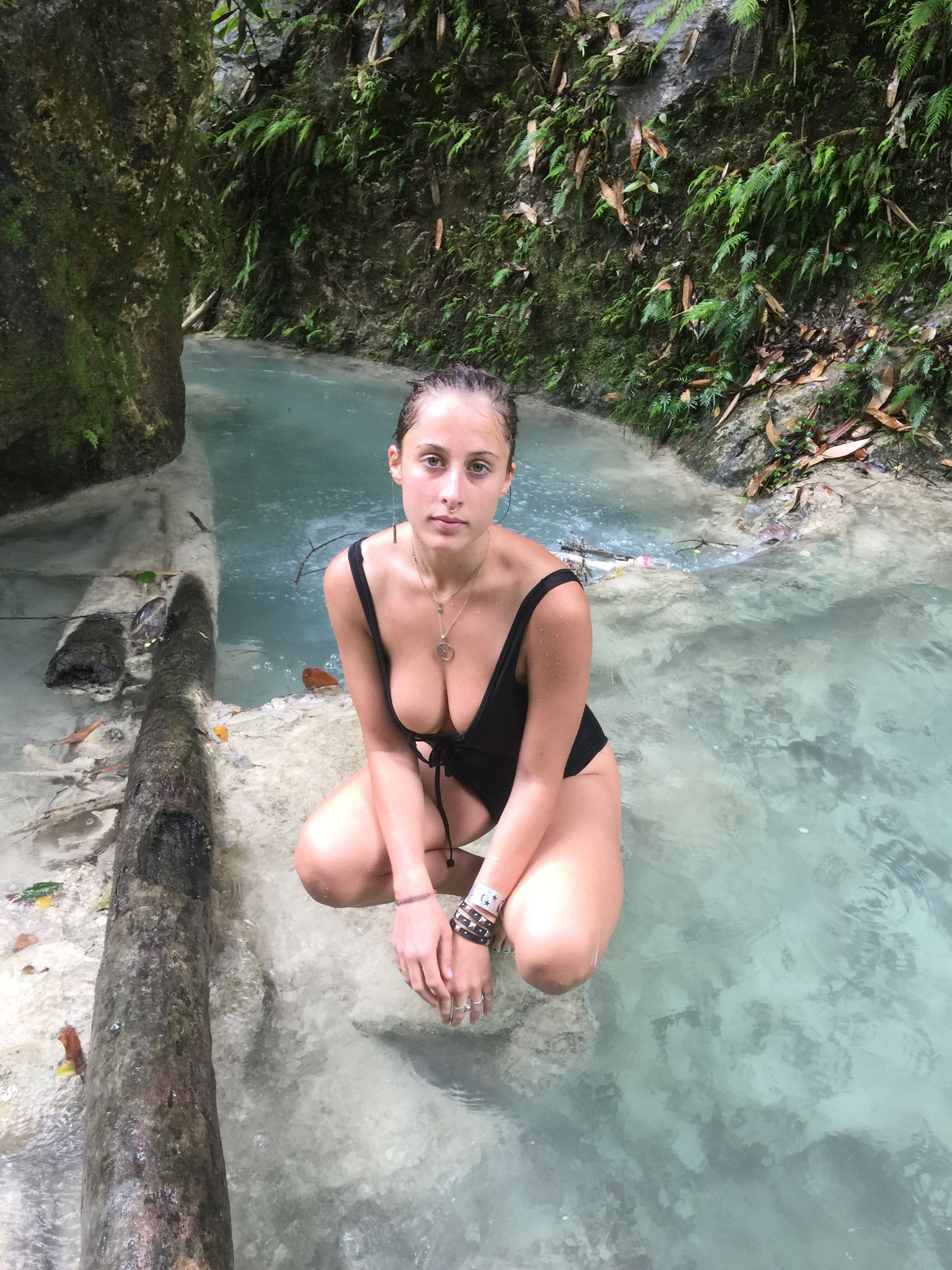 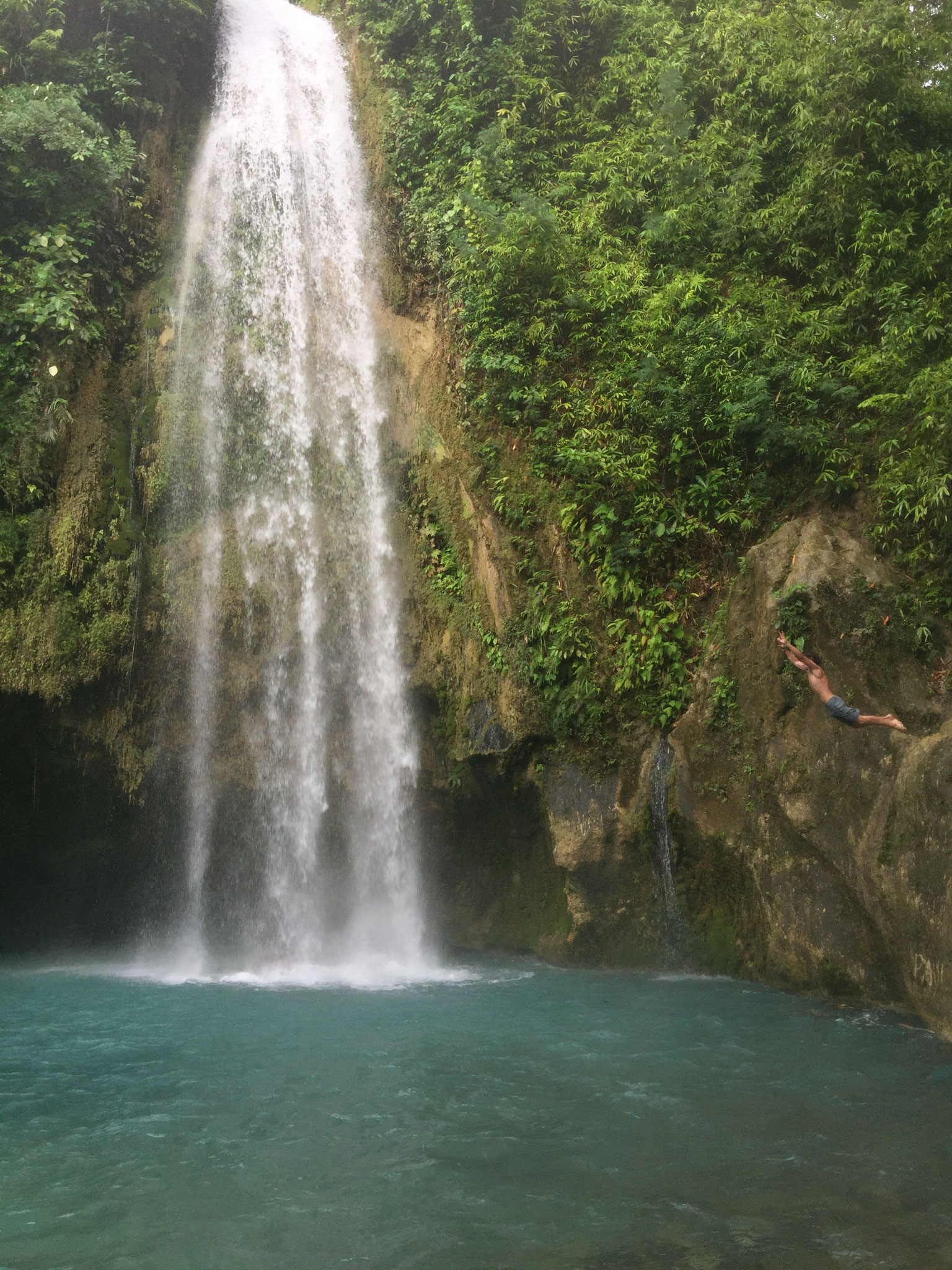 On our third day we went to Kawasan falls which I have written about on a separate post. It was 4pm by the time we were on the bus back to Cebu City which cost us $4 each. The journey was about 2 hours but was a little slow at the end because of the traffic in the city. We went back to the same hostel we had stayed at on the first night called the G&B hostel and I had instant porridge for dinner and watched workaholics before going to bed. We had to get up at 4 the next morning to get to the airport because our flight from Cebu to Manila was at 7. We got a taxi at 4:30 for 250 pesos ($6) and arrived with ample time for our flight. We flew from Cebu to Manila and then Manila to Kuala Lumpa and then from there to Bali. Kuala Lumpa airport was super nice and we had a delicious Indian meal for lunch/dinner for $5 each while we waited for our flight.